With our live aboard crew safely tucked away on their boat, expectations were high for the the three days of scheduled training.  Unfortunately, what our crew learned is they had more work to do before they were ready to go anywhere.

Captain Chris and Alyse showed up on Tuesday, June 23 to start the learning process.  The Captains spent a day and a half with our crew teaching basics and fundamental skills needed to safely navigate the U.S. Waterways.  However, they also discovered a few items that needed to be corrected before the grand adventure.

To assist with the needed repairs, Captain Chris contacted Captain Geoff Gow.  Geoff arrived onboard Wednesday, June 24 and went to work correcting the issues.  He provided lessons in marine maintenance to our new owners as they worked to get the vessel in the best shape possible for the upcoming adventure.

I heard the ‘would be skipper’ say something about the steep learning curve being steeper than the Black Canyon of the Gunnison.  He went on to described that the canyon was so steep that he could touch the canyon wall with his hand while standing.  Sounds like climbing a 2000 foot ladder.

With the repairs complete, it was time to turn the book knowledge to actual hands on training.  The first passage would be from Sweetwater Landing to Roland Martin Marina near Clewiston, a trip of about 70 miles.

The passage is on the 140 mile long Okeechobee Waterway.  Traveling east, there are three locks that raise you from sea level to Lake Okeechobee level.  Then two locks that lower you back to sea level.

Saturday morning started by some more training by Captain Geoff and then the first maneuver of leaving the slip.  Claudia did well handling the lines and getting the gear stowed.

The next test was negotiating the W.P. Franklin Lock.  Luckily our new boater’s were the only ones locking thru.  With the assistance and constant coaching from Captain Geoff ( port ahead, starboard aft, both neutral, port ahead, etc, etc, etc.) the ‘would be skipper’ managed to position the boat next to the lock wall where Claudia was able to grab a line and secure the vessel.  All with no boat damage, imagine that.

The lock master closed the gate flooded the lock and the boat floated up about three feet.  With the gate open, more constant coaching from the Captain, Still Waters II safely exited the lock with her crew in tow.

The crew then managed the Ortonia lock and then finally the Moore Haven lock.  By the third lock this crew actually looks like they know what they are doing. During the approach to the marina, a huge storm blew in. High winds and a down pour so bad you could hardly see out the front of the boat.  Did you order this Captain Geoff for our viewing entertainment?

Luckily the rain let up just as the boat approached the marina.  The crew was welcomed by a very enthusiastic bunch along the pier cheering the arrival of Still Waters II.  Our ‘would be skipper’ maneuvered the vessel into her spot along the pier and Claudia with a little help from Geoff got her safely tied up.

Day one is complete and by the looks of the crew, they look pretty spent as well.  Who needs a gym membership when you can lug lines, fenders, and other material all day.

Day two will be a 50 mile run to Stuart, Fl and entail crossing the 25 mile wide Lake Okeechobee, two more locks, and then into the St Lucie River, a U Turn onto the the actual Atlantic Intercoastal Waterway, and finally arrival at the Hutchinson Island Marriott Beach Resort & Marina.

The day turned out to be similar to the day before except when they entered the St Lucie River and the water went from being > 10 feet to less than 6.  Did I mention that the vessel has a draft of 3 ft 9 in.  That is not much water under the vessel, and gave our ‘would be skipper’ more than a few moments of sphincter muscle constriction while floating past places less than 5 feet deep.

But hand it to Capatain Geoff, because he took this time to pass on a little tip of wisdom……..if you hit something, just keep in mind the thumb rule of $1K for each knot of speed for the repairs.  Just go slow.

I think I overheard a thank you in there somewhere from the ‘would be skipper’, but he looked pretty focused as he was negotiating the vessel thru the shallow water.

As they were making their final run towards the Marina the wind really began to kick up again.  At the final approach to the Marina, our ‘would be skipper’ handed the helm back over to Captain Geoff who graciously accepted the challenge of backing the boat in slip 16. 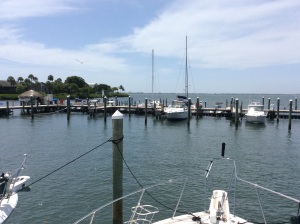 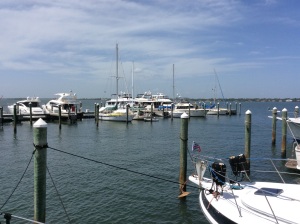 The crew will be in Stuart to complete final maintenance checks and install a new AC system onboard. That will take them past the July 4th weekend, so it looks like it is time to relax and sight see Stauart, Fl.

← Honey, Who Shrank the Boat
I survived →