Eric here to bring you up to date on the goings on of our crew.  More specifically, about two shore excursions they have made during their stay in Cocoa, Florida.  One, a trip to Kennedy Space Center and the second, a geocache named ‘A Walk Thru the Village.’

Saturday, July 11, the crew decided to head to Kennedy Space Center to explore an adventure into the last frontier.  A short 20 minute drive and they were at the Space Center.  After standing in the Will Call line to pick up the tickets they ordered on-line they were inside and headed to the Rocket Garden.  The garden contains actual rockets of the Mercury, Gemini, and Apollo programs.

They decided that the next stop would be the IMAX theater for air conditioned viewing of two 3D movies.  Hubble documents the images of the Hubble Space Telescope, while Journey to Space documents current NASA projects such as sending astronauts to Mars.

Space Shuttle Atlantis calls the Space Center home now after traveling 126 million miles in space, and there is a wonderful exhibit that will leave you awestruck as you work your way around about 60 exhibits.

For a virtual tour of the Space Center, follow the link to  Kennedyspacecenter.com click on INFO, then scroll down to virtual tours.  Check out the exhibits for yourself.

At the Information Center our crew confirmed that there would be a rocket launch on Wednesday, so they decided to extend their stay to observe the launch from the marina. 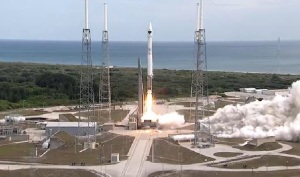 The launch lifted off at 1136 as scheduled.  The rocket and fire ball were visible for a few seconds, then made its way thru a low set of clouds and became visible again.  This time you could track the rocket for another five- ten seconds before it disappeared into another cloud bank.  The rocket reappeared in the blue sky and finally vanished into the clouds.  About a minute later, you could feel and hear the rumble from the takeoff.

Follow the link to a video of launch.   http://youtu.be/_bkojYvDAlk

The payload was a GPS system for both the Air Force and civilian population.  Which leads us to our second excursion of geocaching.  Need those GPS satellites to help find the treasure of caching.

The ‘Walk Thru the Village’ cache is a puzzle cache.  The adventurer has to visit 6 landmarks in the village, solve a puzzle at each location, and then the six solved puzzles lead to the final location for the treasure.

With the initial stroll thru town, the six puzzles were solved and our crew was off to the final location.  After considerable time looking and coming up empty handed, they looked at recent logs and determined that two of their solves were wrong.  It was getting dark, so they agreed to return the next day to make the grab.

On day 2, they rechecked the two puzzles in question.  First was for a phone number at a gazebo.  Seems there are two different phone numbers.  Give a nuke a 50/50 chance, they will miss it 90% of the time.  They needed the eighth number of the blue sign, not the eighth number on the gazebo post.  Pretty tricky.

The second puzzle asked for the number of windows at the historic theater, and there were three.  What the puzzle really wanted was how many ticket booths there were. There was one booth with three windows.  Armed with these new numbers, they were off to a new location to make the grab.  Again they came up empty.

This calls for a ‘phone a friend’ approach.  Our newbie skipper e-mailed the cache owner with the coordinates and asked if they were searching in the right spot.  While waiting for a response, it was time to cool down at the ice cream store.  While eating ice cream the owner responded that they still had one unsolved puzzle.  It was the phone number again.  The clue said use the eighth digit, our newbie skipper obviously cannot count because he was using the ninth digit.  Hhhhmmm that will make a difference in location of about 200 feet.

They moved to the ‘New’  final location since now they have solid evidence that they have the right coordinates.  But again, still no find.  Looks like the last person who searched for this cache came up empty also.

The name of our geocachers is Tex Snoop Dogs.  They were unable to sniff this cache out so they logged the following Did Not Find:

Well our streak of finds is over at 223. Have spent about two hours walking the town gathering clues.      Then when empty handed asked for help to learn that we were at wrong spot. Seems I cannot count to eight properly (but I can count to nine).

Finally got to right coordinates but still no pot of gold at the end of the rainbow (or peanut butter jar either).

Guess we will head back to the marina to our boat wondering what went wrong. Maybe we should stop at the pub….. The Village Idiot.

Thanks for the tour of the town.

With the shore excursions and rocket launch over, it is time to make the boat ready for the next few days of travel.  Planned itinerary is to motor to New Smyrna Beach and moor out one nite.  Then move north to Palm Cost for two nights.  Then finally, an extended stay in St Augustine.  Founded in 1565 as a Spanish military outpost, St Augustine is the oldest continuously occupied European settlement in the United States.

← Two for the Price of One
Run to New Smyrna Beach →