Eric here reporting on the southbound voyage of Still Waters II.  The crew has travelled 234 miles over the last 4 days and have pulled into Barefoot Landing Marina for two days.  There continues to be new opportunities each day to sharpen the skills of our crew.

Weather, specifically the wind speed and direction, continued to be a challenge for safe boating.  The wind for this passage was 12-15 mph out of the North-Northwest with gusts to 20.  With most of the passage headed south this was not to bad; however, at one point there were 20 miles in 4-5 foot waves that made for some exciting times.  Most of the day was spent in small chop of 1-2 foot waves with some really smooth water transiting some narrow canals.

While the crew was running the worst of the waves, they were tracking beside a red sailboat.  The sailboat looked like a hotdog in boiling water as it rolled and bobbed up and down in the waves.  The sailboat crew had on their full foul weather gear and were exposed to the wind, rain, spray, and cold.  Our crew was glad they were enclosed in the fly-bridge and out of the weather.

By 1530 the crew had had enough and found a cove in Adams Creek to drop anchor.  The cove was protected from the North wind but the wind continued to build during the night to over 20 mph.  The anchor held in the wind with another night of rocking in the waves.

There were a couple of interesting and amusing experiences as the crew continued south for 57 miles through narrow rivers and canals that make up this section of the AICW.

While waiting, another four boats were also stopped which caused a small boat jam.  At 1555 the military police boat announced that the exercise was complete and that it was safe to proceed south.

Our crew had been the first to arrive and drop anchor.  The other boats all passed Still Waters II and anchored between her and the police boat.  So, once the boats were allowed south, Still Waters II found herself at the back of the pack.

Ahead of the pack was the Onslow Beach Swing Bridge that opens on the hour and half hour.  The pack set speed to make the 1630 bridge opening.

The crew wonders how long the other boats would have sat there before someone requested the bridge to open.  You may recall the following exchange on the northbound cruise at this same bridge:

Skipper – “Are you opening the bridge on schedule?”

Bridge Tender – “If someone requests the bridge to open, I will open the bridge.”

Skipper – “I guess I am requesting you to open the bridge then.”

Bridge Tender – “Then I will open the bridge.”

Experience is a wonderful thing.  Schedule or no schedule, one has to request the bridge to open before the Marine tender opens the bridge. Those Marines manning the bridge are having fun at the boaters expense.

The crew decided to drop anchor in Mile Hammock Bay.  When they turned off the AICW to enter the Bay there were 15 other boats already anchored.  Still Waters II made 16, and at least one other boat pulled in a little after our crew.  The crew found a spot over on the outside of the other boats and dropped anchor for a peaceful calm night.

Another strange day greeted our crew as they put in 77 miles on the water.  At about 0900 the skipper ‘decided’ (using the word decided very loosely here) to take a side trip up the New River.  It was an hour later when it dawned on the skipper he was sight-seeing and off course.  The skipper turned around and made way back to the AICW.

The skipper was more than a little hacked at the navigator for missing the marker and leading the helmsman down the wrong course. (I will not mention that the navigator and helmsmen just happened to also be the skipper.) But the skipper believes that there is a reason for everything, and the reason became obvious later in the day.

At 1540 a Coast Guard boat approached Still Waters II and one of the Coasties directed the skipper to maintain course and speed.  Three Coasties boarded Still Waters II for a routine “Safety Inspection.”  The Coasties spent about 30 minutes onboard looking all through the vessel and reviewing the boat documentation paperwork.  Once they completed the inspection they reported that the vessel had NO Violations.  They were also very complimentary of the overall condition of the vessel.

The crew would like to thank the two previous owners for taking good care of Still Waters II.  The crew would also like to thank Captains Chris, Alyse, and Geoff for making sure she was incompliance with all Coast Guard regulations prior to the summer shack-down cruise.

The crew dropped anchor in the Cape Fear River at dusk near Southport.  This was not the best spot to anchor but the winds finally died down after midnight to allow some good sleep for a tired crew.

Boat Name of the Day – on a catamaran – Kat Cha Later

After weighing anchor, the crew set off for North Myrtle Beach.  The crew put in 48 uneventful miles and tied up at the Barefoot Landing Marina at 1530. 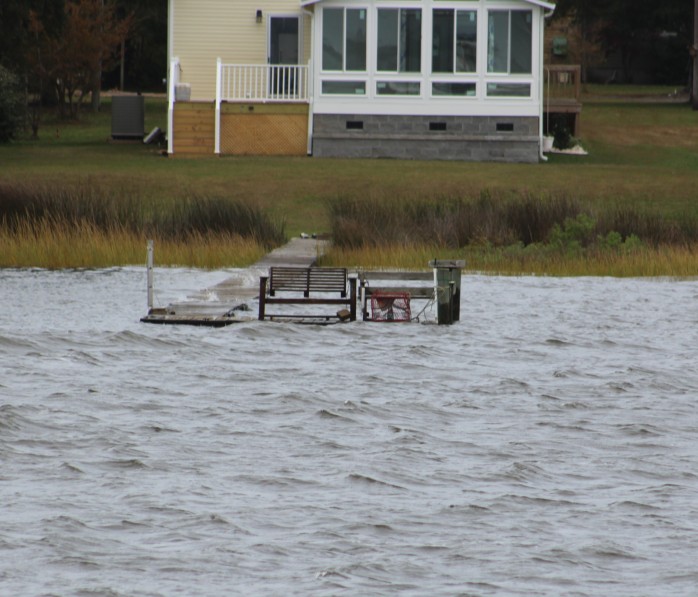 The most interesting thing for the day was the water level.  It has been several weeks since the Carolina’s had the 1000 year rain that caused so much flooding.  As the crew travelled south they have begun to see examples of the flooding.  There are still many boat docks underwater, and houses with water very near the front door.

There are sailboats getting stuck at 65 foot bridges because their 63 foot masts will not fit under the bridge.  They anchor beside the bridge and wait for the tide to go down and get some more clearance.  There were two sailboats at a bridge showing 63 foot clearance that had been waiting for five hours to get under.  The two captains had the following radio conversation as our crew passed them:

Monohull – What is your mast height?

Catamaran – 63 feet, what is your height?

Monohull – 63.5 feet.  I am waiting for the bridge to show 64 ft clearance on the board marker before going under.

Monohull – I was hoping you would go first. I am chicken.

Simply amazing that there is still this much water around after so many weeks.  Water levels look to be at least two feet higher than normal.

The crew plans to spend two days at the marina before heading back out on the AICW on Saturday morning and making the final push to Florida.

Till then may the wind be in your back and you find still waters.