Eric here reporting on the latest travels of Still Waters II. David and Martha (D&M) Weyandt arrived onboard Saturday, November 7, from Granbury, Texas. They had to be headed back to Texas on Friday so a plan was made to cruise south and loop back to Jacksonville on Thursday.

The weather was misty rain when the crew left the dock, but the crew did not let that dampen their spirits. By the time the crew travelled the 26 miles back to the ICW from the Ortega River, the weather began to break and the sun finally peaked out. The crew headed seven miles down the ICW and took advantage of the dry spell to pull into the Palm Cove Marina to refuel. After refueling, the crew motored across the ICW to dock at Beach Marine at Jacksonville Beach.

Click on pic above to watch the dolphins swim.

The plan was to walk the mile and a half to Jacksonville Beach but the weather did not cooperate. The rain came wave after wave with high driving wind. The crew spent the evening on the sundeck playing cards and wiping up water from a few leaks that showed up around the windows.

The weather finally broke during the night so the crew made their way to the beach first thing in the morning.

The crew then headed 54 miles south down the ICW to the Marina at Hammock Beach. The crew arrived about sunset which made for a beautiful dock setting. The dock master explained to the crew that the marina was part of a Resort that was a couple of miles down the road. The dock master provided a phone number that the crew could call to get a courtesy van ride to the Resort. The crew took time to eat and then set out on a reconnaissance mission to check out the Resort.

The Resort turned out to be a big surprise with multiple swimming pools, hot tub, lazy river, and beach access. They also discovered a ping pong table and played a little ‘Around the World.’ Martha took home the trophy after beating the skipper on match point. The crew headed back to the boat and decided that they would spend Monday at the Resort. 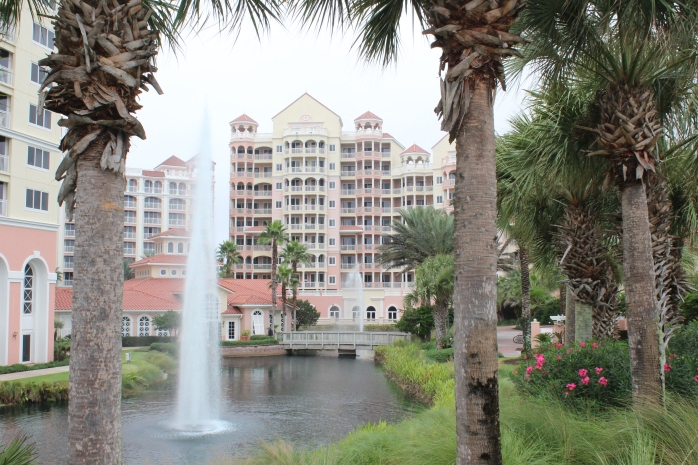 After eating a large breakfast, the crew made their way to a fun filled day at the Resort. The crew spent time in the hot tub and the lazy river.

They also spent some quality time relaxing on the beach.

The crew headed back 24 miles north to explore St Augustine. With only half a day to take in the sites, the crew decided to buy tickets on the Red Train Tour. Due to it being Veterans Day, the skipper and Dave Weyandt got free tickets. The crew took a courtesy van out to the lighthouse.

The crew spent about an hour on the grounds and then headed back to the Red Train Headquarters for the St Augustine tour. The tour was about eight miles and lasted an hour and a half. The conductor was Smokey and he provided details of over a hundred sites as he drove around historic St Augustine.

After the tour the crew walked around town and finally stopped to have dinner at an Irish Pub. All enjoyed the fish (fresh cod) and chips.

Seems all the Magnolia trees died and the locals replanted with oak trees over a hundred years ago.

The crew shoved off early to make the run back to Jacksonville. The wind was predicted to be out of the west at only 4-6 mph for the day. So when the crew got to the St Augustine inlet they looked at the Atlantic Ocean and noted the smooth conditions.

The skipper took a vote to ensure that all onboard felt comfortable heading out into the Atlantic. After all agreed to make the run north in the Atlantic, the crew made their way out three miles offshore.

The crew turned north and travelled 35 miles north to the St Johns Inlet. The ride was smooth with the wind coming from the shore. After arriving at the inlet it was about 5 miles back to the ICW and then another 26 miles back to the Ortega Landing Marina.

The crew got docked just before sunset and then celebrated a fun filled week by grilling burgers and eating dinner under the stars at the marina clubhouse.