Eric would like to welcome Teddy Paul aboard as a virtual crew member.  Ted is along time friend and fishing buddy of the skipper.  However, the skipper was not sure if Teddy Paul would actually come aboard.  Seems that the last time Ted went offshore fishing with the skipper, Ted got a bad case of the Gulf Flu.  He had a hard time keeping down breakfast.  The skipper promises not to take you out in that rough of water.

Eric here reporting on the crew’s passage through South Carolina.  In our last report, we left the crew at Hilton Head Island at Harbor Town Yacht Basin.  Turns out that the marina is part of the Sea Pines Resort and boaters get to enjoy all the amenities of the resort.  The crew reports that the amenities are wonderful!

The crew spent the first afternoon wandering around Harbor Town taking in the sights.  The first thing you notice is the red and white striped lighthouse as you enter the harbor.

The lighthouse was built by Charles E. Fraser in 1969 as part of the new Sea Pines Resort.  People initially ridiculed the idea of a lighthouse but Mr. Fraser pressed on and completed the project in 1970.  People referred to the lighthouse as ‘Frazer’s Folly.’ 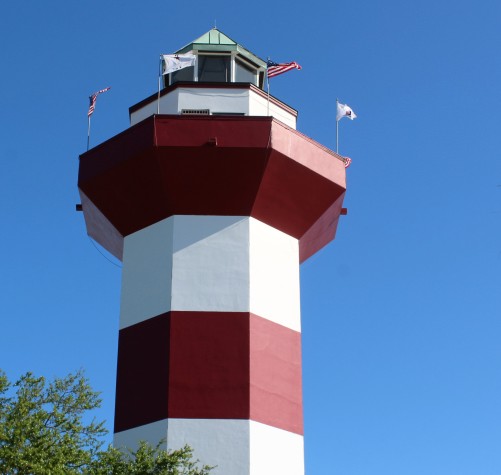 Now, the lighthouse is the most recognized symbol on Hilton Head Island.  In fact, you may have seen it if you watched The Heritage golf tournament.  The lighthouse has helped the 18th hole of the Harbor Town Golf Links to become one of the most popular and recognizable finishing holes in golf.

The gentleman who is docked behind Still Waters II has his boat all decked out with red, white, and blue bunting.  He dressed up his boat for the golf tournament.  He is 82 years old and lives onboard with his wife.  The name of his boat is the ‘Ramblin’ Wreck.’  Yes, he is a 1957 graduate of Georgia Tech.  The skipper enjoyed listening to his many stories.

On Tuesday, April 19, 2016, the crew spent the day riding the complimentary Sea Pines Trolley around exploring the island.  Lunch was eaten at the Crazy Crab, who advertise that they have the best supplier of seafood on the east coast – the Atlantic Ocean.  The crew then took the Blue Trolley to Sea Pines Beach Club to view the seafood supplier.

The Beach was large and full of people enjoying the day.  The interesting thing was the beach sitters were all a hundred yards from the ocean.  They were all aligned along the sand in a line that would be water front at high tide.  But because the tide range is 7 feet and the tide was out, the water was far away. 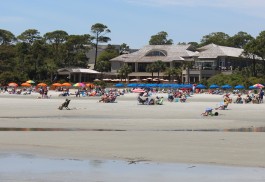 Next was a trip on the Green Trolley to the South Beach Marina Village.  The crew walked around here for a while and found some parrots that were entertaining.

It was then time to head back to Harbor Town for ice cream and to check out the resort pool.  Unfortunately, all good things have to come to an end and it is time to get ready to leave on a four day journey to Barefoot Landing in North Myrtle Beach.

Day 1, Wednesday, April, 20, 2016, the crew left Harbor Town and cruised almost 8 hours on a run to anchor in the South Edisto River.  The weather was perfect and the light winds made for glass like conditions on the water.

When the crew passed Beaufort, they saw ‘Plane 2 Sea’ tied up along the face dock at the marina.  ‘Plane 2 Sea’ crossed her wake back in Jacksonville just a week ago.  This makes her and her crew ‘Gold Loopers’.

You may have noticed the white burgee (flag) on the bow in some of the pictures of Still Waters II.  Once a crew crosses their wake, they change their burgee from White to Gold.  Our crew aspires to join the Gold Looper Fraternity by crossing their wake in Fort Myers sometime in 2017.

The number of crews actually completing this goal is quite small as shown in the table below from Americas Great Loop Cruising Association.

The 30 minutes spent in the Ashepoo – Coosaw Cutoff were a bit nerve racking.  Active Captain warned that there were many shallow spots at low tide.  Our crew was in the cut during low tide and found at least three areas that were 4 – 4.5 feet deep.  The hull never touched bottom so the crew claimed success when they arrived at the Ashepoo River and exited the cut.

The crew dropped anchor in the South Edisto River and had a relaxing dinner on the sundeck.

Day 2, Thursday, April 21, 2016, the crew awakened to some very heavy fog.  At 0600, when the skipper got up, he could not even see the bank on either side of the boat.  The plan was to leave at 0800, but it was 0900 before the visibility was good enough to safely pull the anchor and navigate the water ways. 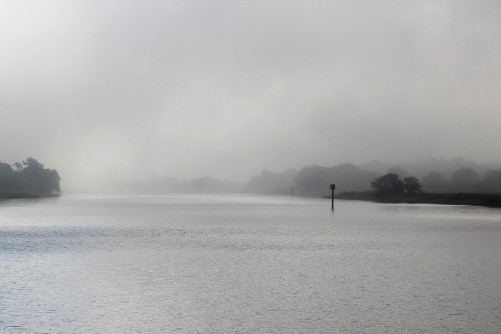 At 0950 the fog set in again and was so bad that the helmsmen could hardly see past the bow of the boat.  Thank goodness for chart plotters and radar.

Normally our crew operates the boat so that the helmsmen also has the role of lookout.  With the fog so bad, the crew split the roles and the skipper took the helm while the Admiral was stationed as the lookout.  The skipper was focused on piloting the boat via the compass and chart plotter while the Admiral was actually looking into the fog to make sure they did not run aground or worse yet, hit another boat.

After about 30 minutes of this action the sun finally burned thru the fog and the crew could once again see where they were going.

The highlight of the day was cruising through Charleston Harbor.  Always fun to see the homes along the battery, sailboats in the harbor, and Ft Sumter guarding the entrance.

At 1610, the crew dropped anchor in Price Creek and grilled hot dogs for the evening meal.

Day 3, Friday, April 22, 2016, the crew pulled anchor at 0745 and headed back north up the ICW.  The crew was greeted by dolphins as they made their way out of Price Creek.  Later, about 0925, the crew got a dolphin show as a couple danced and swam around the boat.  Then one swam up behind the wake and jumped completely out of the water.  A new first on this adventure.

As the crew continues north the salt marsh is slowly relenting to more actual land and shore.  The more shore, the more trees.  The critter watching also seems to improve with more tree lined shores.  The skipper spotted two gators, one which swam across the river just in front of Still Waters II.  He also spotted a Bald Eagle sitting in a dead tree.  From a distance, he first thought it was just another Osprey.  But, as they continued to close the distance, he finally recognized the pure white head.

A boat came by in the early afternoon, ‘River Chic’ and started a conversation on the radio.  They asked about doing The Loop.  Turns out they plan to do The Loop starting in 2017.  They were out taking their parents out for a cruise to celebrate their 50th anniversary.  Always meeting interesting people on this adventure.

The crew had good favor with the winds in their back all day, and favor with the current as they basically rode the current most of the day.  This made for faster travel than normal and the crew completed their 60 mile day by 1515 and dropped anchor in the Thoroughfare Creek.

Day 4, Saturday, April 23, 2016, after the crew was rocked by a wave of more than a dozen bass fisherman off and running to their favorite fishing hole, the crew pulled anchor and started north towards North Myrtle Beach.

The crew stopped about halfway to take on 100 gallons of fuel.  Seems the skipper just cannot pass on a good fuel price.  $1.80 per gallon with a 10% Boat US discount.  Just too good to pass up.

After the short delay the crew was passed once again by the Sojourn.  This makes every day they have been passed by this boat since leaving Jacksonville.  The Sojourn must knock off early every afternoon while our crew continues to cruise later into the day.  The next day, with the Sojourn traveling a bit faster than Still Waters II, they once again pass our crew.  Today as they passed, the skipper learned that they are on their way to spend the summer in Maine before returning to Florida to winter.

The crew managed to get their favorite spot at Barefoot Landing Marina.  They are right next to a restaurant with Laidback Larry playing Classic, Trop Rock, and Original works.  The crew will hang on the sundeck and listen to music until Laidback Larry stops playing.

With only a short 36 mile run today, the crew decided they could get their business of provisioning done this afternoon so they will press on tomorrow.  Up next will be some of the big rivers and sounds that can be nasty if the weather is not cooperating.

The skipper has a shout out to Travis, the On-line Pastor at 12 Stone Church.  Thanks for sending Ron Blue’s book, Master Your Money.  The book and the series were wonderful.

← Georgia On My Mind
The Good Old North State →