Splish, Splash, She is Taking a Bath

Eric here reporting on our crew’s stay at Delaware City.

I would first like to welcome Dave & Teresa Sammons as our newest virtual crew members.  They are longtime friends of the crew.  Welcome Aboard!

The crew went exploring around town on Sunday and Monday.  The town’s history is closely tied to the Chesapeake and Delaware (C&D) Canal.

The construction of the original canal began in 1804 with a goal to shorten the travel route from Philadelphia to Baltimore.  The plan included 14 locks to connect the Christina River in Delaware with the Elk River at Welch Point, Maryland.  The project was put on hold after the company ran out of funds.

The canal company got reorganized in 1822 with a new route from Newbold’s Landing Harbor (now Delaware City) to the Elk River.  The new plan called for only four locks.  Work restarted in April 1824.

The workers used picks and shovels to dig the 14 mile canal, 10 feet deep and 66 feet wide.  Workers were paid about 0.75 cents a day for this back breaking labor.  The workers completed their task and the canal opened for business in 1829.

Initially teams of horses and mules pulled the barges through the canal.  Later steam engines replaced sail power which required a larger canal.  Eventually, the pressure from the railroads caused canal traffic to decrease and put pressure on profits.

In 1919, the federal government purchased the canal and turned operation over to the US Core of Engineers.  In 1926, the Core completed renovations of the canal that moved the eastern entrance from Delaware City to Reedy Point, approximately 2 miles south.  The new canal was 12 feet deep and 90 feet wide and ‘free’ to commercial traffic.

On Tuesday, the crew got a bit of a surprise as the schedule for the haul out changed.  Quest, a, Canadian vessel, was scheduled to be hauled out first at 0700 to have her props changed.  However, her props had not arrived and were not scheduled to show up until 0830.  The marina decided to haul Still Waters II first, then haul Quest. 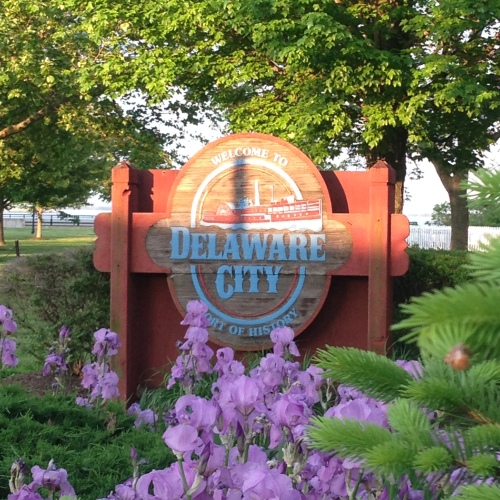 Anyhow, the starboard prop looked like a big ball of sail material had wrapped itself around the prop.  On the port side, the sail lines had wrapped themselves around the shaft.  Not sure where that junk would have come from other than sucked up off the bottom of the marina in Havre de Grace.

The crew went ahead with their plans to have the props removed and rebalanced.  While they were at it, they had the two spare props stored in the bow reconditioned also.

The Baltimore prop shop was unable to do the work because they had two 80 inch props in their shop that they had to get turned around by the end of the week.  The marina ended up sending the Still Waters II props down to Cambridge, MD.

The shop completed the work and the props were back installed on the boat by close of business on Thursday.  All was set for an early splash on Friday morning.

The Admiral went to return the rental car and make one last attempt to recover the camera, while the skipper went to the marina to launch the boat.  When the Admiral arrived without the camera at around 0930, the boat was still on the hard.  The launch did not take place until about 1030 due to low tide and current.

When she was finally splashed back in the water the engines decided that they would not start.  Troubleshooting found the batteries were down to 9 volts, so the marina manually shoved the boat out the chute and tied her to the dock to charge her batteries.

The crew finally shoved off the dock to make the run to Cape May at about 1400.  Since this was a long run and a chance to run out of day light before docking, the skipper ran the boat at 12 mph to make the Cape May inlet at 1830.  They then made the three miles in the canal to Utsch’s Marina and were safely tied to the dock by 1920.  Thanks to the young man on the sailboat from Rhode Island in the next slip for the help with the lines.

The decision to make the run to Cape May turned out to be a good one because overnight a big storm blew in with sustained winds over 20 mph.  Delaware City had no room to dock Saturday night, so the crew would have had to find another place to move to in the wicked weather.  Instead our crew is safe and sound in Cape May making plans for the jump up the New Jersey coast to New York City.

Check in next week to see if the weather will allow an outside run to Atlantic City or will the crew take the Jersey ICW.  Will the anchor hold next to Lady Liberty in the New York Harbor?  Lastly, shore excursions planned to Ellis Island, Statue of Liberty, and the 9/11 Memorial.

Till then, may the wind be at your back and the seas calm ahead.

← Wrath of the Three Sisters
Whale of a Tail →

7 Comments on “Splish, Splash, She is Taking a Bath”