End of the Tenn-Tom Waterway

La Salle here catching you up to date on the latest travels of Still Waters II. Click on this link to see the day- to-day travel log.

But, before we get started, we need to welcome three new virtual crew members aboard:

Glad to have you aboard and hope you enjoy the cruise!

During the week of Thanksgiving the crew took the week off and headed to Texas for Thanksgiving.  Before leaving Columbus though, they took the time to visit the Waverly Mansion.

After entering the grounds you see one of the finest antebellum homes in the south.

The home has an interesting history.  The mansion was built back in 1852.  The Lady of the house died before the home was completed.  The man of the house moved his 10 children in and soldiered thru the Civil War.

Ultimately, two bachelor sons lived in the home until their deaths.  The last son died in 1913 and the home remained empty until 1962.  Most amazing the original mirrors and chandeliers survived the 50 years without damage from vandals.  The local town teenagers would visit the house to have parties and see the supposed ghosts of the mansion.

The Snows bought the mansion in 1962 and spent 23 years restoring the home.  Mr. Snow still lives in the mansion today with one of his daughters.

The grounds had a few pens where the crew found some peacocks and turkeys.

Not sure if the turkey survived the holiday but the crew made it back to the boat on Monday and headed south on Wednesday.

Summary of week:  The weather was not cooperating due to heavy rains, so the crew did not shove off until Wednesday morning.  The rain was dearly needed as this area has been without any measurable rain in months, and the rain did help put out the fires in the Smokey Mountains.  On Monday, there were 25-30 mph winds.  On Tuesday, the winds continued with additional rain and thunder.  The crew spent most of the evening under either a tornado watch or warning.  One tornado touched down in north-west Alabama killing several folks. 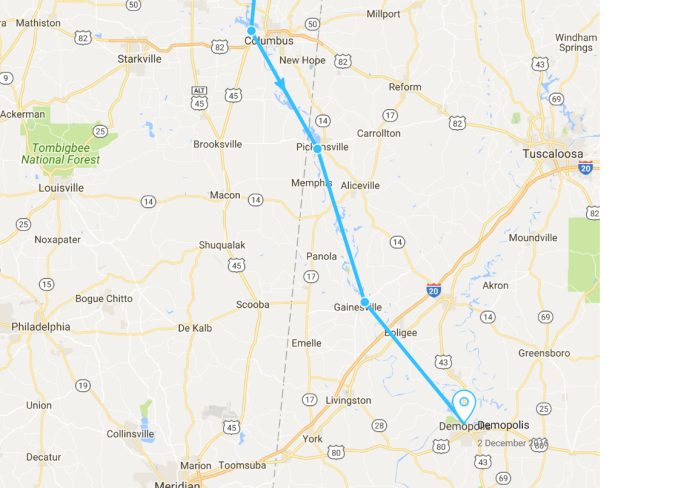 Finally on Wednesday, the crew got underway and continued south on the Tenn-Tom Waterway.  They reached their destination in Demopolis on Friday with two intermediate stops.

The crew shoved off from the dock and made their way through the Stennis Lock with minimal delays.  After clearing the lock the skipper noticed that the boat was moving about a full knot faster than normal for this engine rpm.  The water run-off from all the rain is responsible for this added speed.

The water run-off is also responsible for all the floating debris washing down the river.  The crew must be extra vigilant the next few days to prevent hitting some of this flotsam and causing boat or prop damage.

The skipper expected that most of the leaves would be off the trees because of the wind and rain.  However, many of the trees are still sporting their fall colors.

In addition to the fall color, the crew also spotted a few interesting things in peoples’ yards.  This ‘old school’ phone booth must be Maxwell Smart, Agent 86, secret homestead.

Then they cruised by this home with a totem pole out front.

About noon the waterway wound itself far enough east that the river re-entered Alabama.  The crew then cruised under the HWY 86 Bridge and then settled into the Pirate Cove Marina for the afternoon. 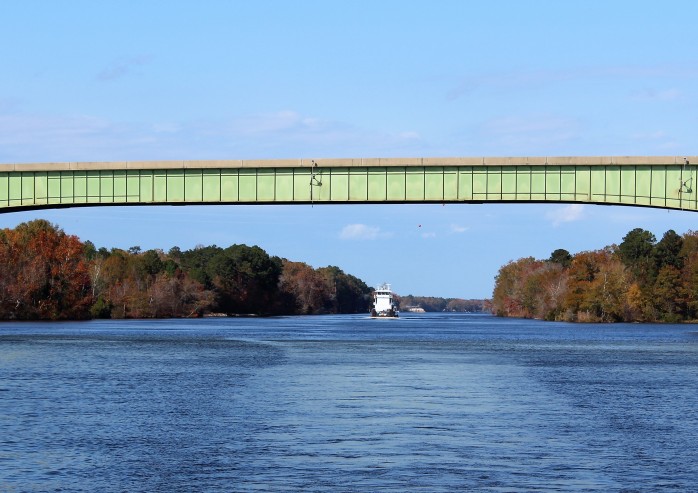 After docking, the crew walked down to the Bevill Lock to visit the Visitor Center.  The Visitor Center is patterned after the 1830-1860 Greek revival homes of the era.  The exterior of the building is based on the Erectheum, an iconic temple in Athens, Greece.  It looks very much like the Waverly Mansion that the crew visited in Columbus. 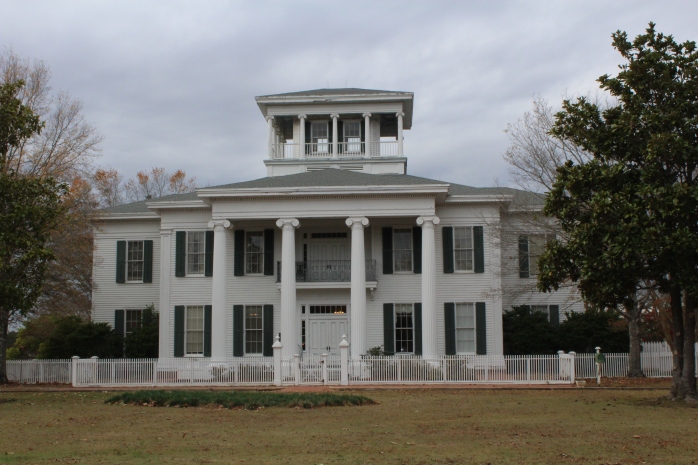 A few shots inside of the Visitor Center:

The crew also toured the US Montgomery which is a National Historic Landmark on display next to the Visitor Center.  The vessel was the last steam-powered sternwheeler to work the inland rivers.  She was retired in 1982. 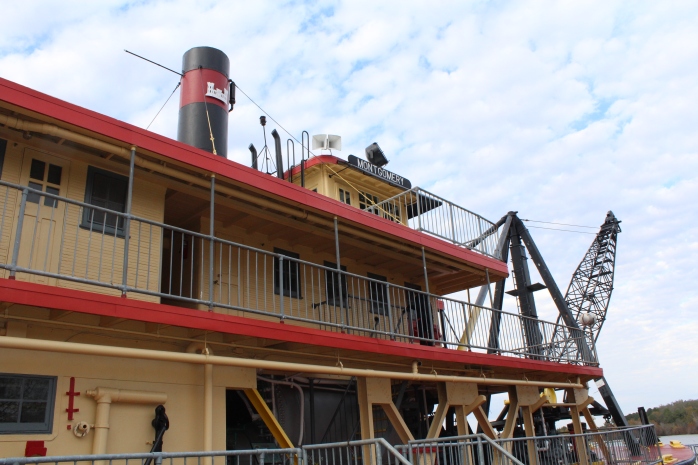 The day got off to a slow start when the skipper radioed the lockmaster and learned that a tow was about to enter the lock just outside the marina.  The lockmaster said it would be an hour before he could lock our crew down.  Better to be tied to the pier than float around by the lock so the crew relaxed and waited at the marina.

After getting word that the lock was ready for the pleasure craft, the crew shoved off the dock and entered the lock.  Upon exiting the lock the crew found that the water was still spilling over the dam so they continued to get a 1 knot push from the current.

Notice the muddy water from the rain runoff.

The run-down river was interesting today.  The scenery continued to change.  The trees went from the hard wood forest to include Cyprus and pines.  The shore has begun to get more of a sandy loam rather than the red clay.  The river bank has also begun to lower.

With about 10 miles to the anchor spot for the night the crew decided to go another 6 miles and clear the Heflin Lock today rather than first thing in the morning.  Only problem was they passed a tow boat 6 miles from the lock.

As a reminder, locks are supposed to take commercial traffic before pleasure craft.  The skipper decided to roll the dice and see if they could speed up enough to make the lock without having to wait on the tow.  The skipper increased the shaft rpm with the engines and settled at 10 mph.

When they rounded the last bend before the lock they still had two miles to run.  The lockmaster saw them and radioed the tow and asked for his estimated time of arrival to the lock.  The tow Captain responded that he was at least 45 minutes from the lock.

The lock master then asked the tow captain if it would be alright to put a pleasure craft thru the lock before he arrived.  The lock master told the captain that he would turn the lock around and have the gates open for him when he arrived

The tow captain agreed and said he would dial it back a bit to give more time. The crew entered the lock and got one of the fastest drain downs to date.  When the gates began to open the lock master sounded the horn to signal the crew to untie and leave.  Normally the horn does not sound until the gates are completely open.

About 20 minutes later, the skipper heard the lock master radio the tow and tell him that the lock was ready for the tow to enter when he arrived.  A win-win for everyone.

The crew pulled into Ox Bow Creek just below the lock and celebrated their lock success by grilling hamburgers on the bow of the boat. 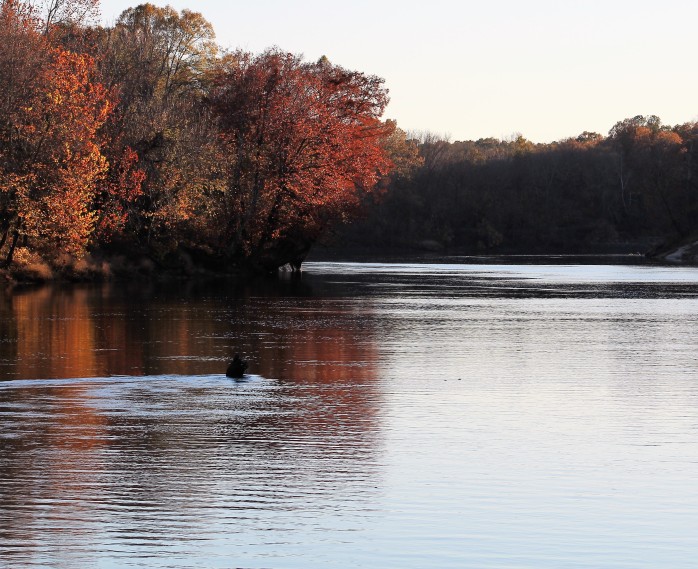 The crew got started as soon as they could after the fog lifted.  Thirty degree nites cause thick fog in the mornings with the still warm water.  By the time the fog lifted, the skipper noticed that the water runoff from the dam had stopped.  It would be a calm day on the water.

Notice that there is no current flowing around the green navigational aid.

The cruise was another enjoyable day.  With the sun shining, the 50 degree outside temperature is very comfortable in the enclosed helm.   The wildlife was also taking advantage of the sunshine with many birds standing along the shore.

A Kingfisher soaking in the sun.

The turtles were also sunbathing. 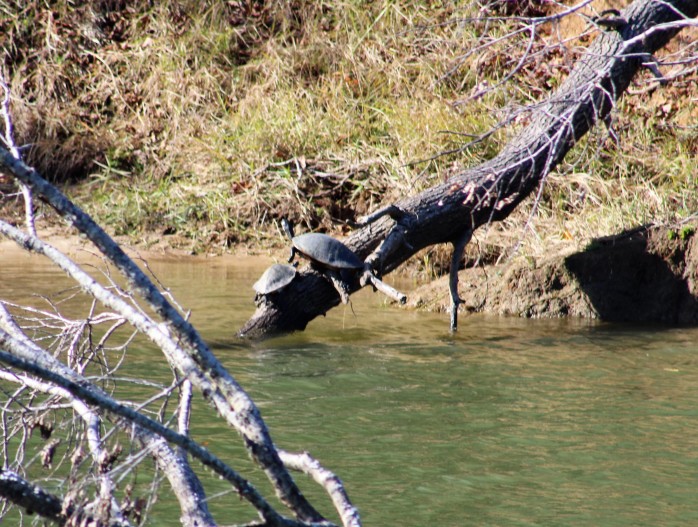 There were some very interesting shore formations along the route today.  The cliffs were high white bluffs. 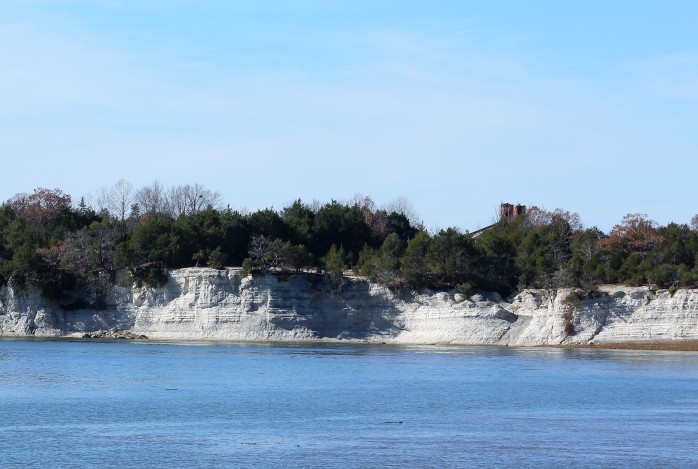 In the following shot can you spot a dolphin or penguin?

The river was very winding today so as the crew was making their way thru these white cliffs they caught a down bound tow. 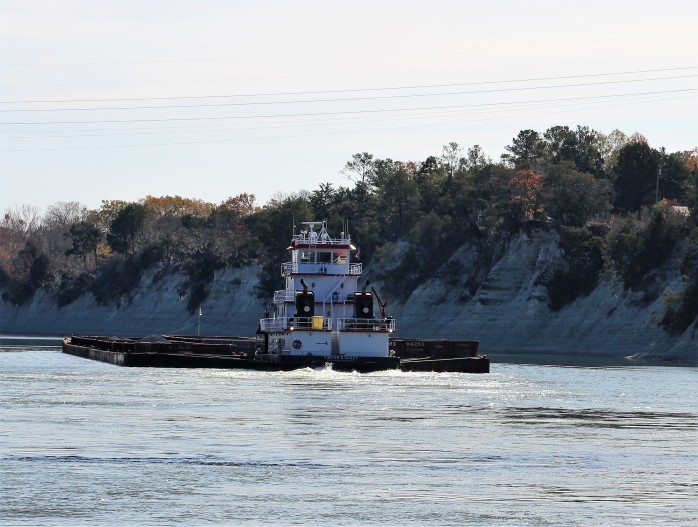 There was a short straight run of river past the above bend.  The Captain of the tow told the crew to pass on the 1 so the skipper sped up and passed the tow in the straight narrow river section.

Yes, the skipper is only a few feet away from the tow as they go by, as you can see while looking out the window. 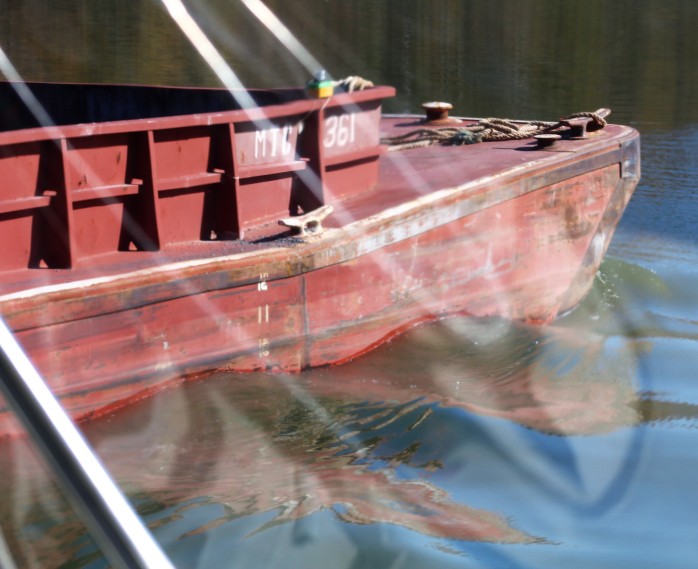 But that is because there is not much room over to the shore side as you look out the window on the other side. 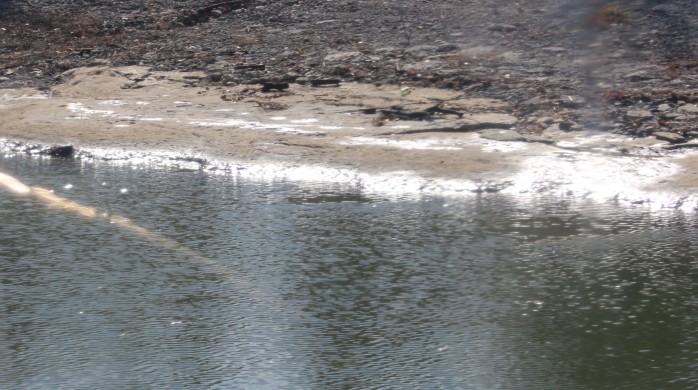 A little after 1300, the crew  passed the 225 mile marker which means that we are now halfway down the Tenn-Tom on the way to Mobile, Alabama.

After passing this tow pushing his barges into the shore, the crew entered the Kingfisher Marina. 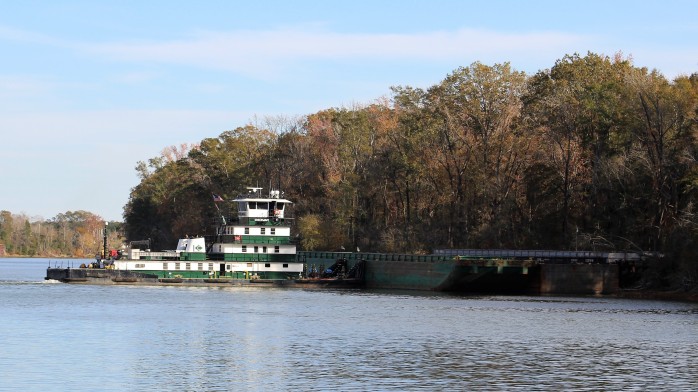 Next Week –  The crew will head out on Monday and make their way down the Black Warrior-Tom Bigbee Waterway to Mobile Bay.  Only 2 locks to clear and the boat will be back in salt water.  Looking forward to spotting the first dolphins in the Bay.

← Headed South on the Tenn-Tom
That Had to Hurt →