Eric here catching you up to date on the latest travels of Still Waters II. Click on this link to see the day- to-day travel log.

I would also like to welcome Scott M. aboard as our newest virtual crew member.  Scott plans to start the loop in May 2017.  Welcome aboard Scott.

The crew moved to Carrabelle on Monday and launched their Gulf crossing to Tarpon Springs on Wednesday.  They then moved to Clearwater on Saturday. 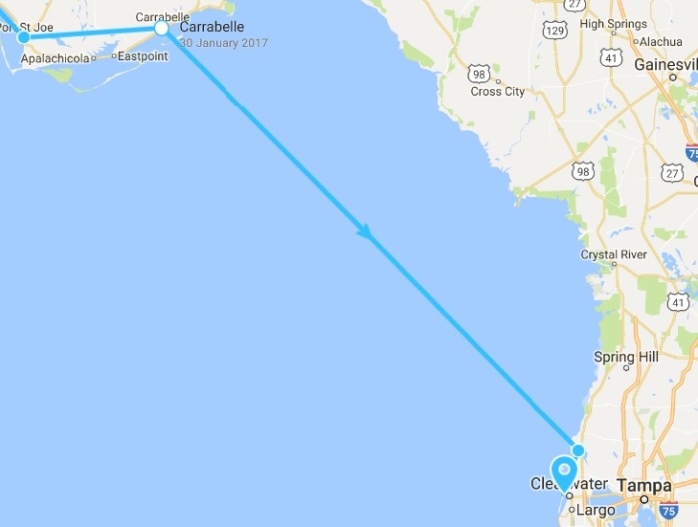 The wind was forecasted to lay down Saturday about 1600.  Well that did not happen.  In fact, the winds continued to blow all day Sunday, so the crew cancelled their anticipated run to Apalachicola.  The skipper was busy recalculating the next route based on the latest weather information.

The wind finally laid down about 0200 in the early morning.  The crew decided to skip Apalachicola and make the 62-mile run all the way to Carrabelle because there looked to be a good weather window to cross the Gulf on Tuesday night / Wednesday.

The crew buddy boated with The Lord’s Provision.  The two crews left just before 0900 and made good time over to The Moorings at Carrabelle.  The crew met up with  Abaco Lady, Journey and Jo-Ca, also staged at The Moorings Marina to cross the Gulf on Tuesday.

Based on the ever-changing weather conditions, all the crews agreed that a Wednesday / Thursday crossing looked better than launching out on Tuesday.

Tuesday became a day of relaxation and planning as all the crews were gearing up for the Gulf crossing.

Roger, the skipper of The Lord’s Provision, decided to grill chicken for everybody, so we met on board his boat for lunch and the skipper dubbed it ‘The Last Supper.’

After spending a few days in Carrabelle the crew learned a few things worthy to share.  For starters, the town was incorporated in May of 1893.  The area had many natural resources of virgin forest and a deep water harbor.  The railroad also came to town to help the area prosper.

During WWII Camp Gordon Johnston trained 250,000 men in the art of amphibian warfare.  The area was selected for this specific task due to the barrier islands, Dog Island and St George Island.  The army practiced their beach landings on these two islands that the crew will pass between on their way into the Gulf of Mexico.

The fast boats got up before the crack of dawn and were off the dock by 0530.

The slow boats continued their final preps and were off the dock by 1500.  One minor issue though was an unexpected wind that blew in about 1400.  Before leaving the dock, the skipper reviewed his favorite weather sites and learned that this new wind was predicted to lay down at dark (1830).

Unfortunately, when the crew got out of East Pass and entered the Gulf of Mexico, the crew found the winds about 12 mph and the waves 2-3 feet.  The three boats decided to continue to cross the Gulf based on the wind forecast.  Again, the forecast was wrong.  The wind did not lay down until about 2300 and the waves did not calm down until midnight.   This made for a very lumpy, rolly, rocky, ride for the first nine hours of the run.

Just a few examples of just how bad it was for the first nine hours:

Just a little bit after dark, the crew saw a red flare shoot up.  The flare was judged to be a long distance away due to the height of the flare.  The crew tried hailing any distressed vessels in the area, but there was no response.

Then about 45 minutes later a second and third flare was seen.  These two flares were just off the starboard side and were very high.  Again, when the crew tried to hail any distressed boat, there was no response.  While the skipper was trying to hail the boat shooting the flares, the Captain of Jo-Ca hailed the Coast Guard to report the flares and our GPS position.

The Coast Guard reported that they were performing flare training in the area and NOT to launch a search for the boat.  Interesting enough, there were no more flares after the call to the Coast Guard.  I guess training was complete.  Hmmmm, interesting indeed.  The Admiral was just relieved that they did not have to go searching for any boater in the dark and bad waves.

A little around 2100, a large light was seen on the horizon.  As the three-boat flotilla got closer, the crew could tell that it was a sport fisher boat with a tuna tower.  The skipper checked the charts and determined that the nearest land was 61 miles away.  The crew began to wonder why on earth would someone be out here fishing in these nasty conditions.

A few minutes later the Captain of the sport fisher boat hailed the flotilla.  The Captain could not identify what kind of vessel the three boats were.  At the time, the three boats were running with only a quarter mile distance between boats to maintain visual contact during then night crossing.  The Captain thought we were a large tow and was beginning to worry that we were getting way to close for his comfort level.

The Captain of Tranquility III, Mike, let the sport fisher know that we were actually three separate boats crossing the Gulf.  Mike also inquired of the sport fisher, “What are you doing out here in this weather?”  The sport fisher responded in a southern drawl, “Oh, we’re just out here catch’n a few red snappers.”

After six hours of misery bouncing around in the waves, the crew found humor in the response.

Finally though, the wind did lay down and the waves settled down also.  There was only a light breeze and the waves were less than 1 foot.  So much for the saying that nothing good happens after midnight.

With the calmer seas, the crew of Tranquility III began to recover enough to come over the radio and sing “The Wreck of the Edmund Fitzgerald.”

At 0630, the dawn of a new day was beginning.  At 0720, that big ball of hydrogen fusion peeked over the horizon to give the crew a beautiful sunrise.

At 1010, the crew passed a red day marker R4 that officially ended the Gulf crossing as the crew entered back into the GICW.

At 1051, the crew entered the Anclote River at low tide.

The skipper called the marina and the staff warned the skipper that the low tide had caused water levels to be about 4 feet deep on the approach to the dock.  The staff suggested that the skipper anchor and wait for the tide to rise before entering.  Since the skipper was tired from a long night with little to no sleep, he and the Admiral decided to risk the low water level and try to make the dock.  With a draft of 3 feet 9 inches and the fact that the bottom would be soft and sandy if they went aground, the crew headed for the marina. 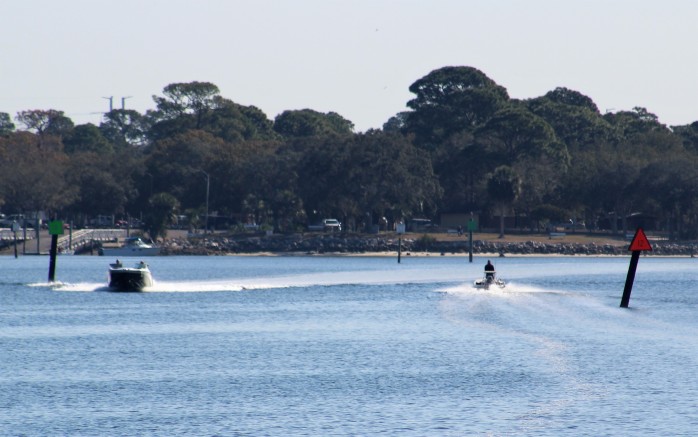 At 1145, the crew was safely secured at the dock.  On the last mile of approach to the dock, the water level showed to be 4 feet 3 inches.

The crew took a well-deserved nap, then headed to Rusty Bellies to celebrate the successful Gulf crossing with the crews of Abaco Lady and Journey.

The crew explored the sponge docks in the afternoon and tried to learn a little about the Greek culture that spawned Tarpon Springs.

The town now has the largest percentage of Greek’s than any other community in the United States.

The crew tried a Greek restaurant for a late lunch and then tried some Greek pastries for a late-night snack.  While eating lunch, one of the hot menu items was Flaming Goat Cheese.  The waitress would pour some liquor over the cheese and then light the concoction on fire which would toast the cheese.

The crew also walked down to Craig’s Park to discover if any manatees might be swimming around in the bayou.  The crew watched four manatees for a couple of hours while they also took in the warm Florida sunshine.

The initial Float Plan today was to travel to Caladesi Island State Park.  The water level approach is shallow so the skipper waited for a rising tide before heading out.  Unfortunately, within 100 yards of turning off the main channel to the State Park, the boat nudged the soft sand bottom.  There was already one boat solidly aground here and the skipper did not want to become number 2.

He called the State Park Marina and learned that the first come first serve slips were already taken so it was time for the skipper to recalculate the next move.  The skipper then called the Marker 1 Marina in Dunedin only to learn that they were also full.

This was a beautiful Saturday which caused more than the normal number of boaters to be on the water.  The crew just wanted off of the water because all the boaters were running fast and throwing huge wakes.  Not much boating courtesy being shown on this run.

When the skipper called the Clearwater Municipal Marina he learned that they had one slip available.  He booked the slip and headed to the marina.  Luckily, they were only 6 miles from the Marina.

After securing the boat, the crew discovered that they were docked just in front of their new friends aboard Lacuna.  You might recall they first met back at Ft Walton Beach.    Turns out that it was Jen’s birthday and her parents and brother had come down to visit.  Happy Birthday Jen from the crew of Still Waters II!!!!.

The crew debarked the boat and took a two-hour stroll along Clearwater Beach.

Next Week – Keep heading south along the west coast of Florida with potential shore excursions in St. Petersburg, Tampa, and Sarasota.