Eric here catching you up to date on the latest travels of Still Waters II as she makes her second voyage around America’s Great Loop. Click on this link to see the day- to-day travel log.

The crew spent most of the week doing shore excursions from Marathon because the winds kept the boat parked safely in a slip.  Wednesday the weather forecast allowed the crew to make the move to Key West.  On Friday, the crew started back to the main land, with their first stop at Stock Island.  Saturday, they made the run to Bahia Honda State Park.

The crew made several shore excursions, including: Sombrero Beach, Bahia Honda State Park, and a bus trip to Key West.  A guest blog chronicling the visit of Dave and Martha W. should be posted soon so I will pass on describing these events for now.

But a few pics to whet your appetite while we wait for their adventure report.

The weather forecast showed that the winds were supposed to be laying down to 15 mph after blowing for several days over 25 mph.  The waves were also predicted to be less than 2 feet in a direction that would be following seas as the crew moved to Key West.

As often happens, there was a gap between the forecast and reality.  The winds were more in the 17 mph or greater range and the waves were hitting the boat on the beam which made for a very rolly ride for the first seven miles.  Check out the video as we rocked and rolled to Key West.

As the crew continued towards Key West the waves calmed down from 3-4 footers to 1-2 footers.  As the waves calmed down, so did the nerves of the crew.  The skipper thinks he heard rumor of a mutiny, but before any action was taken things smoothed out enough for a somewhat enjoyable ride to Key West.

After getting settled at the marina, Dave and Martha walked to pick up a rental car so they could get back to Miami and fly back to Texas.  The crew used the car to go have a celebratory dinner at Hogfish Bar and Grill.  A worker at the rental car place recommended the joint.  The crew had never heard of Hogfish, but it sure was tasty.

The visitors got up early and left for Miami at 0500.  After saying good bye, our crew went back to sleep.

After waking up a second time, the crew decided to take the Hop-on-Hop-off  Trolley Tour.  Stop 6 was only a short walk from the marina so the crew caught the bus for a fun day.

While making their way around to stop 9, Fort East Martello, the crew learned that Key West was held by the North during the Civil War.  The North built three forts about 1.5 miles apart to ensure they kept control of the Key.

This all occurred in response to the US Border Patrol setting up a roadblock and inspection point on US 1 as it returned to the mainland.  The inspections were causing 2-3 hour delays as tourist were trying to get home.  These delays and missed flights out of Miami airport began to hurt the tourist industry in the Keys.

The publicity stunt worked and the federal government stopped the roadblocks once they started getting negative press because of the Conch Republic.  The Prime Minister even declared war on the US, quickly surrendered after one minute, and then applied for one billion dollars in foreign aid.

There is still time to make it to Key West and join the fun at the 35th Conch Republic Independence Celebration festival from Friday, April 21st through Sunday, April 30th. 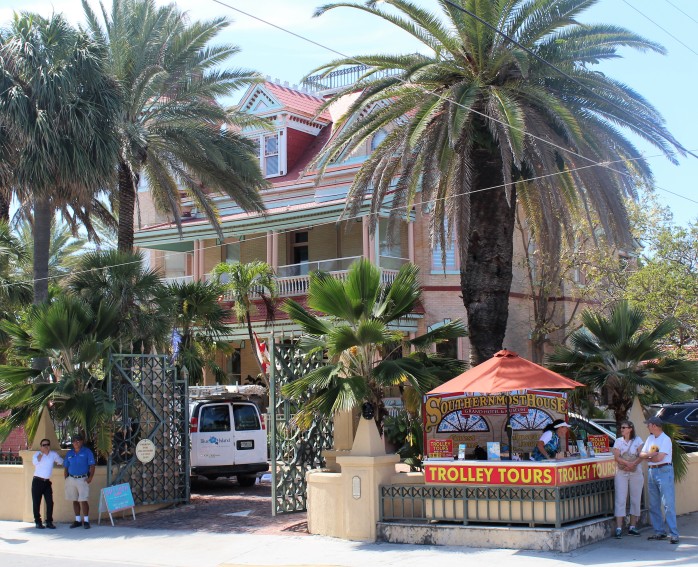 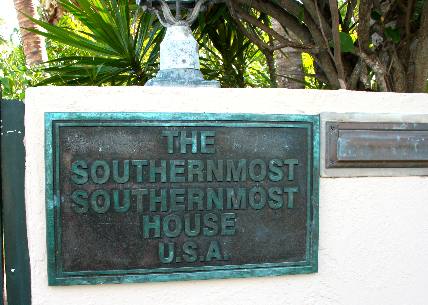 The crew also learned that the southernmost marker has an error.  If you notice, the marker says that it is 90 miles to Cuba.  Well, it is actually 98 miles to Cuba.  The error was made by then President Kennedy in a speech following the Bay of Pigs debacle.  The error has continued to be reported and repeated all the way to our present day.

And just for fun, the skipper got this photo of the southernmost fire hydrant.

At stop 1 the crew had to Hop-off the Trolley and re-board another Trolley.  They wandered around Mallory Square for a bit before hopping back on a Trolley to go have a late lunch at the southernmost 5 Guys.

After lunch, the crew walked to Stop 8 and hopped back on the Trolley to  return to stop 1 to enjoy the Sunset Celebration that takes place nightly at Mallory Square.  While roaming around the square, the skipper found this interesting Civil War Memorial.  The memorial is dedicated to the Union soldiers who served during the war.  Not all the folks on Key West were Union supporters though.  Just as the Northern troops in Key West were surrounded by southern confederates, so too is the Union Memorial surrounded by a southern memorial fence.

About 1700, street performers begin arriving and setting up for the evening activities in Mallory Square.  There were people doing acrobatic juggling acts, sword and fire swallowers, live music, coconut man, and about four hundred other folks to watch the acts and sunset.  After the sun went down, the crew walked the 1.5 miles back to the marina to bring the day to an end. 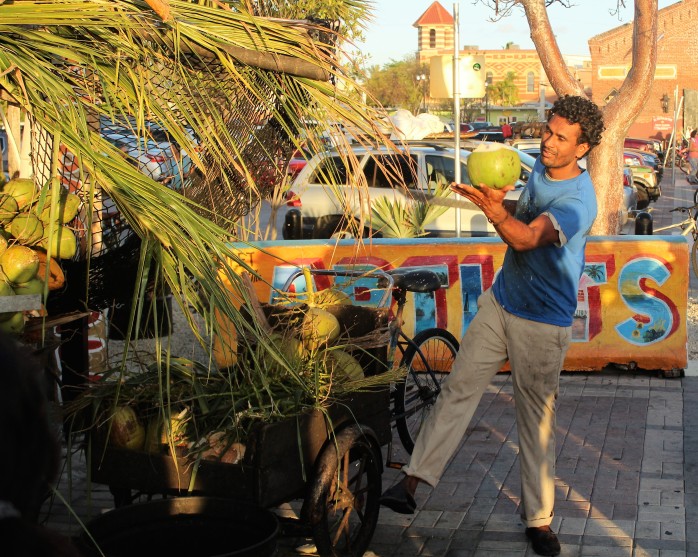 Then after the sunset there was the strangest talking mime act. 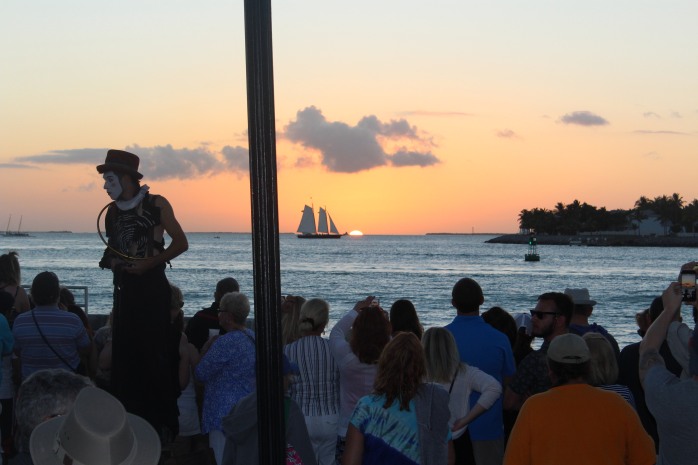 The Admiral spent the morning provisioning while the skipper got the boat ready to start back towards the mainland.  The cheapest fuel in the Keys just happens to be about 14 miles away so the crew set out for Stock Island to fuel up.

The term ‘key’ is thought to derive from the Spanish word ‘cayo’ for island.  The Florida Keys are made up of about 800 islands, 32 of which are inhabited.  Of these 800 keys, Stock Island is one of the few that carries the name Island.  Inquiring minds learned that the Cayos were named back in the days when Spain ruled Florida.  Once the British took over the names were anglicized to be Keys.

Check out the video of the day’s run to Bahia Honda.

The crew cast off and headed towards the 7-mile bridge where they planned to spend the weekend at Bahia Honda State Park.  The park has a marina, but the entrance channel is only 3 feet deep at mean low tide.  The crew hoped to arrive in time to make it through the entrance canal before the low water would block them from entry.

They arrived two hours before low tide, but while trying to enter they quickly found 3 foot 9 inches on the depth gage.  Rather than go aground, the skipper backed the boat out of the channel and went over and dropped the anchor for the rest of the day.

High tide is expected at 2130 tonight.  The crew does not want to chance a night entry into the State Park basin so they will stay on the hook till morning.  High tide should be around 0800 in the morning.  The crew will raise the anchor and motor into the basin on Sunday morning at hi tide.

The crew plans to continue north back to Del Ray which is between West Palm Beach and Ft. Lauderdale.  The Admiral has a friend who has recently purchased a house in Del Ray, and the crew will see if they can rendezvous before heading over to the Bahamas.