Dave and Martha reporting on another amazing trip with the crew of Still Waters II.  Being over a year since the last visit, Dave was more than ready to get back on the boat.  Martha, on the other hand, was just ready to see Claudia and Dave again.  This time they brought their “world traveler” son with them, Mark.

As always, Claudia treated them all like royalty.   She prepared every meal, made anything they wanted (cream puffs, brownies, brownie batter, cookies, etc.),  and never let them help her.  It was wonderful.

So now for the trip report.

First night was in Miami where they walked through a row of food trucks along the water. They had already eaten so didn’t try any of them, but they sure looked and smelled good.

Day 2 was spent traveling to Key Largo.  It was a great day to spend on the water.  Martha didn’t even think about wearing a life jacket like she had the first time she was on the boat.  It was such a different, beautiful view of the Miami skyline from the water. 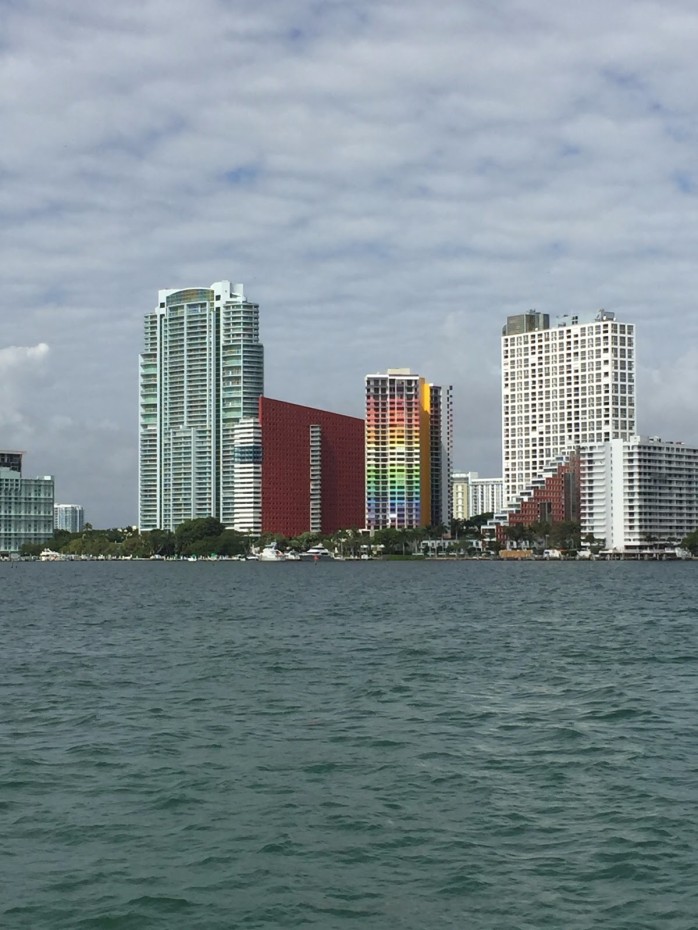 That night was spent at the Anchorage Resort and Yacht Club in Key Largo.  It was nice because the pool and hot tub were just steps away from the boat.  A spectacular sunset could be seen from the boat as well.

The next day started early because they were trying to beat the winds to their next destination, Marathon, Florida.  It too was a great day to be on the water because the wind was at their backs and the waves didn’t affect the boat.  Even spent part of the trip laying on the bow of the boat. 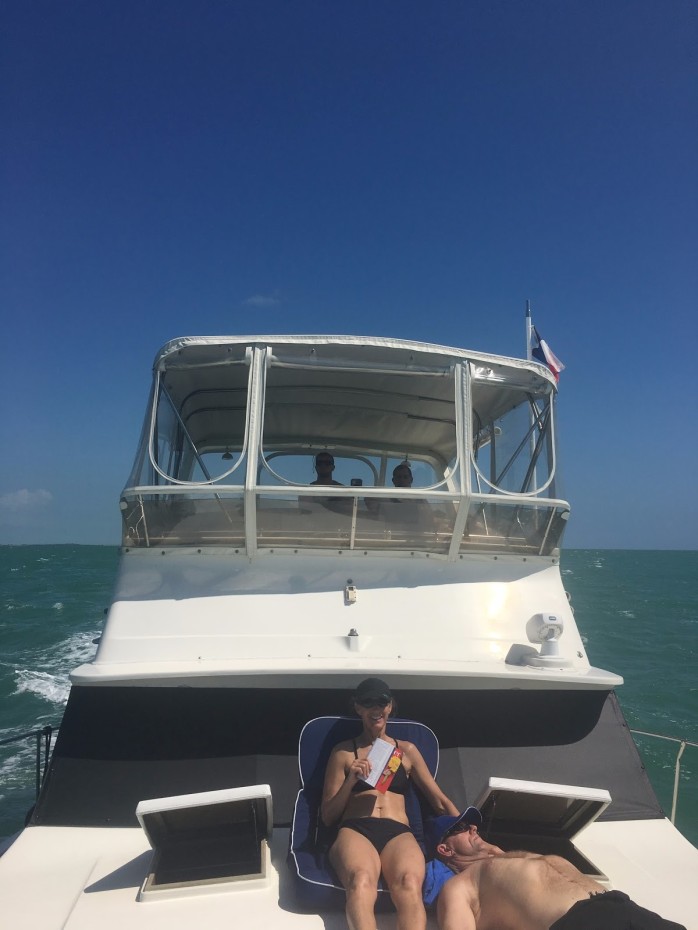 After docking at the Marathon Marina, everyone got off to explore the area.  A very nice pool was discovered so the guys had to try it out while the girls checked out the other amenities.

Turns out that the crew and guests took up residence here for the next few days because of the unfavorable wind predictions.

Saturday started with a walk/run to Sombrero Beach, about five miles from the marina.  (Martha ran, the boys walked.)  Dave W. was the only one brave enough to get in the water.

They walked back to the marina where they all jumped into the warm pool.  Nothing like sitting in the pool while looking out over the blue ocean.

Every night was spent watching amazing sunsets just behind the 7 mile bridge. 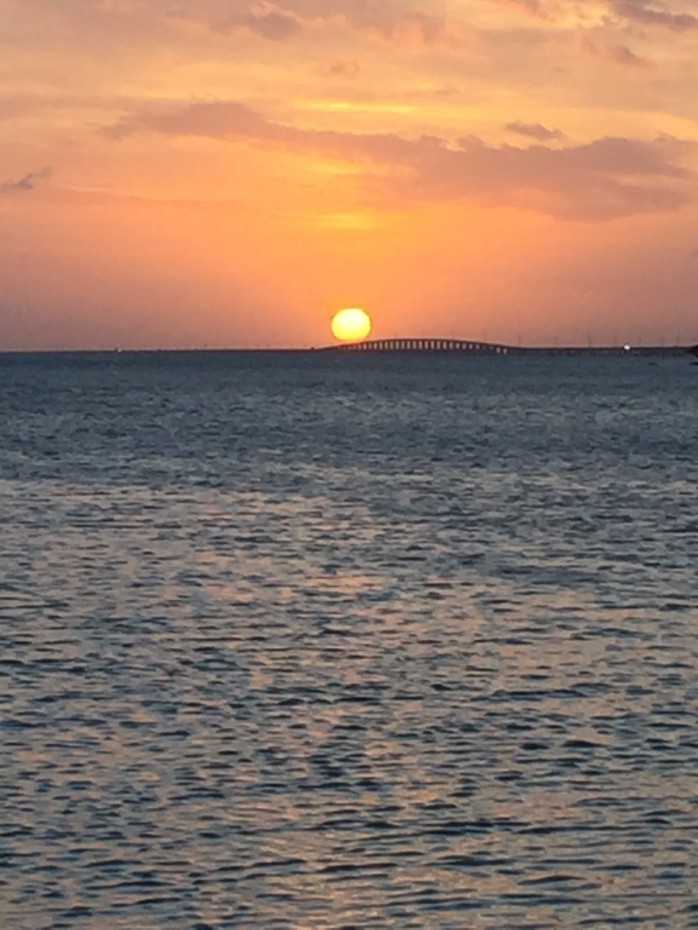 Sunday consisted of walking to the Marathon Community United Methodist Church to attend their service.  It was a treat to hear James McDuffy provide and lead the music.

After lunch, they called “Bob Narley Taxis” to take them to the Bahia Honda State Park. First site to catch their attention was a huge sand sculpture, 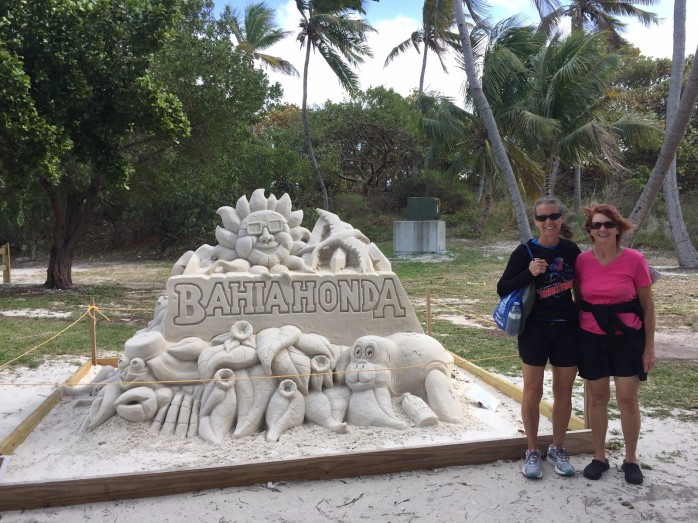 followed by the Old Bahia Honda Bridge, then a trek to the beach. 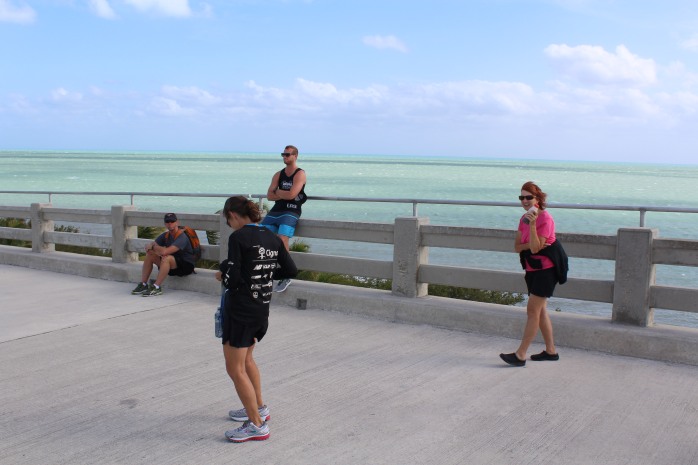 The bonus for the day was finding a  crab pot float for Dave to use on his anchor.  Back to the boat in time to see another awesome sunset.

Since they still couldn’t make it to Key West by boat because of the winds, they decided to ride the bus there for the day.  The bus ride was an experience in itself.  They met other “Loopers” on the bus and heard all about their travels.

A walk down Duval Street,

with a stop to test ride a Strata bike that Dave F. almost bought, 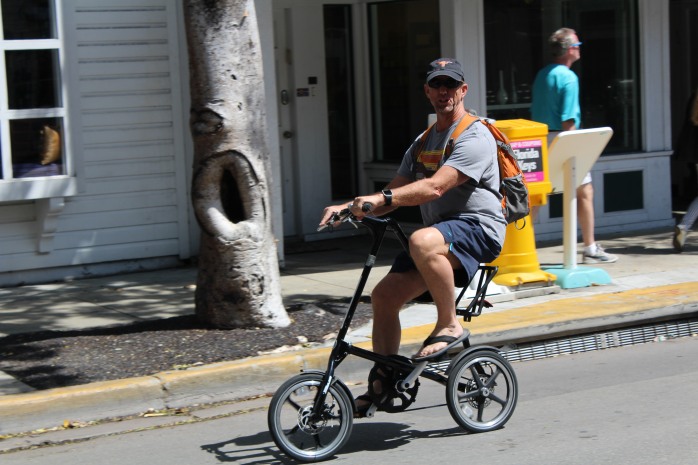 led to the landmark for the Southernmost Point in the Continental USA.

Lunch was at a very cool place called the Viva Saloon with live music. 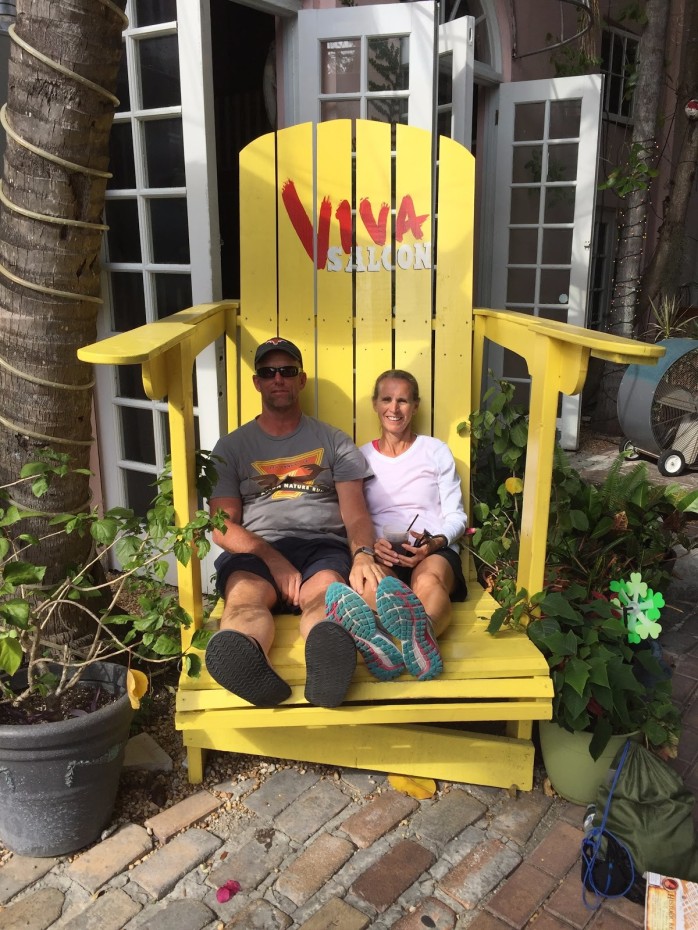 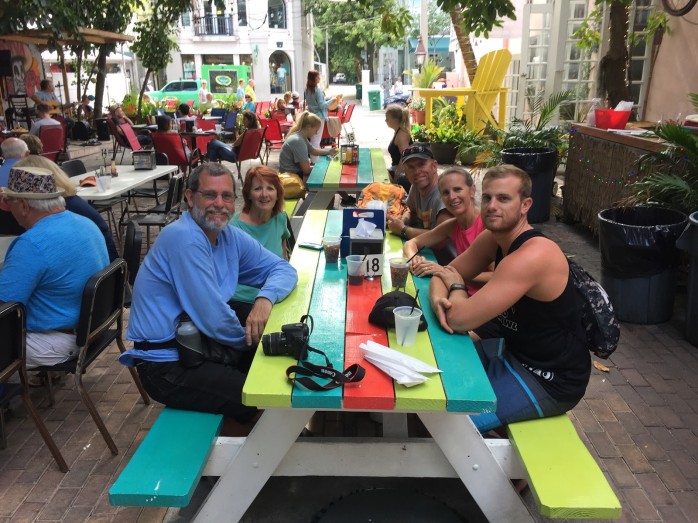 Other sites seen were:  The Oldest House, Hemmingway’s Home, the Rollin Reef’r,

the start of Hwy 1, and lots and lots of roosters.

Wednesday was the day to head to Key West by boat.  That was an experience that one will remember.  It was still windy, just not as bad as it had been, so the trip was a little rocky.  Martha kept her life jacket close by as she kept her eyes closed to keep from getting sick. Luckily, the ride did get smoother after a few hours. Coming into Key West, they saw a couple of cruise ships docked and numerous house boats of all types.

Very interesting to think people’s houses are on the water.

After docking and picking up a rent car they all ventured to dinner at a place called Hogfish Bar and Grill.  It was not a place you’d go if you just saw it, but it came highly recommended and turned out to be a great choice.  Finished dinner with a slice of key lime pie.

Dave, Martha, and Mark were up at 5:00 a.m. the next day to head to Miami to catch a flight back to Texas.  They can’t thank Dave and Claudia enough for the wonderful hospitality and great time and can’t wait for the next adventure!! 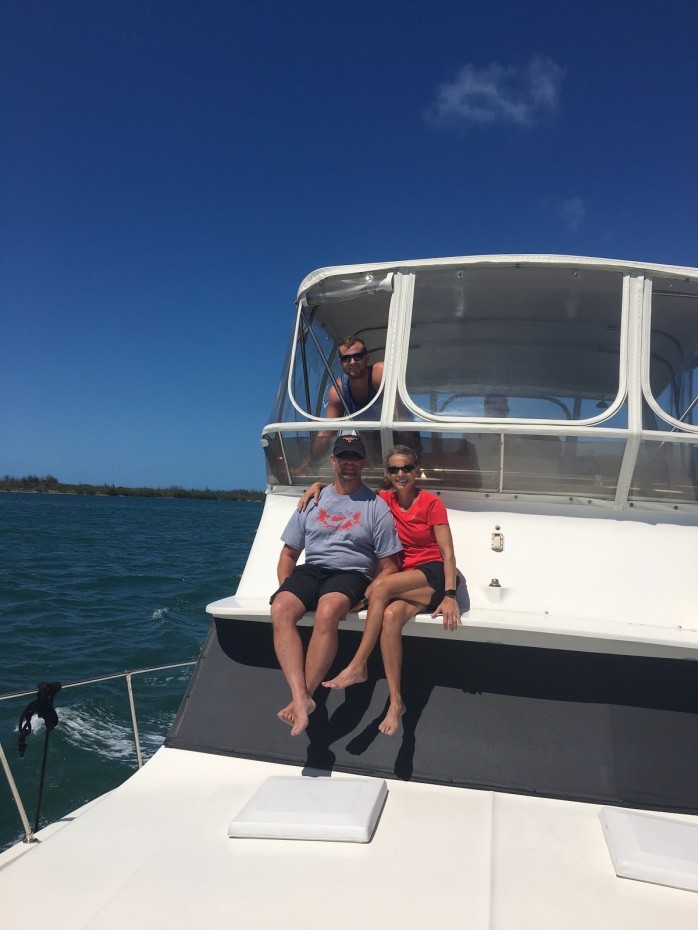