Eric here catching you up to date on the latest travels of Still Waters II. Click on this link to see the DAY-TO-DAY TRAVEL LOG.

I would also like to welcome Dirk and Pat, the crew of Wandering Star, aboard as our newest virtual crew members!  They will be launching their Great Loop adventure from Islamorada, Florida very soon.

The crew made the last 70 miles to Jacksonville, Florida on Sunday.  From Jax, the crew rented a car and headed to Texas for the rest of the week to go spend some time with their grandkids. 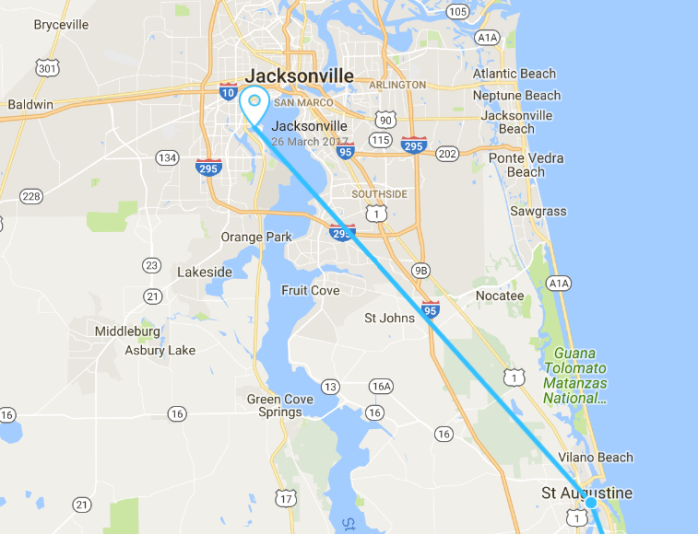 I have posted a short video of the run to Jacksonville, titled JAX

The run to Jacksonville from St Augustine is about 70 miles by the ICW.  The crew got an early start and managed to get off the dock just after sunrise.  When they left the marina and turned towards the Lion’s Bridge, there were two sailboats waiting for the 0800 scheduled opening.

Still Waters II could slip under the 22-foot bridge so the skipper was trying to navigate towards the bridge and stay clear of the two sailboats.  The smaller sailboat captain had not posted a look out and nobody was actually at the helm.  There was one person in the cockpit messing with some lines as the sailboat was making a collision course for Still Waters II.

As the skipper was trying to avoid a collision, the Admiral yelled over to the sailboat and got the person’s attention.  He immediately looked up and made a course correction to avoid pending collision.

After this near miss the crew had an enjoyable run to Jacksonville.  The wind that had been howling for the better part of all last week finally decided to take a break.  The water was finally extremely calm.

After a forty-mile run on the ICW, the crew came to the intersection of the ICW and St John’s River.  The crew turned left on the St. John’s River for the 26-mile run to Ortega Landing.

Upon arrival in the downtown Jacksonville area the crew could see that the Railroad Bridge was open.  Unfortunately, as they neared the bridge they heard the bridge horn sound and noticed the RR Bridge begin to close.  The skipper backed the boat down and waited for the train to appear and cross the bridge.  As you can see in the photo, Still Waters II would not make it under this 9 foot clearance.

The crew has not had much luck making this particular bridge.  Seems that they catch a train on the bridge each and every time they pass through Jacksonville. 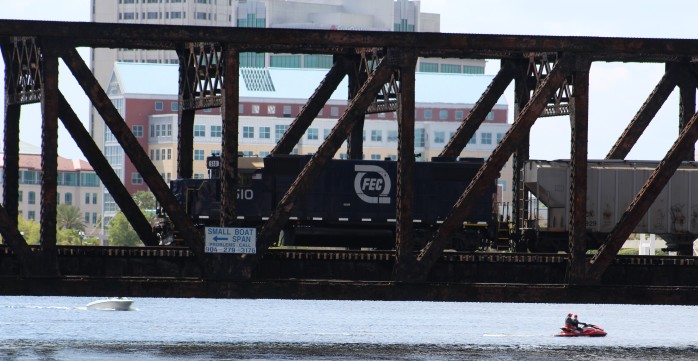 When the bridge finally opened, the skipper allowed all the small boat traffic to clear the fender area of the bridge before passing through.

After the RR bridge delay, the crew headed towards the Ortega River and the last bridge of the day.

Once on the other side of the above bridge, the crew headed to the marina to find their slip on the B Dock.  It was a tight fit in the slip, but the crew managed to stern Still Waters II into her berth.

The crew will keep the boat at Ortega Landing in Jacksonville until April 10th.  They will then move the boat up river to Huckins to have her hauled out and some work performed.  After she splashes back in the water the crew will decide when and where they are headed next.

For the 2017 season though, they do plan to head north and cruise the Down East Loop.