Who knew that Mary Kay gave out pink boats as well as cars?  A sport fisher in Norfolk with two men onboard, go figure.

The crew left Belhaven on Monday and went to the Alligator River Marina to stage for the Albemarle Sound.  Tuesday found our crew anchored in Blackwater Creek.  On Wednesday they made the short run to the Top Rack Marina near Chesapeake and decided to stay two nights.  On Friday the crew went to Hampton to explore Fort Monroe.  They ended the week at Wormley Creek Marina on the York River,

At the Box Office, this week is a video tour of the run thru the Virginia Cut, a few bridge openings along the route, and locking thru at the Great Bridge Lock.

Click on the link to the Still Waters II Vimeo site.

The skipper likes to say that “No job is as easy as it looks.”  This was true today when he went to replace the alternator belt on the starboard main engine.  The belt had broken while travelling to Belhaven.  The skipper had a spare belt for such an occasion so he broke out the new belt and climbed down into the engine room to find that he would have to remove the raw water cooling pump belt to install the alternator belt.  Bummer!

After several minutes of looking at the engine and trying to figure out how to remove the raw water cooling pump belt, the skipper climbed out of the engine room and found his ‘smart book’ on these Caterpillar engines.  After reading for a while, the skipper finally found the section on removing the belt.

He climbed back down into the engine room to discover he could barely see and reach the bolts he needed to loosen to remove the belt.  The skipper began his boat yoga routine and managed to squeeze into an area where he could loosen the three bolts.

From there he had to wiggle back out of the space and climb out of the engine room, and then climb back down into another hatch in the engine room.  After more boat yoga, the alternator belt was installed and tightened.

The skipper decided to squirm around and see if he could get in a position to install and tighten the raw water cooling pump belt.  He managed to get between the fire extinguisher and the generator and complete the task.  Somehow, he managed to get out of the tight space and climb out of the engine room for the last time today.

Not bad, that thirty minute task only took three hours. 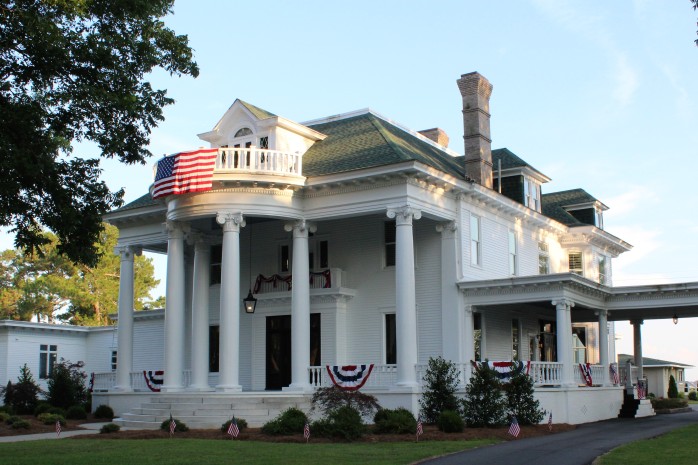 Later in the afternoon the Admiral noticed the crew of Lacuna entering the beak water and heading down towards the Belhaven free dock.  The skipper and Admiral jumped in a golf cart and drove down to see Mike and Jen.  However, our crew could not find where Lacuna had landed.  Our crew went back to their boat and noticed that Lacuna had posted their location in ‘Meets’ on the AGLCA App .

Our crew took the golf cart back down the water front and saw Lacuna motoring back up the river.  Then they stopped and turned around.  Next, they dropped anchor.  Our crew decided that it just was not meant to be to see Mike and Jen today.

The two crews sat around and shared stories of their Loop adventures.  Most interesting was Mike discussing Lobster and Conch gathering while they were in the Bahamas.

The skipper had begun to notice over the last two weeks that the starboard engine seemed to be using twice as much fuel as the port engine during their runs.  This was a bit of concern so the skipper set about to try and figure out what the problem could be.

Yesterday, while performing boat yoga in the engine room, he noticed a fuel cross-connect valve partially opened.  He closed the valve.  On todays run the skipper monitored the fuel tank levels closely and all seems to be working properly again.  Both engines used the same amount of fuel today.  The valve miss-position was allowing fuel from the starboard tank to recycle back into the port tank.

The valve must have got bumped open by a bucket getting tossed around when in bad seas.  The skipper has locked the two cross-connect valves shut to prevent reoccurrence.  He is also moving the bucket.

The days cruise was hot and muggy.  The temps rose into the low 90’s with an 88% humidity.  With practically no wind, this made for one long miserable hot cruise.  Rather than anchor out as planned, the skipper secured a slip at the Alligator River Marina.  Once docked and the shore power cable breaker closed, the skipper turned on the air conditioners.

Then they walked over to the Shell Station and had a wonderful, never frozen, fresh ground meat hamburger.

Today, the crew cruised 57-miles and arrived in Virginia. 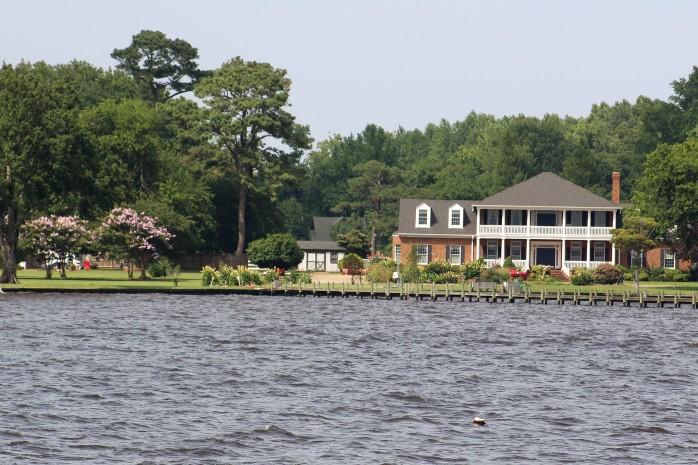 The sail across the Albemarle Sound was pleasant but the visual of the naked man standing up sailing his boat was too much for the skipper to take.  The Admiral waved at the guy but did not notice the butt crack because she did not have her contacts in.  That’s her story, and she’s sticking with it.

The skipper did see this Osprey catch a catfish though.

Then she flew right beside the boat prior to landing in her nest.

Surprisingly, there were not many folks on the water today.  After stopping, lightning and thunderstorms were all around the boat.  Looked as though the lightning was several miles away, but the rolling thunder was deafening.  May be the only fireworks the crew sees tonight.

Anchored at Blackwater Creek before the storms hit.

The crew did not see a Bald Eagle on the 4th, but the skipper spotted this guy overlooking the waterway as they cruised by on the 5th.

Scenery along the Virginia Cut.

Looks like the baby Osprey chicks are big enough to start flying lessons.  This chick was getting some last minute coaching before the first attempt.  The chick is probably not listening because it is thinking “you want me to do what?”

After arrival at the Great Bridge Lock and standing out in the sun for twenty minutes the crew was zapped.  Good thing the marina is only a few miles after the lock so the crew can get in out of the sun and into some A/C.

The crew took a day off from life today and basically just sat around and relaxed, read, and refreshed themselves.  Back to real life and the cruising lifestyle tomorrow.

Waiting on a train to cross the railroad bridge so the bridge tender can open the bridge for the crew.

The skipper did not notice these two tugs come out a side channel.  The Admiral spotted and pointed them out.  The skipper could not figure out where the tugs were going so he finally pulled back on the throttles and slowed to a stop.  The tugs then made a right turn up the river.  The crew followed them for about seven miles thru Portsmouth and Norfolk . 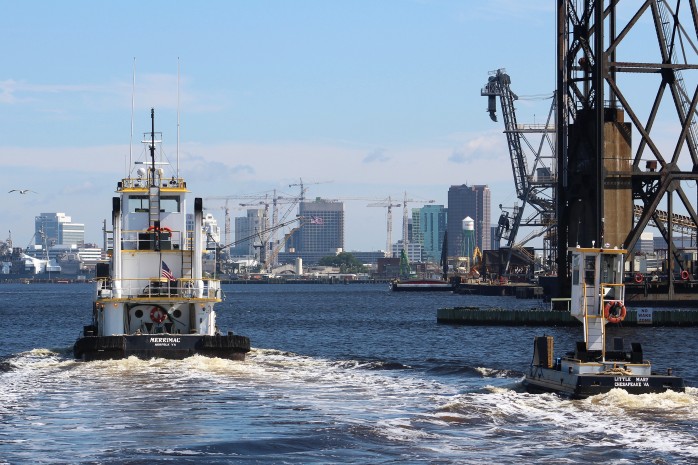 Still Waters II has been cruising the whole 1095 miles of the Atlantic ICW starting back in Biscayne Bay just south of Miami.  This red marker 36 is mile zero on the ICW in the waters of Norfolk.

After a short but rocky 21-mile cruise, the crew docked at Old Point Comfort Marina in Hampton, VA.  The weather forecast was for 10-17 mph winds with the 17 later in the afternoon.  The crew planned to be in Hampton around noon so they thought they would be secure on the dock before the winds got up.

Good strategy, poor execution.  As Still Waters II made her way towards Hampton Roads, the winds were kicking up over 20 mph with gusts to 30.  This made for an uncomfortable ride as the 3-foot waves were hitting the beam.

Met this big boy in Hampton Roads.  He politely told the crew to get out of his way.  The skipper quickly complied with the war vessel instructions. 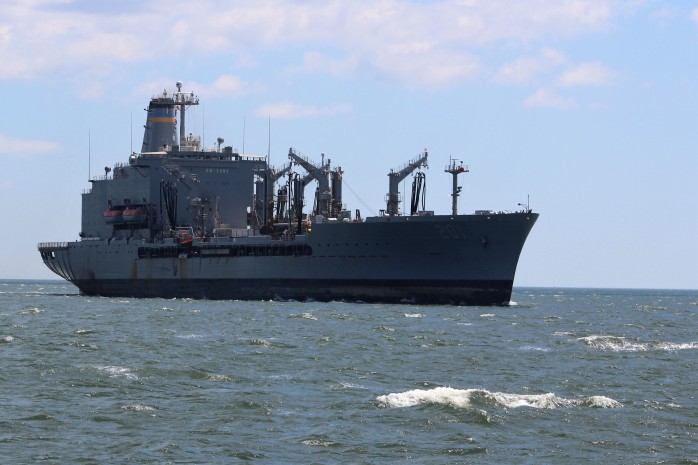 After getting tied up, the crew went walking around to explore Fort Monroe.  And can you believe it.  The wind died off to nothing in the afternoon.

Postern Gate at Fort Monroe, which is the largest stone fort built in the United States.  The Fort was built in 1834.

The moat around Fort Monroe. 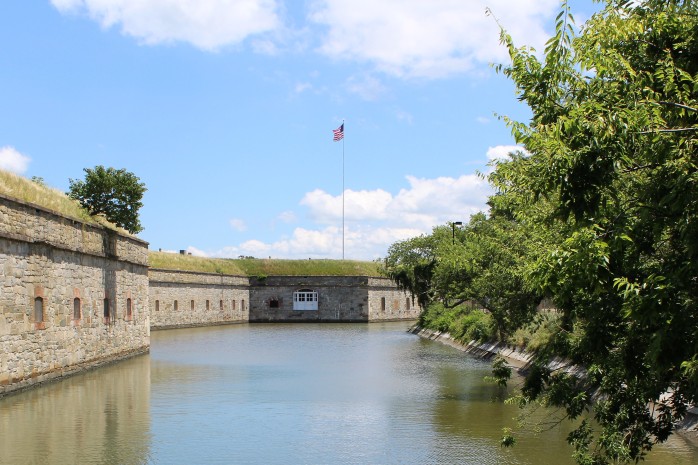 Robert E. Lee was stationed here and lived in Quarters #17.

Another famous American who served the Confederacy also lived at the Fort in this room. 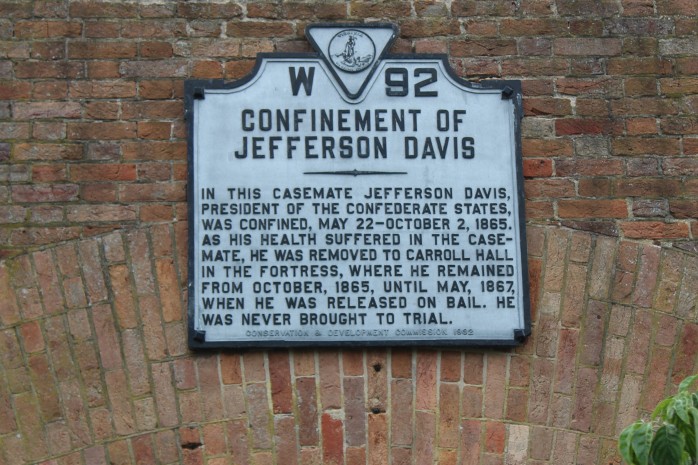 St Mary’s Star of the Sea Church was built in 1903 and still has an active congregation.

Old Point Comfort Lighthouse was constructed in 1802.  It is the oldest continually active lighthouse along the Chesapeake Bay.

The original Engineer Wharf  was built in 1818 to receive the building materials for the Fort.  It was also the location where the Fort received Jefferson Davis.  Today it is mostly a fishing pier. 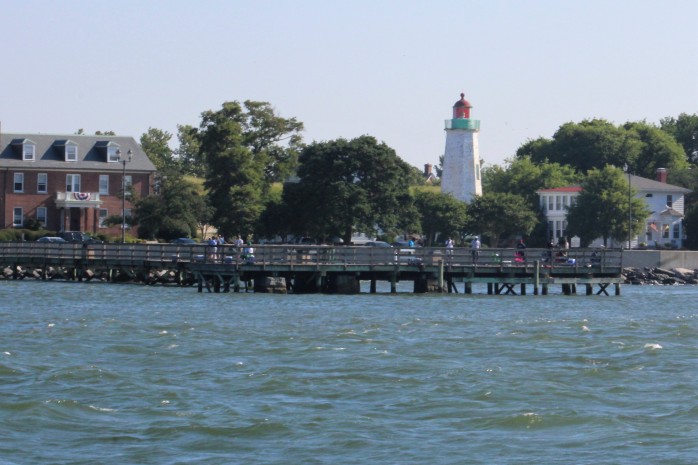 The crew headed out into the Bay to make their way to the York River for the weekend. 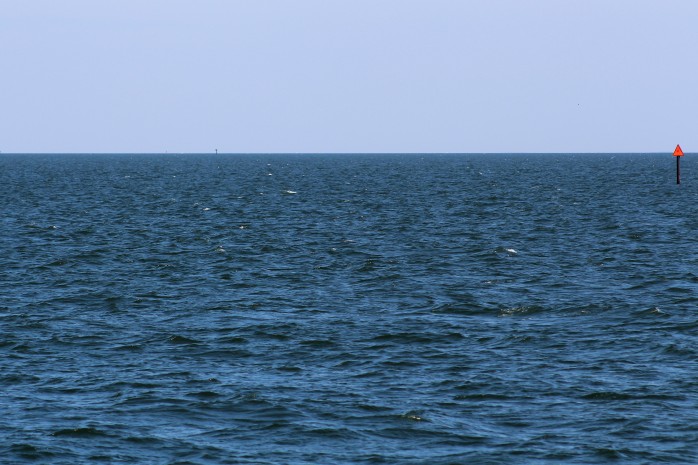 On the way towards Yorktown the crew crossed paths with this sailboat.

The slip at the marina was barely wide enough for Still Waters II so it took the skipper a couple of tries to shoehorn her into the slip.

The bath house is painted inside and out with art.  The outside has a picture of a commercial vessel named the Yorktown. 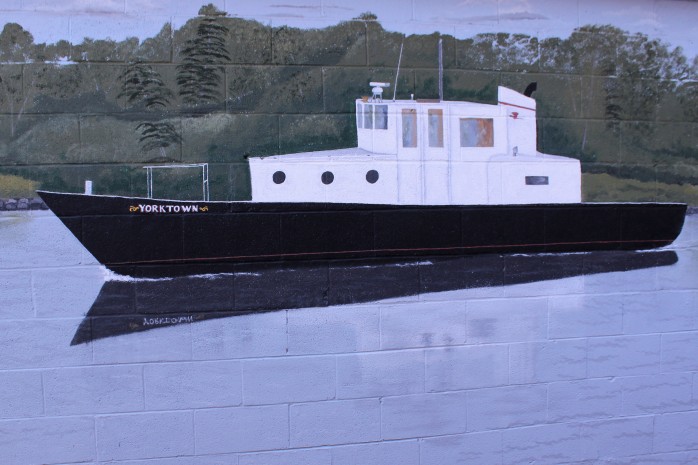 Inside was just a little bit creepy while this mermaid was given the skipper the eye while he was trying to do his business.

But God painted a beautiful sunset to end the week on.

Still Waters II has been cruising some big water lately and will continue to do so for the next couple of weeks.  The boat can take the heavy seas, the crew not so much.  So this boat name seemed appropriate for the week.

The crew will move to a boat yard on Monday to have a few electrical issues worked on.  Depending on how long the repairs last will determine how far the crew cruises North on the Chesapeake Bay.