We have a new virtual crew member this week: cdb13212, Welcome Aboard!

Some friends sent this picture of a ‘boat’ they saw cruising in Canada.  Yes, that is a outboard motor, on a raft, with a picnic table. 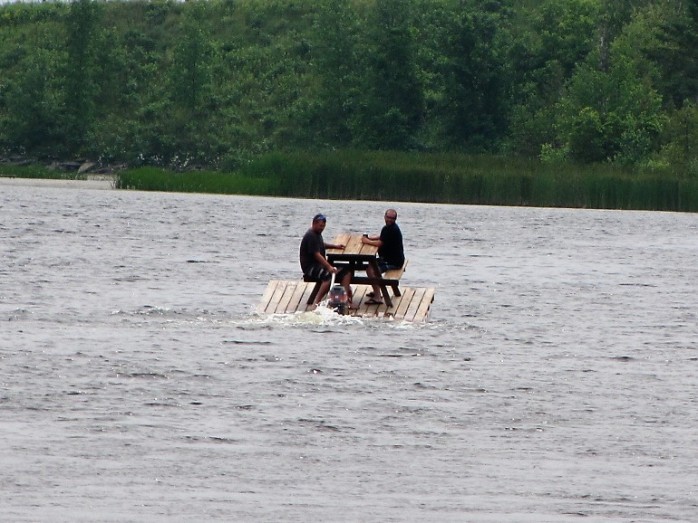 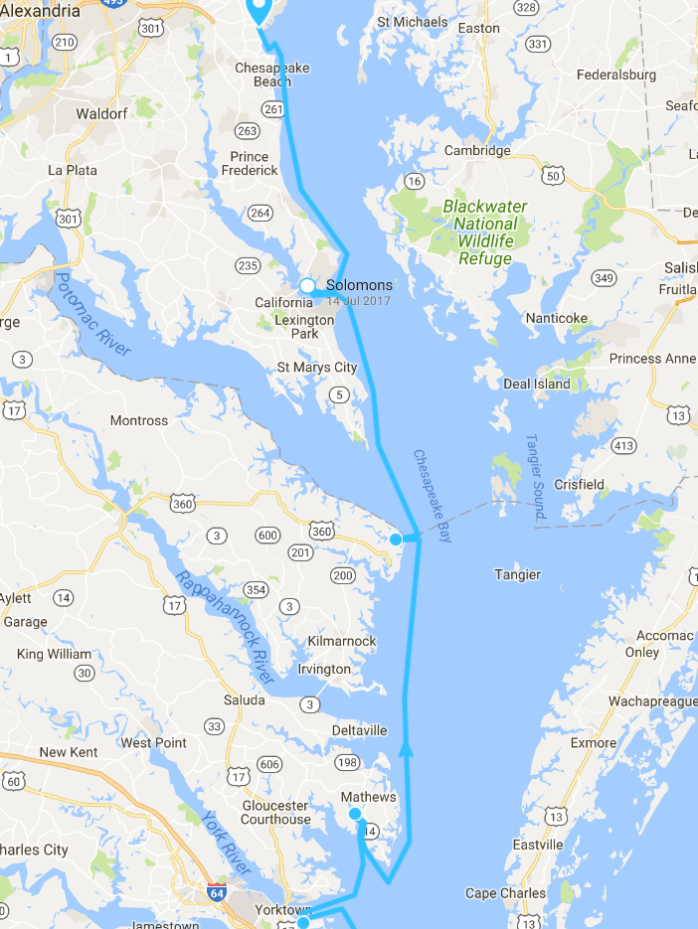 The crew has worked their way up the west side of the Chesapeake Bay.  They spent the first part of the week in Mobjack Bay getting some repair work done to the boat.  Then moved to anchor at Smiths Point for an exciting night on Thursday.  Friday they moved to Solomons and then on to Herrington Harbour North Marina for the weekend.

At the Box Office, no new video this week.

Click on the link to the Still Waters II Vimeo site

The crew made the 21-mile jump from the York River over to the Mobjack Bay and then up the East River.  The run was short but very picturesque.  At one point, the skipper decided to Navigate thru the Swash Channel.  The channel is narrow with only 1-3 feet of water if you drift out of the channel. 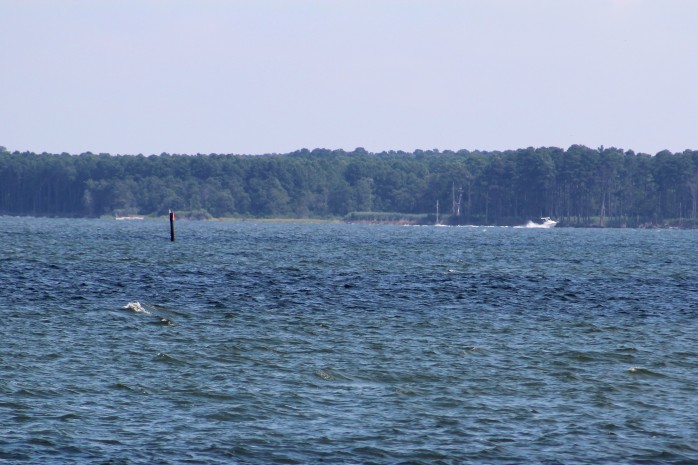 The risk of running aground was worth the 10 miles it shaved off the route.  At one point the mean low level on the chart showed only 5 feet in the channel.  However, the skipper timed it so they would pass over this 5-foot mark at high tide.  The crew showed 7 feet when they cruised over the low area.

The scenery along the East River banks: 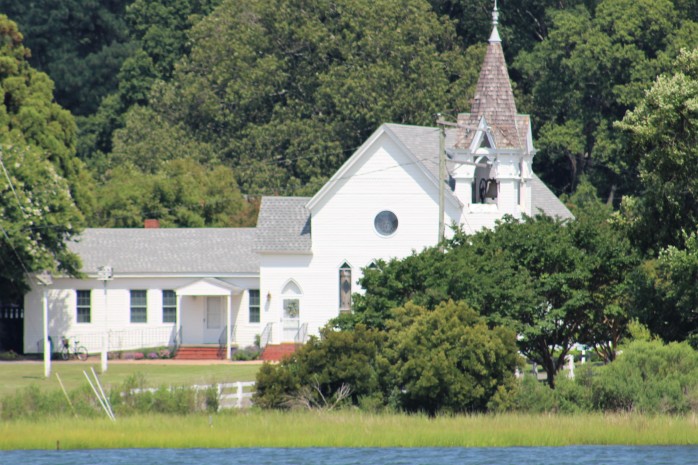 The boat yard was ‘Johnny on the spot’.  They were on the boat quickly and diagnosed the problem and got the part ordered for the oven.  Unfortunately, the part is coming from the west coast.  We will see when it gets here.

Still waiting on the part, we need to fix the oven, a thermal overload.  The electrician did find a short to ground in some electrical wiring, got the short repaired, and now the three lights that were not burning will illuminate again.

The crew decided to take the courtesy car into town and run a few errands.  They pulled into a Chick-Fil-A and were surprised to learn it was Cow Appreciation Day.  Everyone dressed as a cow got a free entrée.

The electric part for the oven arrived, the electrician installed the part, and got the oven working again.  The crew made plans to leave on Thursday at high tide so they could get out of the shallow cove that leads back into the East River.

In the meantime, the crew decided to go back into town to enjoy a nice meal and a Concert on the Green.

They ate at a place called Lulu’s Birdhouse that came recommended by an office worker at the boatyard.  The food was delicious.  The deserts, even better!

After polishing off the cheesecake and coconut cake, the crew headed down the street to take in the Concert on the Green sponsored by the local Recreation Department.  The duo played and sang Irish and Scottish folk music.  Very entertaining.

The crew set off for Smith’s Point late in the morning.  They saw a local YMCA group sailing sunfish sailboats as they left the East River.

They made their way past the New Point Comfort Lighthouse. 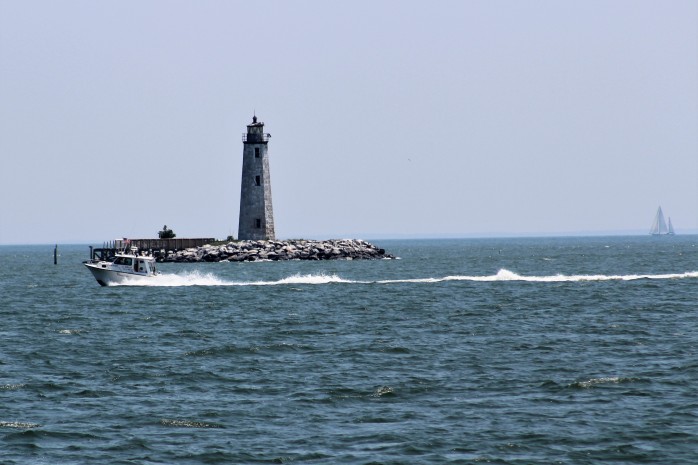 Then arrived at the Point Smith Light late in the afternoon.

The crew got settled amongst the many crab pots and tried to stay in the shade while they waited for the sun to set and begin to cool off a bit from the high of 96 today.  After the sun set the crew settled in to what was believed to be a hot night on the water.

The calm before the storm.

About 2300 lightening started so the Admiral woke the skipper and suggested he lower the antennae.  He did and then checked his weather radar.  The storms were all several miles north of the crew with winds out of the south.  They were sitting in cloudless skies with stars shinning abundantly.

Just as the skipper was about to doze off again, he heard what sounded like rain on the water.  He got up and looked outside and noticed no stars, only a dark sky.  Then a high blast of wind hit him and then rain was blowing sideways rather than falling to the water.  He quickly shut the three boat hatches.  The rocking of the boat and noise woke the Admiral.  She started closing the windows on the sundeck.  The skipper hurried to the helm to check on the boat anchor.

The wind was pushing the rain so hard that it just looked like a blanket of water pounding the boat windows.  The skipper could tell that the wind was pushing the boat and dragging the anchor, but visibility was so poor he could not see the water below the boat much less any lights on land that might give a clue where they were moving.  He cranked the engines on and then fired up the chart plotter.  Before the chart plotter came to life both engines died.

And then just like that, the wind, rain, and clouds were all gone and the stars filled the skies above again.  The whole evolution from calm, to storm, and back to calm all took place in less than five minutes of time.  With visibility restored the chart plotter confirmed what the skipper could now see.  The boat was stuck in the mud about 10 yards from someone’s seawall.

The skipper got out one of his fishing poles and dipped the tip into the water to determine the depth.  The boat was sitting in three feet of water.  Her draft is three feet nine inches, so they were shoved up in the mud good.

The skipper found the tide tables and determined that high tide would be 0600 with about a foot of water.  That should be plenty to float them free.  While waiting on the tide to flow in and raise the water level, the skipper started using the anchor to try to pull the boat out of the mud.

The skipper would tug and pull on the anchor chain while the Admiral used the windlass to take up any slack that might form.  They maintained this effort for the next four hours and managed to move the boat a few feet away from the shore.  The skipper kept checking then water level and pulling on the anchor chain.

The efforts were finally rewarded about 0300 in the morning when a sounding showed the depth to be three feet nine inches.  The skipper went to the helm and fired up the port engine and she started and ran fine.  Good.  Then he bumped the throttle forward and the boat rocked and jerked forward.  Good again.  The skipper then started the starboard engine and bumped both throttles forward.  The boat rocked and lunged forward ever so slightly.  After bumping the throttles forward three more times, the boat finally broke completely free of the mud.

The skipper and Admiral then managed to get the anchor back onboard and they slowly moved into deeper waters while trying to dodge the landmine of crab pots that they now found themselves surrounded by.  The crew managed to navigate the crab pot field and finally found an area they could reset the anchor.

Then it was back to bed to get some well needed rest.  That was not to be either though.  At 0400, the first commercial fisherman started heading out to begin their work day.  Before the sun came up a little after 0600, at least a dozen fisherman in large boats with even larger wakes passed the boat.  The crew did not get much sleep the whole night.

The scene of the crime so to speak.  The boat was between the crab pots and that white seawall and rocks.

In the mornings, the skipper usually reads the AGLCA Forum.  This morning someone posted about the three H’s on the Chesapeake Bay this time of year: hazy, hot, and humid interrupted by 100 mph winds during thunderstorms.  Well the crew certainly experienced that last night.

The plan was to head over to St Mary’s City to visit the historic area and end the day with a concert in the park.  However, St Mary’s does not have a dock so one must anchor out and dinghy in to visit the town.  After the misery of last night, and the weather predicted to be in the high 90’s with greater than 88% humidity the crew decided to pass St Mary’s City and push further north where they could find some A/C.

The cruise across the mouth of the Potomac River was rough, but after the crew got to the north shore of the river the waves calmed down.

With winds out of the west-southwest, the crew had following seas with one foot swells pushing them all the way to Solomons.

The Point No Point Light out in the Bay. 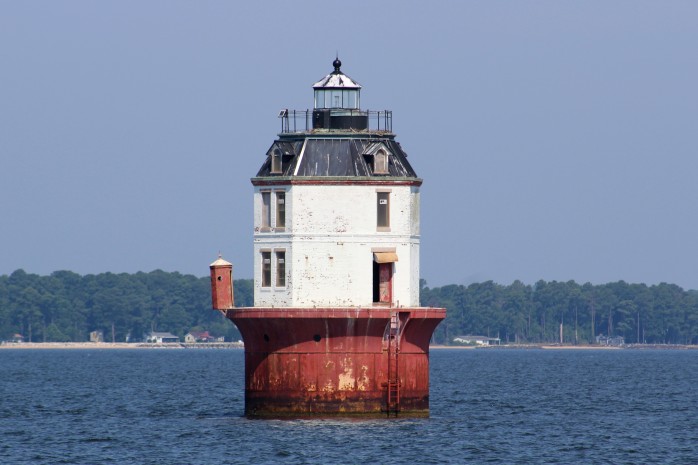 Upon arrival at Solomons they witnessed a large fleet of sailboats racing.  The skipper counted 35 boats in the race.  However, they were glad to finally get off the Bay and into Solomons.

After getting tied up and secured along the dock, the skipper got the shore power hooked up and the A/C units running.  The power kept tripping on the marina power pole so the skipper finally hooked the shore power cable to a different shore pedestal and they have had no further issues.

Because of the heat and humidity, the storms rolled through again.  The good news is that it cooled things off a bit.  The boat A/C units were struggling to bring down the temps inside the boat.

The sailboat race that the crew witnessed yesterday continued on Saturday.  The sailboats were all headed out to the Bay the same time our crew was leaving.  There was energy and excitement in the air as the sail boaters were maneuvering to the start line.

After weaving and dodging sailboats the crew got back in the open Bay.  They stayed a mile or so off shore which gave a smooth ride due to the northwest winds.  The wind did not have a chance to kick up any large waves.

This guy is living on the edge. 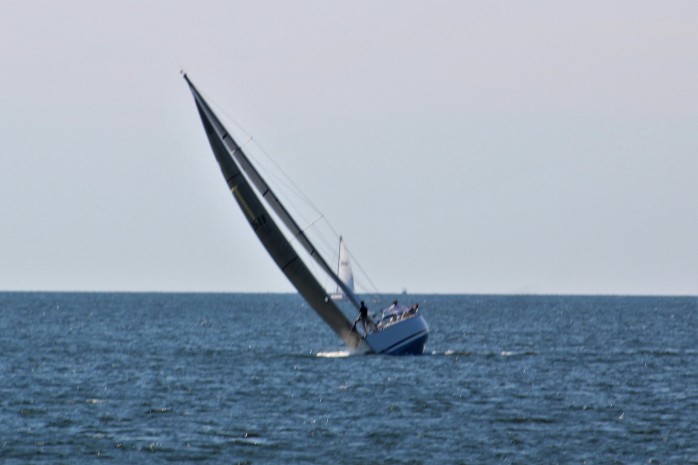 Cruising past the Point Cove Lighthouse. 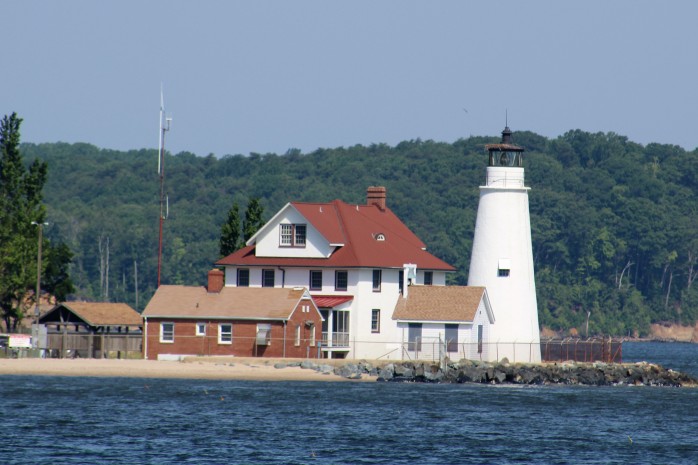 The famous Calvert Cliffs along the western shore. 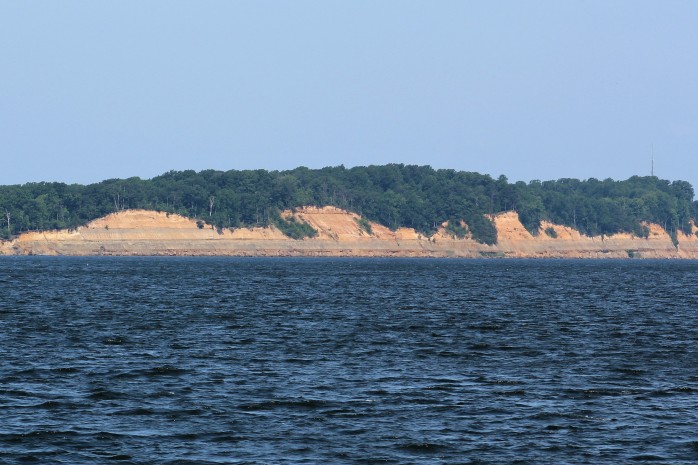 Upon arrival at Herring Bay, there was another large crop of sailboats out in the water.  The skipper had to slow to negotiate around all the Saturday Sail boaters.  This shot is of the boats coming and going out of Herington Harbour.

The marina is one of the nicest the crew has stayed at on this adventure.  The crew enjoyed a complimentary showing of Beauty and the Beast last night on the marina grounds.

The crew has a couple of more stops planned in the upper Chesapeake Bay before crossing the C&D Canal over to the Delaware Bay.  They hope to make Cape May by next weekend, if the weather cooperates.