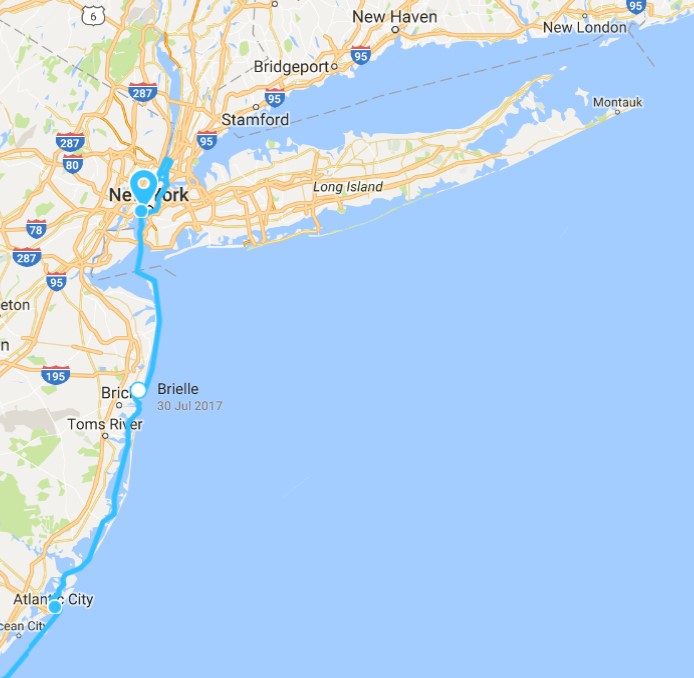 There is no new video this week because the skipper somehow saved the video on the computer and now cannot find the video anywhere.

Click on the link to the Still Waters II Vimeo site to see past videos.

Because of the high winds Friday night and all day and night on Saturday, the Atlantic Ocean waves were predicted to be greater than four feet all day.  With that prognosis, the skipper decided that the crew would take the inside route up to the Manasquan Inlet.

The Admiral correctly remembered that the current could be bad at the marina and was not to keen on stopping there again.  Her intuition would prove accurate later in the day.

The first surprise of the day turned out to be the scenery.  Just shortly after leaving Gardiners Basin, the crew found themselves in a salt marsh.  The area reminded them of the marshes in the Carolinas and Georgia.

A look back over the salt marsh at Atlantic City.

The second surprise of the day was the amount of boat traffic out on the water.  Seems everyone with a boat was out enjoying the nice weather.  The crew had been warned that there would be many boaters on the water in New Jersey on the weekend, but this was crazy.

The skipper headed north with the red markers on starboard and found himself in five foot of water in just a few minutes.  He slowed again and looked at Active Captain.  There was a hazard note claiming that the sailing line was on the wrong side of the red markers and that many people go aground at this spot.  The hazard note also mentioned that Sea Tow also patrols the area regularly because so many boats go aground in the area.

The skipper put the engines in reverse and began to slowly back out of the shallow water.  About the time the crew was clear of the hazard, a yellow Sea Tow boat appeared asking if the crew needed help.  The crew waved Sea Tow off and got back on the right side of the red markers.

The last surprise of the day came when the crew approached the marina.  The directions were to go to the fuel dock and do the paperwork to check-in.  The marina would then provide docking instructions for the slip.  When the crew arrived at a RR Bridge just before the fuel dock, the RR Bridge Tender sounded his horn signaling the bridge was about to close.

Using only the port engine, the skipper was able to rotate the boat away from the bridge.  He noticed that the end of the T-dock was open at the marina so he maneuvered the boat over to the dock and got secured.

While securing the boat to the dock the crew discovered that a line had fallen into the water.  Based on the starboard engine issue it appears the line must be wrapped around the shaft. With the office closed, there was nothing that could be done tonight so the skipper will have to deal with that first thing in the morning.

The skipper woke early and headed to the office to find a number to a diver to check out the situation under the boat.  The office called a diver who was in Brooklyn and he agreed to drive down and check things out.

After getting the line removed from the shaft, the skipper tested the engine and all seemed to be well.  Time to shove off and head to New York City.

Looking out the inlet, the seas seemed to be calm which would make for a beautiful cruise to the Big Apple.

Looking down the coastline as the crew left Manasquan, the New Jersey shore was packed with folks out enjoying the beach.

With so many people on the beach, the crew understands why they see so many airplanes dragging advertisement signs up and down the beach.  From Cape May all the way to Sandy Hook they could usually see two or three planes flying with advertisement. 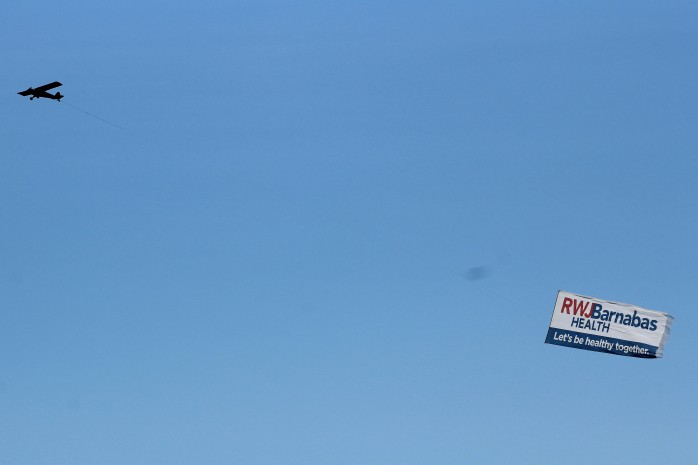 The crew arrived at the Verrazano Narrows Bridge, which is the unofficial entrance to the Upper Hudson Bay, about the same time as a large container ship. 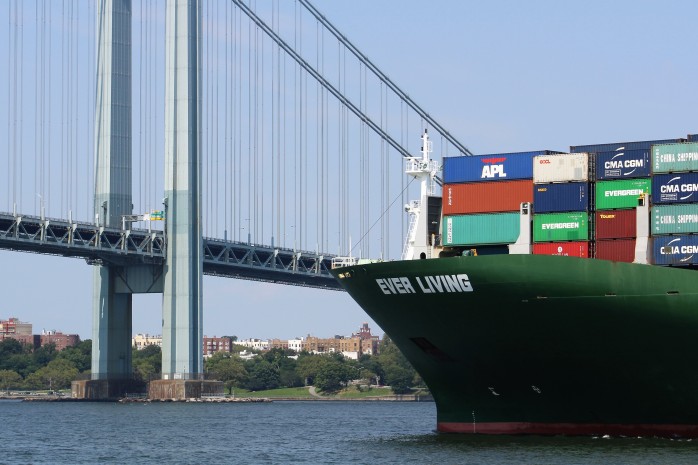 The next chore was to cross over and dodge all the ferry traffic to get a good view of Lady Liberty. 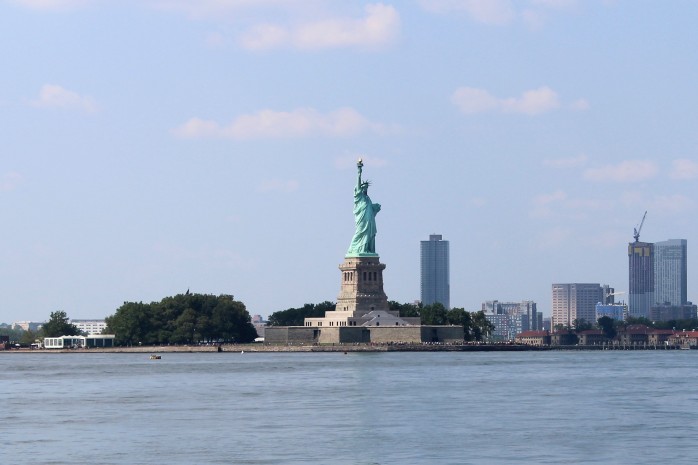 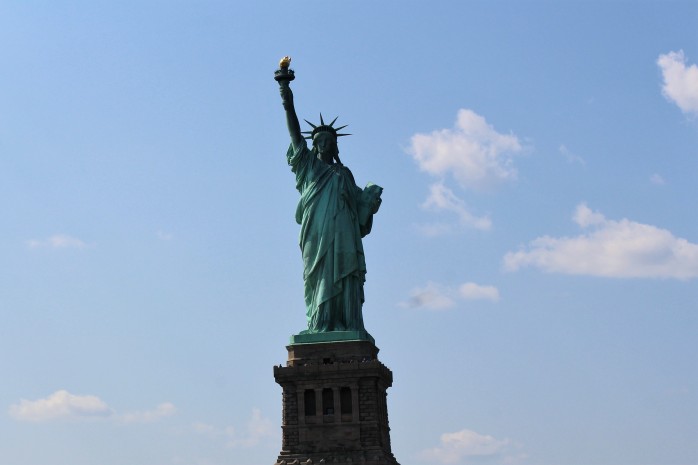 Then it was just a few miles or so to the Liberty Landing Marina.  The crew enjoyed the calm before the storm, so to speak, because four visitors arrive tomorrow.

The guests arrived a little after the noon hour and got settled onto the boat.  The Admiral fixed lunch for all, and then it was time for a four hour cruise around Manhattan.

The skipper guided them to the Statue of Liberty.  There were many tour boats loaded with visitors so the skipper was kept busy trying to stay clear of the tour boats. 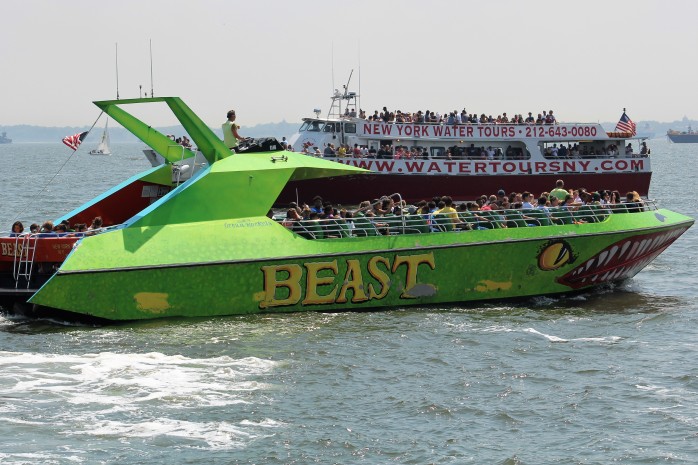 Then it was time to cross over and go under the historic Brooklyn Bridge.  It took 14 years to span the East River between Manhattan and Brooklyn.  When the 1,595 foot bridge opened in 1883, she became the first steel-wire suspension bridge and the longest suspension bridge in the world.

The view of the Chrysler Building from the water. 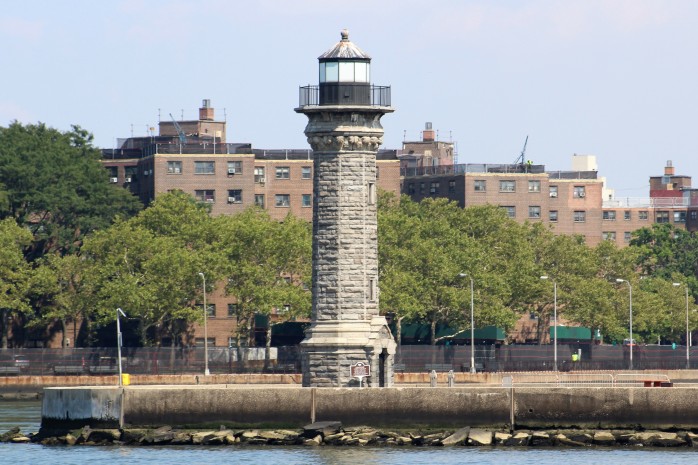 Last bridge headed back into the Hudson River.

Headed south on the Hudson River with George Washington Bridge in sight.

From there it was another six miles back to the marina. 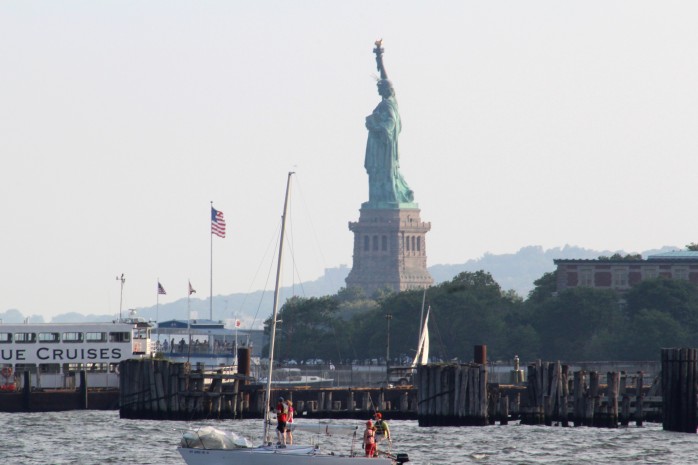 The guests should write a recap of their adventures in New York City so I will not go into any details at this time.  However, while the ladies were exploring Macy’s the skipper learned some history of the building in the background, the Hotel McAlpin.

This is where Jackie Robinson was living when he got the call from the Brooklyn Dodgers to break the color barrier in Major League Baseball.

But there is a lesser known tenant, that history has forgotten, that also lived in the hotel that had a large impact on the US court system, Harry K. Thaw.  Mr. Thaw killed Stanford White in an apparent revenge killing because Mr. White allegedly sexually assaulted Mr. Thaw’s wife, so the story goes.

Mr. White was in the upper levels of New York society, was an architect by trade, and designed homes for the rich and famous of the day, the Astor’s and Vanderbilt’s.

The murder trial was dubbed the “Trial of the Century” by the reporters back in 1906.  The first trial ended with a hung jury and the second trial found him not guilty by reasons of insanity.  Most remarkable considering that he killed a man with hundreds of witnesses after months of premeditated threats.

The trials made law history because it was the first time that a judge sequestered a jury in the US.

Mr. Thaw was an heir to a multi-million dollar fortune and his mother used the family fortune to keep her little boy out of trouble several times over the years.  She was the front runner for todays helicopter mom.

Look this cast of characters up for some very interesting reading.  O.J. Simpson does not even hold a candle to the escapades of Mr. Thaw.

Lastly, it was very interesting walking around and seeing New York through the eyes of two young teenage girls.  They relate everything back to some movie or current music video.

For example, when they walked through Grand Central Station they were excited because this is the room where they rounded up the animals from Madagascar.  Forget about the beautiful building and paintings on the ceiling.  When they saw the clock in the center of the station it was, “oh look there is the clock that …..”

In Central Park they went on and on about some dog in a movie from Alaska that has a statue in the park.  They were so excited to have their picture taken with Balto.

Well, until they learned that Alice in Wonderland was in the Park also.  Balto quickly became yesterdays news.

Yes, it was certainly an interesting week.

Name of the Week

We did not see any outstanding clever boat names this week.

The crew will leave Liberty Landing on Monday and head into the Long Island Sound.  They should make a few stops on the New York side and then cross over into Connecticut.

← Sweetness, Four in One
Take Me Out to the Ball Game →

4 Comments on “Welcome to New York”