Eric here with the latest travels of Still Waters II.  But first a hearty Welcome Aboard to Bob K. as our newest virtual crew member.  Looks like you are in Colorado for your annual fly fishing adventure.  Remember, you cannot catch fish if the hook is in the air.

And look, the crew found your old boat at the Submarine Museum in Groton. 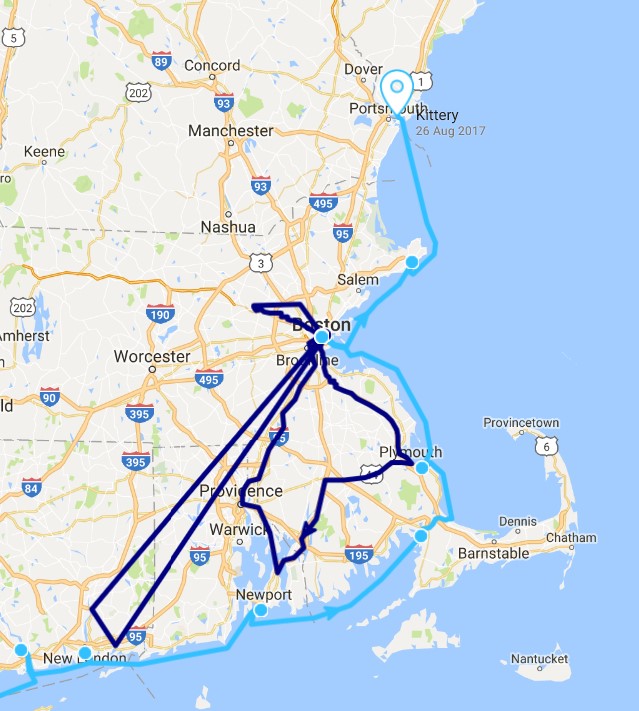 The crew rented a car and took three road trips out of Boston:

On Friday they got back to cruising the waterways and headed to Gloucester.  On Saturday they pushed northward to Portsmouth but could not find dockage in New Hampshire so they went to Kittery, Maine across the river.

Click on the link to read the day-to-day travel log.  This includes a weather report of the day, sea conditions, log of the days travel, and a summary of the experience. 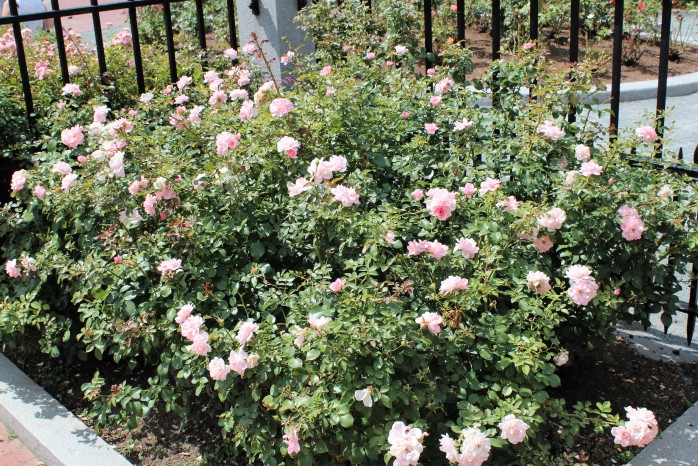 The crew had a leisurely day, walked around Boston some more, and grilled ribeye steaks.  The main objective was to find the Rose Kennedy Greenway Rose Garden down by the waterfront.  Rose was 104 years old when she passed away.  There are 104 rose bushes planted in her honor in the rose garden.  The Greenway itself is a 17 acre linear 1.5 mile park that runs through Boston along the old route of  JFK Expressway.

A film ran in the lower exhibit gallery that did an excellent job of telling the story of the Pilgrim migration from England to the Netherlands, and then on to the New World.  It took ten years to move the Pilgrims from their Dutch homes to Plymouth.  The Mayflower being the most famous ship bringing the Pilgrims to their new home at Plymouth in 1620.  The others:

The passengers on these first four ships were referred to as the ‘First Comers.’  The first Fullers arrived in the New World aboard the Mayflower.

There were two brothers who sailed over together.  They all survived the trip over and the landing. The two older men, Edward and Samuel signed the Mayflower Compact.

However, just a few survived the first winter.  Survivors at the end of year one.

One other thing the skipper learned about these Fullers was that Edward had two sons.  The oldest son, Mathew, stayed behind in the Netherlands and did not come to Plymouth until 1640.

After walking down to the waterfront to look at the famous Plymouth Rock, the crew headed to Portsmouth, Rhode Island to visit the Green Animals Topiary Garden.

The country estate was purchased by Thomas E. Brayton in 1877.  He hired Joseph Carreiro to be the gardener.  Joseph created most of the topiary prior to 1945.  Alice Brayton inherited the estate in 1940.  According to the workers at the property, Alice hosted an engagement party at the property for Jacqueline Lee Bouvier and John F. Kennedy. 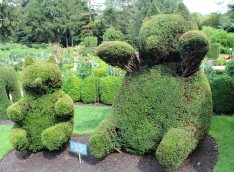 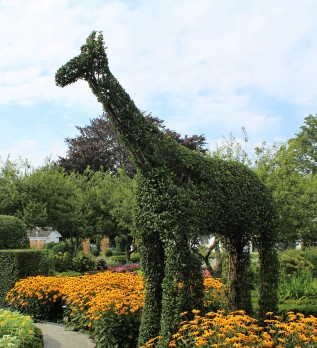 There was also a vegetable garden that was guarded by three scarecrows that were built in the 1940’s. 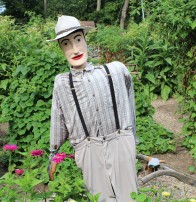 If you recall from your history lessons or last weeks blog, you might remember that Paul Revere rode to Lexington to warn John Hancock and John Adams that the British Regulars were on the way to arrest the two trouble makers.  Following the Revere path, the crew travelled to Lexington.  The British left Boston at nightfall on April 18, 1775 by crossing over to Charlestown.

Upon arrival in Lexington, the first thing that was a surprise was just how small the Greens were where the Minute Men met the Regulars.  Hard to imagine 70 Minute Men and 700 British regulars in the small space.

The other surprise was how the town folk of Lexington have a chip on their shoulder about where the first shot heard ’round the world was actually fired.  The folks in Lexington are quick to point out that the first shots and first Patriots were killed right here on the Lexington Green.  At 5:00 a.m. on the 19th, the British arrive and find 77 militia men on the Lexington Green.  A shot rings out and the British Regulars fire a volley.  After the shots, eight militia men become the first dead.  The militia scatters and the British Regulars continue to Concord rather than look for Hancock and Adams.

After walking around the Greens, the crew headed towards Concord along the Battle Road Trail. They stopped at the Minute Man National Historic Park.  The Visitor Center had an outstanding video that showed the timeline from when the British troops started their march towards Concord on April 18, 1775 to their return to Boston on April 19, 1775.

The Visitor Center also started the dialogue that the British were not out to arrest Hancock and Adams, but were actually in hot pursuit of four canon and arms for 15,000 men that had been hidden in Concord.  Their goal was to find and destroy the cache of weapons and ammunition.

Hancock canon that the British were after

The crew drove on to Concord on the Battle Road Trail and passed the location where Paul Revere was captured.  Upon arrival in Concord the crew found the North Bridge Visitor Center.

The Visitor Center described the events of the early morning.  The British Regulars arrive at 0700 and begin to search Concord for the arms.  The militia has moved to some hills outside of town to observe the British.  At 0900, the British begin to burn a small cache of weapons that they found.  At 0930, the militia heads to town to stop the burning.  They encounter British soldiers on the North Bridge.  The British fire and kill two militia men.  The militia returns fire and kill the first British soldiers of the day.  Both groups disperse from the bridge and no further shots are fired at the bridge.

There is a Colonist memorial on the side of the bridge where the minute men approached.

On the British side of the bridge is a grave of the first British Soldiers killed. 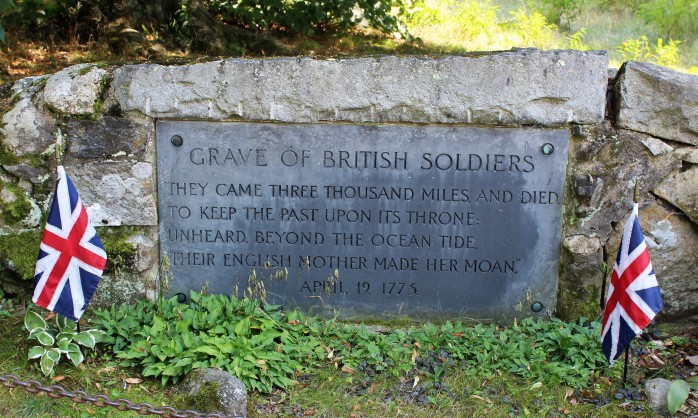 It would take the Declaration of Independence and another hard eight years of war before the Colonists would win the Liberty they so desperately were seeking.  Makes one stop and ponder what you would be willing to fight for to maintain the freedoms and liberty that we seem to take for granted.

After the war was over and the British were gone from the America’s, a war of words ensued that shaped the thinking of the young Americans and the generations that followed.  Interesting enough, some of these writers are buried in the Sleepy Hollow Cemetery in Concord.  They are buried on Authors Ridge in close proximity to each other. 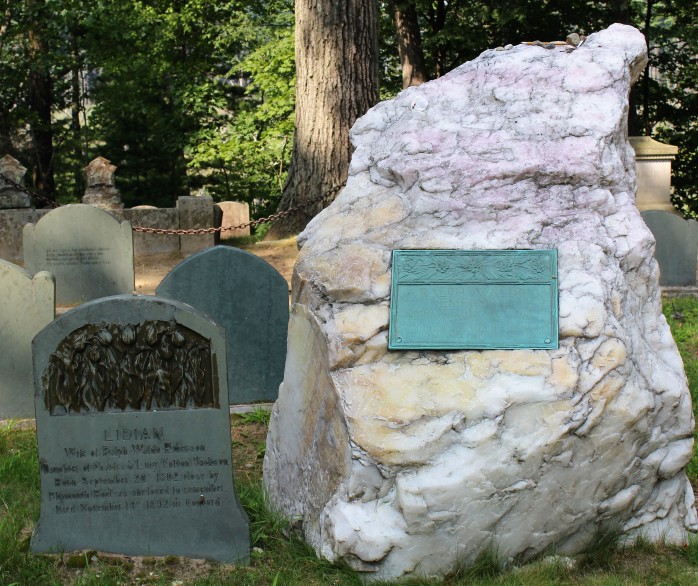 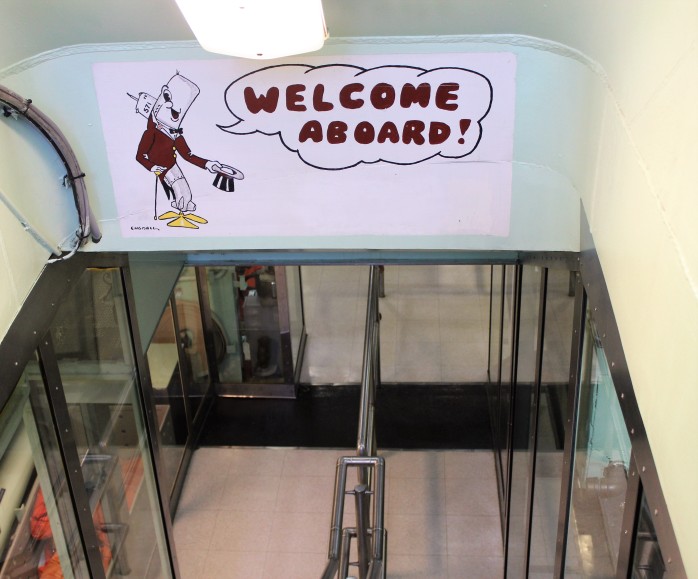 The museum told the history of development of submersible vessels.

The USS Nautilus thru the periscope in the museum. 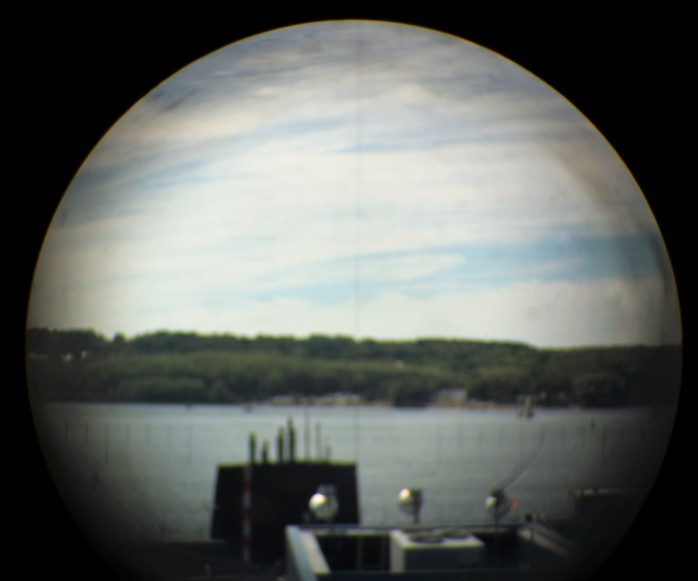 The skipper even found a display about the submarine he served aboard, the USS Permit, SSN 594.

Outside the museum they had the sail of the very first ballistic submarine, USS George Washington, SSBN 598.  Eventually, there were 41 of this class submarine built as a deterrent for the Cold War.

After the skipper got his submarine fix satisfied, it was time to head over to Mystic Pizza and try their ‘Little Slice of Heaven.’  The crew had a Hawaiian Pizza that was surprisingly good.  While waiting on the pizza, the customers can watch the movie Mystic Pizza on various TV sets scattered around the tables.  The menu has a bit of Mystic Pizza history, ands ends with the line, ‘The pizza that made the movie famous.’

After pizza, it was a short stroll around town and a long drive back to Boston.

Nothing really exciting to talk about today other than finding a bakery to try an original Boston Cream Pie.  Let’s just say it was anti-climatic.

Today the crew tried to go to the University of Massachusetts to visit the JFK Library.  Unfortunately after several attempts to find a place to dock the boat, the crew had to abandon their efforts.

They did get tied up on the pier beside the Library, but the sign says that the pier is for drop off and pick up only with a 10 minute max time limit.  The crew stretched the 10 minutes to 30 so they could have lunch before setting off for Gloucester. 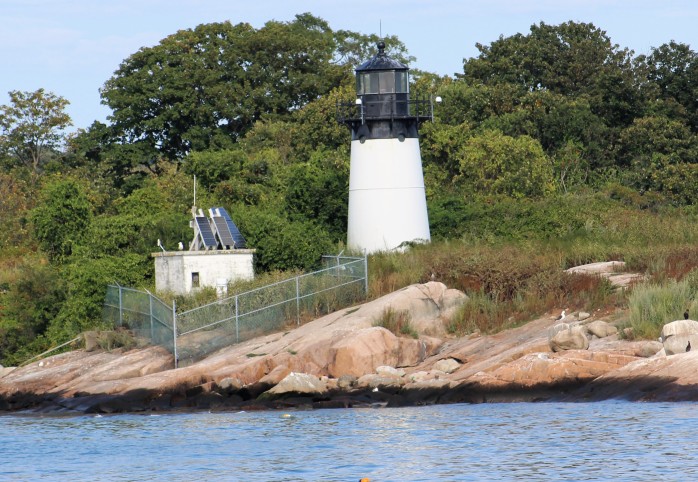 The view from the #3 mooring ball: 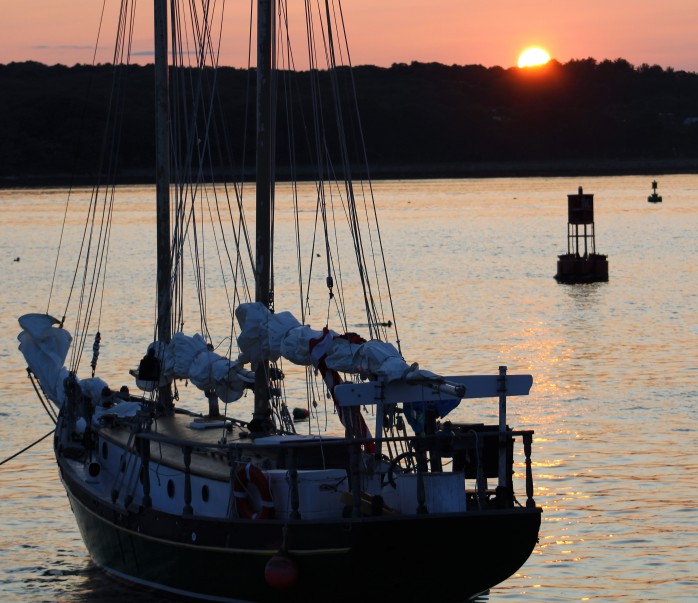 The big excitement for the day was watching marine mammals.  The skipper spotted a whale about a hundred yards off the port side of the boat.  The whale surfaced several times then broached and went under to not be seen again.

A little while later the skipper spotted some splashing activity in the water.  Upon investigating the crew found themselves surrounded by a large Pod of dolphins.  There were over a hundred of them swimming and feeding in the waters around the boat.

These dolphins looked very different than the ones further south.  These were multi-colored.  The top was very dark grey, almost black.  Then they had a lighter grey color along side, and then a white stripe by their tail fin.

This was another first for the crew.  The dolphins are Atlantic White-Sided Dolphin.

After the personal dolphin show the crew completed the run to Portsmouth, New Hampshire.  The crew could not find a dock in Portsmouth so they crossed the river over to Kittery, Maine and had a harrowing experience in the current.

Coming to the dock, the river runs through a mooring field full of boats.  The current was running about 4 knots when the crew arrived.  The current was pushing the boat around pretty good as they maneuvered thru the mooring field barely missing a couple of boats.  After passing the marina, the skipper rotated the boat around 180 degrees and backed the boat into the current and dock.  The people on the boat beside where the skipper was docking saw him coming, put down a couple of extra fenders, and then helped catch lines and get Still Waters II secured.

The crew will continue to head north exploring the coast of Maine.