The crew spent the week exploring the greater Cape Cod region.  They travelled from Sandwich, thru the Cap Cod Canal, and then on to Martha’s Vineyard on Monday.  Wednesday, they moved over to Nantucket.  Because of Hurricane Jose, the crew headed back to the mainland with a stop at Falmouth on Friday.

This week’s video is on hold as the crew continues to travel to get out of harms way of Hurricane Jose.

The crew got an earlier start than normal so they could ride the current thru the Cape Cod Canal.  This strategy allowed the crew to navigate the seven-mile canal in less than 45 minutes.  With the early start, the crew saw many fishermen along the canal banks.

There is no road along the canal; however, there is a bike trail.  The fishermen have rigged some interesting accessories to their bicycles so they can get to their favorite fishing spots along the canal path. 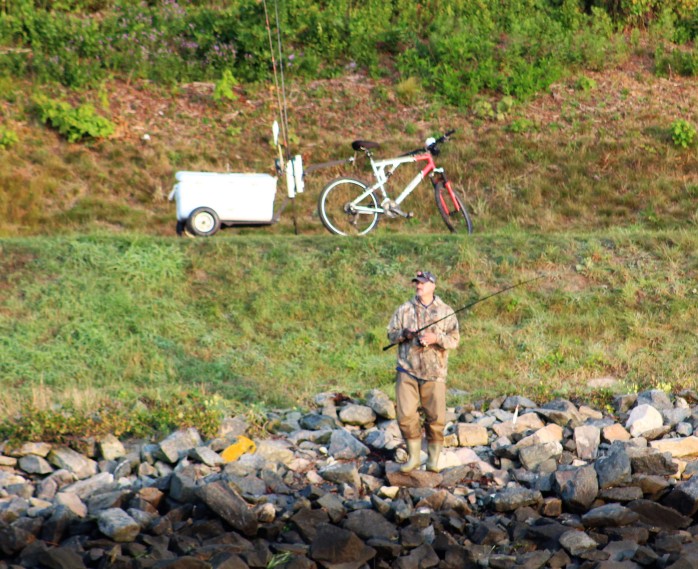 After crossing thru Cape Cod at the Woods Hole Passage, the crew entered the Vineyard Sound and headed toward Edgartown on the far east side of Martha’s Vineyard Island.

After taking a mooring ball for two days, the skipper dropped the dinghy in the water and the crew headed to shore to explore.

The homes have shingles for siding.  The shingles are cut from Maine white pine trees.  The wood shingles can last up to 100 years without being replaced.  The shingle has a light off white color when first placed on the home.  After the shingle ages, it turns this grayish brown color.

The crew also came across some interesting yard art for sale.  This guy was relaxing at an art gallery on the water front.

This whale tale was at another art gallery along the water front.

The crew found the Visitor center/bus stop and bought all day tickets to tour the island on Tuesday.  After sampling the local ice cream, the crew headed back to the mother ship swinging on a mooring ball.

The crew took the dinghy back ashore and walked back to the bus stop to catch the 10:00 a.m. bus.  The first stop was Oak Bluffs.  This area is known for three things: the Martha’s Vineyard Tabernacle, the gingerbread cottages, and Flying Horses. 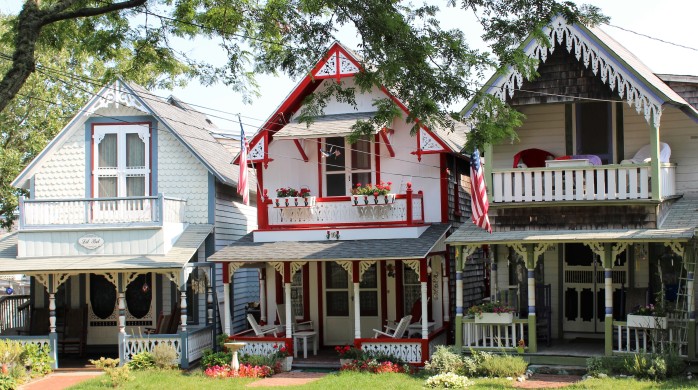 However, with all the statue controversy around the country, the skipper was intrigued by a Union Soldier that had a Confederate plaque honoring Confederate soldiers.  Seemed strange, so the skipper went in search of the back story of the statue.

The statue was erected by Charles Strahan who was from Maryland.  When Maryland did not succeed from the Union, Charles joined the 21st Virginia Regiment and was wounded in battle early in the war.  He also fought at Gettysburg later in the war.  He was near Lee at Appomattox when the surrender took place.

After the war, Charles made his home on Martha’s Vineyard and made his living by running the Martha’s Vineyard Herald.  The local members of the Grand Army were not pleased with their new resident.  Charles southern charm finally won the locals over.  In an effort to build bridges and heal the divide in the local community, Charles purchased the statue and had it dedicated in 1891.

At the dedication, Charles said “That this comes from one who once wore grey, I trust will add significance to the fact that we are once more a union of Americans, a union which endears with equal honor the citizen of Georgia with the citizen of Maine; that Massachusetts and South Carolina are again brothers; that there is no North nor South, no East nor West, but one undivided, indivisible Union.”

Charles had inscriptions on three sides of the statue honoring the Grand Army and the local chapter.  He left the back side of the monument bare and later wrote that he hoped that the locals would some day offer a tribute to their old foes on the inscribed side of the monument.

Finally, in 1925 a few surviving members of the local post of the Grand Army took the challenge.  Charles was also able to attend the ceremony at the age of eighty-six.  The fourth plaque reads, “The chasm is closed.  In memory of the restored Union this tablet is dedicated by Union veterans of the Civil War and patriotic citizens of Martha’s Vineyard in honor of the Confederate soldiers.”

The statue remains the only memorial north of the Mason-Dixon Line dedicated to soldiers on both sides of the conflict.  If the people who actually shot at each other can find a way to build a bridge and get over the war, makes you wonder why our population today (150 years later) cannot find a way to do the same.

The next stop on the bus was Tisbury where the crew walked around and enjoyed lunch.  So far the crew has concluded that the island has more bicycle rental shops and ice cream stores per capita than any place they have ever been. 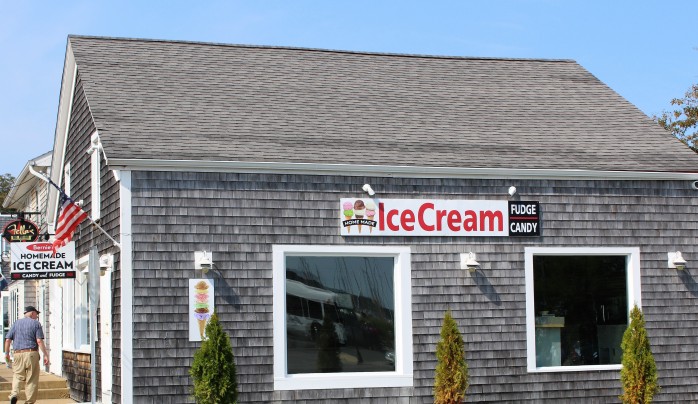 Next stop was at West Tisbury.  Not much here except a general store that claims to sale just about any and everything.  After going inside, the crew can confirm that indeed they sell just about everything.

The crew then strolled thru an outdoor art gallery while waiting on the next bus.  The artist has a large range of medium and subjects. 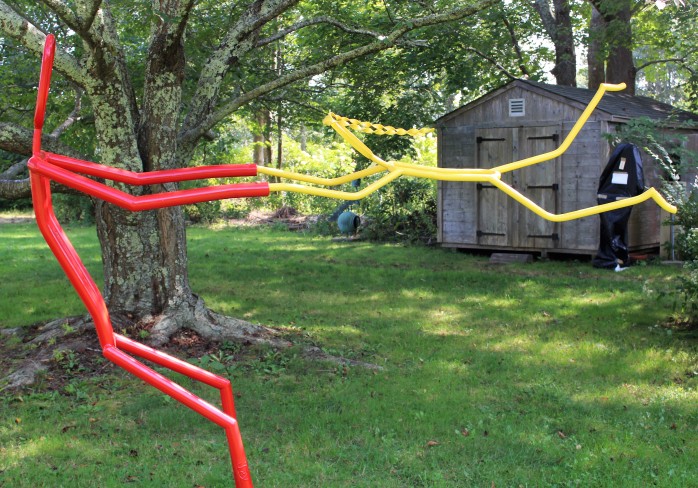 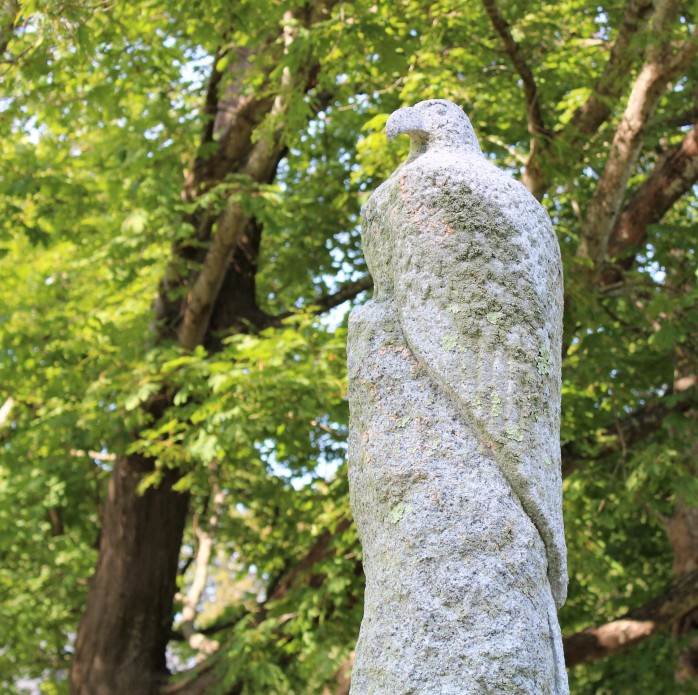 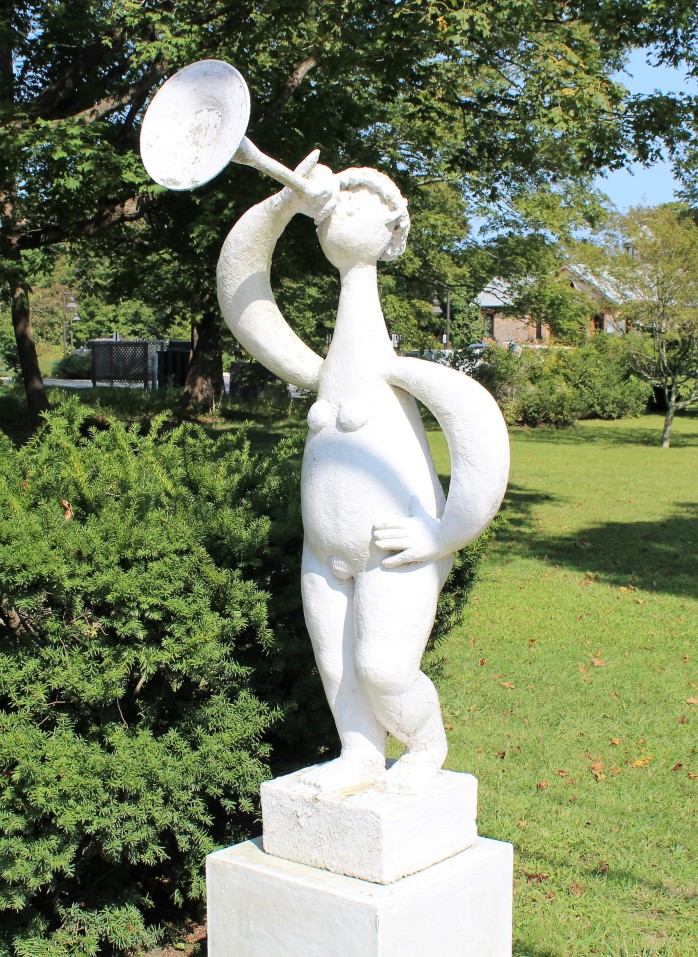 The next ‘discoverer’ was Verrazano, who sighted the Island in 1524 and called it Claudia, in honor of the mother of Francis II.

The next ‘discoverer’ was Bartholomew Gosnold of England in 1602.  He is credited for naming Cape Cod for the codfish he found in the water.  He named Martha’s Vineyard after his mother Martha and all the grape vines that were plentiful on the island.  He is also credited with naming the Elizabeth Islands after Queen Elizabeth.

At this stop the crew could see the famed clay cliffs of Martha’s Vineyard.  They also went up to the Aquinnah Lighthouse.  The views were spectacular.

From here the crew took the bus back to a transfer station and made one last leg back to Edgartown.  After finding an ice cream store, the crew made their way back to the mother ship to conclude another wonderful day.

Today the crew left Martha’s Vineyard and headed over to the Island of Nantucket to learn about the 1800 whale industry.  It was a good cruise over but an interesting indirect route.  The waters between the two islands is shallow and shoals often so the channel runs north into deeper water back towards Cape Cod, then turns and runs west for a while, then turns south to Nantucket.

Replica whaling ship at the entrance to the harbor to greet all boaters.

After arrival in port, the crew took a mooring ball and relaxed in the harbor watching all the other boaters come and go.

Today the crew dinghied ashore to explore Nantucket and the Whaling Museum. The museum did an excellent job show casing the hey day of the whaling industry in Nantucket.

One of the best exhibits was the Essex Gam.  A storyteller presented the tale of the ill-fated voyage of the whale ship Essex.  After rounding Cape Horn, she was sunk by a renegade whale which rammed the ship twice which led to the sinking of the Essex.  Three small whale boats were salvaged along with water and food before the Essex sank. The men then endured a challenging ordeal before they were rescued.  Eight of the twenty-two men managed to survive the ordeal.  The events of the Essex are what inspired Herman Melville’s Moby Dick.  But since the truth is stranger than fiction, I suggest you read In the Heart of the Sea: The Tragedy of the Whaleship Essex.

The museum also has a forty-six-foot sperm whale skeleton.

The whale washed ashore on the eastern end of Nantucket Island during the Christmas Holiday season in 1997.  The whale died January 1, 1998.  After scientist completed their studies, the whale was buried.  In the spring of ’98, the whale was dug up and suspended in the ocean to allow sea creatures to remove the remaining flesh from the bones.  The skeleton was then prepped and made available for the museum.

The skipper in the lower jawbone of a sperm whale.  The sperm whale has ivory teeth.

The skipper has been keeping one eye on hurricane Jose while the crew has been exploring the Cape Cod area.  Based on predicted storm conditions in the area, the crew has decided to head back to the mainland.

The weather decided to be strange today though.  After departing from the island, a heavy fog sat in and took visibility down to less than a half mile.  Since the crew is making way along the fast ferry channels, this is a bit uncomfortable. 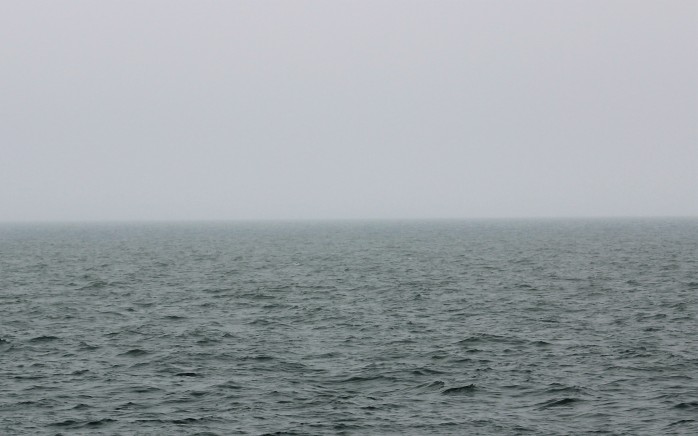 The crew was fortunate and did not see or hear of any ferries along the route.  At one point the skipper was looking for a green marker to verify they were on the right course.

The GPS showed them less than a half mile from the green marker, but he could not see the navigational aid.  Finally, he started hearing the bell ringing on the marker.  Then suddenly it sprang into view about a quarter mile off the bow.

Then as the crew approached within two miles of land the fog finally lifted, the sun came out, and it was a beautiful afternoon.

With hurricane Jose taking aim on New England, the crew has decided it is high time to get to safer ground.  This is why our crew has a fast boat.  They travelled 80 miles today back to Groton where they took a mooring ball for the evening.

Since the travel was in the fog with less than a quarter mile visibility, there are no pics.  The skipper did say he was a bit tired after straining all day looking out for other boats.  He said it was a strange feeling to cross a boat wake when you never saw the boat. 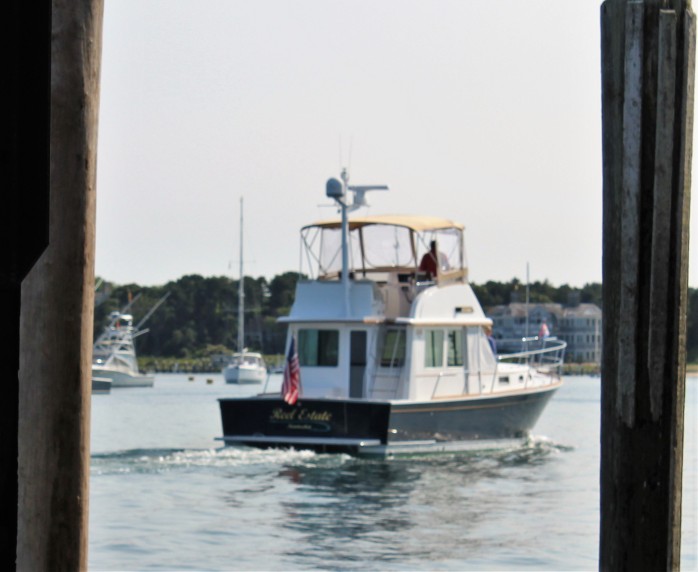 At this time, it looks like the best guess is that high winds and storm surges will hit the lower New England area sometime Tuesday ahead of Jose.  Based on these predictions, the crew has decided to keep moving and head towards the Hudson River.  It is two hundred twenty-five miles to the Hudson River.  The goal is to travel long and hard Saturday, Sunday, and Monday so that the boat is far enough up the Hudson River to be out of harms way.

← Wind, Waves, and Whales
Lost My Head in Sleepy Hollow →