When it was time to leave Poughkeepsie on Tuesday, Jose had disappeared, but Hurricane Maria had taken his place.  The winds were not favorable for turning south and running down to Cape May, NJ.  So the crew continued their northbound journey on the Hudson River with a new goal of reaching Burlington, Vermont before turning south.  They have dubbed this new goal the ‘Fall Leaf Tour.’

This week’s journey of discovery did answer the following questions

1. Where do the tidal waters end on the Hudson River?

2. Why is there no Lock number one on the Erie Canal?

3. Why did the Erie Canal get moved to the NY Transportation Division in 2017?

This week’s video shows Still Waters II in Champlain Locks C-1 and C-2, where she is lifted 14 feet and 18 feet respectively.  Enjoy!

The run to Kingston was uneventful except for the Man-Over-Board (MOB) drill.  This was only a drill.  The Admiral spotted something in the river that turned out to be a lifejacket.  The skipper used the lifejacket to practice their MOB skills.  I am happy to report that the lifejacket was saved without incident.  And it is a good lifejacket to boot.

When the crew reached the Rondout Lighthouse, they turned up the creek and docked at the Maritime Museum. 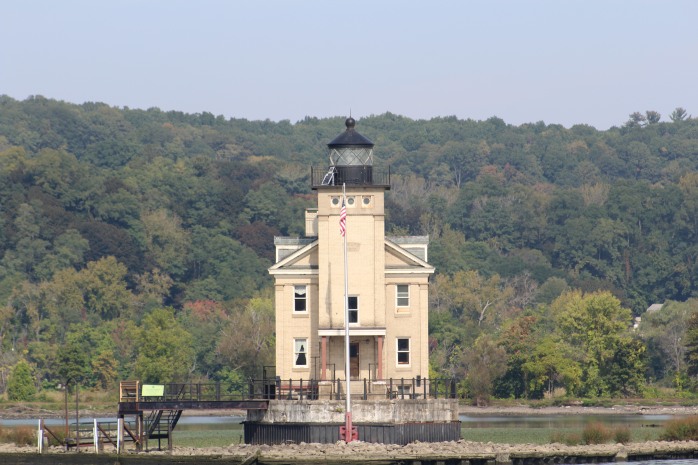 Since last visiting the Museum, a Wooden Boat School has been added.  The workers were busy building one boat that they plan to power with solar panels and an electric motor.  Another project was in process where the crew watched the workers bend a piece of plywood around a structure.

The “Fall Leaf Tour’ is off to a slow start because the temperatures have not cooled off yet.

The crew had planned to cruise about half-way to Waterford, 40 miles, and anchor out for the night.  When they arrived at the designated anchor spot at 1400, it was 90 degrees out with no breeze.  The crew decided to push on to Waterford in hopes of getting a spot on the town dock wall with electricity.

On the way, they passed two lighthouses and a Bald Eagle perched on a navigational aid.

After clearing the Federal Lock, it was only three miles until the crew reached the junction of the Erie and Champlain Canal Systems. 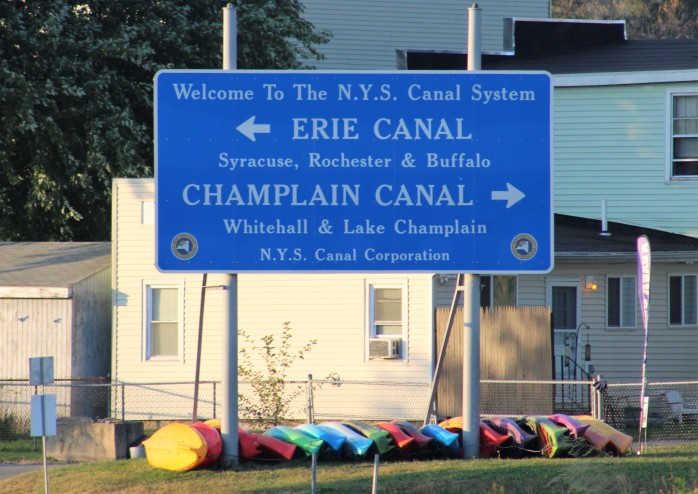 Though the crew plans to take the Champlain Canal to Vermont, the crew turned left to dock at the Waterford Welcome Center at the first lock on the Erie Canal, Lock E-2.

There is no lock E-1 on the Erie Canal, which begs the question, ‘What happened to Lock E-1?  Well, in the early 1900’s New York decided to upgrade the canal system.  Part of the plan was to build E-1 at the location where the Federal Lock now sits.

After the blue prints were completed and construction was started in 1903 on other portions of the Erie Canal, it was discovered that the location for E-1 was on land and water owned by the Federal Government.  Negotiations were entered to allow New York to build and operate a lock on the Federal land.

Ultimately, it was determined that the Federal Government would build and operate the new lock.  By then it was to late to change all the blueprints and names for the other Erie Canal Locks.  The Canal System just scrubbed Lock E-1 and continued with their original plans. And that my friends is why the first lock on the NY Erie Canal was numbered E-2.

While in the first lock on the Champlain Canal, C-1, the skipper struck up a conversation with the Lockmaster.  The skipper was inquiring why the locks were closing early this year.

The lockmaster commented that the Canal System had been moved to the NY Transportation Department in 2017.  As part of the change, the Canal System could now charge more money for the commercial usage of the canal.  As part of the compromise for more money, the Canal System agreed to open the recreational system later and close earlier. Yes, follow the money trail, it usually leads to the answer.  In 2017, the recreational season opened a month later than usual and is closing three weeks earlier than the past so commercial traffic can have sole use of the canals.

The main goal today was to move ten miles to Mechanicville and contact the Lockmaster at Lock C-3.  There is a bridge just past Lock C-3 that is only 15.5 feet of vertical clearance.  The skipper called the Lockmaster and learned that the current pool level created a vertical clearance of 17 feet 2 inches.  Unfortunately, this is not good enough.  Still Waters II requires 17 feet 6 inches of clearance.

The skipper got busy and took the anchor light and TV antennae down.  This resulted in lowering the vertical clearance to 15 feet 6 inches which should be good enough to squeeze under the bridge.

After clearing Lock three, it was less than a mile to the lowest bridge on the Champlain Canal.  Before leaving the lock, the skipper did ask the Lockmaster about the bridge clearance one more time.  The Lockmaster assured the skipper he had 17 feet of clearance.

When they approached the bridge, the water level board read 17 feet, so the skipper slowly approached and then squeezed under the bridge.  As you can see below, there was plenty of room to spare.

There was some great scenery on the route to Lock C-5.  After exiting the lock, the crew approached a confusing bridge.  The Navionics, Blue Chart Garmin, and NY Canal Handbook charts all listed the bridge clearance at different heights.  The visual clearance did not look good. 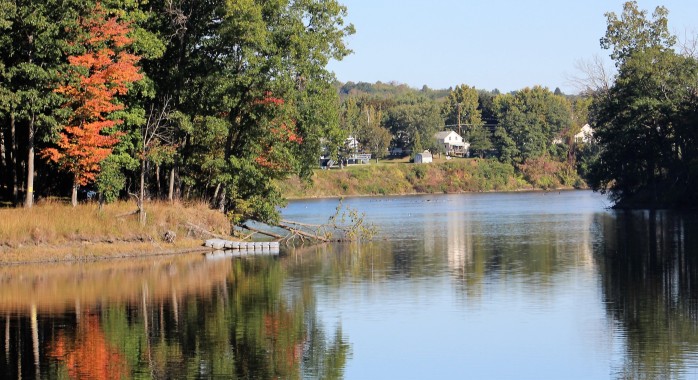 Once again, the skipper eased the boat up to the bridge while the Admiral climbed out on the roof of the sundeck to ensure they had enough clearance to make it under the bridge.  Just before reaching the bridge some local yelled out, ‘You have plenty of room.’  Well turns out he was right. 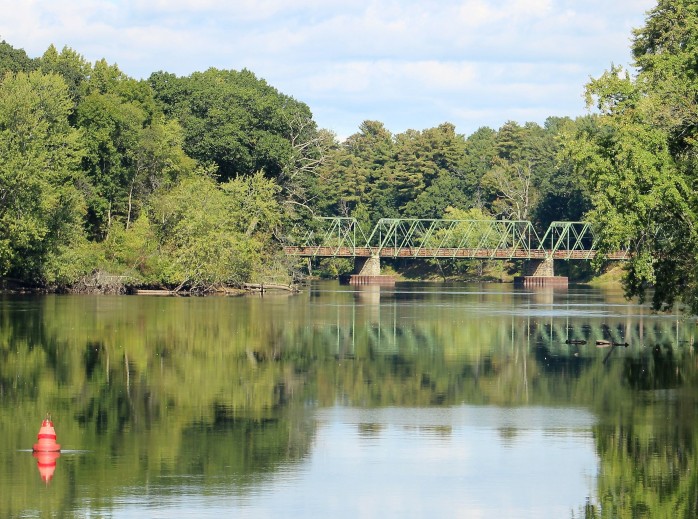 The crew continued on to Ft Edwards Yacht Basin without any more nail bitter bridges.

After lunch the crew set out for Whitehall.  As the crew pulled into Lock C-7 the rain started back up.  Luckily it was only a light mist.  By the time they cleared the lock, the sun broke out for a while.

Lock C-8 was cleared in sunshine.  Just after exiting the lock, the skipper got a radio call from a tug Captain.  He requested the skipper to hold his position while the tug made it through a narrow shallow portion of the canal.  The tow Captain said he gets stuck in the area about half the time.  After about ten minutes, the Captain called back and said he was dragging bottom but thought he would make it through the shallow area.  He told the skipper to come on by and throw a little bit of wake.

After the tow, the skipper spotted a Bald Eagle perched in the top of a dead tree.

The crew passed many farms along the canal today along with many boaters headed south. 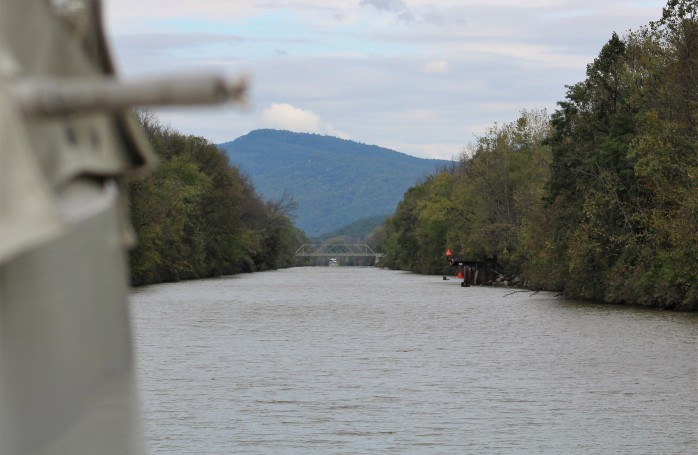 When the crew arrived at the Whitehall town dock there were already three boats tied along the wall.  There was barely any room to shoe horn a fourth boat in.  The owner of a sailboat hopped off his boat and ‘walked’ it closer to another sailboat on the wall.  This provided about 30 foot of wall space for Still Waters II to land on the wall with 15 feet of boat hanging out in the open.

Since the temps are scheduled to drop in the low 30’s tonight, the Admiral was happy to be getting electricity for the heaters for the weekend.

The crew will continue on to Burlington, Vermont where they will turnaround and head back south.  They will need to be out of the Champlain Canal before the closure on October 11th.