The crew left the safe haven of the Georgetown Yacht Basin and headed south down the Eastern Shore of the Chesapeake Bay.

The first stop was at Kent Narrows on Tuesday.

The cruise south was long on Wednesday as the crew skipped their first anchor choice and continued down Bay due to calm seas.

On Thursday the crew made way to Onancock for some good hole foods.

Friday, the crew decided to make 80 miles to Norfolk while the Bay was still calm.

This week’s video shows Still Waters II cruising down the Eastern Shore of the Chesapeake Bay.  The clip starts with some smooth sailing in calm waters.  The clip then transitions to some choppy water, and ends when a cargo ship and car carrier converge near the south end of the Bay.  Enjoy!

The crew took advantage of the calm conditions to make it south to the Kent Narrows.  They arrived about 1600.  They were the only boat at the marina.  After they landed, they went to the Jetty Restaurant to enjoy another dock and dine experience.  While dining, the Admiral asked if they could stay on the dock for the night.  The Manager agreed to allow them to remain on the dock for the night.

The run today started out well.  In fact, about noon, things were going so good the crew decided to skip the anchor spot in the Choptank River and continue south to the Honga River where they had planned to anchor tomorrow.  The winds were out of the east at about 8 mph which resulted in fairly flat seas.  This looked to be a good decision until 1330.  Then suddenly, as is prone to happen on the Bay, the wind changed direction out of the south and the winds picked up to 12 mph.  This made the last three hours rocky as the crew cruised in 2-3 foot waves with occasional 4-5 footers.  A little boat spray from the pounding waves:

After the crew dropped anchor in the Honga River, the winds died down and the crew had a calm night on the hook.  Watching the sun set while at anchor.

The crew awoke to very calm conditions this morning.  The winds were light and stayed less than 5 mph out of the south all day.  with these flat calm sea conditions, the crew once again decided to skip a scheduled stop and push further south.  There are strong winds predicted for the weekend and the crew has set a goal to get off the Bay while it is still calm.

At some point on the way south, they counted 17 fishing boats working the same general area.  They watched intently as every once in a while a boat would pull up a basket and dump the contents.  However, they were not ever close enough to tell what the fisherman were keeping. 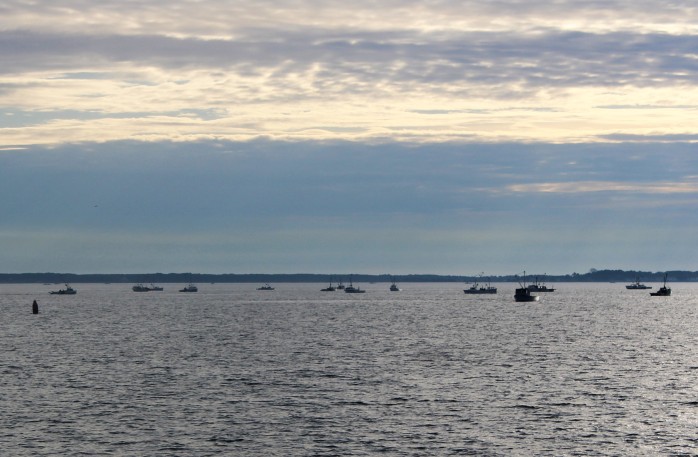 The skipper guessed that they must have been working an oyster bed.  The next day, the skipper’s guess was confirmed when an oysterman came to the dock with his ‘catch.’ 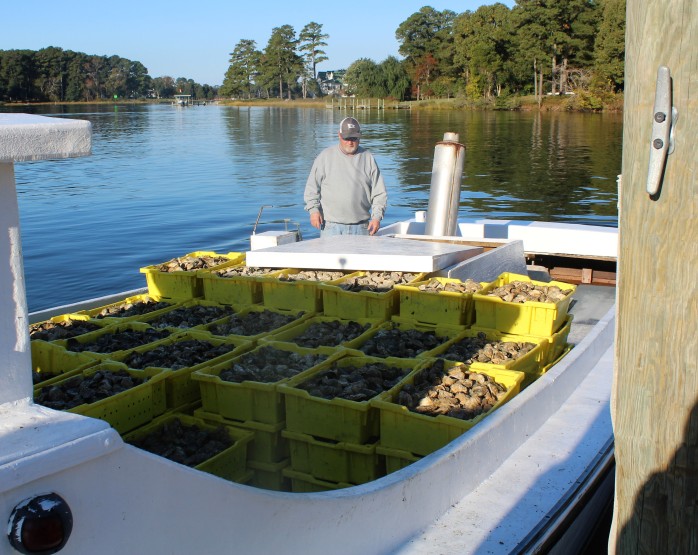 As the crew passed Tangier Island, the skipper decided to run a controlled experiment on the claims that the water level of the Bay is rising significantly.  You may recall that Al Gore often makes this claim as he peddles his brand of global warming.  His claim is that warming is causing the water level to rise and will eventually overtake the Island.

So the skipper decided to apply the scientific method to Al Gore’s claim:

Step 1: Ask a question. – Can we measure a difference in water level of the Bay to prove Al Gore right?

Step 2: State a hypothesis. – If water level is rising,  then we should be able to measure higher water levels from past Bay water level measurements.

Step 3: Test hypothesis. – Water levels were measured (sounded) back in the 1800’s.  Todays charts are based off of these 1800 measurements.  The charts used for the measurements were the NOAA charts, latest survey data updated in 1987.  These charts show Mean Low Water Level.  While passing by Tangier Island, the skipper will take three soundings of specific areas where he has agreement in the charts as to past water levels.  The soundings will need to be compensated for the tidal change at the time of the soundings.

First observation is that the water level was either the same or lower from the 1850’s charts to the more accurate measuring systems of 1987.

By adding the expected tide change to the 1987 chart data we arrived at an expected depth value.  Since the chart depths are ‘Mean’ water levels, we would expect some small variations in actual measurements.

The water was calm, as can be seen in the above photo,  so waves did not effect the measurements.

Second observation is that all three measured values were lower than expected value.  These differences were less than six inches and can be accounted for by the ‘Mean’ explained above.

OK, back to cruising ……….The main reason for pulling into Onancock was to try the healthy hole foods (donuts) and sticky buns from the Corner Bakery.  Some friends have told the crew that the sticky buns are the best in the world.

The donuts were very good, but they were sold out of sticky buns by the time the crew arrived.  In fact, the Admiral says the donuts might be the best donuts ever.  This was probably a good sign.   Another good sign was when they found this guy working the counter.  How can you go wrong when this guy is your counter help?

The skipper will get up and go get some sticky buns in the morning before they shove off the dock. 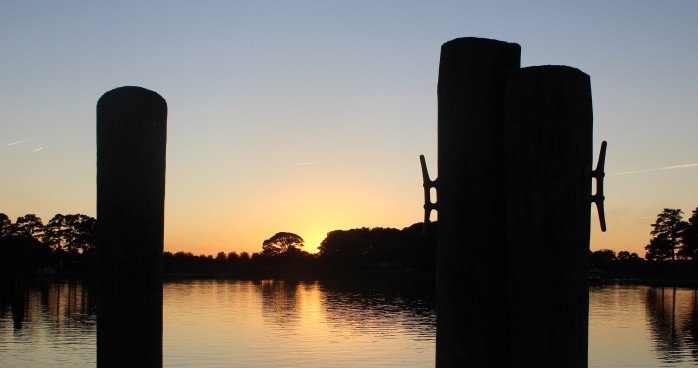 The Corner Bakery opened at 0730 and the skipper arrived about 0800.  He got a dozen donuts, but would have to wait until 0900 to get the coveted sticky buns.  While he was waiting, the Bakery began to fill with 5-6 older men sitting around a table drinking coffee.  When the first guy entered the Bakery, the man gave the skipper a strange look.  When a second guy entered and gave the skipper ‘the eye’, he finally figured out he must be sitting at the local ole guy fettle fart club table.

The guys were entertaining to listen to.  One of them was a 91 year old WWII Navy Veteran.  Once the group learned that the skipper was also a Navy Veteran, they forgave him for sitting at their table.

The WWII Veteran told an interesting story about how his ship was sunk by a couple of Kamikaze pilots near the end of the war as the Navy was closing in on Japan.  The survivors of the sunk ship were all given 30 days ‘Survivor Leave’ and sent back to the States.  He was actually still home on Leave when Japan surrendered.  The Navy processed him out of the service while he was on Leave, and he never had to go back.

After the sticky buns were procured, the skipper said good by to the locals and commented that he would be back in the spring.  The Romeo’s (retired old men eating out) said they would be there waiting to talk again upon his return.

I bet they are there everyday, so yes, they will be there in the spring  also.

The skipper delivered the goods to the boat and the crew shoved off for Norfolk. And yes, the sticky buns were as good as advertised.

The crew did not see any other cruisers until they got close to Norfolk.  As they left the Chesapeake Bay and entered the Elizabeth River, they had several boats following them.

When they neared the Waterside Marina, they passed by mile zero of the Atlantic Intercostal Waterway (AICW) marked by this red buoy. 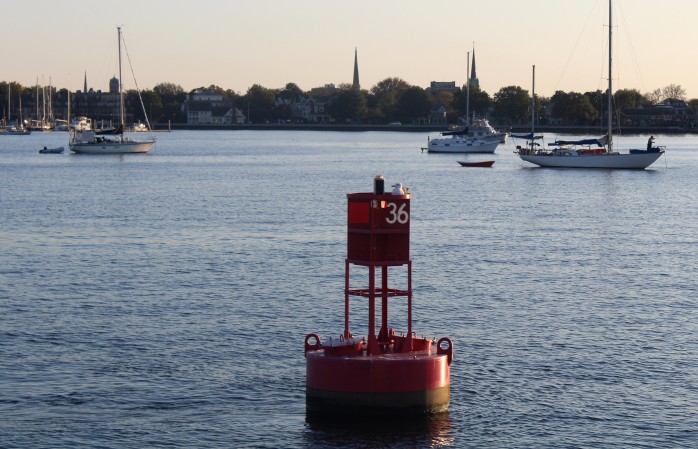 The crew then passed by this building welcoming them back to Norfolk.

The marina and waterfront have been under renovation since the crew last stopped here.  The new marina look.

The crew will continue south on Monday and hope to make Beaufort, North Carolina by next weekend.  They do have two large bodies of water to cross and will wait for the proper weather conditions before putting in those areas.  So we will have to wait and see how far they actually go.

← Knot for the Faint of Heart
Waiting and Wind →