Antebellum home in Belhaven, dressed up for 4th of July and posting now for Veterans Day. 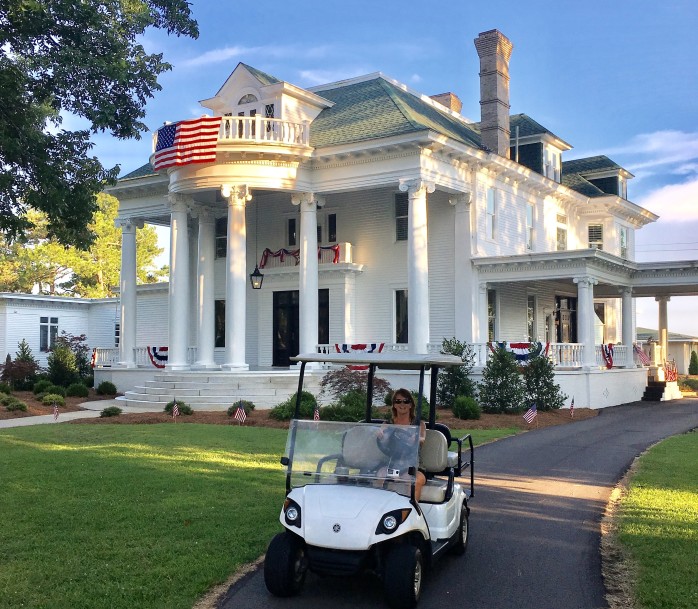 This would turn out to be one of the strangest weeks on the water yet. 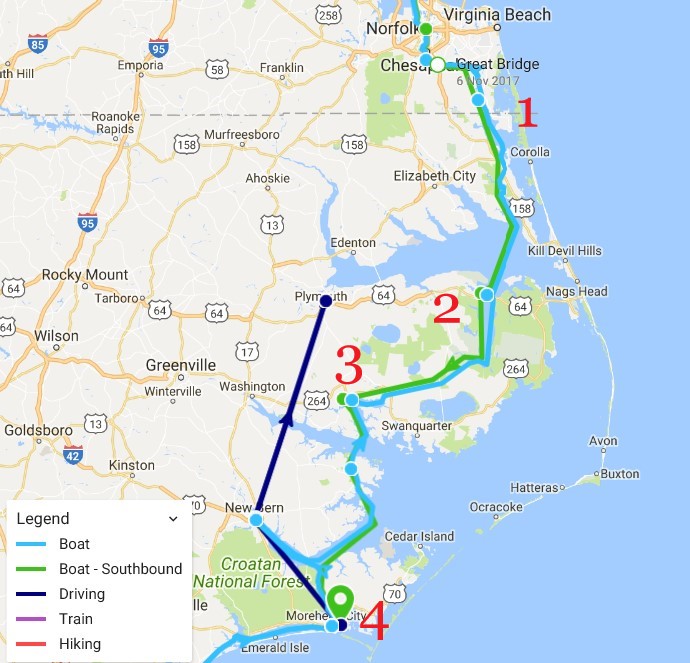 This week’s video shows Still Waters II headed down the Alligator River with some Gulls feeding in the boat wake.  Enjoy!

To see past videos, click on the link to the Still Waters II Vimeo site.

The day started with the Admiral piloting the boat out of the Waterside Marina and back onto the AICW.  The skipper then took over the helm and guided Still Waters II through the many Norfolk boat yards and container ship transfer points at idle speed.

When they finally arrived at the Gilmerton Bridge, they noticed three other boats hovering in the area.  As the skipper moved forward, he noticed the normally open #7 RR Bridge was closed.  Turned out the RR Bridge had closed to allow a train to pass over, but was now stuck in the down position and halting all boat traffic. 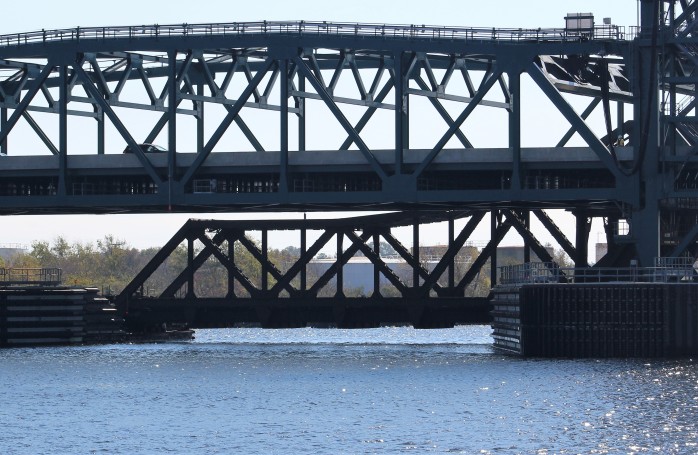 At 1210, the maintenance workers left and hopes were high that the RR Bridge would open.  The skipper called the RR Bridge Tender and learned that the crew observed had only come to pick up some equipment.  The folks that were dispatched to fix the RR Bridge had yet to arrive.  There were now 15 boats hovering in the channel, so the skipper decided to move out of the way and drop the anchor and wait.

The plan was to go a few miles further down river and pull into the Top Rack Marina to take on fuel and eat lunch.  When the crew arrived at the Fuel Island there was no room to dock.  Looks like our crew was not the only ones wishing to take advantage of the low fuel prices at Top Rack.

The crew arrived at 1255, had to hover out in the channel for about 30 minutes while others fueled.  After Leap of Faith left the Fuel Dock the skipper backed in and fueled up.  When they finished lunch, they noticed some boaters that they had met on the inland rivers last fall.  After talking with the crew of Let It Ride, our crew finally got back underway at 1425.

At 1450, they arrived at the Great Bridge Lock for the scheduled 1500 opening. 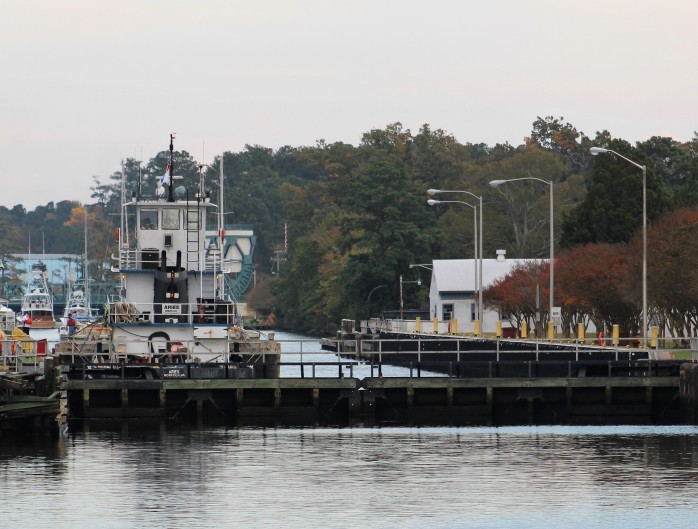 However, the Lock master did not open the gates until 1520, so once again the crew hovered in the channel.  Once the gates did open, then they had to wait for another boat to arrive.  They finally cleared the lock at 1548, almost an hour after arrival. 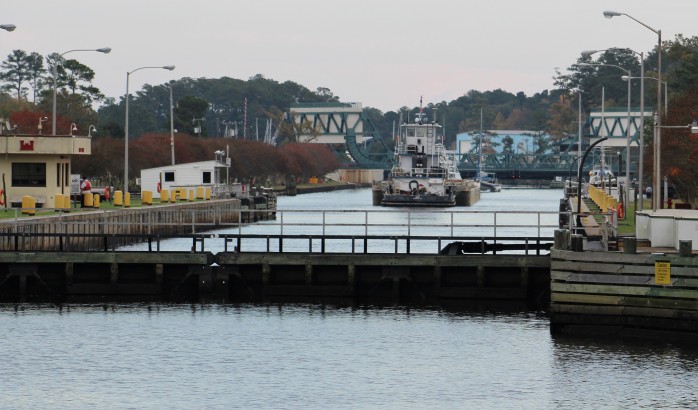 Since it was getting dark here at 1700, the crew was glad to see space along the Great Bridge Bridge wall that they could tie up to and bring this day to a close.

While docking, they did notice the sailboat in front of them had a hailing port of Kamah, Texas.  The crew is Wayne and Linda C.  They have been full time cruisers since 2004.

The skipper also noticed another Texas favorite nearby, a Dairy Queen was less than a half mile down the road.  There were Blizzards in the crews future.

The winds were predicted to be less than 10 mph all day, but were forecasted to build over 20 mph overnight.  Armed with that information, the crew decided to make a long day of it and try to make the Alligator River Marina on the south side of the Albemarle Sound.

This is Isla sliding under a 65 foot bridge with a 64 foot mast. 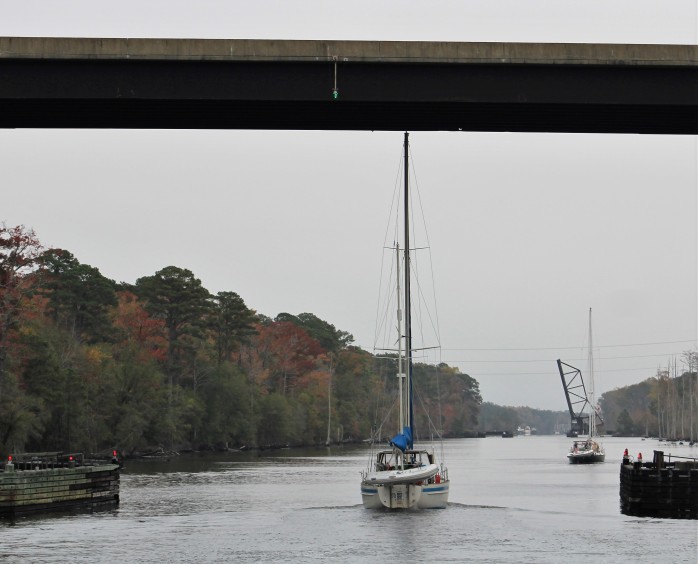 The crew made the 0900 hourly opening of the Great Bridge Bridge, then negotiated two more bridge openings.  They managed to clear all three bridges by 1030, but had only travelled 8 miles.  With 64 miles to the Marina, it became apparent that the crew would probably be docking in the dark.

The crew of ISLA, Wayne and Linda. 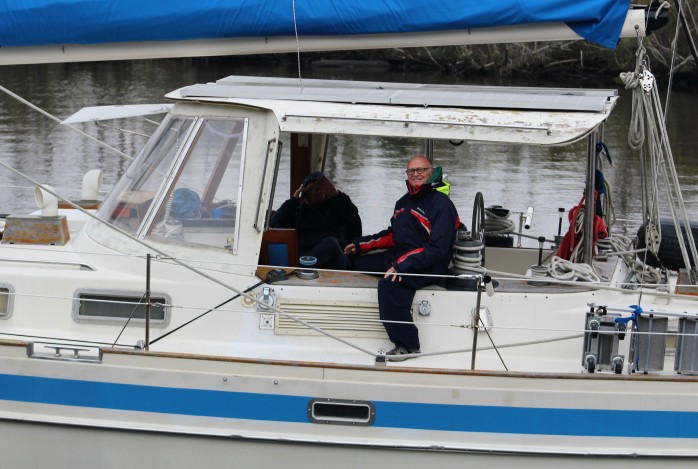 Sure enough the sun set at 1702, the crew arrived at the Marina at 1730 just as dark was setting in for the evening.  The  crew did find Let it Ride and Dragonfly on the docks.  The three crews had an enjoyable dinner aboard Let It Ride.

As predicted the winds picked up and howled Tuesday night, all day Wednesday, and are still going strong Thursday morning.  By 0900, the winds had dropped to 15 mph out of the south, so the crew decided to make a run for it to Belhaven.  The hardest part of the day would be getting off the dock.

Still Waters II was facing east, with the wind directly out of the north.  The wind had her pinned to the dock fairly securely.  With the aid of two folks on the dock, the skipper’s first two attempts to free her were unsuccessful.  On the third attempt, he finally got the bow pointed out and gunned the engines to get away from the pier.  Unfortunately,  the last two inches of rub rail kissed a pilling.  The smack caused about a foot of the rubber rub rail to break.  The good news was that the rub rail did its job and protected the boat from any fiberglass damage.

After the excitement of shoving off the dock, the next mile and a half was the roughest part of the day.  The Marina is on the north side of a highway.  The crew had to travel with three foot beam seas out to the bridge to go under the highway.  Once the boat turned south the crew had a more enjoyable ride. 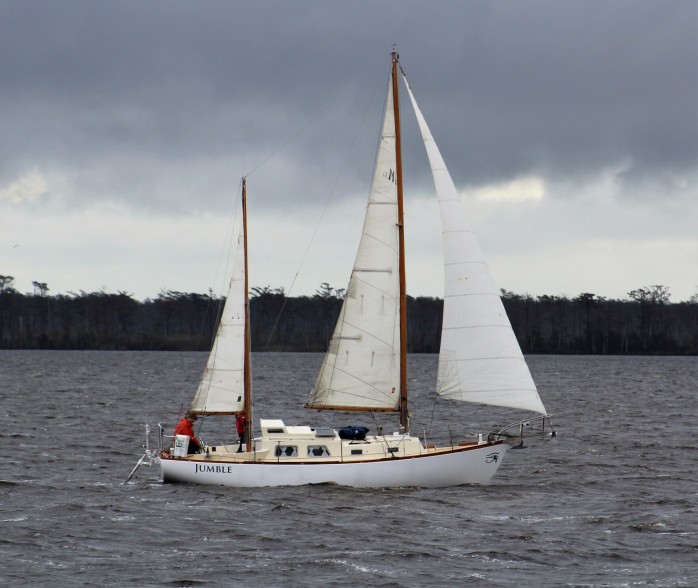 Birds feeding in the wake. 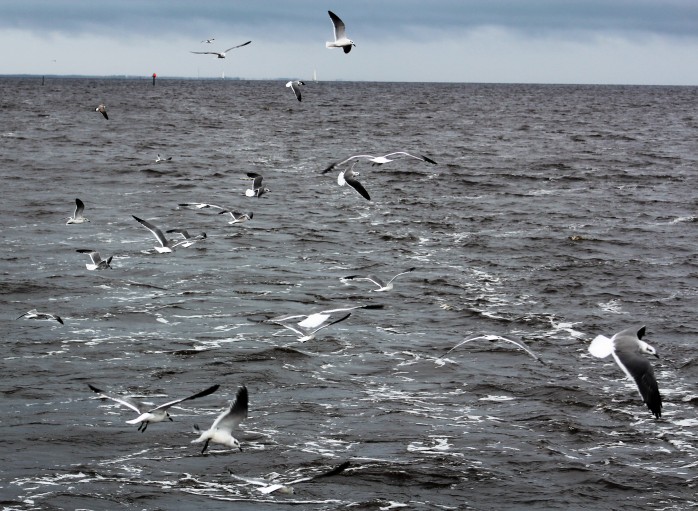 Luckily, by the time the crew arrived at the River Forest Marina the rain had stopped.  Leap of Faith, Let It Ride, and Dragonfly also arrived later in the day.  A mini Looper Rendezvous on the docks as the crews all swapped their latest sea stories.

Dock hands waiting for the next arrival at River Forest Marina. 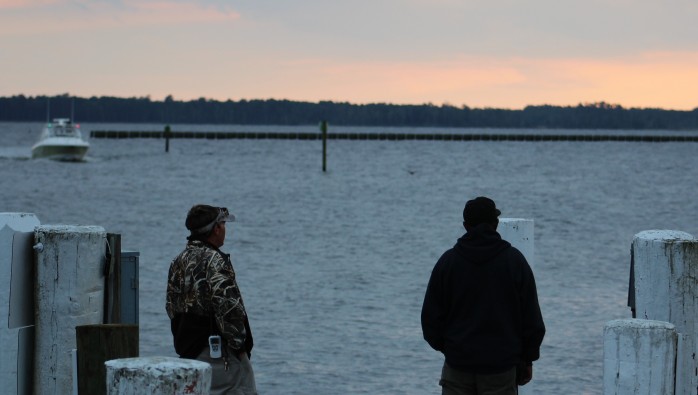 The theme of the week, waiting and wind, would continue.  The winds were in the mid 20’s with gusts to the mid 30’s much of Thursday night through Saturday morning.  The winds dropped down into the mid-teens on Saturday morning with forecast to continue to drop during the day.

This next section of water has some wide open and exposed areas so before leaving the dock, the skipper found three bailout locations along the route just in case things did not go as planned.

The crew shoved off the dock in 17 mph winds.  This time the wind blew them away from the dock and it was much easier to get underway.  Amazingly, the waves were only 1-2 footers and following which made for an easy ride on the Pungo River.

Seas as the crew crossed the Pamlico River. 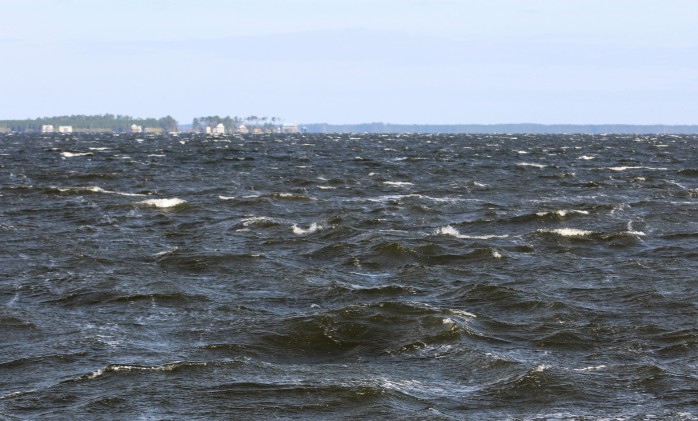 When they arrived to cross the Pamlico River, the wind had picked up to 19 mph and whipped up the waves to 3-5 feet.  The angle of the waves were off the back starboard quarter which caused the boat to fishtail back and forth.  The crew got across this nastiness in 30 minutes and entered a narrow canal where things were much nicer.

Another sailboat enjoying the wind. 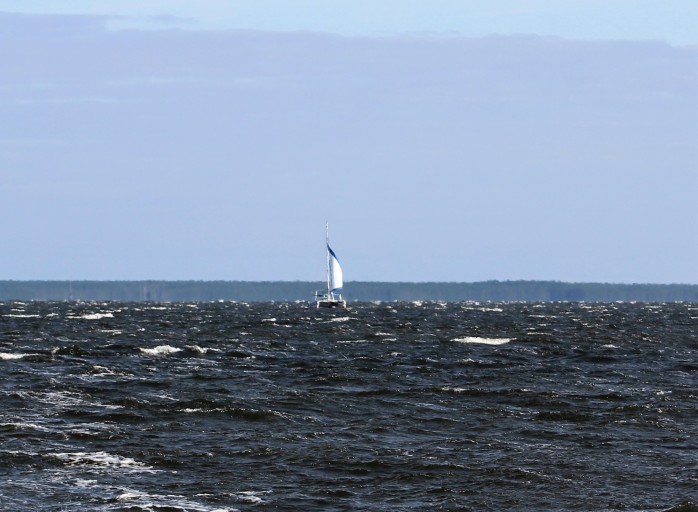 The crew of Leap of Faith were about an hour ahead of our crew and were texting back sea conditions in the Bay River and Neuse River.  Lets just say the weather forecasters were wrong again.  The winds continued to stay strong all day.  The crew passed their first bailout point and decided to press on to see for themselves the waves in the Bay River.

The waves in the Bay River turned out to be about 3 footers.  But with the direction of travel the ride was comfortable.  The skipper took an angle out of the channel over marked deep water that also helped to make for a calm ride.  They passed their second bailout location and continued south on the Neuse River

When they passed Oriental, the third bailout location, all seemed to be going smoothly.  With all the big water behind them, it would now only be another 15 miles in narrow creeks out of the wind.  Well of course, except for docking.

A small reprieve from the wind. 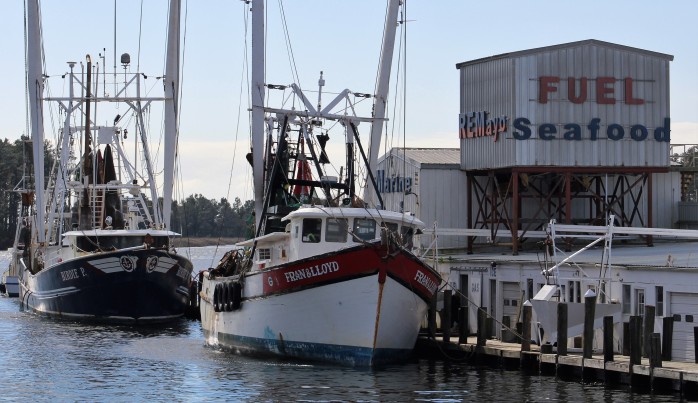 When they came out of the narrow creeks, they discovered that the winds had picked up again.  The wind was now blowing in the low 20’s.  To make matters worse, the wind would be blowing directly across the boat while trying to dock.  It took three tries before the skipper was finally able to get the right strategy to back the boat in the slip.  He started backing the boat towards the slip, two boat slips north of his designated slip.  The wind blew him south and as he arrived in front of his slip he was able to get between the dock and the boat just south of him.  Good thing that big 60 foot boat was blocking the wind after he got in the slip.

After getting all secure, the skipper went up to the office to check in.  To his surprise, the dock master gave him a large bag of fresh shrimp.  This has been a strange week, but at least it will end on a good note with a shrimp boil tonight. 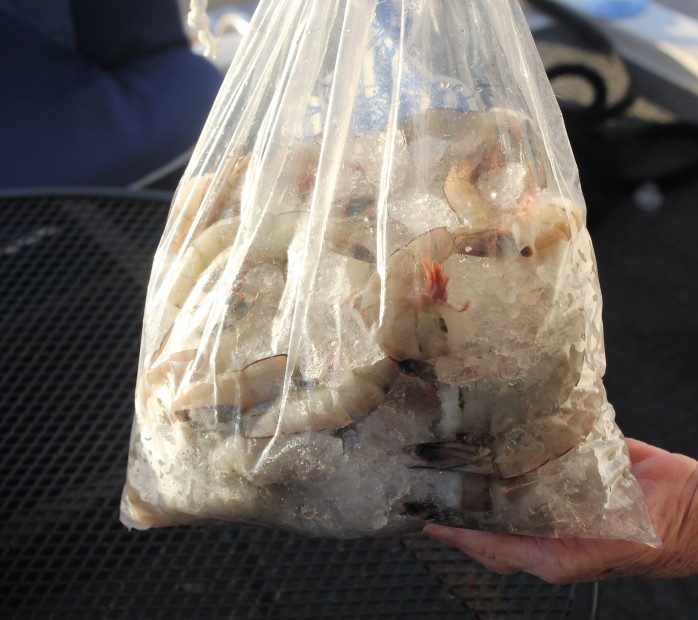 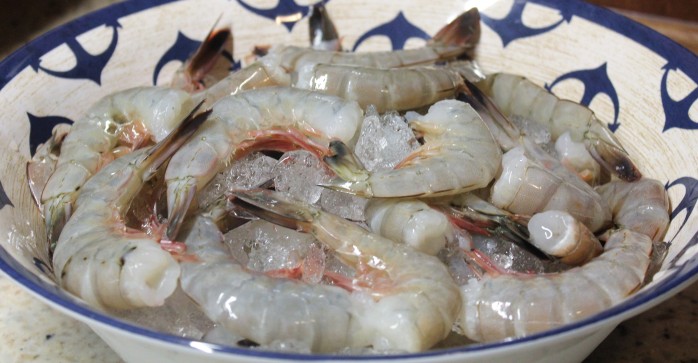 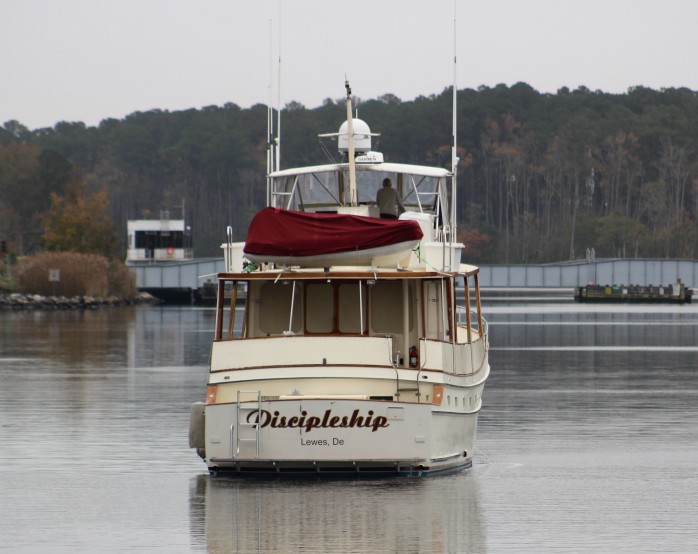 The forecast continues to show wind to be a challenge to safe navigation.  So depending on how the weather actually plays out will certainly have an impact on how far south the crew makes it this next week.  They hope to get somewhere between North Myrtle Beach and Charleston.