This short video shows the crew trying to help a sailboat who ran aground.  After pulling the bow around they were able to pull her into deeper wat

Another strange week unfolded for the crew.  They were stalled in their journey south by two different waterway closures due to bridge issues.  They also were delayed as they stopped and rendered aid to two sailboats that had run aground.  Needless to say, they did not make much progress during the week, only traveling four days:

This week’s video shows Still Waters II cruising south through North Carolina.  Two of the three clips are the skipper running his mouth, while the third clip is a short piece just cruising along.  Enjoy!

You just never know what you might see out on the water.  When the crew passed by Morehead City, they saw a ship loaded with wind turbine blades.  There must have been about 70 blades on the ship from Panama.  The skipper was wondering if they were coming or going?

The crew has also learned that boating plans are cast in Jello.  Today would reinforce the idea that you should never have a schedule on board, and that your plans should remain flexible.  The plan was to cruise to Swansboro, stop to have lunch, and then continue down the AICW to an anchorage at Camp Lejeune, in Mile Hammock Bay.

About an hour into the days cruise, the Cost Guard came over the radio and announced that the Onslow Beach Swing Bridge was reported to have a mechanical failure and could not open.  Since the Bridge clearance is only 12 feet, Still Waters II would not be going past Swansboro until the Bridge was repaired.

The crew made the short run to Swansboro and walked up to Yana’s for some peach fritters.  Unfortunately, the crew ran into more bad news.  Peach fritters are out of season and will not return till next spring.  The skipper had to settle for strawberry fritters instead.  This day is just not working out as planned. 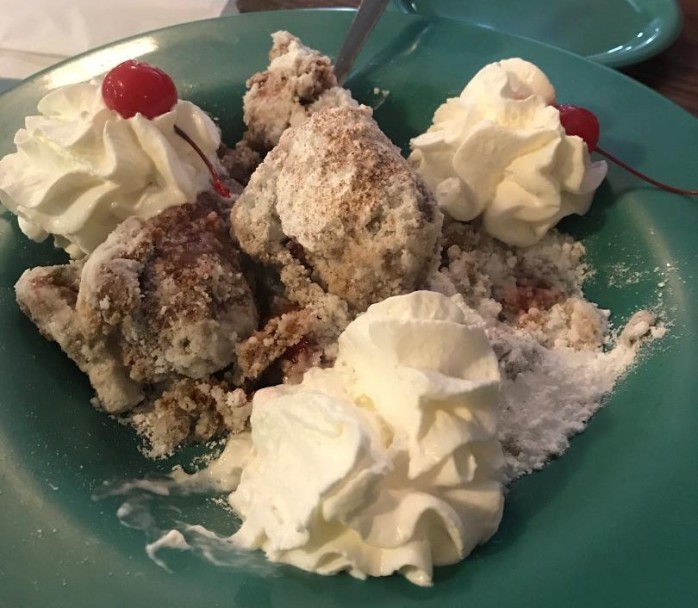 After lunch, the crew returned to the boat and later learned that the Swing Bridge had been repaired.  The maintenance crew had to replace a hydraulic cylinder

The skipper had plans today to make the 0830 opening of the Onslow Swing Bridge.  However, these plans turned into Jello about an hour into the run.  With the Bridge in sight and only 10 minutes to the Bridge, a sailboat hailed the skipper and asked him to slow down.  The sailboat was clearly in the marked channel, notice the green marker,  but had still gone aground.  The sailboat was from Canada, so the skipper, with some minor nudging from the Admiral,  decided to give them some American hospitality. 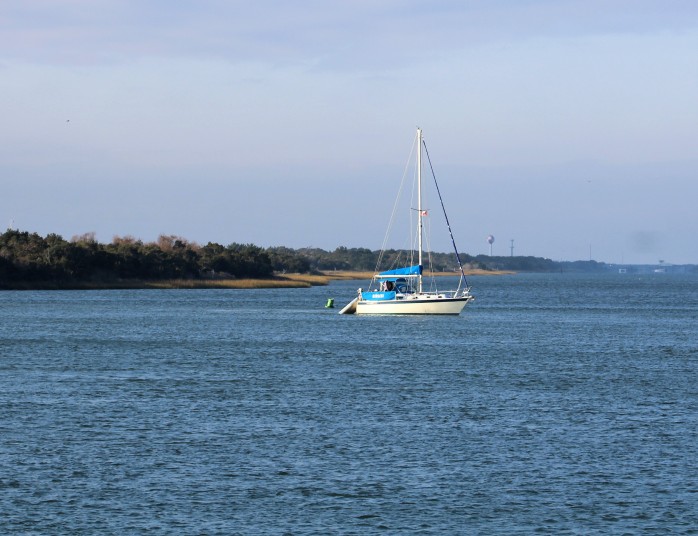 Active Captain has a warning that there is shoaling on the channel side of the green marker.  These folks obviously found the shoaling.  The skipper went by the sailboat to sound the depths and determine how close he could get without grounding himself.  The depth was about 4.5 feet at the bow of the sailboat.

The wind and current were causing problems for the skipper, so it took three passes for the crew to get a line over to the sailboat.  Once the line was secure , the skipper began dragging the sailboat to deeper water.  Notice the water spray coming off the line at the bow of the sailboat.

After a few minutes, the boat was free of the ground and a new problem emerged.  How to get the 50 foot line off the sailboat and back on Still Waters II without crashing into each other.  Luckily the captain of the sailboat was able to keep clear and all ended well. 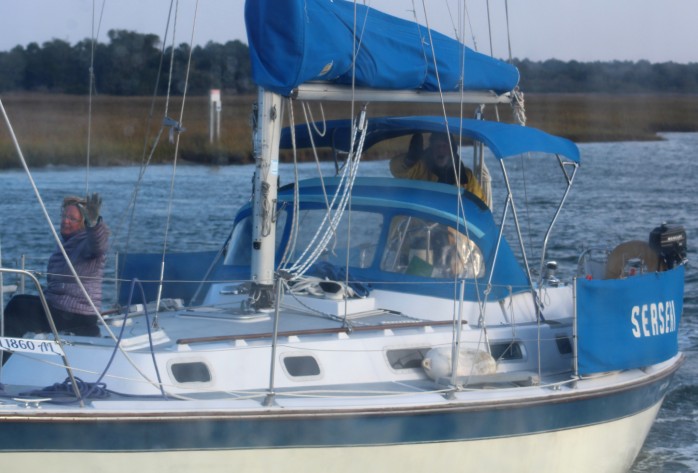 Well, except the crew missed the 0830 bridge opening.  The skipper guided the boat to the Bridge and waited for the 0900 opening.  After two days of trying, the crew finally got south of the Onslow Beach Swing Bridge.

The next obstacle to overcome was the Surf City Swing Bridge which only opens on the hour.  The skipper adjusted speed so that they could arrive in time for the noon opening.

At about 1130, the skipper was keeping an eye on a sailboat that was about a half mile in front, and was trying to determine if he should overtake them or slow down.  He was calculating time to the bridge if he slowed when he noticed the sailboat heeled over about 45 degrees and came to an abrupt halt.

Then the sailboat captain took a stern line from Still Waters II and tied it to the bow line from the sail boat.   The skipper then pulled the sailboat back into the channel and deeper water. 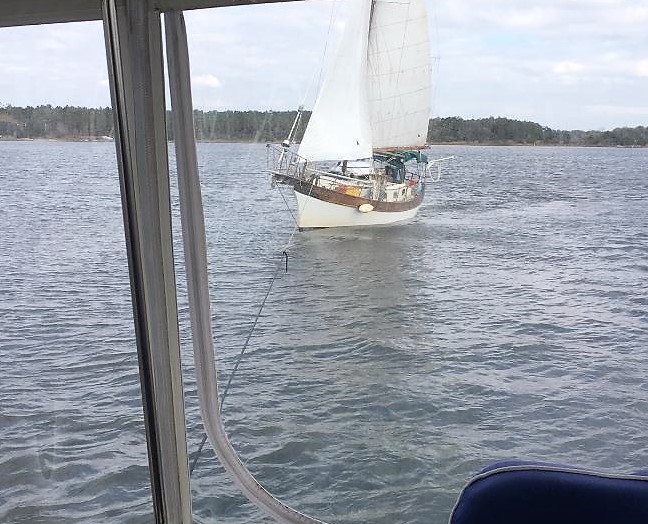 Once free, the sailboat captain untied the lines and both crews were off towards the Surf City Swing Bridge.

The skipper likes to arrive 15 minutes early to most events because 15 minutes early is actually on time.  On time is late.  And if you are late, you just might get left behind.  This life philosophy worked well today, because once the crew got the line back from the sailboat, the skipper put the throttle down and arrived just in time to pass through the noon opening of the Surf City Swing Bridge.

The skipper did spot a couple of deer feeding in the yard of a home owner along the waterway.

The crew had two more timed bridges to make before they would arrive at Carolina Beach.  Between the Bridges and the sailboat rescues, the crew managed to arrive at the marina just at sunset.

The Joyner Marina is the homeport of John and Ann Marie.  The two couples first met at a one day Looper Seminar before either had a boat.  Then met again at the 2015 and 2016 Spring Rendezvous held in Norfolk.  This year, John and Ann Marie were south bound while our crew was northbound and met in the Alligator River-Pungo River Canal. 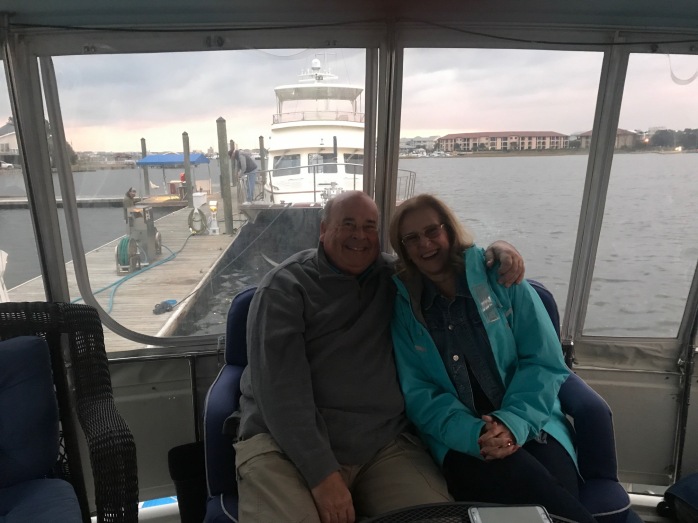 After a few sea stories on the sundeck of Still Waters II, the four set off for Flaming Amy’s Burrito Barn.  One of the truly fun and remarkable things about this Looper Lifestyle is the incredible people you meet and the unique experiences you get to have.

Tonight’s dinner would be one of those unique experiences because it is Churkeychanga Time of year, November 1-22.  And just what is a Churkeychanga you ask?  That would be a roasted turkey breast, garlic mashed red potatoes, and cornbread stuffing rolled into a flour tortilla and then deep fried ’till crispy.  Then they smother it with jalapeno cream gravy and serve it up with a side of cranberry salsa.

After a wonderful evening yesterday, the crew took a short 16 mile run down the Cape Fear River and pulled into the South Harbor Village Marina.  Today is the culmination of about a months work of effort to try and determine if the auto pilot works aboard Still Waters II.  Yes the skipper has manually steered the boat for just over 15,000 miles over the last few years.

He has determined that the auto pilot computer is still wired to the fluxgate compass, the rudder feedback mechanism, and the chart plotter.  The only thing needed to make the system work is an auto pilot control head.  The company who made the autopilot has been out of business for over ten years, so finding the control head has been a daunting task.

The skipper has chased a control head down at a local consignment store here in Southport.  After arrival, Rusty, the store owner came and picked the skipper up.  The control head turns out to be the right model number and looks to be in decent shape so the skipper purchased the part.  Rusty then returned the skipper back to the marina.

The skipper spent the rest of the day reading the User Manual and installation instructions.  After the head was wired into the computer, the skipper was able to adjust the boat settings in the pilot control head.  Once all settings were entered, the skipper performed dock side trials and the auto pilot passed all the tests.

The ‘new’ auto pilot control head mounted at the helm.

Tomorrow the skipper will perform sea trials and hopefully commission the auto pilot for use.

Oh, and did I mention that the skipper celebrated today’s success by eating a hamburger at the Dead End Salon.  It was just to good of a deal to pass up half price burger Wednesday.

To the surprise of our crew as they left the marina, they saw Avocet cruise by this morning.  The two crews last saw each other back in 2016 on the inland rivers. 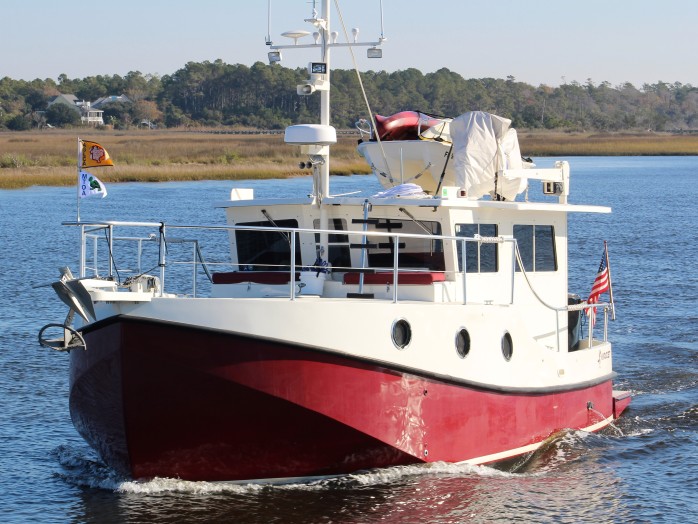 The skipper also spotted a buck that was hard at it chasing down a doe in the marsh.

The crew made him a bit nervous, so he pulled up and walked deeper into the salt marsh.  While he was thinking about his next move, the doe scampered off about two hundred yards ahead. 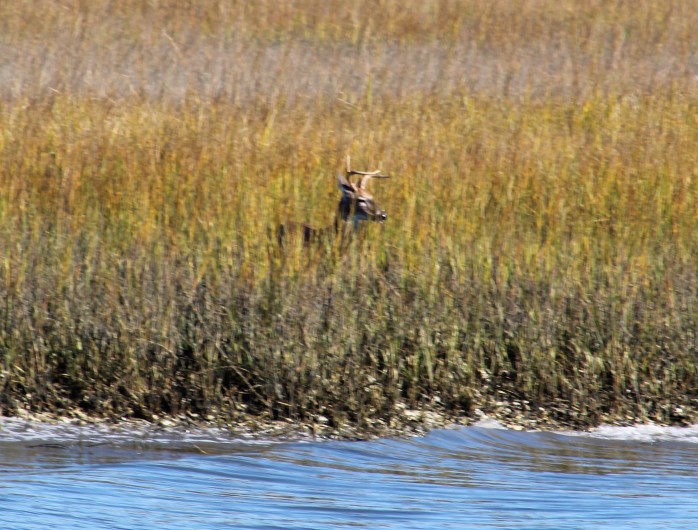 However, when the crew arrived in the ‘Rock Pile’ just north of Myrtle Beach at low tide, the skipper decided it best to manually steer until he gains more confidence in the system.

The skipper likes to go through here at low tide so you can actually see the rocks.  He says you do not have to wonder where they are if you can see them. 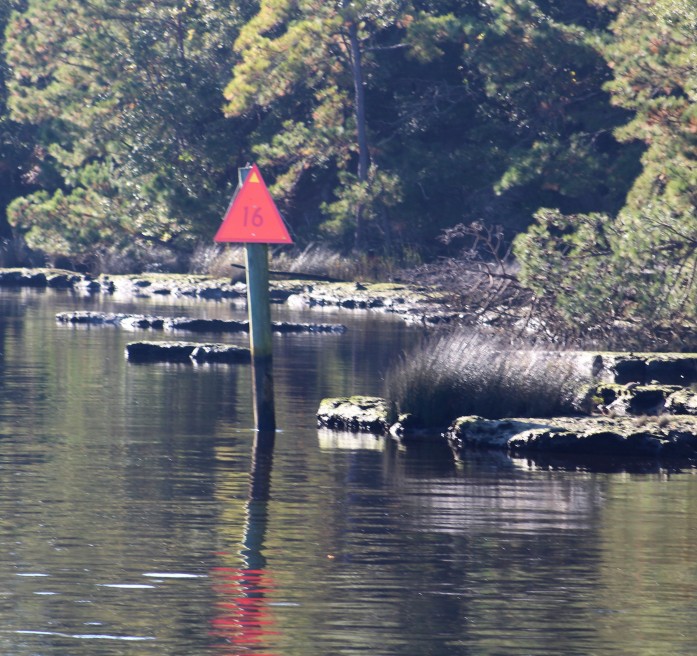 And besides, you also get to see the turtles sunning on the rocks at low tide.

Then it was just a few more miles and the crew pulled into the marina at Barefoot Landing.

The crews oldest granddaughter loves all things Panda, so this one is for you Emma.

There is a bridge that is under construction about ten miles south of Barefoot Landing.  They have the waterway closed from 7 a.m. to 7 p.m. on Friday.  The winds pick back up over the weekend, so the crew will not move again until Monday.  They hope to make it to Charleston by the end of next week.

← Waiting and Wind
The Duck Hunt →