Cap the Week in Cape May 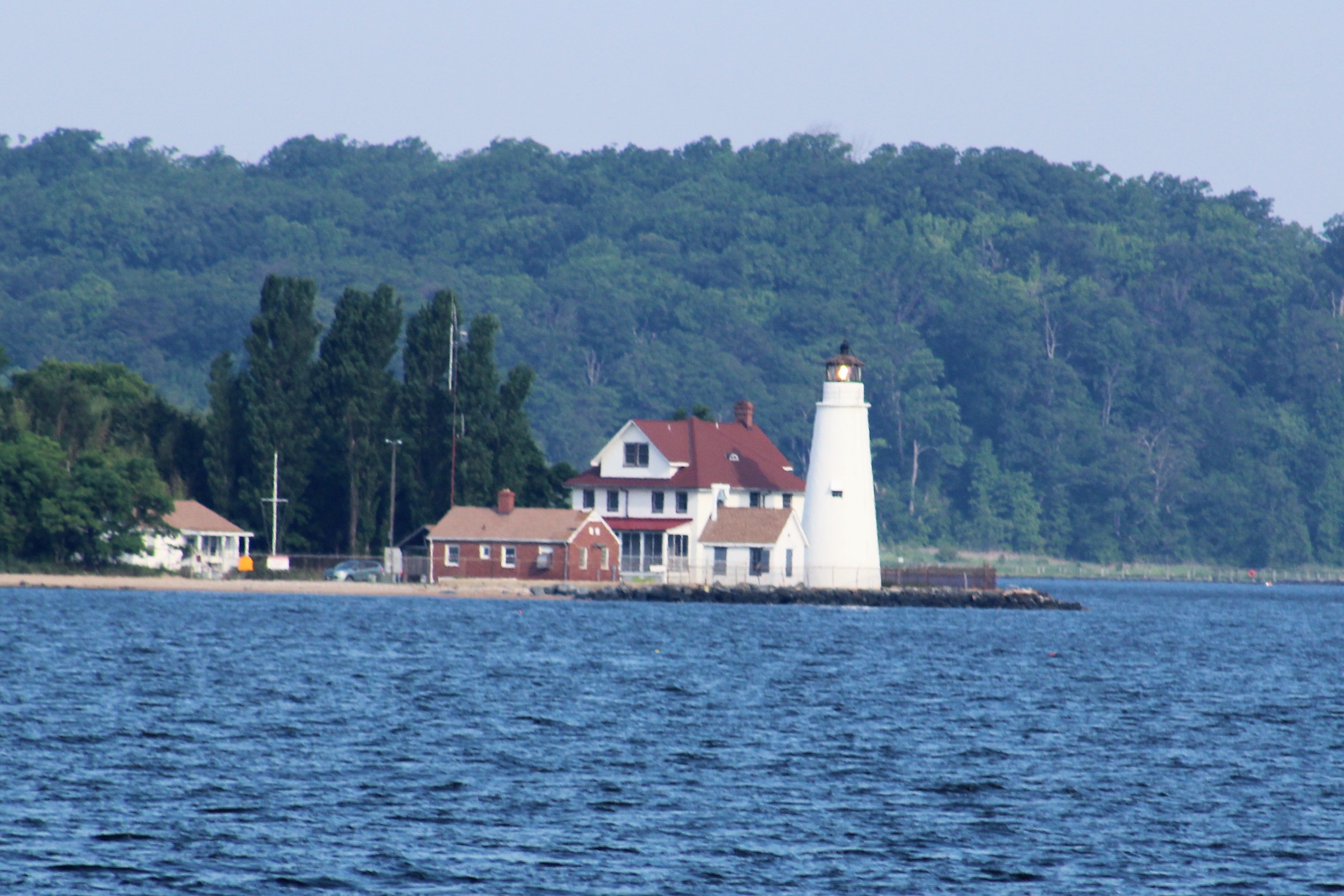 We have had two new virtual crew members jump aboard in the past week by following the Blog. Welcome aboard Big Dave S. and Life at 5 mph! 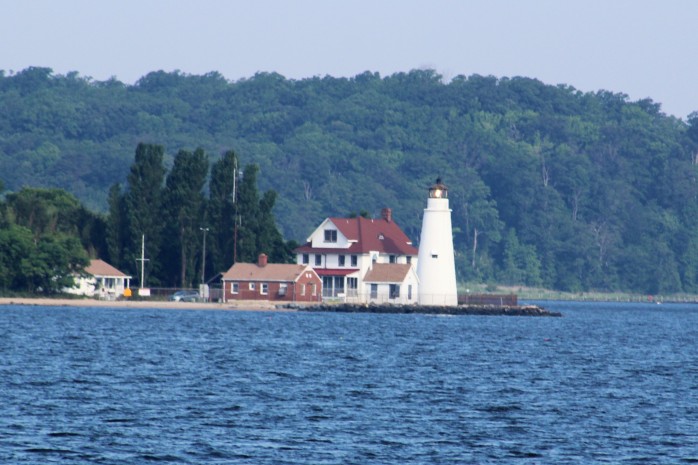 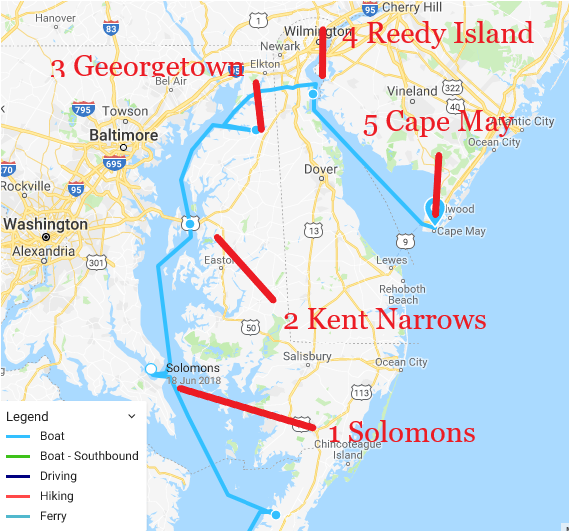 The crew experienced good and favorable cruising weather which allowed them to put in 5 solid days of travel:

Click on the link to read the day-to-day travel log. This includes weather report, sea conditions, captain’s log, and a summary of the day’s experience.
The voyage of discovery did answer the following questions this week:

This week’s video shows Still Waters II  journey up the Chesapeake Bay, Cross the C&D Canal into the Delaware River, and then cruise down the Delaware Bay to arrive at Cape May, NJ.  Enjoy!

The week did not get off to a very good start.  The skipper moved the boat over to the fuel dock so he could pump out the holding tanks. Unfortunately, when he got done and was putting the hose and nozzle back up, he broke the valve handle. This has basically rendered the valve inoperable. He went in the office and told the dock master what happened and agreed to purchase a new handle.

The fuel dock at The Wharf 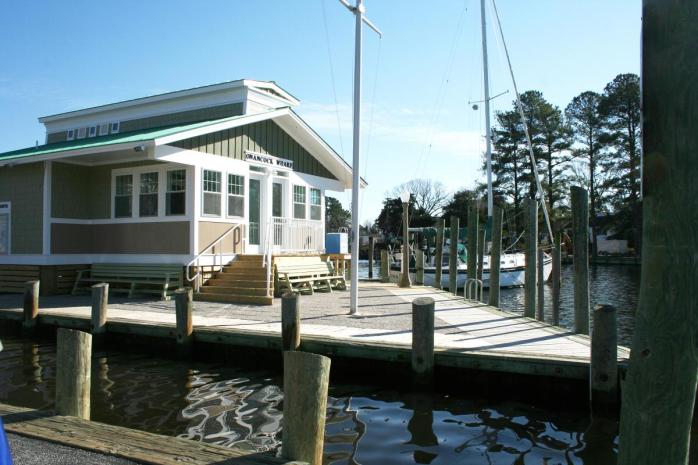 With a blunder like that, one needs some comfort food. So the skipper headed up the street to the Corner Bakery to get some of their melt in your mouth donuts and donut holes. He consumed the donut holes as he walked back to the boat. After boarding the boat, the crew shoved off and headed towards the Solomons. 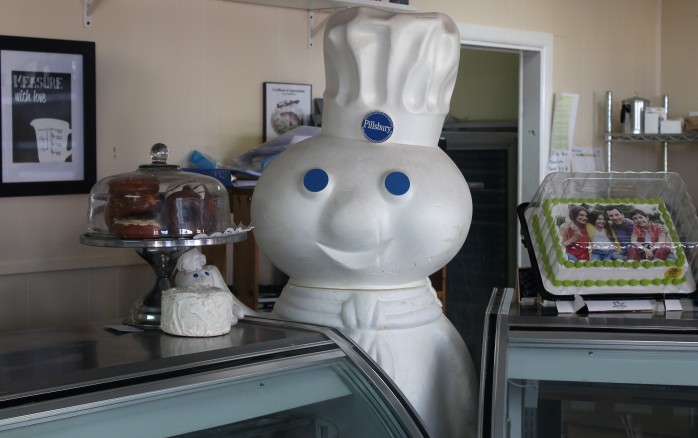 The cruise was uneventful, which is a first for this area. Seems that in the past, these waters have been particularly unkind to the crew. With light winds and following seas, the day turned into an enjoyable day on the water.

A hard days work at the office 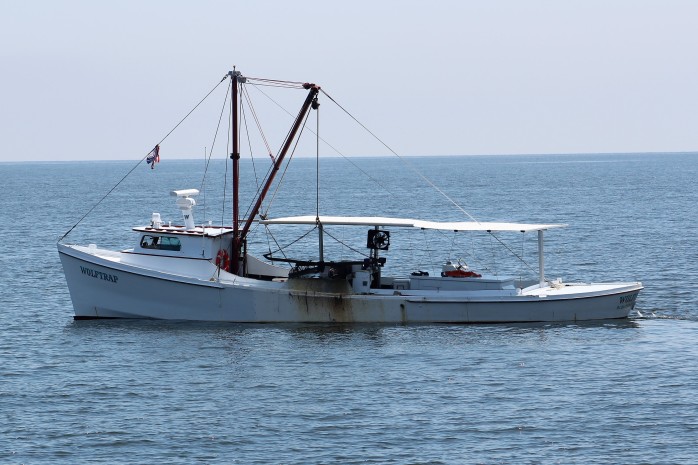 Well, except for the heat and humidity. By the time the crew arrived at the anchor spot, the temperature had climbed to 90, and the humidity was in the 90’s also. The skipper looked at the weather and the temperature was not going to fall below 80 until about 0400. And then it would only drop to 78. The crew talked it over and decided that a marina with air conditioning sounded like a good idea.  The skipper called Calvert Marina and secured a slip for the night. 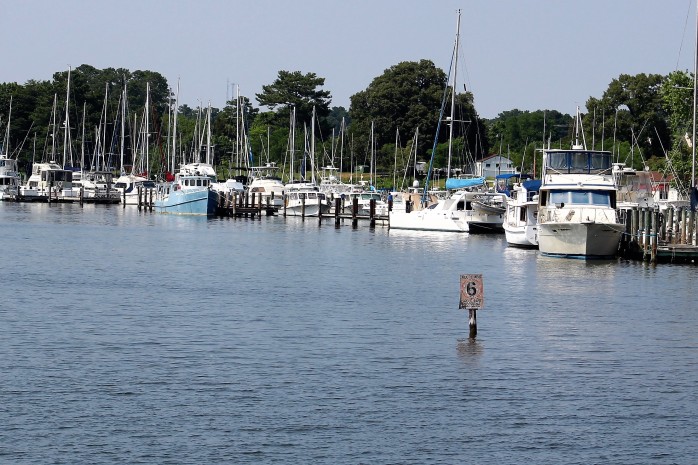 The winds continued to be favorable, so the crew made way to Kent Narrows today. Along the way they saw numerous Sting Rays. Some were feeding on top of the water, while others were swimming in groups of two, three, and even five.

Sting Rays are hard to catch on film 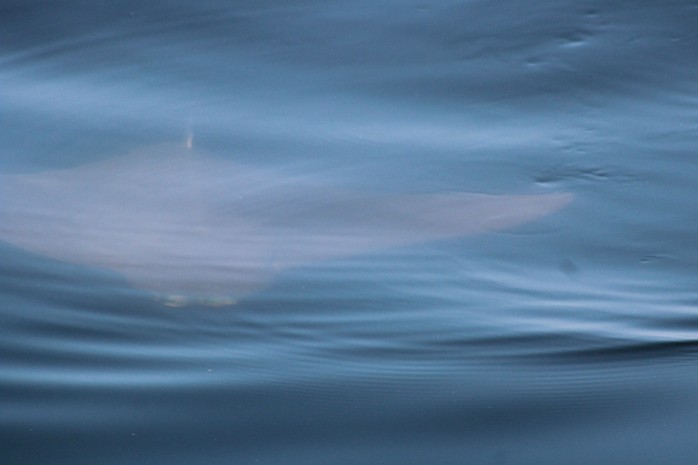 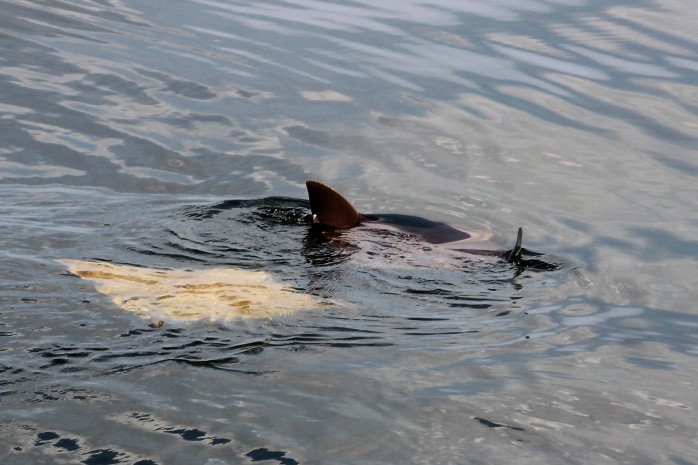 Keeping an eye out for Sting Rays helped make time go by as the crew continued north on the Chesapeake Bay. The winds continued to be under 10 mph which made for some calm conditions.

The crew did not see much as they were crossing the Bay again and land was far off. However, when they entered the Eastern Bay they began to encounter a steady stream of boaters headed out to the main Bay. 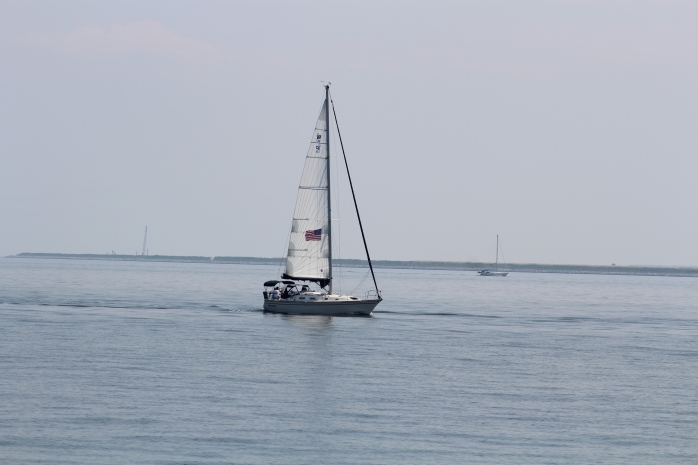 One boater ran into some trouble though. The engine of the vessel in distress just stopped working. Once they lost their engine, they also lost their electric power so the radio would not work. To top off the trifecta, nobody on-board had a cell phone so they had no means to call for help. They did manage to wave down a passing vessel and get some help.

The skipper laughed when he heard the name of the assisting vessel……. Surprise.
After Surprise got the Coast Guard involved, Tow Boat US was called to pull the boat in distress to St Michaels. Listening to the radio transmissions, the skipper would not be surprised that the vessel in distress only ran out of fuel.

After listening and confirming that the vessel in distress was going to be ok, the crew made way to the Jetty Restaurant where they docked and dined. The restaurant agreed to allow the crew to spend the night on the dock, so the skipper plugged in the power cord and the Admiral fired up the air conditioning units. 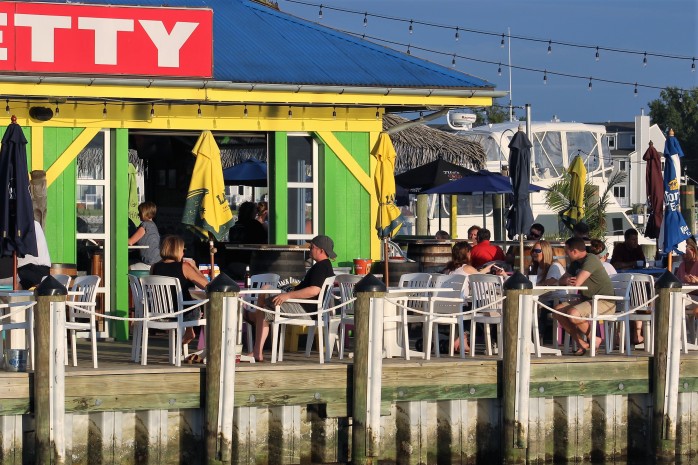 Late last nite, a fishing boat pulled in with two small boys aboard, perhaps ages 4 and 5. The crew watched them play on the docks as their Dad worked on the days catch. It appeared that the boat sold their catch directly to the restaurant and then spent the night on the dock.

This morning the fishing boat was prepared to leave about 0630. Only one of the boys was up moving around. The skipper noticed the second boy had managed to crawl to the doorway from the cabin, but was still laying on the deck. The skipper waved and talked to the man a few minutes. He said he would stay out today and fish, then be headed back home with the boys. He had been out since Sunday, Fathers Day.

The skipper asked about the sleeping son. The man mentioned that the boy had a hard time getting going in the morning, but once he got started, he was full throttle all day. The scene reminded the skipper of many fishing trips he took with his dad and brother back in the day.

The skipper (dark hair) and his brother on a camping/fishing trip, Circa 1967 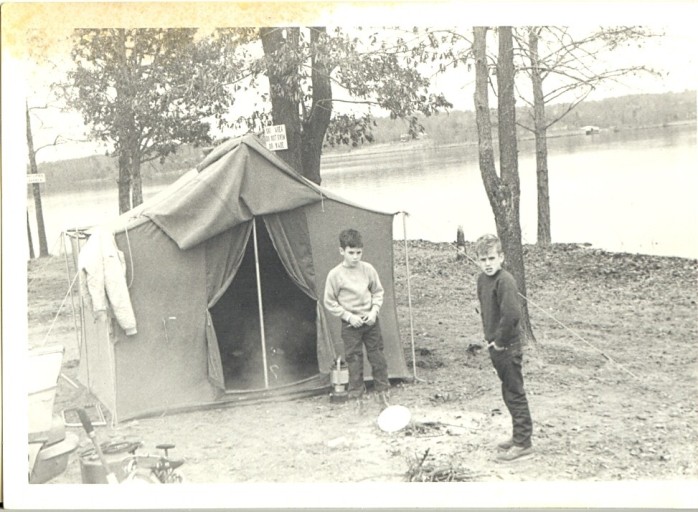 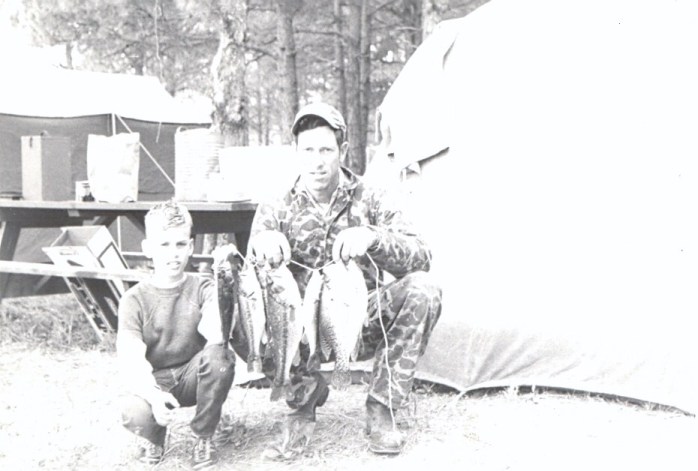 The cruise today took the crew thru the Kent Narrows, Chester River, Chesapeake Bay, and then up the Sassafras River. This was the fourth day in a row with favorable cruising conditions and calm seas on the Bay. These could just be a record for the crew. Usually they have had more than their fair share of rough days on the Bay.

The crew stayed in Georgetown Yacht Basin on Thursday to take advantage of the courtesy car.  They drove to Middleton, Delaware to re-provision for the next leg of the adventure.  Stopping here and shopping in Delaware has the added bonus of no sales tax.

The crew woke to a dreary grey overcast morning with the winds blowing hard out of the east.  The run of fair winds has come to a stop.  Oh well, it was good while it lasted.  Because they would be travelling north along the eastern shore, they decided that they would go ahead and cruise even though the winds were 15-20 mph out of the east.

Turns out the shore kept the waves from building up and the crew had an ok day cruising thru the C&D Canal.  When the crew first entered the Delaware River though they found some 2-3 foot waves.  They made way south down the river till they found the marked gap in the jetty leading to the Reedy Island anchorage.  They safely passed thru the jetty and the waters calmed down.  They then pulled up along the west bank of Reedy Island and anchored to use the Island to block the east winds.

This was the first and possibly the last time the crew anchors at this spot.  They dropped the hook here so that they would save an hour off their travels tomorrow.  However, it was a rolly night due to the winds, and waves coming over the jetty at high tide.  Also, their is some risk entering into the anchor spot due to the narrow gap in the jetty.  Local legend has it that at least two boats are lost here each year because they run aground on the rock jetty.

The Ghost Rider on the rocks after tide went out, 2016.  This link explains how the Ghost Rider came to land on the jetty and become a total loss. 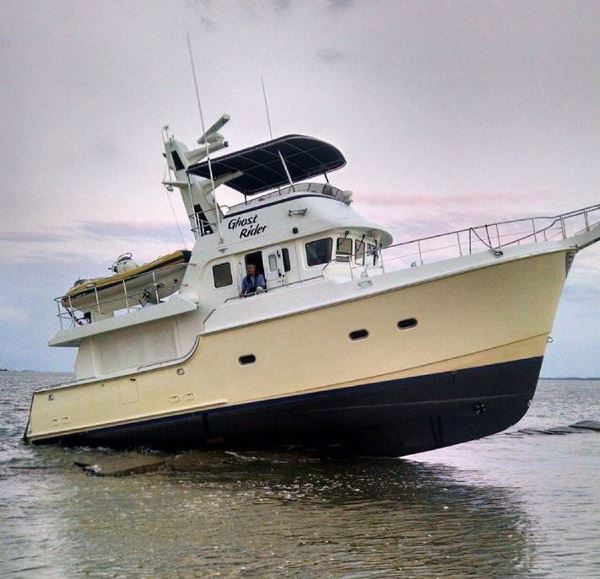 The crew woke early and passed back thru the jetty and headed to Cape May.  The winds had died off about 0500; however, there is another storm which is supposed to blow in late in the afternoon.  The crew wants to be secure in the slip before the storm hits.

Conditions continued to be dreary.  Cloud cover was low and a light fog and drizzle kept visibility under a mile for much of the day. 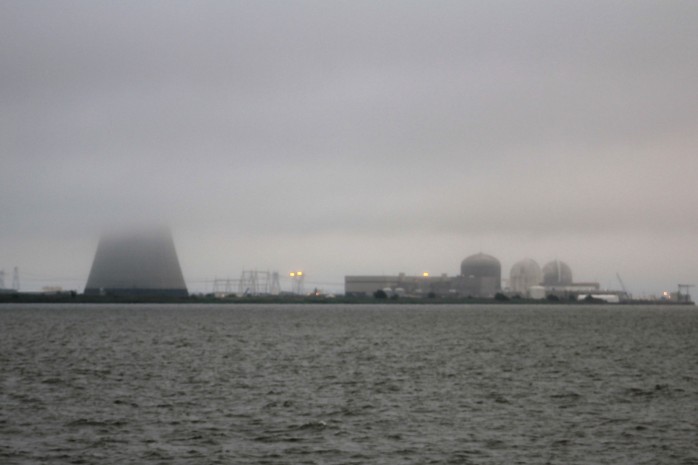 Was a bit hard to see the lighthouse, but the fog horn was working well. 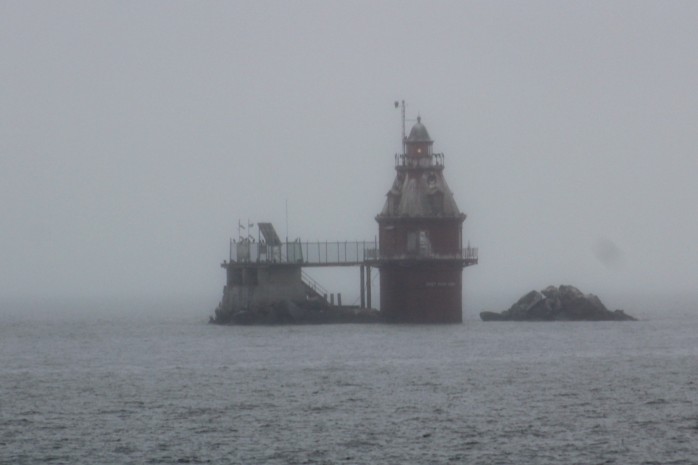 After arrival in Cape May, the crew went over to the Lobster House to have a late lunch and celebrate three years living aboard Still Waters II. After lunch, the Admiral went walking around town.  She found a restaurant with an interesting story on the menu.  The following is from the Lucky Bone Restaurant in Cape May………

The Lucky Bone traces its name back to the days when Cape Island was a whaling village and when superstitious sailors never set sail on Friday.  These brave watermen would stow away good luck charms to protect them from the perils of the mighty sea.  The Lucky Bone refers to the odd hook-like claw found only on the male horseshoe crab.  It was worn by these men to keep them safe between the wind and the frightening mighty water, so they might return safely to their loved ones at home. 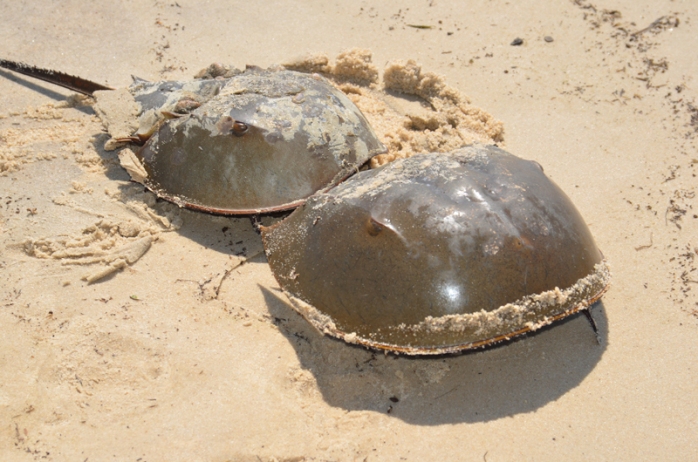 Boat Name of the week 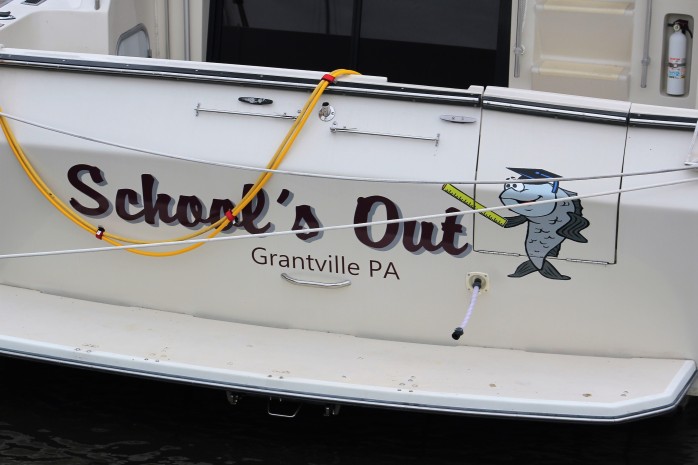 The weather will continue to be an issue until the crew gets up the Hudson River.   Wednesday looks like a no travel day up the Jersey coast with winds greater than 20 mph.  Normally the crew takes three days to travel from Cape May to New York City.

The skipper is planning to make a 100 mile day on Monday and then complete the run to New York City on Tuesday so they can avoid the wind.  They will then set their sites to at least make Hyde Park by the end of the week.  If things work out well, they may even arrive at their summer cruising destination, the Erie Canal.

2 Comments on “Cap the Week in Cape May”