End of the Erie Canal 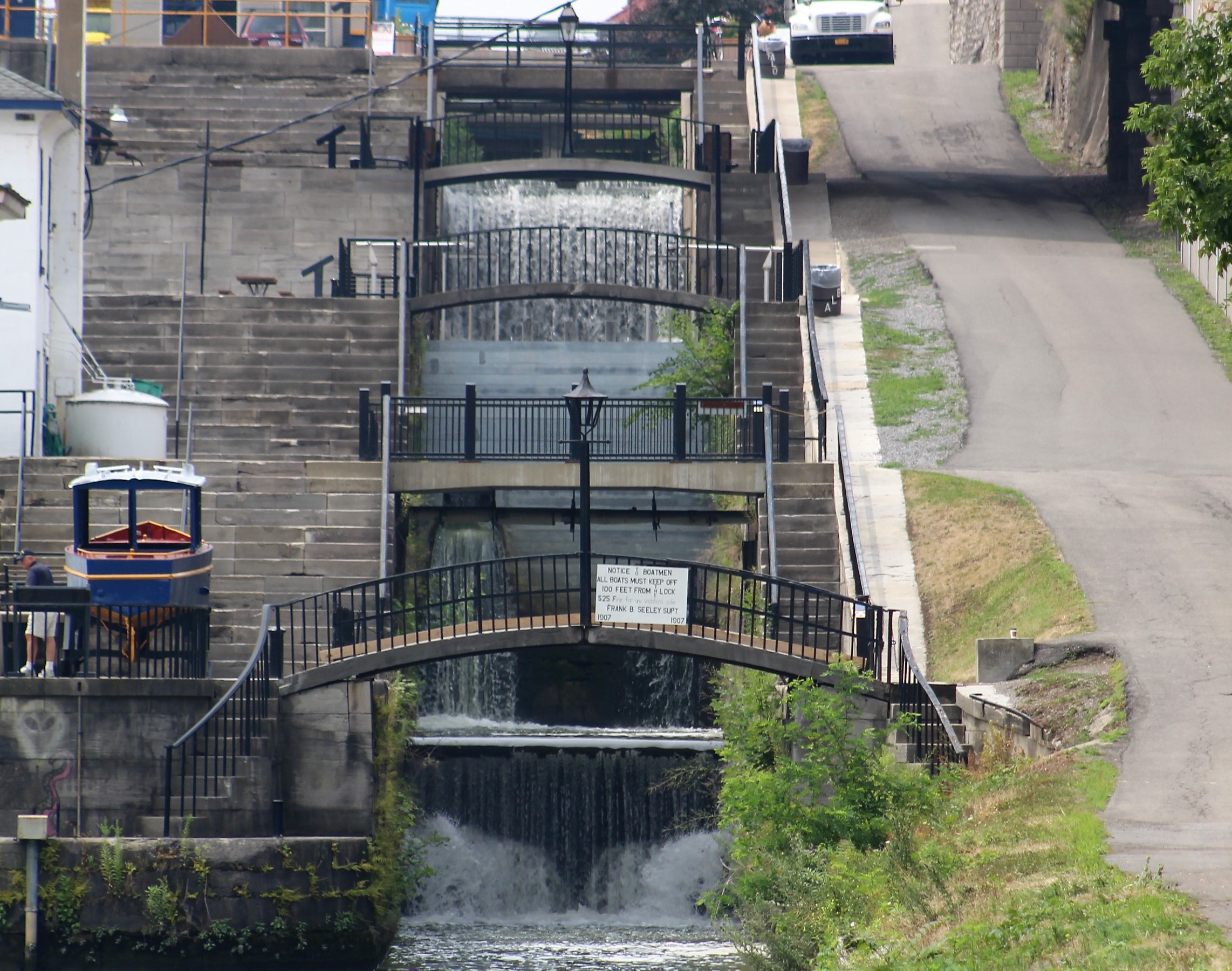 The original Flight of Five Locks built in 1825 at Lockport 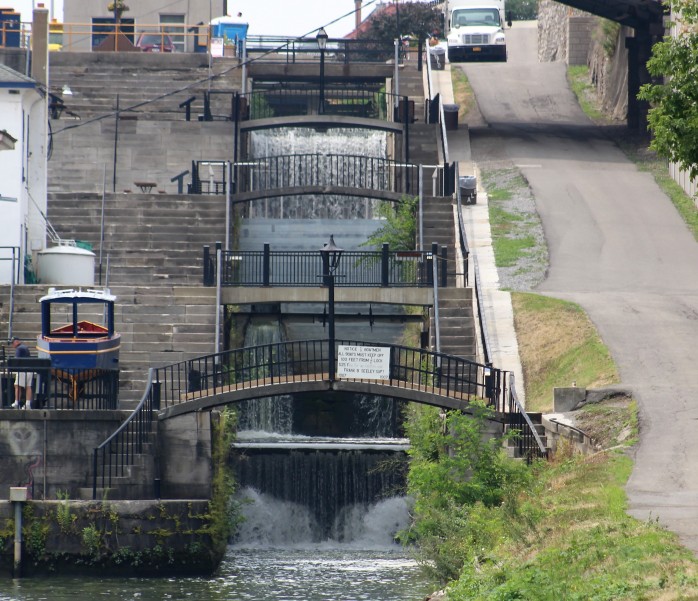 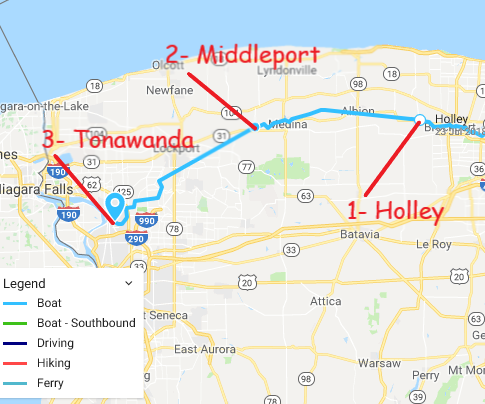 The crew made three short hops on their way to the end of the Erie Canal at Tonawanda (3).  On the way, they also made stops at Holley Canal Park (1) on Monday, and Middleport (2) on Tuesday.
Click here to read the day-to-day travel log. This includes weather report, sea conditions, captain’s log, a summary of the day’s experience, and a few pics of the route.
The voyage of discovery did answer the following questions this week:

This week’s video shows Still Waters II cruising the end of the western Erie Canal.  She goes under a few more low bridges and then completes the last two locks at Lockport.   She completes the week by watching fireworks over Niagara Falls. Enjoy!

Today the crew traveled 12 miles, but would be greeted by three low lift bridges.  This would not normally be a problem, except the lift bridge operators are roaming operators, and have control over two bridges.  Sometimes when you arrive at the bridge, the operator is at their other bridge doing an opening.

The Lift Bridge at Adams Basin

When the crew arrived at the Adams Basin Lift Bridge, the skipper noticed a NY Canal Work Boat tied to the wall.  When the skipper hailed the bridge operator, the Work Boat responded and said the Bridge Operator was on her way from Spencerport.  Sure enough, about 5 minutes later a car pulled up and a women jumped out and ran up the stairs.  The traffic was stopped and the bridge opened.

The crew continued down the canal towards Holley but first had to pass under two more lift Bridges in Brockport.  The first bridge was open for maintenance so when they arrived at the second bridge the operator quickly opened the bridge and allowed the crew through.

The crew docked along the wall and headed down a path to go see the local waterfall.

Path to the waterfall

After walking around the pond, left turn down the hill

Half mile later, the waterfall 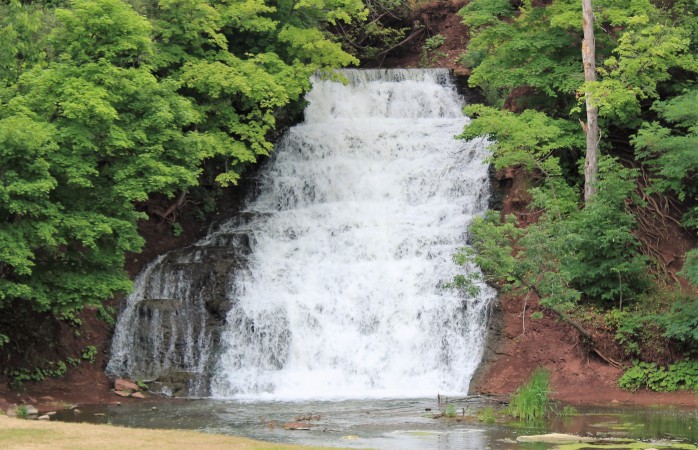 When the crew arrived back at the boat, they learned that the Lois McClure would be arriving in a short while.  The boat is a replica canal boat that gives out free tours along the canal route.

Just beyond where the Lois McClure landed along the wall, an historical marker told the story about the Norwegians who initially settled in the area.

The first Norwegians arrived on a vessel named the Restauration.  By US Maritime law, the vessel was only permitted for 16 passengers.  When the vessel arrived in New York City on October 9, 1825, there were 53 passengers on board.  The vessel was impounded, the Captain and spiritual leader, Lars Larson Geilane, was arrested.  The passengers continued on up the Hudson River and then took the Erie Canal to Holley.

Their leader sold the ship, solved his legal problems, which included a pardon from President John Quincy Adams, and headed up the Hudson River.  When he arrived in Albany, he found that the Erie Canal was frozen over and closed for the season.  He did not let that stop him from catching up with his passengers.  He strapped on some ice skates and made the 290 miles to Holley.

About the time the crew was shoving off the wall, a rental Canal Boat went by and requested that the Holley Lift Bridge be opened.  The Bridge Operator responded and said that she would open the bridge as soon as she could see all three boats that were arriving.  The skipper requested to also pass thru on the opening and permission was granted.

The canal rental boats only run about 6 mph, so the skipper set the throttle at 6 mph and cruised to the next bridge with the three other boats.  The three rental boats are a Boy Scout Troop out of Falmouth, MA.

When the four boat flotilla arrived at the next lift bridge, the operator had arrived and had the bridge open to allow passage.  The skipper sped up and left the three Boy Scout rental boats behind after the second bridge.

While traveling along, the crew met a New York Canal Work Boat named Dewitt Clinton.  The boat was named after the Governor who was responsible for initiating the Erie Canal.  One smart thing the Governor did when they started building the canal back in 1817 was to insist that they start in the middle and work back towards the Niagara and Hudson Rivers.  His thinking was that if they ran out of money digging the original canal they would not have connected to water so the completed parts would be dry and useless.  To make the canal usable, he believed that the lawmakers would then fund more money to complete the canal.

When they arrived in Albion the crew had two lift bridges to clear.  The good news was that the two bridges are within eye sight of each other, maybe a quarter mile apart.  The bridge operator opened the first bridge and the crew just idled down to the second bridge.  After lowering the bridge, the operator hopped in his car, drove down the side street, hopped out of the car, and ran up the stairs to open the second bridge.

About a half hour later, the skipper heard the Boy Scout boats asking for the Albion Bridge to open.  The skipper sure was glad the Bridge Operator allowed our crew thru instead of making them wait for the three other boats.

The Admiral noticed that the crew was getting close to Lake Ontario, less than 20 miles.  A little later the crew passed a sign that stated that they were at the most northern part of the Erie Canal, how about that. 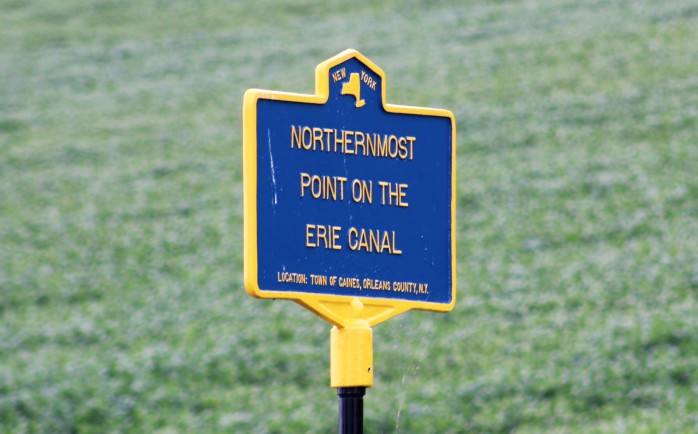 The crew has started to notice many Apple Orchards along the water in these parts.  Looks like Johnny Appleseed was busy in this section of western New York.

The crew then literally crossed something very strange.  They cruised over the top of a road.  The design of the canal built an aqueduct to carry the canal over Culvert Road back in 1825.  It is the only road that crosses under the canal.

The view of Culvert Road from the boat

The crew then pulled into Medina where they planned to stay for the night.  The crew got lunch and were about to go explore when they noticed that the Boy Scout boats had arrived and docked.  The skipper noticed that the leaders were huddled up discussing something.  He got off the boat and noticed that one of the boats was not able to hook to a power stand.  He approached the leaders and asked how much trouble no power would be for one of the rental boats.  A man said that they were discussing their options but were thinking of continuing on.  The skipper offered up that he would leave and allow the boat to have his spot on the wall.  He thought it would be easier for one boat with two people to leave than three boats and who knows how many people to round up and leave.

So the Admiral and skipper shoved off and made another 5 miles down the canal to stay at Middleport for the night. If nothing else, they are 5 miles closer to their destination on Wednesday.

Under the banner of ‘No good deed goes unpunished,’ the crew ran into a few delays as they traveled the canal today.  The first one happened before the crew could even get started.  The three Boy Scout boats passed by and got thru the lift bridge before the skipper could get off the wall and get going.  This caused a 45 minute delay as the bridge operator left and went to open the Gasport Lift Bridge.

Things seemed to be going just fine as the crew continued down the western Erie Canal.

Well, until they arrived at the Lockport Lift Bridge about 1140.  After getting under the bridge, the Lockport Lock Operator hailed the skipper and directed him to stop and tie up along the wall.  The operator said they were on a reduced operating schedule due to some herbicide treatment upstream and the next lock opening would be at 1230.  The skipper did as directed and stopped at Upson Park.  The crew enjoyed lunch at the park.

View while waiting on Lock E34/35 from Upson Park

While waiting, the skipper discovered that there is a cave and under ground boat tour that starts in Upson Park.  The skipper will work out a way to come back here and take the tour.

About 1230 the skipper noticed two tour boats headed to the lock.  The Lock Operator called and told the skipper to follow the tour boats into Lock E34. 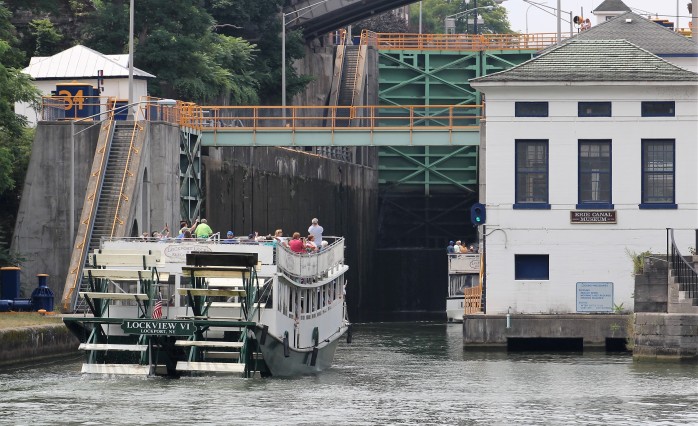 After exiting Lock 34, the boats immediately entered Lock E35 and went up another 25 feet.   Once out of the Lock the tour boats ran down the canal for about 10 minutes and then turned around and headed back to the locks.  The U-turn was pretty impressive.  The skipper hailed the Captain and told him good job once he completed the turn around.  The Captain said thanks and added that there was nothing to it, well as long as nothing went wrong.  Nice commentary on how life works. 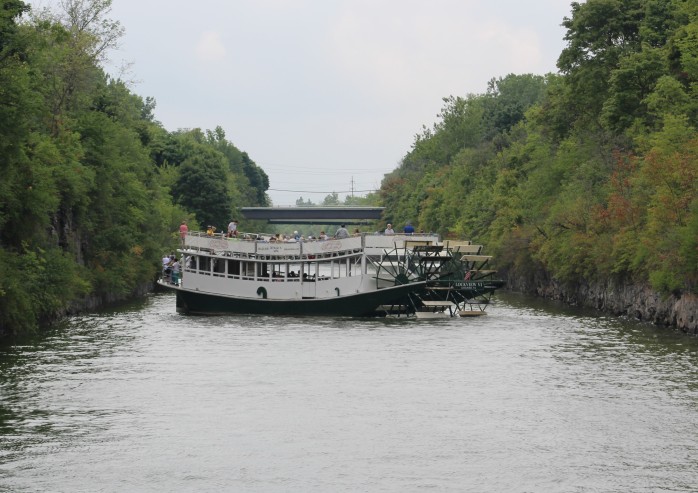 After getting passed the tour boats, the crew overtook a guy in a kayak.  The skipper slowed down and talked with the guy.  His name turned out to be Rich Brand.  He left New Orleans on Jan 3, 2016 to complete the Loop.

Rich Brand in his kayak

Now that is doing the Loop the hard way.

The skippers son, AKA AMF Delivery Service showed up in Tonawanda in the afternoon.  You may recall that the skipper left two props in Brunswick, Georgia to be repaired.  The repair took much longer than expected, and when the marina called and said that the props were ready to be picked up, the crew were in upstate New York.

The skipper called his son to see if the boy could swing by Brunswick and pick up the props.  His son is an over the road truck driver.  He agreed and managed to get a load to Orlando, Florida.  On the way down to Orlando, he stopped and picked up the props.

He then secured a load back to Kansas City, where he transferred the props to his car.  He then delivered the props to the skipper in Tonawanda.  He will also stay thru the weekend and enjoy the area. 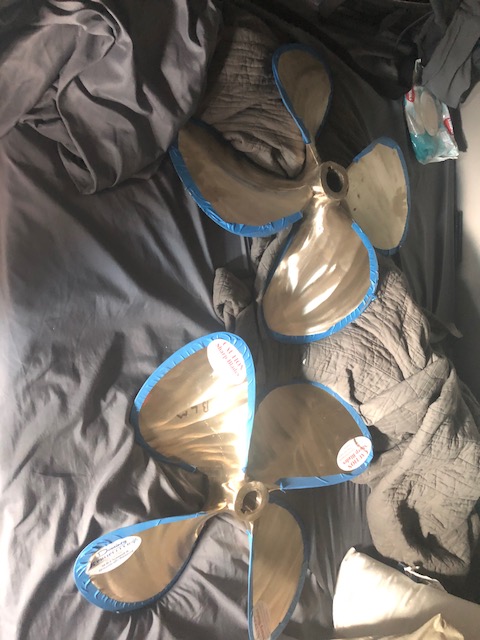 With the boy on the boat with a car, the skipper and the boy set out o run several errands.  First of which, was to buy a few youth lifejackets for the arrival of the grandkids.  While on that mission, they also bought a throw ring.

When the dinghy is on the swim platform davits, approaching boats cannot see Still Waters II name on the transom.  The throw ring fixed this problem.  The boy supervised the skipper putting the boat name on the throw ring.

After shopping, the boy also helped the skipper clean the ‘moustache stain’ off the bow of the boat.  So another shout out thanks to the boy. 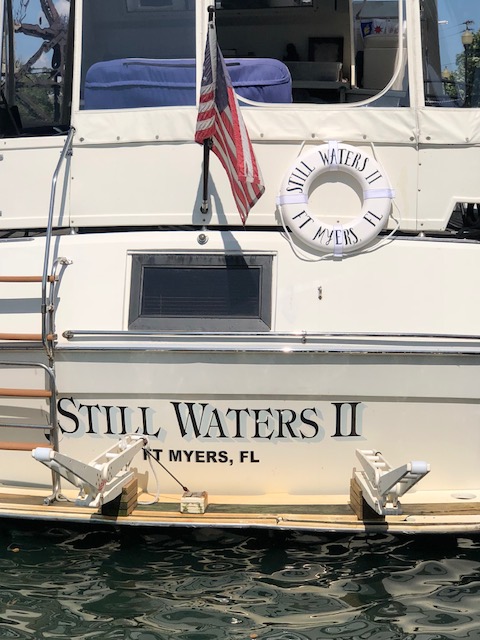 The crew ended the week by going out to Niagara Falls to see the falls illuminated and watch a short fireworks show over the falls.

A boat went by with Remax Realty advertisement on the side.  The name of the boat was:

The extended crew will visit Lockport and Niagara Falls over the weekend.  The grandkids will be on their way on Tuesday, and our crew will head out on Lake Erie on Wednesday.  They hope to make the Rock and Dock in Cleveland to visit the Rock-N-Roll Hall of Fame by the weekend.

← Still Waters II, by Shan Miller
Falling Over the Falls →