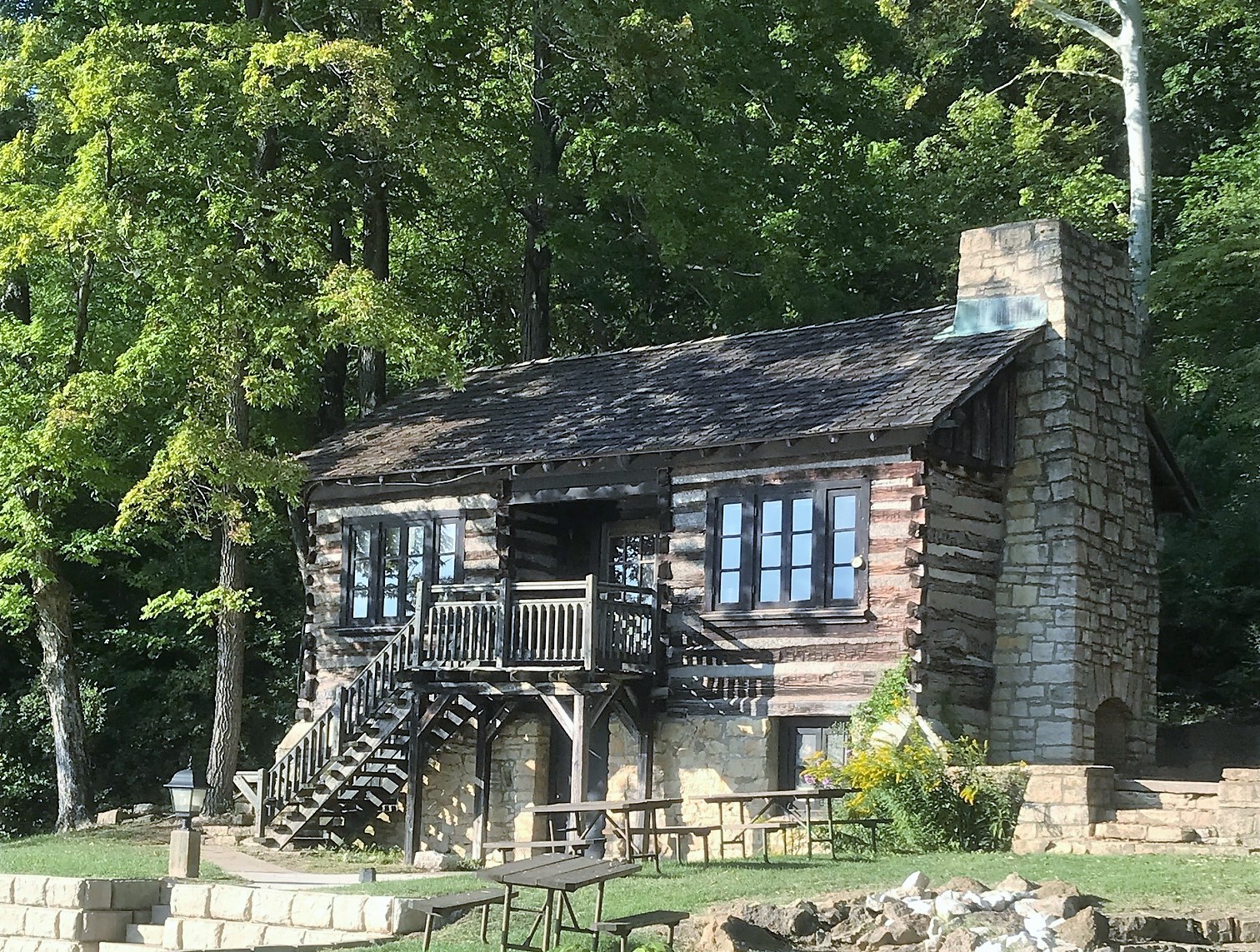 Log Cabin in Marquette State Park in the Land of Lincoln 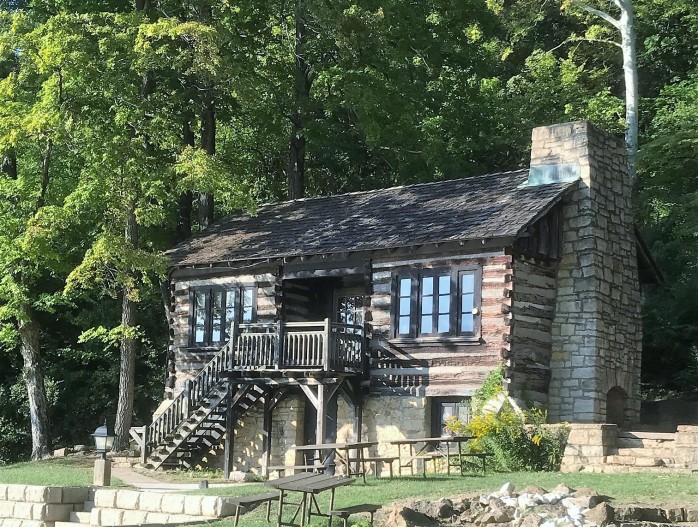 Mark Twain Quote of the Week

Twenty years from now you will be more disappointed by the things you didn’t do than by the ones you did.

So throw off the bowlines, sail away from the safe harbor.  Catch the trade winds in your sails.

This quote has been attributed to Mark Twain, but has not been verified. But the skipper thinks it is a good one to start with anyway.   Kind of describes what the crew has been doing for the last several years.

Welcome aboard to D. Wright.  Hope you enjoy the ride up the Mississippi River. 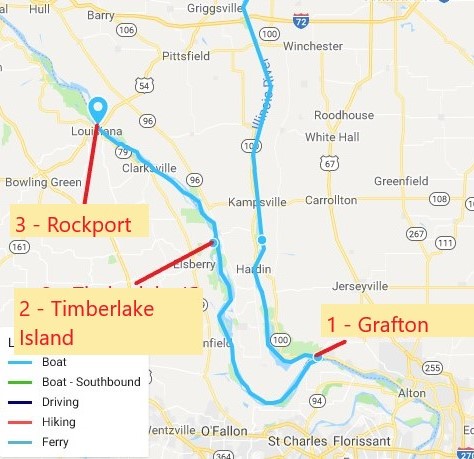 The crew headed north on Friday, and anchored at mile 258 near Timberlake Island (2).  Saturday, the crew made way to Rockport (3) where they will spend the weekend at the Two Rivers Boat Club.

While waiting the skipper has been doing some research on Louis Joliet and Jacques Marquette.  He and the Admiral have also been working on a few boat projects during this down time.

The main project the skipper tackled this week were stopping a few water leaks into Still Waters II when it rains.  They managed to get a covered slip in Grafton, so it seemed to be a good time to remove and re-caulk many of the old joints around the boat.

Since the washing machine has decided to die, the Admiral has been busy lugging clothes to the laundry facility.  Finding a new washer that will fit thru the 23 inch door opening has proven to be problematic, but the search continues.  If the skipper knows what is good for him, he better be finding a new washer though.

Exploration of the Upper Mississippi River

Since Mackinac Island, the crew has seen many statues, towns, bridges, roads and other infra structure named after both Louis Joliet and Jacques Marquette.  The skipper decided to find out more about these two guys in between working on the caulk project. 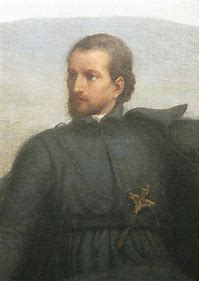 Jacques Marquette, also known as Pere Marquette and James Marquette, was a French Jesuit missionary.  He is credited with founding the first European town in Michigan, Sault Ste. Marie in 1668.  Actually he founded a Catholic mission.  French colonists eventually established a fur trading post there also. 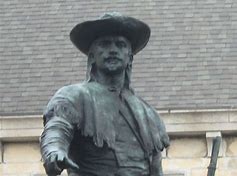 Louis Joliet was a French Canadian explorer.  Initially he was on a path to be a Jesuit priest, but decided to follow his dreams as a fur trader instead. 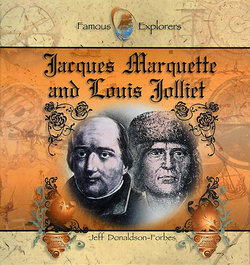 Joliet and Marquette took Mark Twain’s quote serious, and teamed up to explore the upper Mississippi.  They left St. Ignace, Michigan with two canoes and five other adventurers on May 17, 1673.  A month later, they had made it down Lake Michigan and to the end of Green Bay.  Then portaged across modern day Wisconsin and landed at the Mississippi River near present day Prairie du Chien on June 17.

The expedition then traveled south along the Mississippi.  When they got within about 400 miles of the Gulf of Mexico, they began encountering natives with European goods.  They decided that they would turn around and head back north before they had an unfriendly encounter with Spanish explorers.  You may recall from your history lessons that Hernando de Soto discovered the southern entrance of the Mississippi back in 1541. 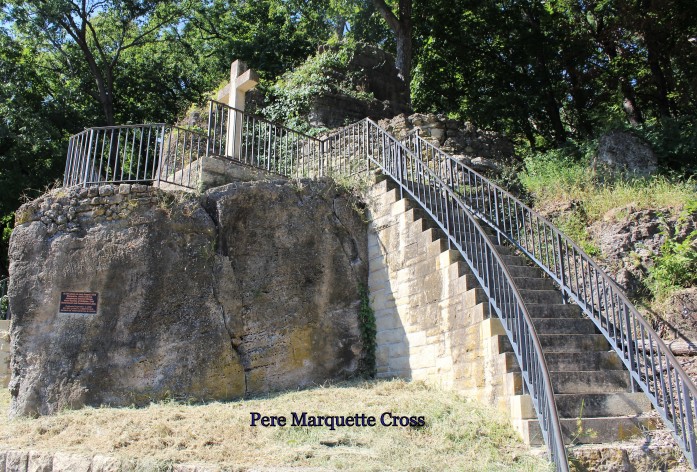 The expedition turned back at the mouth of the Arkansas River.  When they arrived at the Illinois River, natives informed them of a shorter route to Lake Michigan.  The expedition continued north on the Illinois River to the Des Plaines River, near modern Joliet.  From the Des Plaines River, they used the Chicago Portage to the Chicago River and then went downstream to Lake Michigan.

The crew hosted ‘Docktails’ aboard Still Waters II with three other boats.  One of the boaters, Bert, told an interesting story about a disillusioned young man, Peter Jenkins, who wrote several books about his journeys walking across America.  He left New York in 1973 and arrived in Oregon in 1979.

Bert aboard his boat, Touch the Horizon 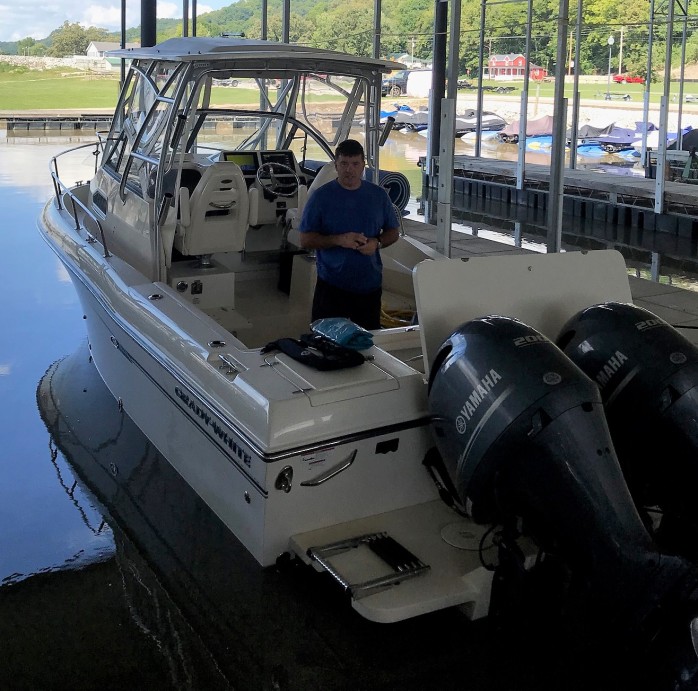 But even more interesting is that in the books, Peter uses a JanSport Backpack.  He started using the JanSport Backpack because Norman, one of the co-founders of the company gave him a backpack early in his journey.  Bert talked about how he had met Norman while doing volunteer work together.  Norman told Bert about meeting Peter and giving him the backpack.  Norman also told Bert about the books.  Bert recommended the books as good reads.  So now the crew is 4 degrees from the author and you are 5 degrees.  Is that cool or what.  And yes the skipper also has a nice JanSport Backpack. 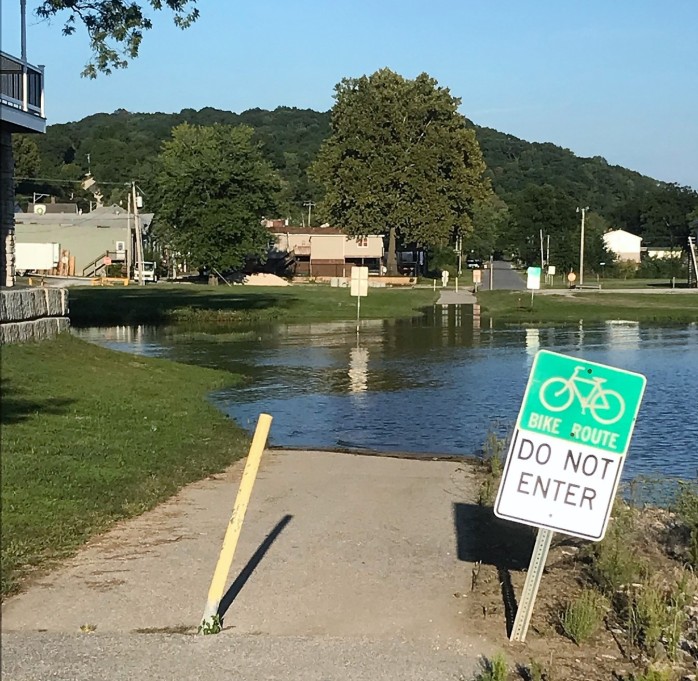 The crew left Grafton and started their way up the Mississippi River at mile 218.  As they were about to pull out of the marina, the American Queen appeared and passed by.  The skipper then pulled in behind her. 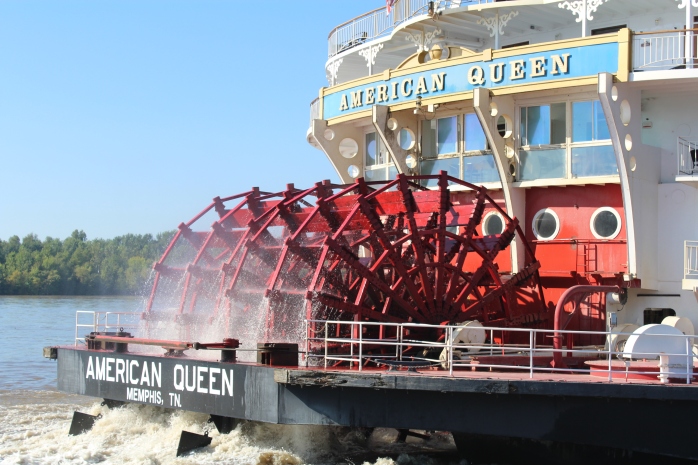 They would spend the day following her up the river.  The crew was not sure what to expect as they ventured north.  The river is very rural and very picturesque.  The crew traveled north 42 miles and did not see any towns along the banks.  This also means there are no cell towers so they have been cut off from the outside world for the day.  It is amazing how dependent our culture has become on the internet. 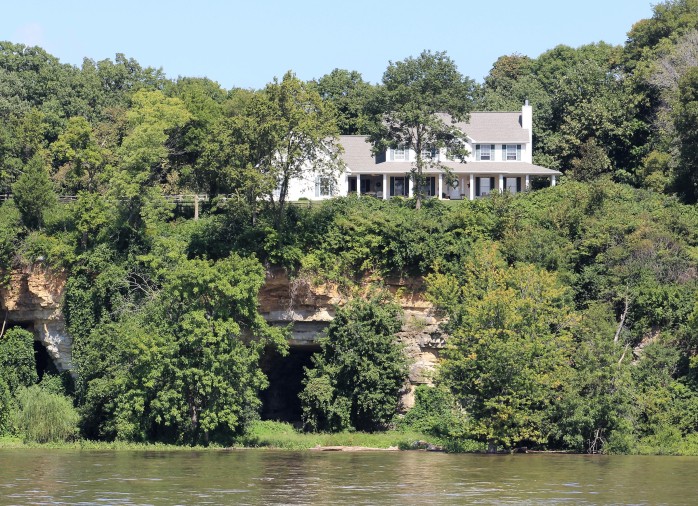 In addition to following the American Queen all day, the skipper spent most of the day playing ‘dodge debris.’  The high water level has caused much debris to float downstream.  The crew is familiar with two boats who have hit debris and caused broken transmissions.  They have heard rumors that there are at least another dozen boaters with prop problems or transmission issues because of the debris.  The skipper has kept a diligent Look Out for debris and as yet has not hit any.

When the crew arrived at Lock 25, the American Queen was in the Lock and there was an upbound tow waiting to enter.  To the surprise of the crew, the Lockmaster put Still Waters II thru the lock before the tow.  As it turned out, the 15 foot step up turned out to be only one foot due to the river running high. 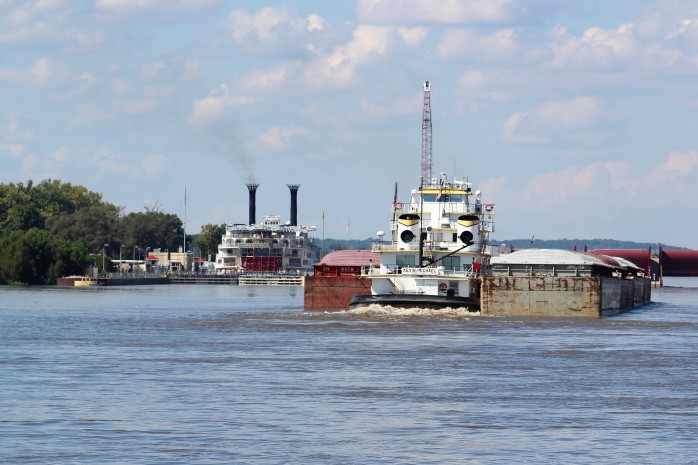 After the Lock, the crew travelled another 16 miles up river.  However, with the high water level also comes high current flows.  The head current was 3 mph so the crew was only making 5 mph Speed of Ground (SOG).  This leads to a long three hours to go those 16 miles.

When the crew arrived at the anchor spot, the skipper anchored just south of Timberlake Island.  His hope was that the Island would protect them from any debris floating downstream.  It was only a few minutes after dropping the anchor that the crew experienced a large debris field.  As hoped the currents around the Island carried the debrief off to the sides of Still Waters II. 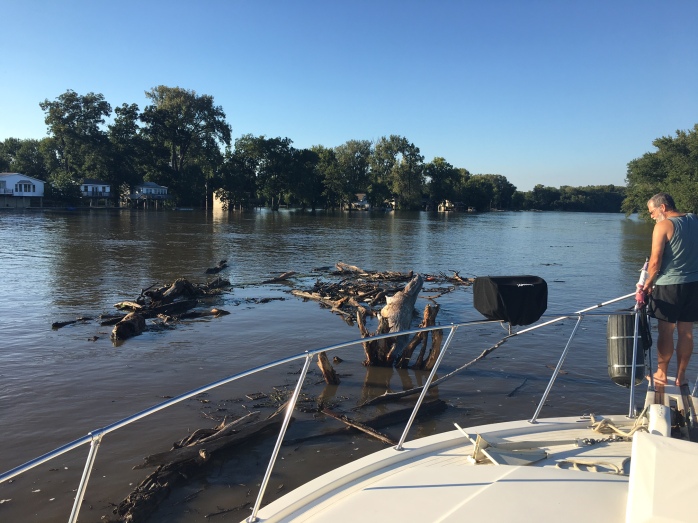 The crew pulled anchor and continued upstream.  Another surprise of the river has been the number of Islands that are sprinkled between the banks.  The Islands add to the beauty of the area.

The crew also saw first hand a situation that they had been warned about, disappearing navigational aides.  Because of the high water levels and current, sometimes the markers get pulled underwater.  Then the marker pops up out of the water.  The warning for navigating is that pilots should not ass/u/me the marker is off station or missing and cruise over the area.  Boats have been surprised when the force of the marker knocks a hole in the bottom of their boat when the buoy pops out of the water.  There have been many missing markers and the skipper has been giving them all a wide berth.

Now you see it 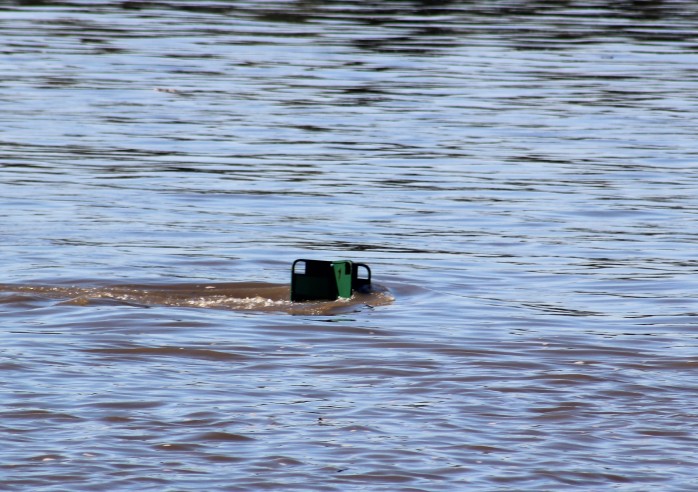 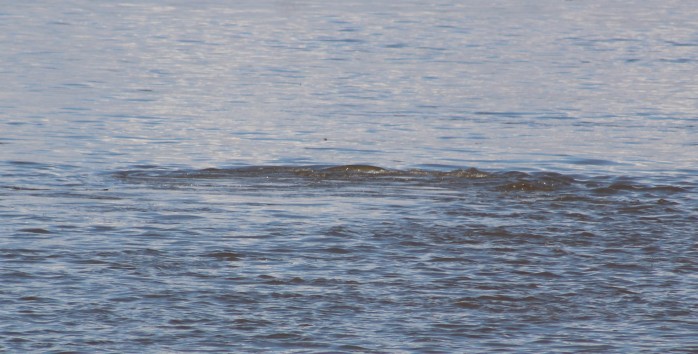 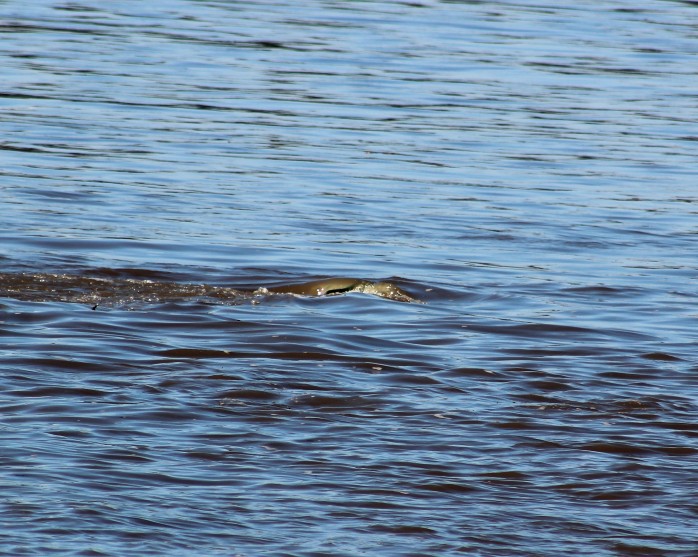 When the crew arrived at Lock 24, there was a tow just entering the Lock.  The Lockmaster told them it would be about 45 minutes to get the tow up before he could get Still Waters II.  After the tow pushed out of the Lock the crew then entered.  As with Lock 25, it was only a 1 foot step up and the Lockmaster allowed the crew to just float in the Lock.  Normally both Lock 24 and 25 would raise the boat 15 feet to the next pool level.  Just an indication of how high the water is running over the dams.

Flooding along the river 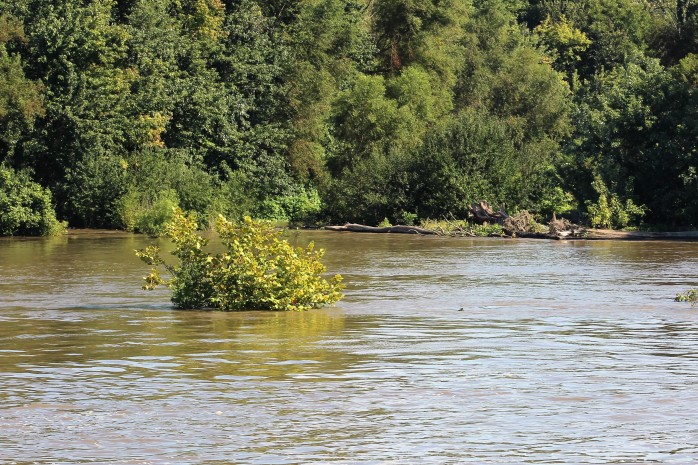 Boat US has released their top 10 names of 2018 based on graphic sells:

1. Grace – This name reflects the elegant and tranquil qualities of the boat, oftentimes owned by someone seeking peace through boating.

2. Freedom – A patriot to its core, this boat symbolizes the meaning of freedom in all senses of the word: freedom to explore, freedom to dream and freedom to discover the world by water being most important.

3. Seas the Day – While this boat owner may feel a loss of control over a declining retirement account, he or she is completely in charge while boating and intends to get the most out of the boating lifestyle.

4. Therapy – Capitalizing on all the joys boating has to offer, this name takes into account the healing nature that boating provides its owner.

5. Second Wind – This boat is perhaps owned by parents constantly yearning for that second boost of energy in life. Spending time with their boat gives them rejuvenation despite the craziness of being mom or dad.

6. Serenity – Born out of the “hippie era,” this name illustrates peacefulness in both the boat and the owner. Simply explained, this boat owner is completely untroubled while out on the water.

7. Perseverance – A relentless vehicle that never stops exploring, this boat likely has more than 10 years on it with a few dents and scratches but also holds countless memories of good times.

9. Knot on Call – The moment a boater steps onto this boat, his or her responsibilities are left at the dock. The owner enjoys and encourages leaving worries behind and fully immersing in the boating experience.

10. Pura Vida – More than just a Costa Rican saying meaning “pure life,” it reflects a way of everyday living by example – one that thrives on no worries, no fuss and no stress.

The crew will continue northbound with hopes of making short daily runs of about 25-30 miles due to the strong head current.  They hope to make about 200 miles during the week and end up at Le Claire, IA by the end of the week.

2 Comments on “Where Two Rivers Meet”