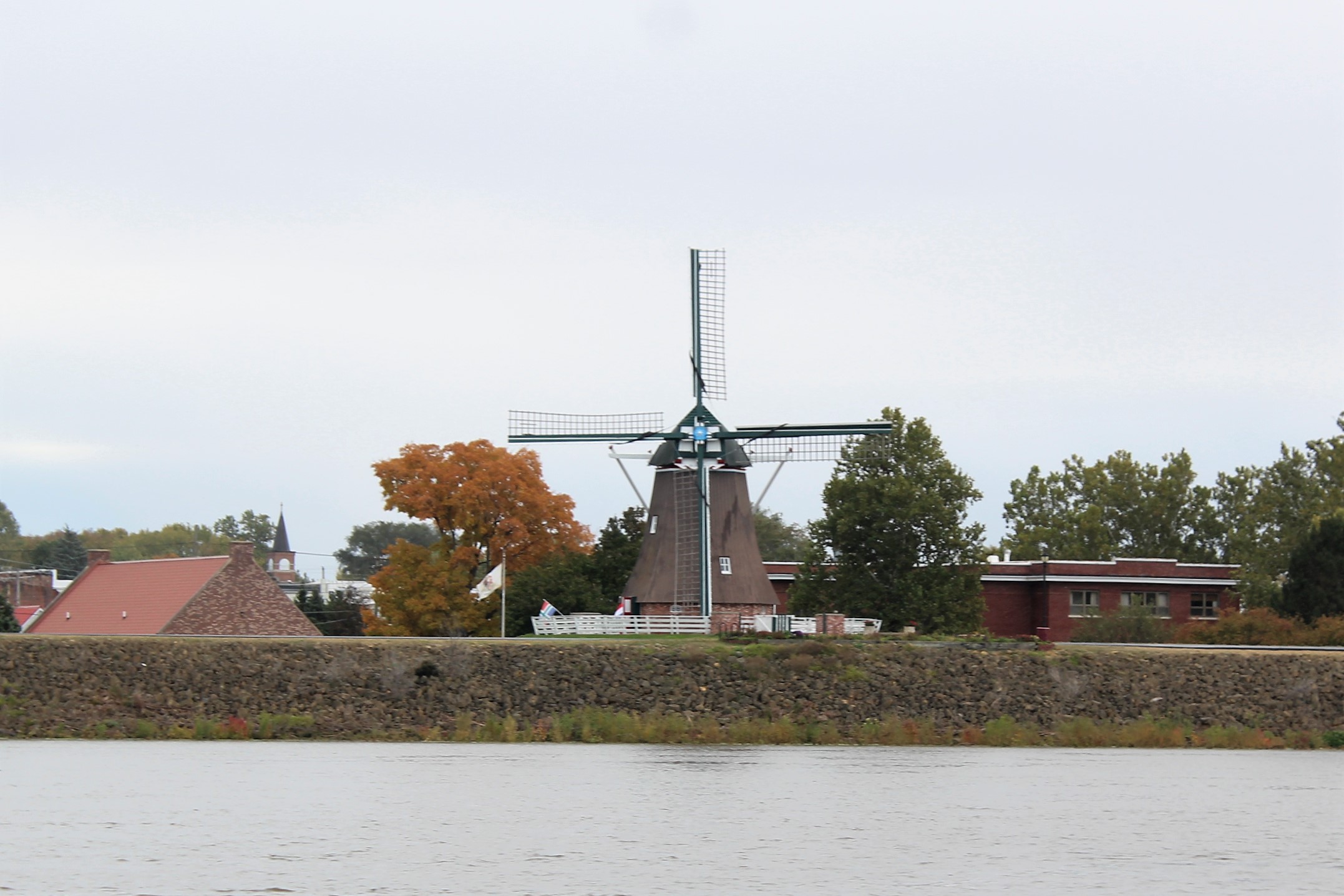 The Fulton “De Immigrant” Windmill was manufactured in the Netherlands, shipped to Fulton, and then assembled by Dutch craftsman.  The windmill is fully functional and connected to a mill that can grind about 1 bushel of grain every 10 minutes.  Well, when the wind is blowing of course.

Mark Twain Quote of the Week

One of the skipper’s all time favorite quotes:

The crew managed to leave Marquette on Tuesday and travel three days making the following stops:

1 – Arrived back in Dubuque on Tuesday

The crew has moved as far south as they possibly can at this time.  Locks 17, 18, 20, 21, and 22 are currently closed due to the flooding along the upper Mississippi River.

This week’s video shows Still Waters II get a reminder that safe boating can turn on a dime and become dangerous in a matter of moments.  This accident took place at Lock & Dam 16, which is the next Lock the crew will pass through.  Enjoy!

With the worst of the cold days behind them and some good weather predicted ahead, the crew set off to make their way south.  They decided to head to Dubuque and spend Wednesday visiting the Mississippi River Museum.

When the skipper opened the hatch to the engine room though, he knew they would be having some delays getting started.  He noticed green water in the bilge, sign of a coolant leak somewhere.  Not the best way to get your day started.

He then noticed liquid along the starboard engine dripping into the bilge.  He traced the green liquid to a hose and found a loose hose clamp.  After tightening the clamp the leak stopped.  The skipper then cleaned the mess up and walked a half mile to a gas station to buy some more coolant.  It took two gallons to fill the system back up.  The skipper started the engine up and headed back down into the engine room to look for more leaks.  Finding none it was way past time to shove off the dock.

The crew made way to Dubuque, but the marina next to the museum was closed because the flood gate had been closed to prevent flooding of the town.  The crew had to take a marina a few miles north of the museum.  Finding the slip that they had been assigned turned out to be a bit of a challenge though.

The marina does not monitor the radio and the skipper could not get anyone to answer the phone either.  The crew finally landed on the gas dock and a young woman showed up to take their money.  However, she did not know where the boat was supposed to dock.  Finally a young man showed up and directed them to a slip.  Ah, the challenges of the boating life. 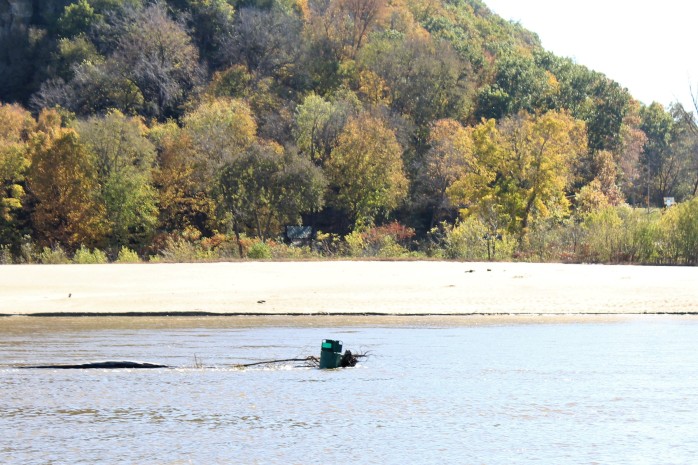 The Admiral had been fighting a head cold for the last several days.  On Wednesday, the skipper also came down with the cold.  Rather than walk in the cold wet weather two miles to the museum, they both passed on the museum, stayed onboard, nursed the illness, and rested up.

This day turned out to be the nicest day in the last two weeks.  Blue sky and sunshine with very little wind.  The crew took advantage of the weather window and moved down river to Sabula, mile 535 on the upper Mississippi River.

Fish Camp along the shore

One of the running jokes on the Loop is Looper Midnight.  After a long day of cruising  Loopers go to bed when it gets dark to rest up for the next days run.  So Looper Midnight just happens to be what ever time the crew turns the lights off and roll into the rack.  With the crew feeling tired from the days cruise and being a little under the weather, Looper Midnight came early.  They did not wait for the sun to set before they hit the sack.

Nice color along the shore 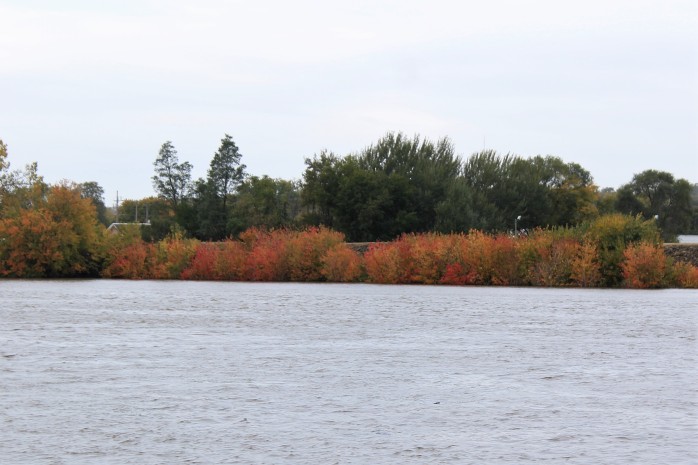 The crew got up feeling much better than the last few days.  All that extra rest must have payed off.  Todays goal was to get through the last three operating locks, 13, 14, and 15.  Then dock before the winds got up too high later in the day.

The crew bypassed Le Claire today and the Buffalo Bill Museum.  Housed in the museum is a wooden paddlewheel towboat named Lone Star.  She was built in 1890 and decommissioned in 1967.  She is also the only surviving example of a wooden hulled steamer that plowed the Mississippi River. 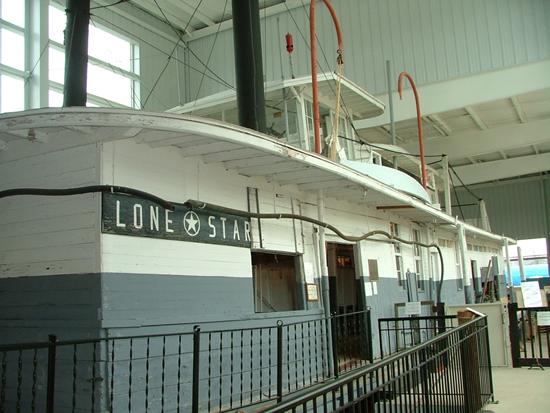 The locks went well with no delays.  However, the wind kicked up near 15 mph a little after the noon hour, making the last two locks more challenging than need be.  By the time the crew arrived at the marina, the winds had climbed up to 17 mph.  The crew was glad that the marina is inside a basin which is well protected from the wind.  The forecast is for the winds to continue to build during the night and blow 20-25 mph all day Saturday. 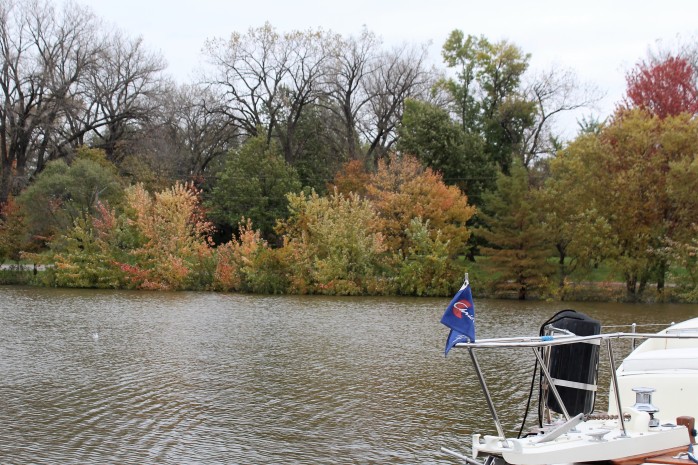 One last bit of excitement to end the week.  While watching some TV last night, the crew began to hear some strange noise every so often in the helm.  Almost sounded as if someone was walking around up in the helm.  The skipper grabbed a flashlight and shown the light out the back door onto the sunporch.  While he was looking around a large coon ran down from the helm and jumped off the boat.  He came back a couple of more times before he decided to go explore on the boat two slips down.  In fact, he went to the Boat Name of the Week boat and crawled around awhile in their cockpit.

Fitting name while the crew sit and wait for the Locks to re-open.

Lock 16 was re-opened on Thursday but may reclose if water rises above 17 feet.  Currently the river level is projected to crest at Lock 16 on Sunday at 16.9 feet.  There are not marina facilities between Lock 16 and 17 so the crew will remain put until after both Locks 16 and 17 are open.

Looking at the river water levels downstream, it appears that the key lock to monitor is number 17 near New Boston, IL.  Water at Lock 17 needs to fall below 18 feet before it can re-open.  Currently the river level is 19.9.  The level is predicted to remain at that level through Tuesday, and then begin to recede.  The water does not fall below 18 feet until late Wednesday or early Thursday. 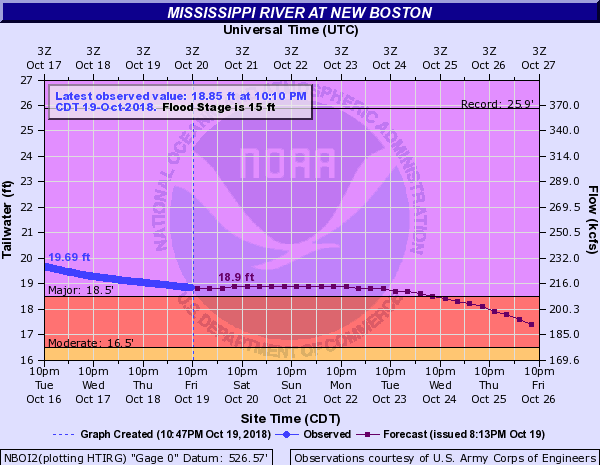 The other closed locks look as though they will return to service prior to October 25th.  So, maybe next week, once Locks 16 and 17 are open, the crew can resume their push south in search of warmer weather.

One, not so interesting note is that the marinas in this area, mile 480, all have end of season closing dates of October 31.  The marinas in Alton and Grafton, Mile 218, remain open year round.  So the crew will only have a few days to make the 260 miles south to find marina amenities along the route.

Another, not so interesting fact is that there was snow in Madison, Wisconsin during the Badger football game on Saturday.  Madison is only 175 miles north of the boat.  This might be cutting it just a little to close for the crew who are more used to the southern comforts of Texas autumns.

← Patience? Are You Kidd’n Me?
Set Sail from Sunset →

4 Comments on “Maybe Next Week”