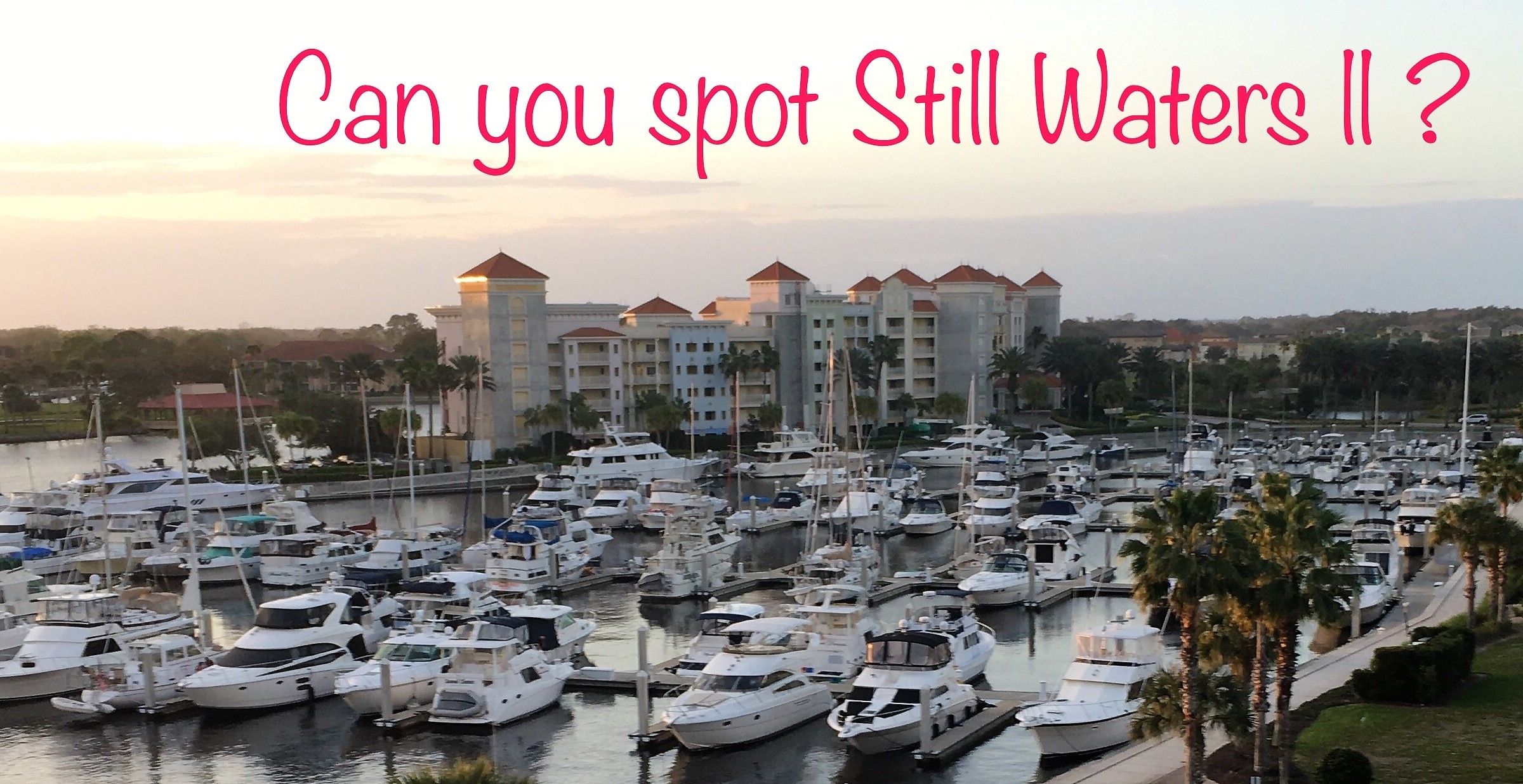 The crew only made two short runs this past week to land at their destination at Hammock Beach Marina.  They travelled on Monday to anchor in Daytona Beach.  Then moved further north on Tuesday to Palm Coast. 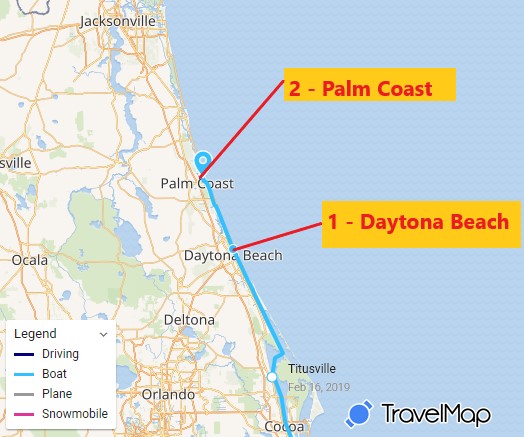 Click here to read the day-to-day travel log. This includes weather report, sea conditions, captain’s log, a summary of the day’s experience, and a few pics of the route.
The voyage of discovery did answer the following questions this week:

The crew thought about extending their stay in Titusville to watch a rocket launch from Space View Park next to the marina.  However, NASA rescheduled the launch to Thursday, so the crew slipped the lines off and headed towards Daytona Beach.

The crew would cruise thru Haulover Canal with anticipation of seeing some manatees in the canal.  The anticipation grew as they approached the canal that connects the Indian River with Mosquito Lagoon.

Looking down the canal to Mosquito Lagoon 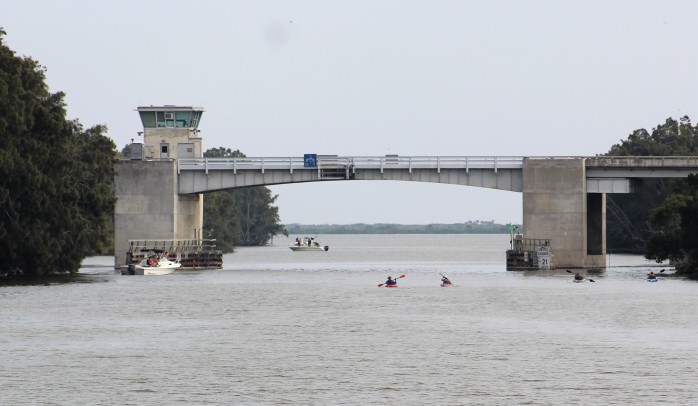 The anticipation did not disappoint as the crew counted 13 manatees in the canal.  They saw signs of others swimming under the water as evidenced by the swirl caused by their tails as they swim just below the surface.

That dark hump is a manatee swimming nearby 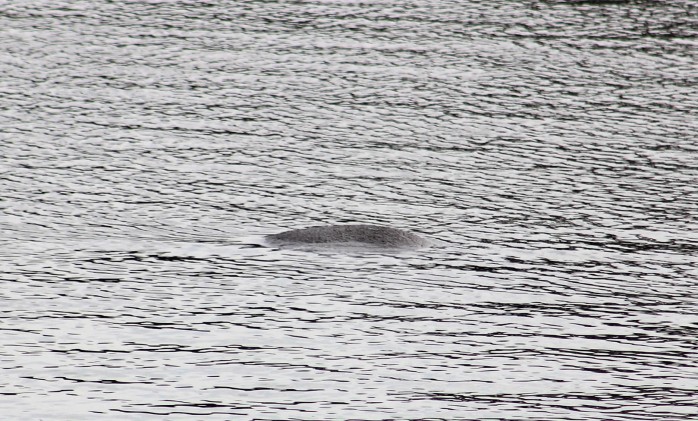 A better picture taken in the canal back in 2018

The Haulover Canal got the skipper wondering how the canal became known as Haulover, so he began to search for the answer.  Rather than being named for some famous person, the canal was actually named for the act of early Native Americans hauling their canoes over the narrow piece of land.  The first canal was dug in 1852, and was 3 feet deep by 14 feet wide.  The Intracoastal Waterway incorporated the Haulover Canal as part of the ICW project in 1927.  The US Army Corps of Engineers maintains the canal that was added to the National Register of Historic Places on December 19, 1978.

Nine boats just around this bridge, what is going on here?

While nearing New Smyrna Beach, the boat traffic began to build up on the water.  Seemed to be way more traffic than expected for a Monday afternoon.  Well, until the skipper remembered it was President’s Day and these people were all off work today because of the holiday.

While not a president, the crew found it interesting that someone was flying this flag off their dock on President’s Day.

After an uneventful night swinging on the hook in Daytona Beach, the crew weighed anchor and headed north towards Palm Coast.  The run was a short 25 miles that seemed as though it took for ever.  Between manatee slow speed areas and homeowners having Coast Guard approved no wake signs posted, it was a slow go.

One interesting thing about this area is that the homes are all built on the barrier island side of the ICW.  The back of the homes look out over the ICW and into swamp land.  They have good views of ‘Old Florida’ that probably will not be lost to development because of the swamp land.  Well, at least not anytime soon. 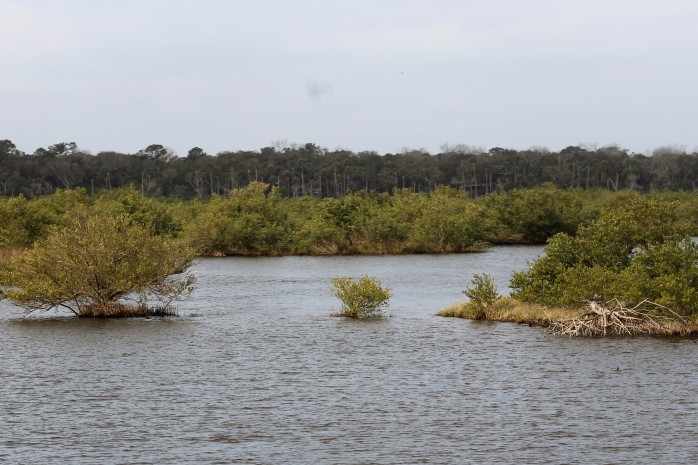 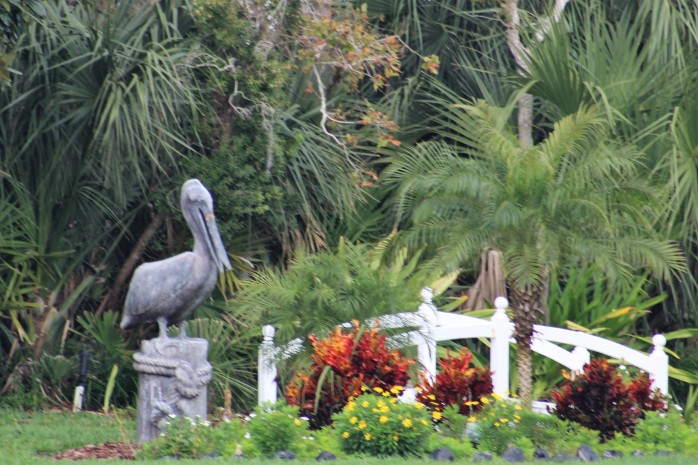 After what seemed to be all day, the skipper finally spotted the bridge that marked the entrance to the Hammock Beach Marina in Palm Coast.  The crew will hang out here and enjoy the area for the next month and resume travel north mid-March.

Home for the next month

Beth and Art have left the cold weather of Colorado Springs to enjoy a few weeks in the mild winter of South West Florida.  Today, they drove over to the First Coast of Florida to spend a few days with the crew.

Last year when Beth and Art visited, the boat was in the boatyard getting some work complete so they did not get a chance to go out on a cruise.  Today, there were storm clouds brewing but the skipper thought it would still be a good day to go out for a short day cruise.

Beth and Art with a few storm clouds 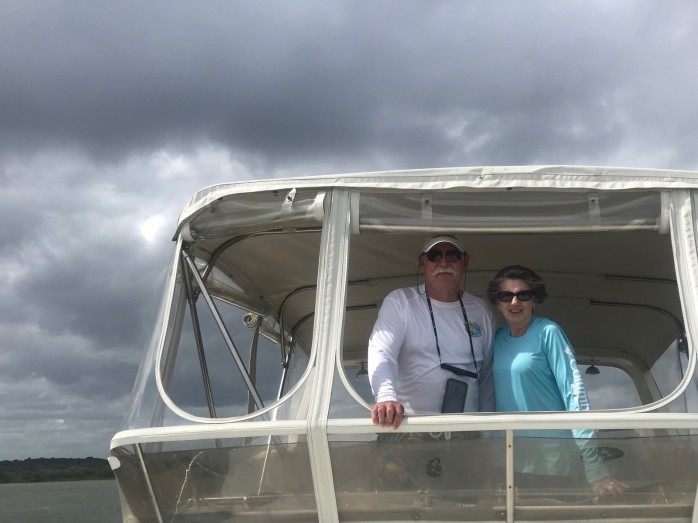 Beth and Art with Fort Matanzas in the background

That might look like a little fort but she was very effective.  Built in 1742 by the Spanish to protect the backdoor entry to St Augustine just 25 miles north.  In 1740, James Oglethorpe used the Matanzas Inlet to block St Augustine and start a thirty-nine day siege.

The Spanish decided to build the fort to prevent another siege by the British.  Soldiers from St Augustine would come down to Fort Matanzas for regular duty.  Then return to the main garrison at St Augustine.  Upon completion, the Fort had one officer and four infantrymen to operate the five cannons strategically placed to pound the inlet a half mile away.

The British did try once again to enter the inlet with 12 ships, but the small Fort cannon fire drove the ships back into the Atlantic Ocean.  The Fort had done its job.  The cannons would never fire on an enemy ship again.

Beth and Art enjoying the ride back to the marina

Beth on the Sundeck

After returning to the marina, the group headed down the road to a local seafood restaurant to test the waters.  Turned out to be a good place to eat.  The service was quick and the food was good.  The band was pretty good also.

After sitting around and chatting for most of the morning, Beth and Art needed to get back to the west coast to get ready for the weekend planned activities around Ft Myers.

It was a short but fun packed visit on the east coast.

Scuttlebutt along the waterway says this 100 foot girl belongs to the estate of Dale Earnhardt SR.  The crew saw the vessel while in Daytona Beach on Monday following the big race.

The crew will hang in Hammock Beach Marina for about a month.  Then start moving again about mid-March to make way to Norfolk.