The skipper wrote a little poem to welcome everybody back on board for the Down East Loop.

We had a few new folks come aboard in New York City to join the virtual crew by following the blog. Welcome Aboard: Jake A., Lori D, and Rob W.

The skipper is no Walt Whitman, but the crew discovered this poem (written by Walt) carved in rock at the Bear Mountain Zoo. Who knew, Walt knew, that you were coming aboard and wrote this poem just for you.

The crew travelled from Atlantic City to New York City on Wednesday to anchor by Ellis Island. On Thursday, they headed up the Hudson River and anchored in Haverstraw Cove.  Then on Friday they moved up the Hudson to Bear Mountain to spend the Memorial Day weekend.

1 Who is buried in Grant’s Tomb?
2 Where was George Washington’s first victory after retreating from New York City?
3 Who is credited as America’s first international author, and what is the name of his home?

Normally, the crew would consider a weather window of less than 10 mph winds and less than 2-foot waves as favorable to run out in the Atlantic Ocean.

Today’s forecast was for winds less than 5 mph and waves less than 1 foot. Based on the forecast, the crew decided to leave at first light, about 0530, and try to make a 100-mile run all the way to New York City. The weather did not disappoint. The sea conditions were practically perfect all the day long.

After a long 8 hours running 3 miles off shore, the crew finally caught a glimpse of the New York Skyline in the distance as they approached Sandy Hook. However, it would be another three hours before the crew passed under the Verranzo Narrows Bridge and entered the upper Hudson Bay.

Then another hour and the crew arrived at Lady Liberty. The advantage of arriving after 1800 was that the tour boats had all closed for the day so there was no competition trying to get a good picture of The Statue of Liberty. 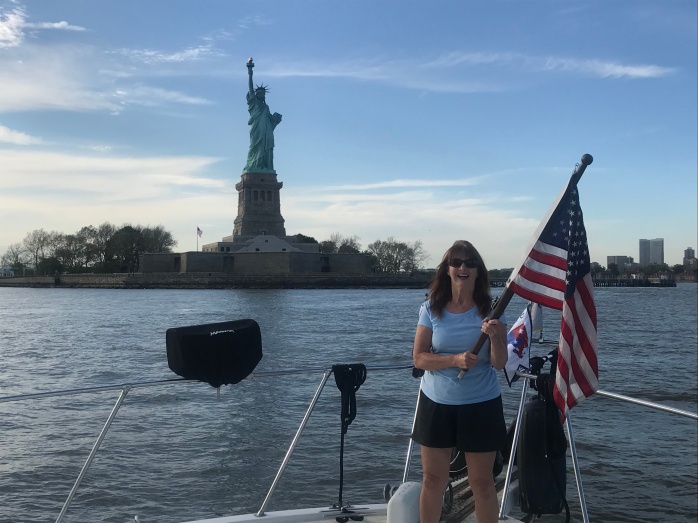 After taking advantage of the photo op at the statue, the crew motored into the anchorage behind the statue. Unfortunately, the anchorage already held eight other boats and there was not much room for Still Waters II. The crew tried to set the anchor in the one spot that was left. But it became clear pretty quickly why that spot was still available. The anchor would not set because of weeds and grass fouling the anchor.
The crew decided to go around and anchor beside Ellis Island and enjoy the night skyline of lower Manhattan. The skipper had to weave his way through a sailboat race, but finally managed his way into the anchor area.

As expected, it was very rolly as the water taxi wakes continued to create havoc on the boat until after dark. But in the end, the view was worth the trouble. 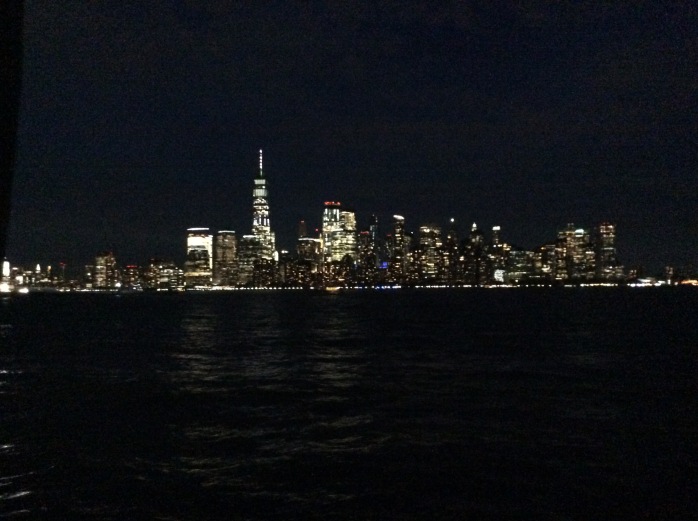 The crew spent a rolly night on the hook. Hope none of the virtual crew members got seasick as you regained your sea legs on day 1 of the voyage.

The skipper decided the best time to weigh anchor was about 0900 so they could ride the current on the Hudson River. The water taxis were busy plowing thru the water causing the normal washing machine effect as the crew headed north up the Hudson River along Manhattan Island.

Fleet Week started on Wednesday so there were 15 Naval Targets docked in various locations around Manhattan. 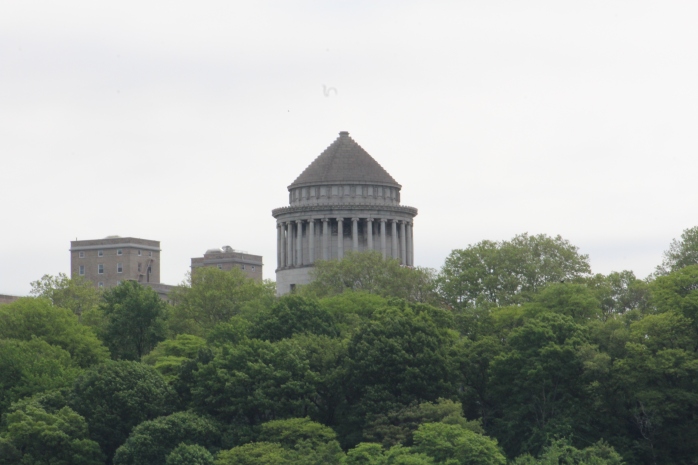 So, the skipper encouraged them to try again. He also provided a hint, the key word in the riddle is ‘buried.’ The oldest granddaughter got on the internet and announced it was Ulysses S. Grant and his wife. Where upon the skipper said, “yes they are in the tomb but are not BURIED in the tomb, so the proper answer is Nobody.”

The skipper ended his dialog with the G’kids with, “This concludes both your history lesson and grammar lessons for the day. You are welcome. That skipper, always splitting hairs of little words like buried.

As the crew went past the north end of Manhattan Island, they set their sites on the Dutch villages of Sleepy Hollow and Tarrytown, just past the Tappan zee Bridge. 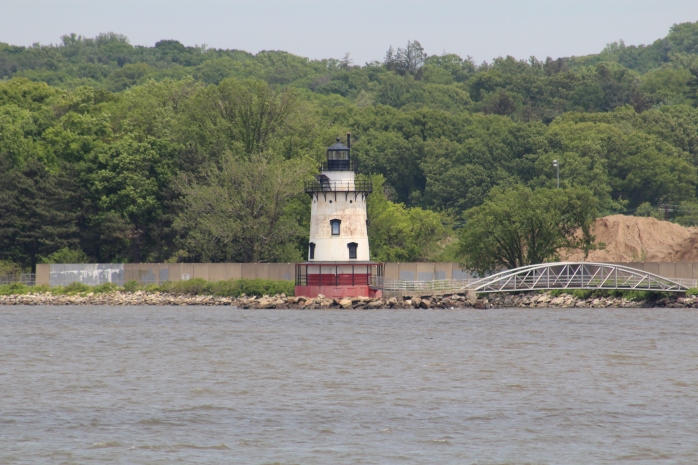 One of the more famous characters from this region is Ichabod Crane from the Headless Horseman story by Washington Irving. The Sunnyside resident was America’s first international author and his home is visible from the water. 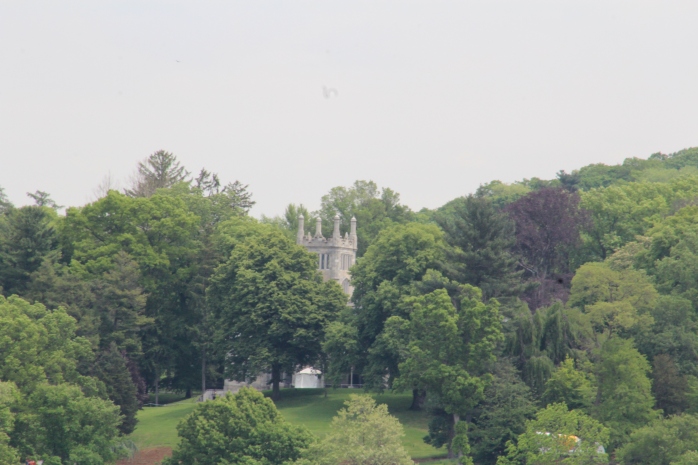 The crew continued on up the Hudson River Valley and dropped anchor in Haverstraw Cove. The skipper readied the dinghy and the crew went ashore for a cultural shock in the Village of Haverstraw.

Not sure what the crew was expecting, but a Latino town was certainly not the picture they had. The crew walked about three short small blocks before turning around. In those few steps, they saw no less than 10 Barber Shops and 6 small grocery stores. Folks were sitting and standing around watching the gringos walk around town.
They stopped in one small store and bought cokes and cheese. While inside, a man blocked the skippers exit from an area in the back of the store. Thinking fast, the skipper reached for a door on a refrigerated unit, opened the door, reached in while saying excuse me and nabbed a coke. The man stepped aside and the skipper brushed by the guy as he headed for the cash register by the front door. Strange, strange indeed.
After paying, the crew made way back to the mother ship just as a down pour started. The stormy night was just getting started.

The crew turned in at 2100 once there was no visible light for what Looper’s joke as Looper midnight. Unfortunately, at midnight the crew heard a bump in the night. Then another bump. The skipper hopped out of bed and looked out to see a boat pulling away. Once the boat moved, the skipper noticed that they had drug anchor and were only 20 yards from shore.

He ran up into the helm, fired up the engines, turned the helm over to the Admiral, and went out to the bow to raise the anchor in the howling wind and rain. After getting the anchor up, the crew spent the next hour unsuccessfully trying to reset the anchor. And then suddenly, the wind and rain stopped and it was once again flat calm. Just like that.

The crew set the anchor and the skipper checked the radar to discover several more waves of storms in their future. The skipper spent the night in the helm while the Admiral slept on the couch in the salon. Luckily, they did not drag anchor for the rest of the night. The other boat in the anchorage was not as fortunate. He drug three more times before sunrise. Then three more times before 0800. Even though the winds were in the high teens with gusts over 20, he elected to leave and try his hand somewhere else.

Around 0900, the gusts reached 30 mph and the gravel bottom just did not provide the holding necessary for those winds speeds and Still Waters II began to drag anchor again. That was it for the skipper, he had had enough, weighed anchor and also left.
With the winds out of the northwest, the skipper hugged the western shore of the Hudson River and headed north towards Bear Mountain State Park.

While headed north they passed the Stoney Point Lighthouse. Stoney point once housed a Fort controlled by the British. When George Washington retreated from New York City, he headed north up the Hudson River and attacked the Fort. The Patriots lost 15 men in the fight but managed to take the Fort. The battle had little significance in the outcome of the war, but it did provide a huge morale boost for the Patriots after they had to retreat from New York City.

Upon arrival at Bear Mountain, the crew decided to attempt to land on the old Ferry Dock. After scoping it out the crew managed to get a line over on the south side of the dock and get lines down to hold them fast.

The winds were predicted to fall off late in the afternoon, so the crew decided to get off the boat and go exploring. They stumbled onto the Bear Mountain Zoo, who knew? 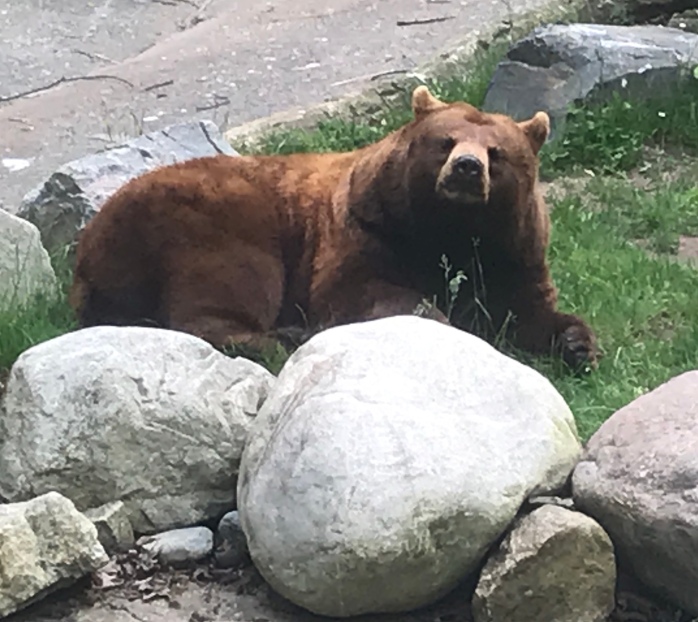 They took the trail thru the zoo and discovered a couple of Bears. Fitting to find Bears in Bear Mountain Zoo. There were several other exhibits with animals, but the best exhibit was a sign along the trail. 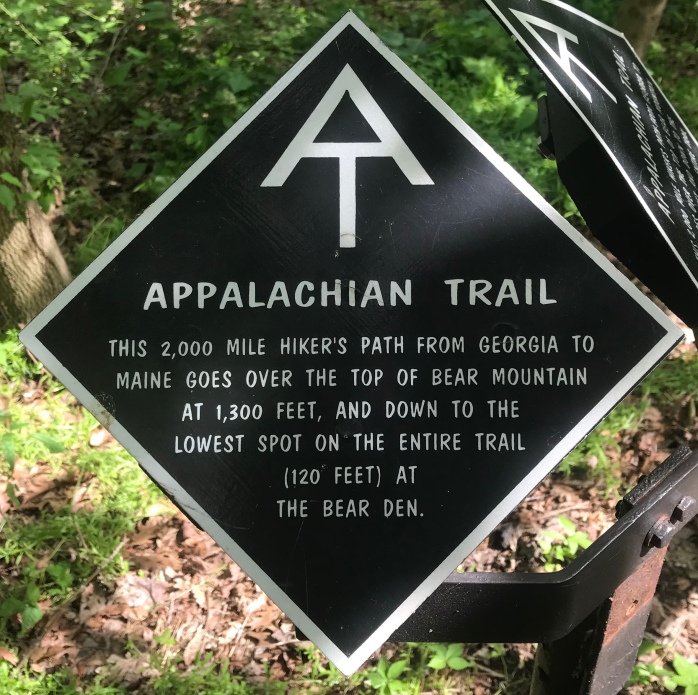 That is a good sign, but not the one I am about to talk about.

All along the trail were small signs explaining the different types of trees and shrubs along the path.  As well as other factoids.  Then they came up to this sign and it explained that the utility pole was made of white pine. The skipper thought that the timing was perfect, especially since his Dad was an outdoor enthusiast, lineman by trade, and it just happened to be his birthday.

The crew decided to tackle the Bear Mountain portion of the Appalachian Trail, about a 2-mile hike with 1,000 foot of elevation gain.

The trail monitors have spent the last 14 years cutting a new trail to the top of Bear Mountain. Cutting thru rocks and laying over 1,000 steps along the trail path. The new section opened in 2018. 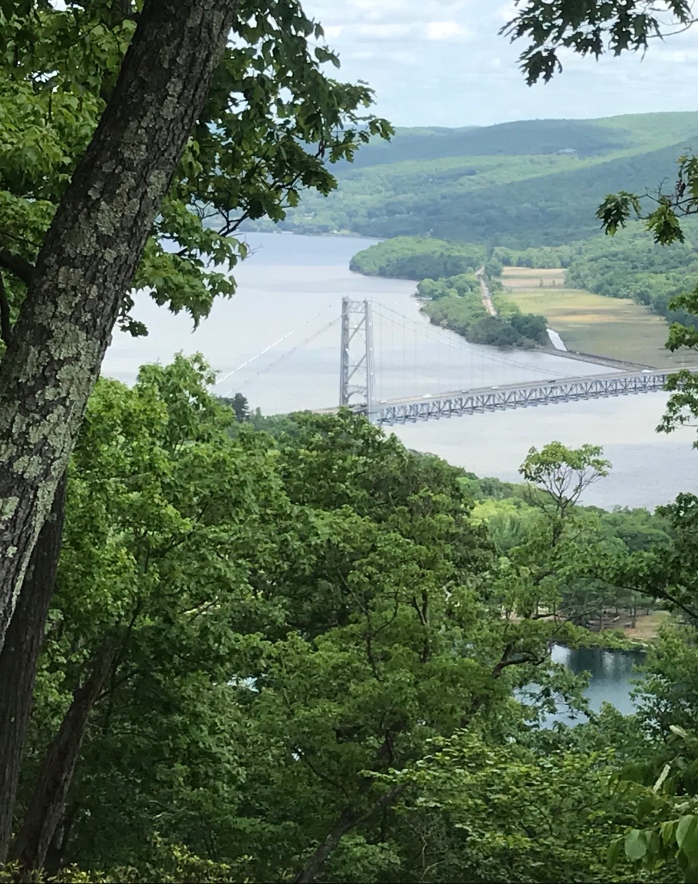 The reward for making it to the top was an unobstructed 360-degree view from the Perkins Observation Tower that sits atop Bear Mountain. 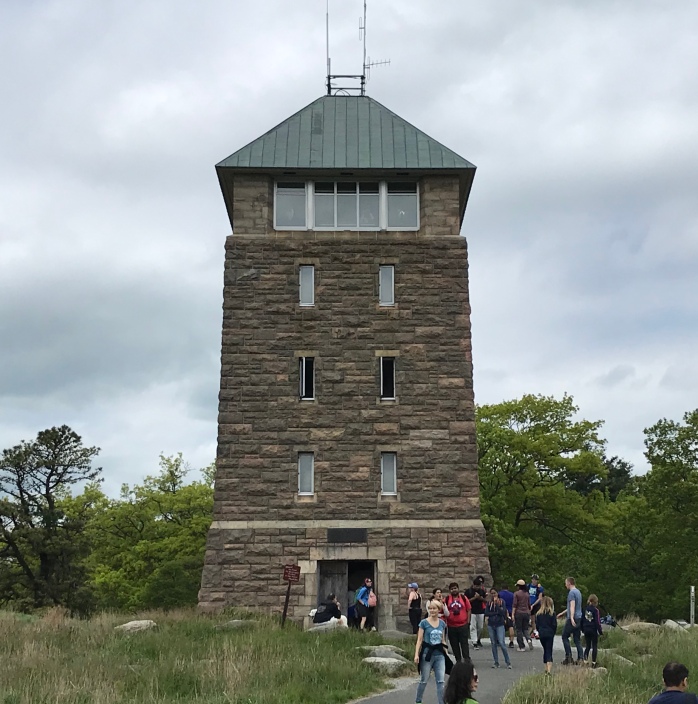 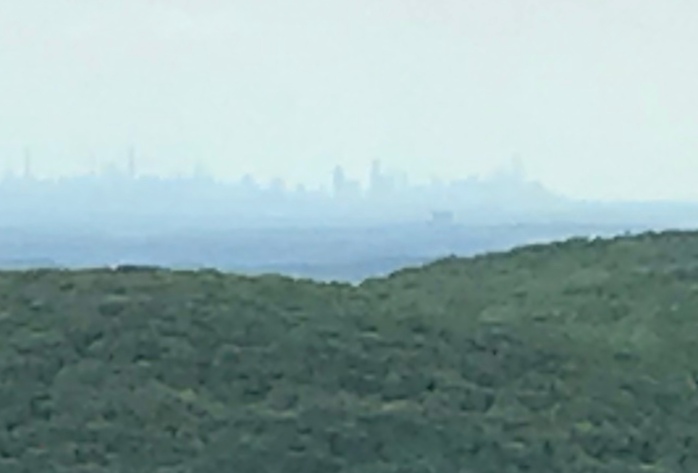 Someday the skipper hopes to thru hike the Appalachian Trail from Springer Mountain in Georgia all the way to Maine. While walking thru the zoo though, the skipper was answering some questions about the trail to a young couple in the zoo with their kids. The skipper mentioned his dream of hiking the trail someday and the women said, “you better get started.” The skipper turned towards the Admiral and commented, “I think this young lady just said I am old.” She quickly countered, “Oh no, I did not say you were old, I said you should start soon.” Everyone got a good belly laugh from that line.

The Erie Canal System was scheduled to open May 17th.  Due to flooding issues, the Canal has been slow to fully open.  The Champlain Canal has yet to open, and there is no estimated opening as of this writing.  The crew will move the boat to Poughkeepsie on Monday, then take a shore excursion to Oklahoma City to watch the NCAA Women’s World Series of Softball.  Maybe the Champlain Canal will be open when they return and they can continue the Down East Loop.

← Down East Loop
Onward and Upward →