Eric here catching you up to date on the travels of Still Waters II.

After a whirlwind driving tour to Texas and back to Trenton, Ontario, our crew took a couple of days to unwind and prep for the next leg of the journey.  On Friday, July 15, 2016 the crew finally left the marina and headed under the bridge to start the Trent-Severn Waterway.

Friday the crew needed to take on fuel and pump out the holding tanks before setting sail, so they pulled over to the town dock and took care of business.  Afterwards the skipper pulled out into the channel and took a couple of pics to mark the start of the Trent-Severn.

The Trent-Severn Waterway is another ‘World-Class Boating Adventure.’  After 87 years of construction, the final link was completed in 1920.  This allowed a fully navigable water system from Trent, Ontario to Port Severn, Ontario on the Georgian Bay.  The 386 km (241 miles) waterway consists of 40 locks, 31 miles of manmade canals, and about 150 dams.  The 40 locks include 36 conventional locks, 2 flight locks, 2 lift locks, and 1 marine railway.  The Peterborough Lift Lock is the highest hydraulic lift lock in the world, 65-foot vertical lift.  The Kirkfield lift lock is the second highest hydraulic lift lock in North America, 49 feet. The marine railway will raise and lower vessels over land for a total lift of 58 vertical feet.  There will be much to see and do on the Trent Severn.

The crew only went 8 miles on the first day.  They passed through 6 conventional locks that raised the boat a total of 116 feet.  The wind was playing havoc on piloting the boat in the narrow locks.  One time a gust caught the stern of the boat and pushed it towards the mooring wall.  The skipper had to do a 360 rotation to get back under control prior to entering the lock.  Never a dull moment on Still Waters II.

At the Frankford Lock there was an information board about building the locks in this area.  The labor was completed by Irish immigrants using picks and shovels.  They worked ten hours a day, six days a week, and were paid a whole $1.75 a day for the effort.  The skipper thinks they were well under-paid by the looks of the granite rock that is beginning to surround most of the area.

The Locks are all kept very nice, manicured, and flowers seem to be everywhere.

Saturday, with only a short run of 18 miles today, the skipper decided to take a late start. The crew shoved off about 1100 and made the first of three locks at 1230.  The Skipper Bob Publication discusses an ice cream store near the lock so the skipper inquired how far a walk it might be to procure some ice cream.  The lockmaster pointed across the water and said it was in the one and only store.  After clearing the lock, the crew swung the boat around and docked.  The ice cream turned out to be the best cream at the best price so far on the loop.  Three BIG scoops of ice cream for only $5 Canadian (~$4.00).

The lady of the store is a large collector of M&M stuff.  She mentioned that her collection was now well over 1,000 pieces.  One piece that was proudly on display in the store was a Kyle Busch racing helmet.

After finishing off the ice cream the crew headed back up the river to completed the next two locks.

While crossing a small lake, the skipper noticed a ski boat throwing a huge wake.  The bow was pointed nose up with the stern of the boat plowing into the water.  Behind the boat was a guy on a surf board.  He was holding a rope, but the rope was slack.  He was actually staying with the boat by riding the wave.   He eventually let go of the rope and was doing 360 turns and crossing back and forth over the wake behind the boat.

After stopping at Lock 9, the crew took a 1 mile hike back to Lock 8 on the Centennial Trail.  The trail needs a little maintenance but it was a good hike. 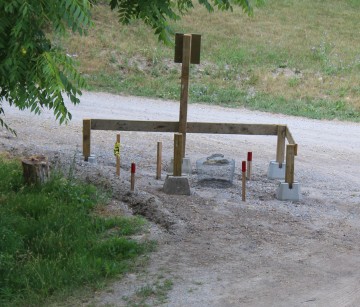 After arriving back at lock 8, the Lockmaster showed the crew a snapping turtle nesting site.  He said the eggs should hatch sometime the first part of September. 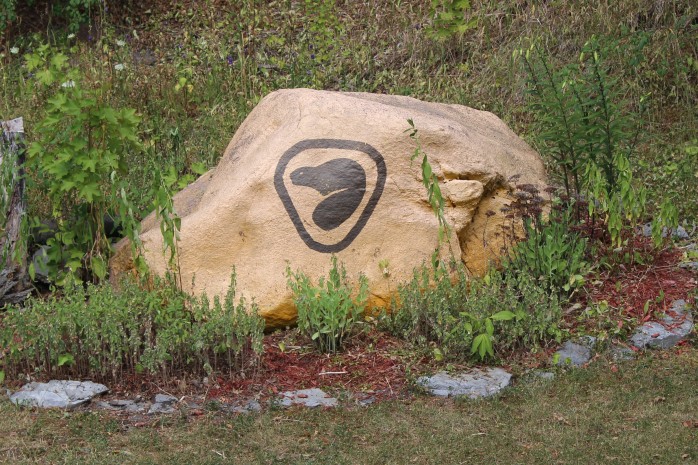 Upon hiking back to Lock 9, the crew found that they would be the only boat along the wall tonight.  A lovely peaceful night on the water.

The crew will spend next week making their way to the famed Peterborough Lift Lock where they will take a 65 foot lift in a large bathtub.  Come back next week to see how the adventure continues to unfold.