Summary of the Week

The work on the boat finished up just before closing time on Friday.  Thanks-a-Million to James for herding those cats and getting the work complete while everyone else was thinking ‘three day weekend.’

1- The crew made way on Saturday and anchored off Cumberland Island.

2- On Sunday, the crew fought the weather most of the day and arrived at Brunswick Landing Marina.

It is always interesting how streaks get started.  Many times they just happen without any thought.  As it is with this streak.  The crew had breakfast at the Metro Diner to say goodbye to the Ortega River for the third year in a row.

In 2016, they decided to go over to the Metro to celebrate the launch of their Gold Loop Adventure.

In 2017, Glenda and Rob joined the crew at the Metro to see them off for their Maine Adventure.

In 2018, Lynn and Wayne joined the crew to see them off for their Platinum Adventure.

Wayne and Lynn at the Metro Diner

After breakfast, it was back to the boat to take on fuel and pump out the holding tanks.  By 1030, all the tasks were done and the crew finally shoved off.

After 50 day’s at Lamb’s, glad to shove off the fuel dock and leave a hole under this awning.

The crew originally had planned to stop at the Jax Free Dock.  However, because they made such good time, they decided to push on to Cumberland Island, another 25 miles.

The Marina Mile on the Ortega River, with Jacksonville in the background. 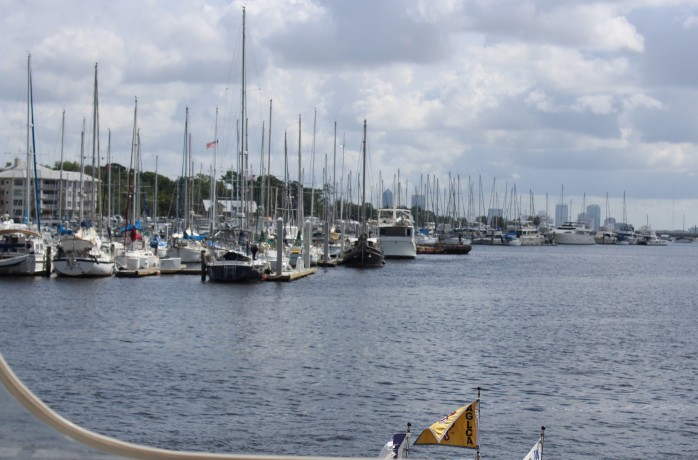 Unfortunatly, just minutes after the crew passed the Free Dock, the water under the boat disappeared.  The skipper had adjusted the readout for depth to show actual depth from the bottom of the props.  He also set the alarm at four feet.  When the alarm sounded, the skipper reached over to silence the alarm and pull back the throttles to slow down.  Just as he got the throttles in neutral, the depth had gone from 4, to less than one foot.  Then the depth went to 0.0 and then blanked out.  The boat continued to drift forward.  The boat made slight contact with the mud bottom but drifted over the shoal and back into four feet of water under the prop.

On the brighter side, the crew saw many of these faint pink birds today, Roseate Spoonbills

The crew continued on to Cumberland Island and anchored for the night.  The skipper did dive down to the prop, but could not detect any damage.  He ran his hand around all the blades and felt nothing abnormal.  Oh well, will have to go to a repair facility and get her checked out.

Looking port from the sundeck while anchored.

The crew woke to the storms caused by Tropical Storm Alberto.  After the first wave of rain stopped, the crew weighed anchor and limped forward on one engine towards Brunswick.  With the rain and clouds, there was not much to see, including the markers that were hard to find in the reduced visibility. 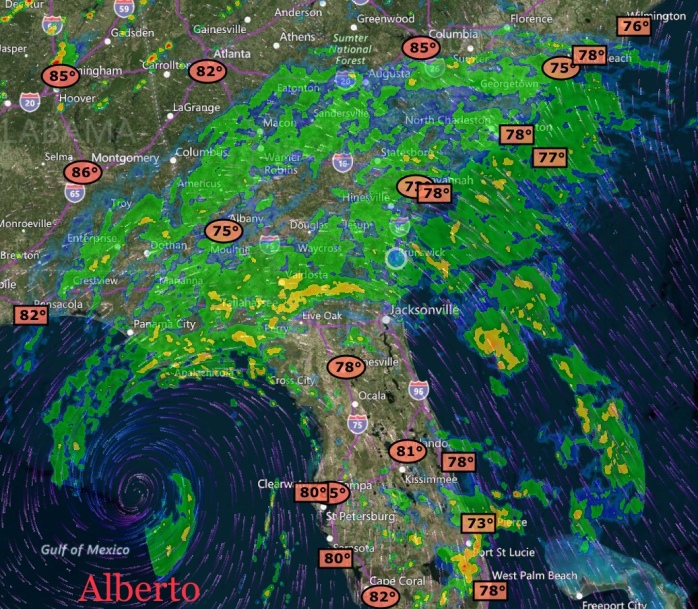 When the crew arrived at Jekyll Creek, it was obvious it was low tide.  Again, this is not good.  Jekyll Creek is notorious for having shallow water.  Luckily, a boat passed Still Waters II just as they entered the Creek.  The skipper radioed the boat and asked the captain what his draft was.  The captain claimed he was 3′ 9 ” just like Still Waters II. 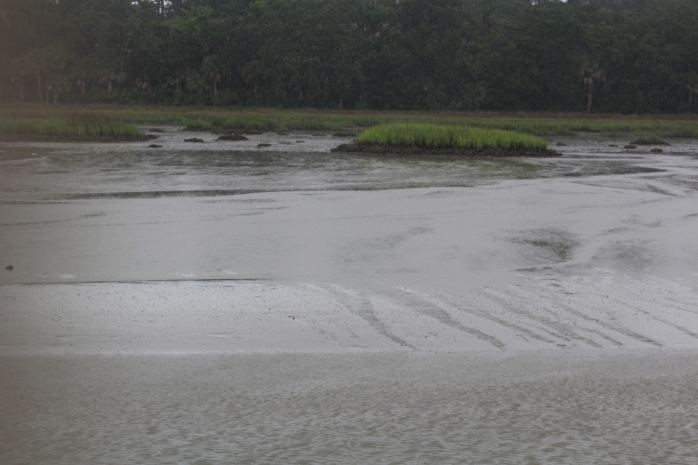 The skipper tucked in behind the boat and decided to keep a safe distance but close enough to see how he negotiated the Creek.  For 3.4 miles, the Creek was carrying less than 1 foot of water between the bottom of the prop and the mud bottom.  The skipper decided to run on the Starboard engine in this section.  His thinking, if you are going to hit something here, might as well hit it with the bad prop.

Both boats managed to navigate the waters without hitting bottom.  It was a slow and intense hour of boating though.  Ain’t boatting fun!

After clearing the creek, it was not much further to Brunswick Landing.  The good news for the Admiral though was just about the time they arrived to dock, the rains let up.  It was a light sprinkle, but that sure beats the down pours that fell for most of the day.

The crew hopes that the starboard vibration is an easy repair.  Best case, the prop has damage.  The crew has a spare prop, so if the repair yard has availability, they could swap the prop Tuesday.  The crew would then continue north on Wednesday.  If it is not the prop, then who knows how long the crew wouldbe here.  Might start an early sabbatical to the just started adventure.  Time will tell.  Tune in next week to see how things turn out.

Loop On – Where the road ends, the water begins.  The water goes on forever and the adventure never ends.

Wayne and Lynn, thanks for the great times and memories during the last week, especially visiting Woodpeckers BBQ and Driftwood Beach.

← Eternal Rest
On The Water Again →