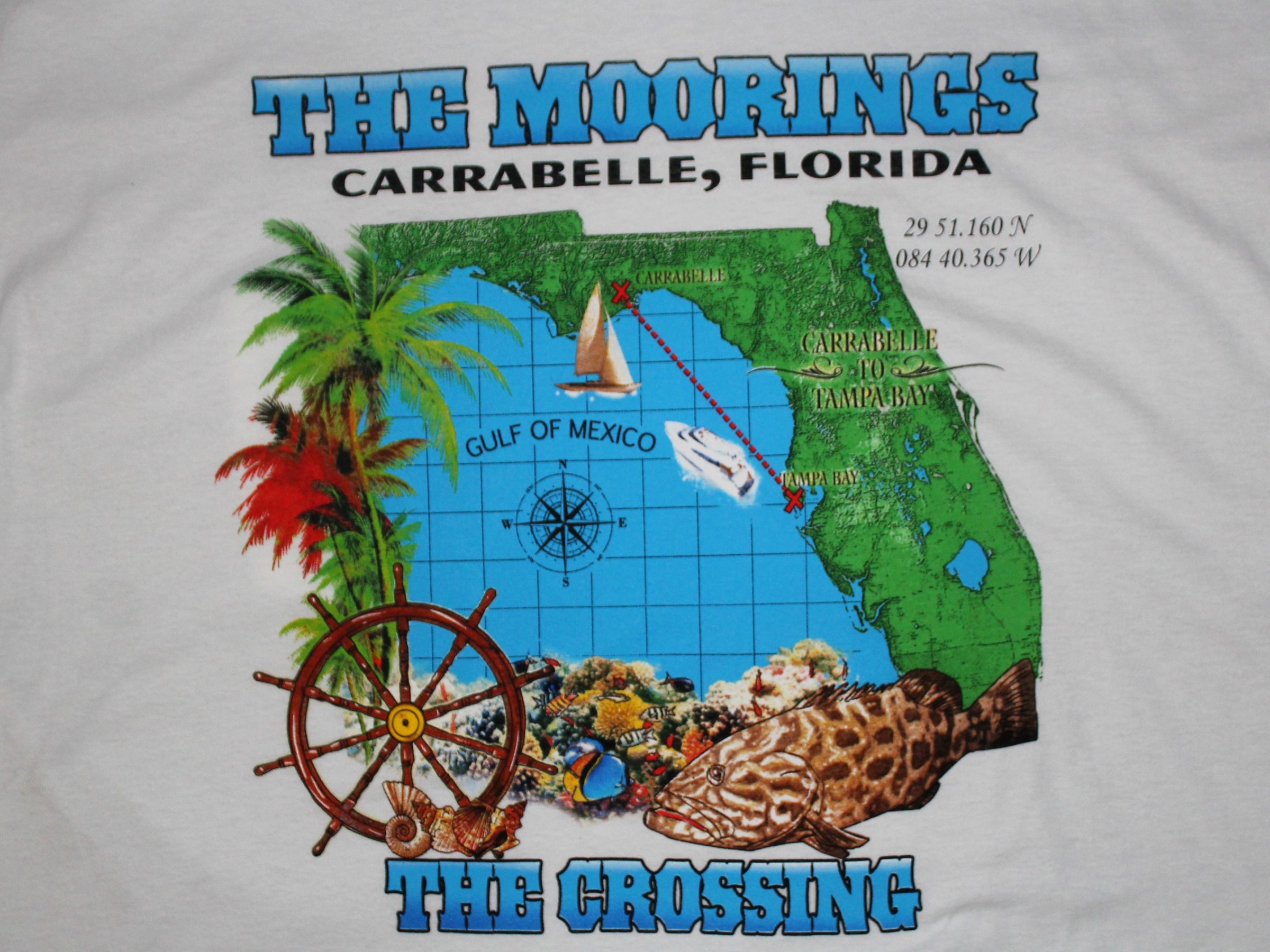 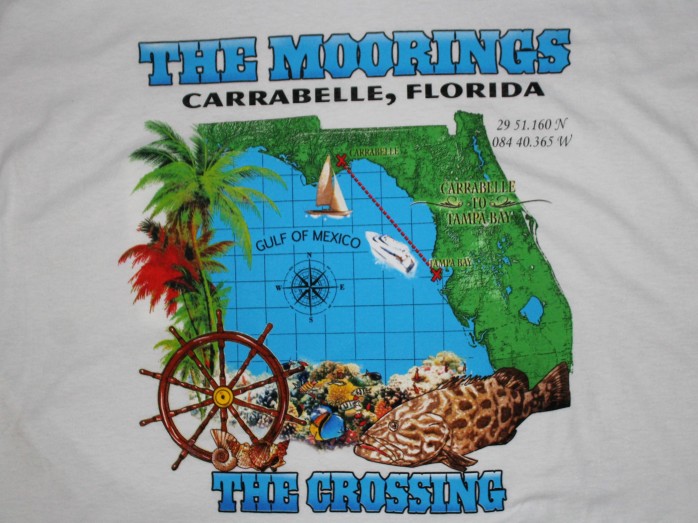 John and Lou Ann J. have come aboard as our latest virtual crew members.  They are family of Dan and Mary of the Gammel Dansk.  Also, indianeskitchin has come aboard.  Welcome Aboard! 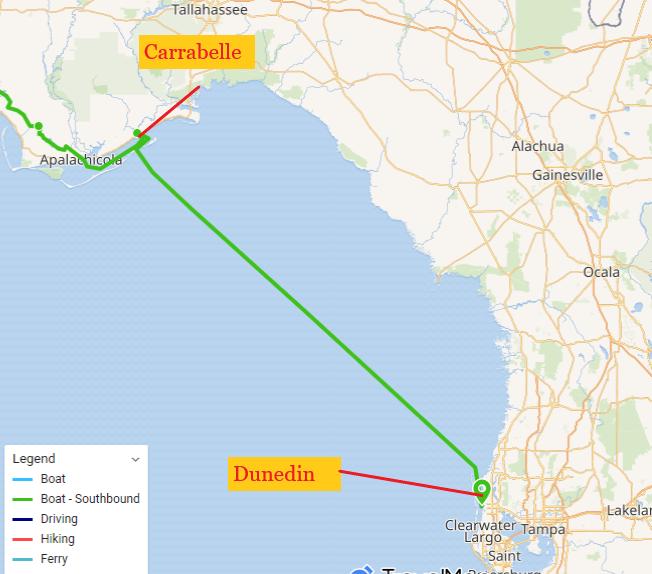 The weather window for a Tuesday/Wednesday Gulf crossing held.  The crew left Carrabelle at noon on Tuesday and managed to make it across the Gulf.  They docked at Marker 1 Marina in Dunedin at 1515 on Thursday.

This week’s video shows Still Waters II as she makes way across the Gulf of Mexico to the western shore of Florida. Enjoy!

The skipper checked his weather apps as soon as he woke up to determine if today would be the day to cross the Gulf.  The weather apps were in agreement and looked favorable for a good crossing. The skipper was looking for winds under 10 mph and waves less than 2 feet.  Tuesday looked really good with winds light (under 5 mph) most of the day.  The wind was predicted to pick up after midnight, but with the direction out of the east, the waves should not build too quickly and the fetch would shorten the closer the crew came to shore. 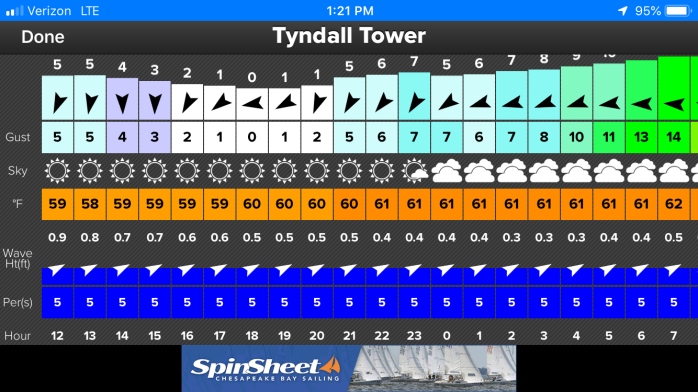 The skipper then checked Eddy’s Weather Wag to see what he had to say about a Tuesday/Wednesday crossing:

It’s a great day for Go-Fast Loopers to burn some serious fossil fuel.  Sea conditions should stay very favorable for your entire journey.

Those who are doing the overnight crossing will have very favorable sea conditions throughout most of the night.  As winds pick up slightly in the pre-dawn hours, the seas may become a bit “confused”, but it shouldn’t make your ride uncomfortable.

With this info in his hip pocket, the skipper headed to breakfast to discuss the crossing with the other captains who would also be crossing today.  It was determined that Still Waters II would cross with three other boats, Gammel Dansk, Chip Ahoy, and Aurora. It was agreed that the flotilla would slip off their lines and leave the marina at noon.

Just before shoving off, Mary managed to get a group shot of three of the four crews. 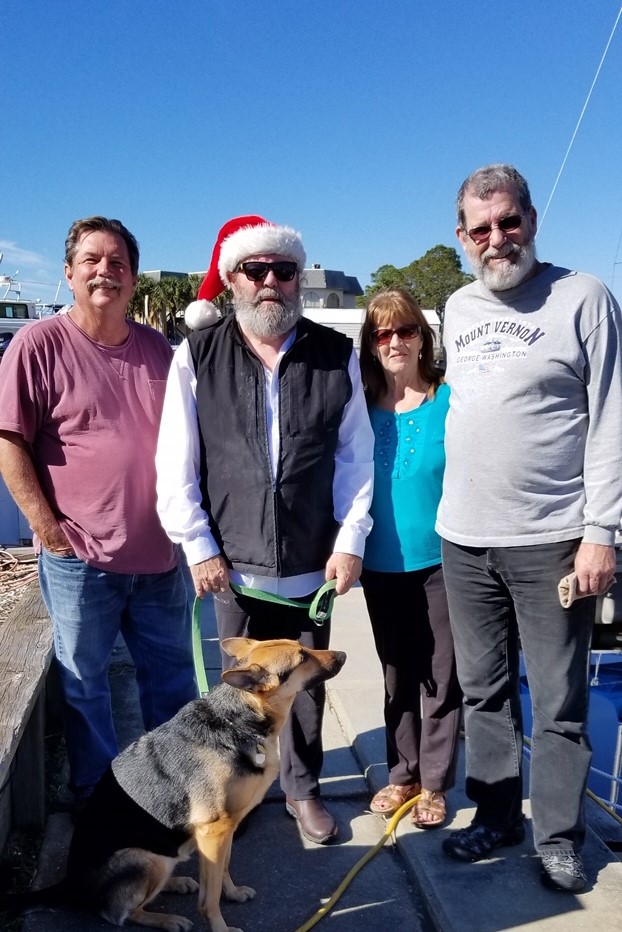 A fifth boat would leave with the four boat flotilla, but was headed to Clearwater so would be on a different heading once the boats entered the Gulf.  Compass Rose did manage to get this shot as the flotilla approached East Pass. 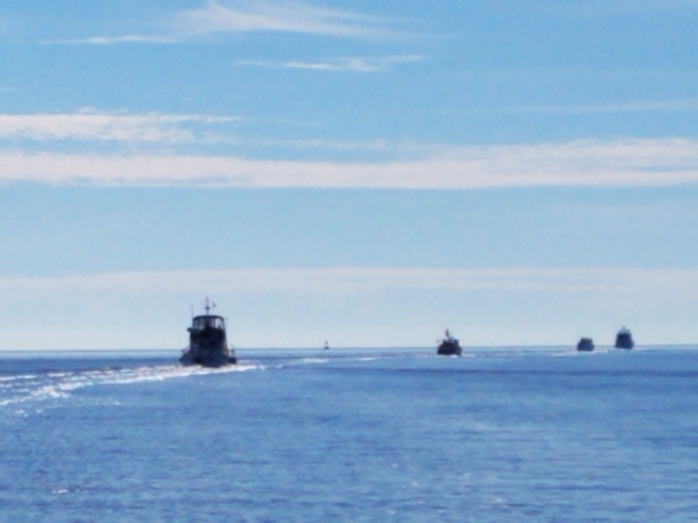 Once the group entered the Gulf, they found the conditions very favorable.  The winds were light as predicted which made for flat calm sea conditions.  The calm conditions existed all the way to sunset. 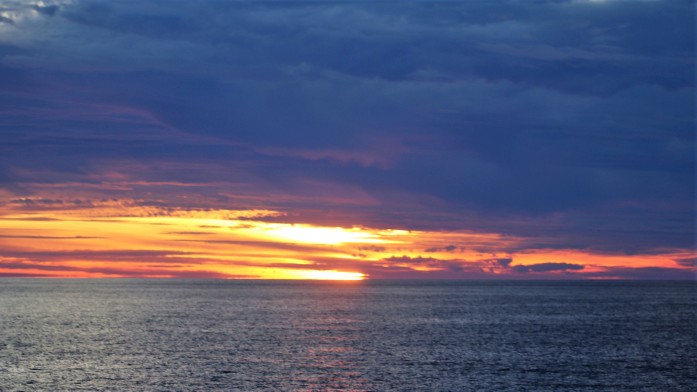 As the sun began to set, the flotilla closed ranks and got closer together to ensure they would be able to see each other in the dark. 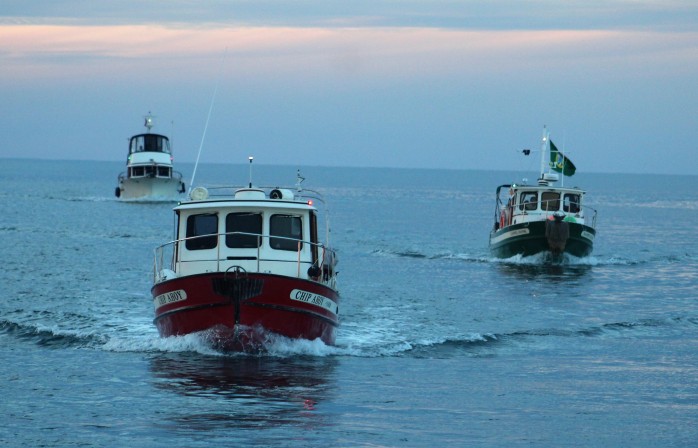 As the sun continued to set, a vibrant red orange sky greeted the flotilla.  Chip Ahoy came over the radio and reminded everyone that: “red sky at night, sailors delight.” 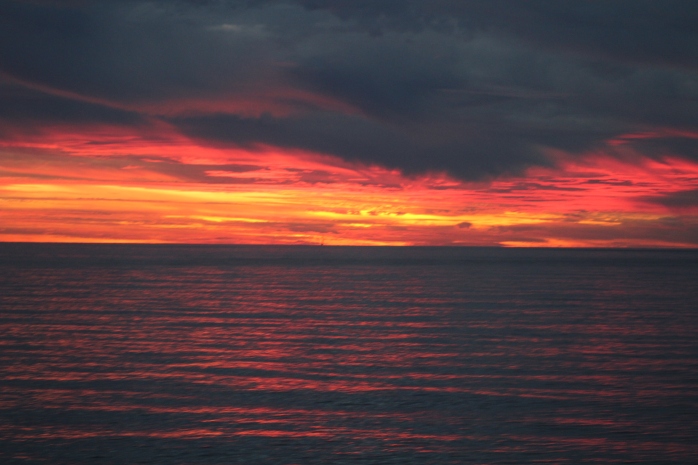 As predicted, the winds started to pick up out of the east following mid night.  The longer the wind blew the larger the waves began to form.  Most of the waves were 1-footers initially, but by 0300-0400, the waves were building to two feet.  The main problem was not the height though, but the direction.  The waves were striking on the side of the boat causing a very rolly motion.

The boats had started on a heading of 138 degrees magnetic to reach the Red 4 entrance buoy at Tarpon Springs that was initially 150 miles from the East Pass back near Carrabelle.  It was decided to alter course to see if that would help smooth out the ride.  The course change was initially successful.  However, just about sunrise the seas became very confused and seemed to be coming from every direction.  This lasted for about 2 hours before things started to settle down.

But the 26 foot tugs were still having a tuff go of it in the wind and waves. 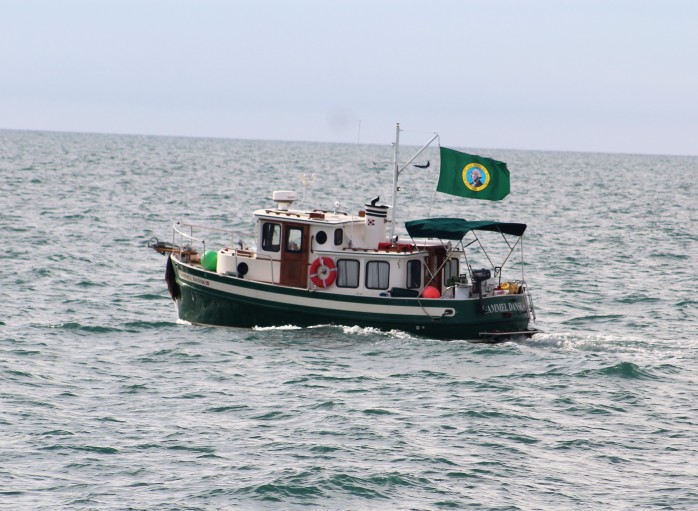 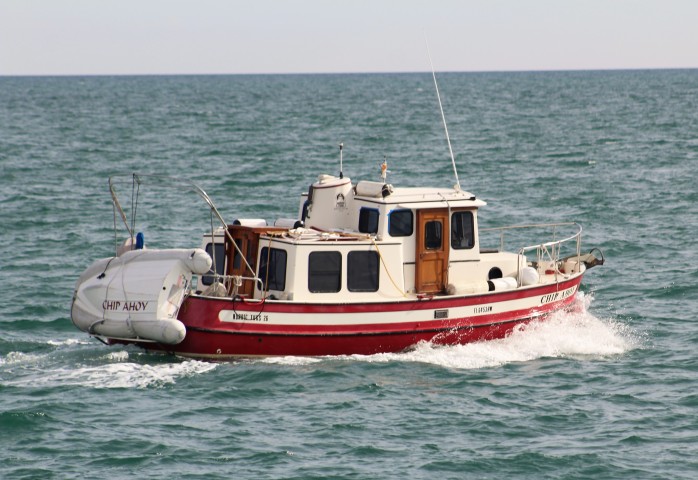 Within about ten miles of the Red 4 marker conditions had settled enough that the Admiral and skipper decided to try and pass some coffee over to Chip Ahoy.  Bill was making the trip solo and could not leave the helm to brew any coffee.  The Admiral went down and brewed some coffee and put the brew in a thermos.  She also put a piece of cake in a sealed container.  Then placed both items in a bag with straps that could be placed on the boat hook and handed over to Bill.

While Bill was trying to get up to Still Waters II, the skipper managed to drop the bag in the Big Pond and almost lost the bag with the Java Juice.  He finally snagged the straps on the third try just before the bag was out of reach.  With the bag back on the boat hook, Bill pulled along side Still Waters II and the skipper was able to get the goods to Bill.  He removed the bag from the boat hook and moved away from Still Waters II. 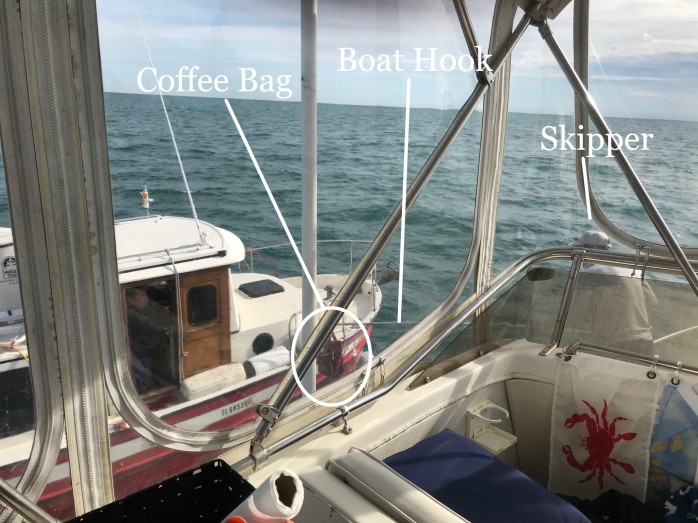 The view from Gammel Dansk during the coffee transfer.

The coffee and cake seemed to rejuvenate Bill and help him make the last few miles to the red 4 marker.  The skipper used two 20 oz bottles of Mountain Dew to help him thru the night.  At 1304, the flotilla finally arrived at the Red 4 marker officially ending the Gulf crossing.  The boats still had about two hours of cruising left before they were safely secured in a marina, but the worst was behind them now. 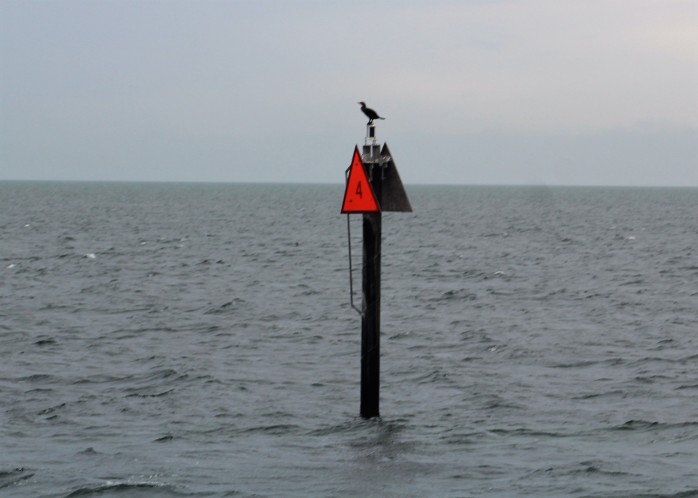 When they did finally arrive in the marina, the skipper calculated that they had travelled 175 miles at 6.5 mph which led to a long 27 hour crossing.

With the Gulf crossing behind them, the crew rented a car and headed to Texas to visit family for the holidays.  They will return to the boat sometime after Christmas and resume the quest for the Platinum Flag in the new year.  It appears that they could easily make Ft Myers in 5 travel days from Dunedin, so they should complete their second Loop before the end of January.