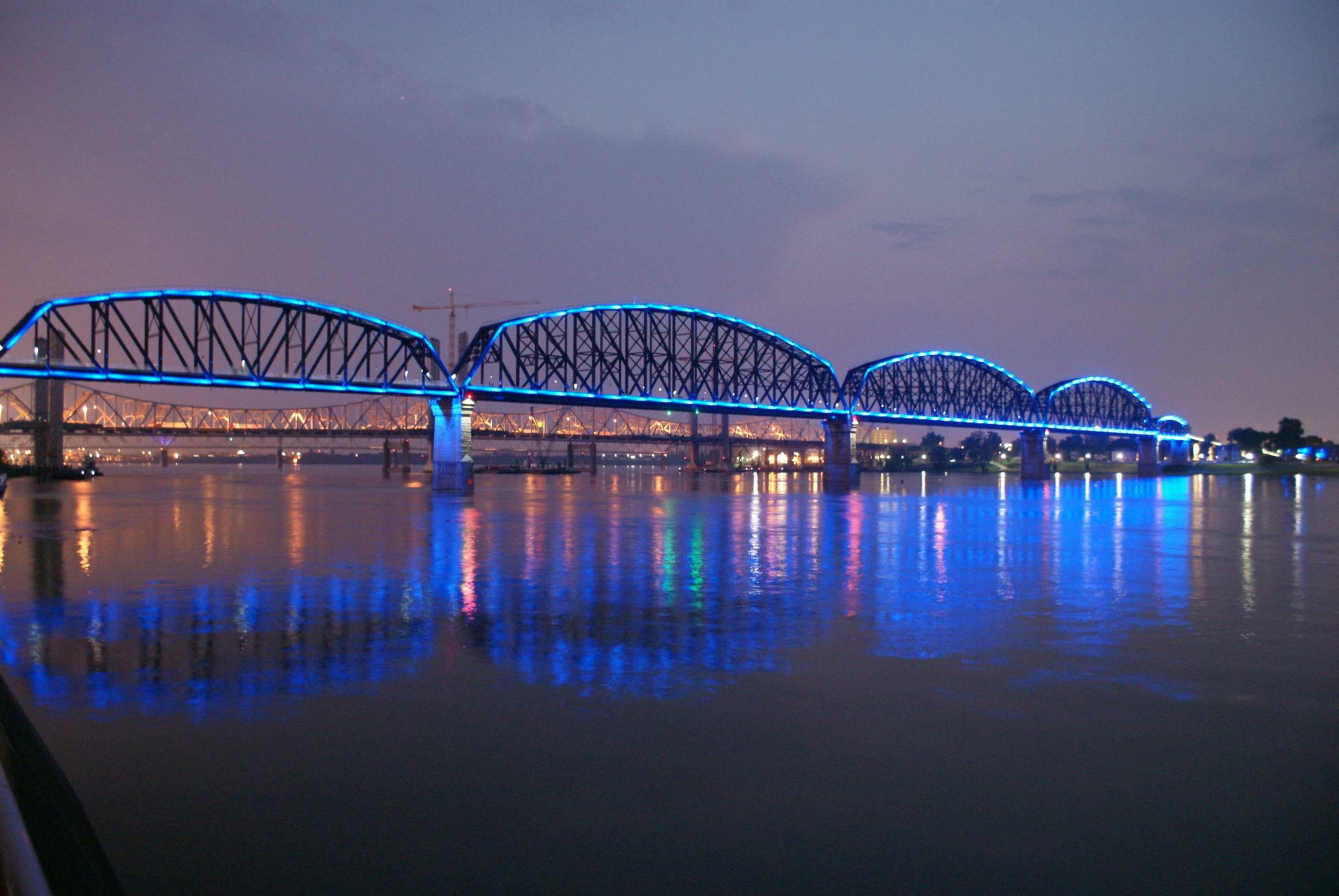 Summary of the Week

The crew left Evansville, Indiana on Tuesday, and travelled four days through some remote and sparsely populated areas between Indiana and Kentucky as they cruised the Ohio River. They made the following stops along the Ohio River:

The crew is at mile 603 on the Ohio River, so they have completed about a third of the journey.

Click on the Still Waters II Travel Map link to read detailed Voyage Logs of each days travels. The Travel Map has a new feature so that you can now “follow” the crew’s updates on the Travel Map. If you enter your name and e-mail you will receive an e-mail alert each time the Travel Map is updated at the end of each day’s voyage.

Owensboro is known for three things:

In fact the International Bluegrass Museum makes its home in Owensboro.

The bridge across to Indiana is blue.

There seems to be a distillery on every block with a restaurant serving bar-b-que just around the corner.

While hiking around town the crew found the Smothers Park. Originally, the park was established back in 1816 as the first City Park. In 1963, the park was upgraded and renamed Smothers Park. Then in 2012, a multi-million dollar upgrade was completed which resulted in the Park being declared the top playground in the world in 2015. Along with the Lazy Dayz Playground, Spraypark, the park also contains three fountains with a show every 15 minutes along with a cascading waterfall.

After the crew returned to the boat at Old Lock 45, two young men drove by and talked to the skipper. They had many questions about the boat and how the crew had gotten to Owensboro from Florida. After their curiosity was satisfied they drove away.

About thirty minutes later, there was a knock on the boat. The two young men had returned bringing gifts of bar-b-que. The crew invited them aboard and gave them both a tour. The two young men will be seniors in high school and are looking forward to their last year of high school. While talking, the subject of a hanging that occurred in town back in 1936 surfaced. Turns out the hanging took place on Trey’s great grandfathers vacant lot in town. This execution also turns out to be the last public hanging execution in the United States.

At night, the Blue Bridge is lit and it puts on a beautiful show as seen below.

The next two days up river were nothing to write about, but there is an incident that occurred on the 10th that have the crew concerned. With more than 10 inches of rain in northern Mississippi, the Tenn-Tom Waterway levels have begun to rise. Unfortunately, a barge broke free and drifted downstream and rammed the Stennis Dam. Then the barge sank blocking three of the five gates on the dam.

The crew have stored their motorhome in a dry storage area on the same property as the Columbus Marina, which is beside the Stennis Lock. Because of the major flooding, the road out to the marina has been shutdown. The roadway acts as the emergency spillway for the dam, and water is running over the road. There is one gentleman in the marina that has been giving the crew updates on the status of water level where the motorhome is stored.

Well in times like these, the crew grabs hold of Philippians 4:6 (NLT) Don’t worry about anything; instead pray about everything. Tell God what you need, and thank him for all that he has done.

What the crew needs is for that water to not rise any further and actually begin to recede.

5. June 12, Time 1230: Water level crested about midnight. Have seen a whole 4 inch drop in level since. At least we are trending in the correct direction.

6. June 12, Time 1500: Surely you have to be kidding. The Corps of Engineers just released a second notice to mariners, the lock and dam downstream of the Stennis Lock has now also had a loose barge crash into the dam. Have to wait and see how this accident unfolds and impacts the Stennis Lock.

This is the year of the lock and dam problems. Besides these two dams on the Tenn-Tom having issues. The Erie Canal is having problems also. Lock E-17 has a broken bull gear that was built over a hundred years ago, so they have the gear at a machine shop working on a repair. Boaters were stuck for several days while the canal folks positioned a crane to temporarily operate the gate while they wait on the gear repair.

Then at Dam 30 the earthen works collapsed near the dam and drained the pool to just about 5 feet. This lock is on the western Erie Canal that Loopers have to take this year because Canada’s border is still closed.

The western Erie Canal has many bridges in the 15.5 foot range that boats must be able to get under. For those too tall, or those who now cannot get pass Lock 30, the boats can go to the Welland Canal on the south shore of Lake Ontario. Well, till today that is. Now the Oswego Canal Lock 3 has broken, blocking access to Lake Ontario where boaters need to go to access and pass through the Welland Canal (Lake Ontario to Lake Erie).

A challenging cruising season is certainly shaping up for Loopers.

The crew arrived late to Louisville because of the three hour wait at the McAlpine Lock. Upon arrival they found a slip at the free docks at the waterfront park. They decided to take the one mile pedestrian, Big 4 Railroad Bridge, over to Indiana for dinner. Along the way they saw an historical marker that discussed the original construction of the bridge back in 1895. The construction was plagued with mishaps which lead to 44 worker deaths. On December 15, 1893 strong winds caused a large crane to be dislodged. This in turn caused a truss with 41 workers on it to fall into the Ohio River. A ferry operating nearby witnessed the fall and performed the rescue of 20 of the 41 men. Because of all the accidents, the company building the bridge eventually went into bankruptcy. The Cleveland, Cincinnati, Chicago, and St Louis Railway purchased the bridge and hence the name Big 4 Railroad Bridge.

After making it back to the boat after dinner, the crew was entertained by the beautiful sunset.

Then after the sun set, the bridge was lit to provide a spectacular show.

The crew has been exploring the waterfront on both sides of the Ohio River, doing boat chores, and troubleshooting the alternator. The skipper hopes he has fixed the alternator issue but the proof will be in the pudding when they cruise on Monday.

Edison lived in Louisville for 1.5 years starting in 1866 when he was 19 years old. He worked as a telegraph operator at Western Union and performed experiments at home in his spare time. He would end up getting fired and he moved on to New Jersey in 1867.

In 1883, he returned to Louisville to enjoy the Southern Exposition opening which just happened to be showing 4,600 of his new incandescent light bulbs.

Paul got his start in football playing for the local high school. He won a Heisman Trophy while playing for Notre Dame. Then went on to play on Vince Lombardi’s Green Bay Packer teams of the 1960’s.

Pee Wee made his professional debut in 1938 for the Louisville Colonels. He went on to play for the Brooklyn Dodgers in the 1940’s, where he led his team to 7 National League pennants.

Cassius Clay was born and raised here in Louisville. Hard to figure out what he was most famous for: three separate heavy weight boxing titles, his stance against the Vietnam War, his leadership in the Civil Rights movement, or his poetry (I float like a butterfly, Sting like a bee.) I guess you need to decide which of these is the greatest of all time.

We have some friends who just had some work done on their boat and are not happy with the billing. Reminds the skipper of the BOAT acronym: Break Out Another Thousand, which also leads to our boat name this week. Apparently a play on words of ‘depth finder’ which all good captain’s enjoy.

The crew will shove off the Louisville Waterfront and back out onto the Ohio River and head towards Cincinnati.

3 Comments on “Bar-B-Que, Bourbon, and Bluegrass”