Eric here reporting on the completion of the Albemarle Sound Loop side trip.  The hospitality of the marinas and town folks has been overwhelming.

The original float plan has been altered, and the new course after leaving Plymouth is to cruise to Columbia and then on to Hertford.  After Hertford, the crew will go back to the ICW and head to Norfolk (mile 0) via the Dismal Swamp Route.

The run over to Columbia was very rough on Thursday, August 27th.  The wind was out of the east and blowing directly down the sound. Unfortunately for the crew, east was the direction they needed to head after leaving the Roanoke River.

The only good news is that the rough ride was short because the run only took 4 hours.

Upon arriving in Columbia, the crew walked around town. On the side of one of the buildings is a painting.  Not so unusual.  However, within the painting are 10 hidden animals that can be seen around the area.  The crew spent about an hour looking the picture over and found 8 of 10 of the animals.

On Friday morning the crew walked over to the Pocosin Lakes National Wildlife Refuge and wandered around the boardwalk.

If you are like the skipper, you may be wondering, ‘what in the world is a Pocosin?”  The crew learned that a Pocosin is a swamp on a hill.  The term hill is used loosely here, can be just a few feet rise from the coastal waters.

The refuge was very peaceful.  One section of the mile long boardwalk was closed and the entrance was guarded by a large spider.  There were many large spiders along the walk.  There must be lots of bugs in the swamp to grow such spiders.

Completing the boardwalk, the crew saw many large spiders, turtles, and a rare woodpecker. The skipper heard the woodpecker, but it took almost ten minutes to locate the little bird.  He was darting in and out of a hole in a tree.  Great way to spend the morning.

The crew then wandered back over to the painting and found the last two hidden animals.  After lunch, it was time to shop the town down and provision for the next week of the journey.

On Saturday, August 29th, the crew motored over to Hertford, North Carolina.  The Sound was up to its usual tricks.  The wind was out of the east again but the waves were confused and seemed to be coming from every direction.  It took a couple of hours to cross but luckily once in the river the waves calmed down.  Then it was back to dodging crab traps.

The skipper says he would not want to be a crab in these waters because with so many crap pots it would be impossible to move around without getting caught.  Lucky for the crabbers, one female has about 2 million little crabs per brood.

The marina docks in Hertford are brand new and have not been used much by larger vessels.  This was apparent as the crew came into the harbor at the end of the river.

The last S swing bridge in the country guards the entry.  The bridge tender stopped the traffic and swung the bridge open.  The drivers of the stopped cars were getting out of their cars and taking pictures as the boat passed through the bridge. Even the bridge tender was taking pictures. Once docked, a man showed up from the newspaper and interviewed the crew for the local paper.  The paper only comes out weekly on Wednesday, and looks like the crew will be the news of the town.

The REAL big deal in Hertford is Jim ‘Catfish’ Hunter.  For those not in the know, he was born, raised, and died here in Hertford.  The skipper is a big baseball fan, and was a big fan of ‘Catfish” Hunter.  The Chamber of Commerce houses the museum dedicated to their favorite son. 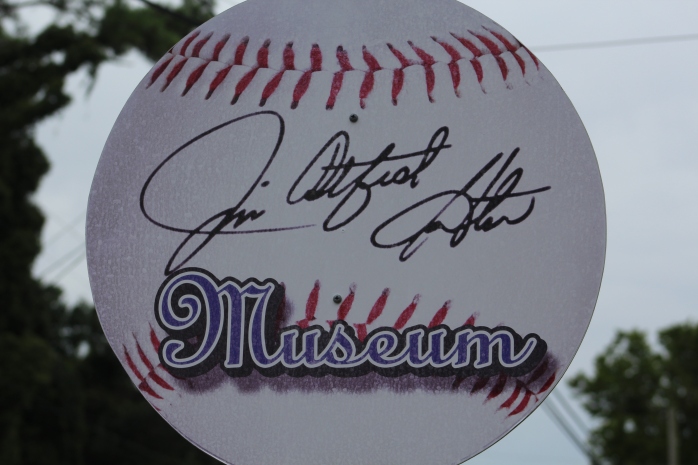 Born April 8, 1946, James Augustus Hunter learned to play baseball on his family farm.  He claimed that his three older brothers taught him the game.  He developed his awesome control by practicing throwing rocks and potatoes through a hole in the family barn.  The hole was made by the brothers.  They painted an X on the barn, then cut a hole at the center of the X.

He was only 17 and still in high school when he signed his first contract with the flamboyant owner of the Kansas City A’s.  His parents had to co-sign the contract.  First contract was for $75,000. 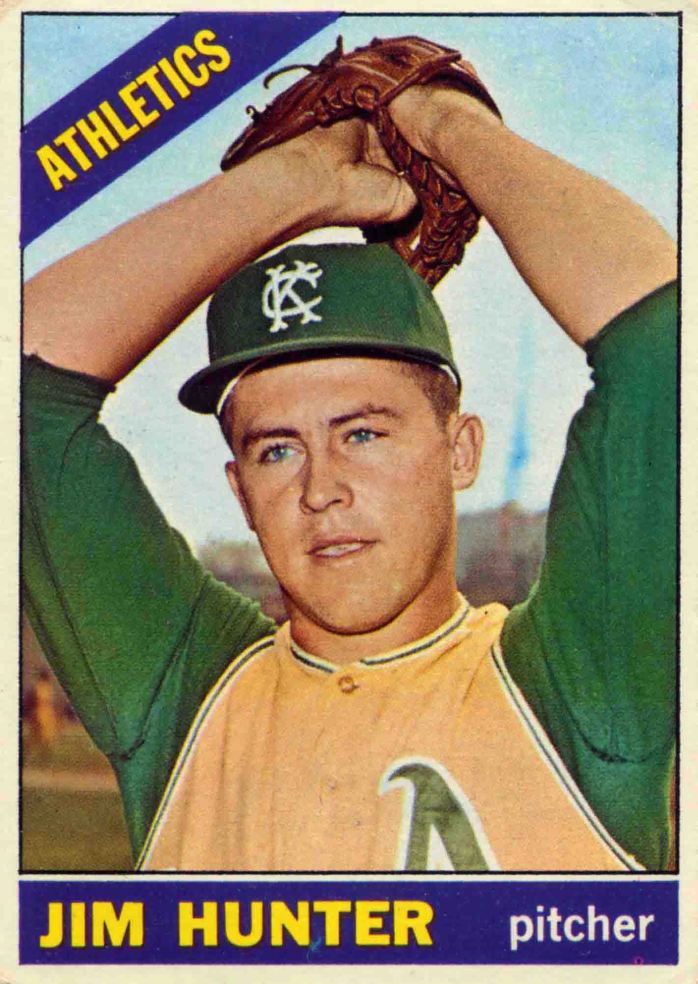 His career almost never got started because one of his brothers accidently shot him in the foot with a shotgun.  This caused the lose of his big toe, and a delay in his major league start.  Charles O Finley, owner of the A’s, sent him to a clinic and covered his medical and rehab cost. 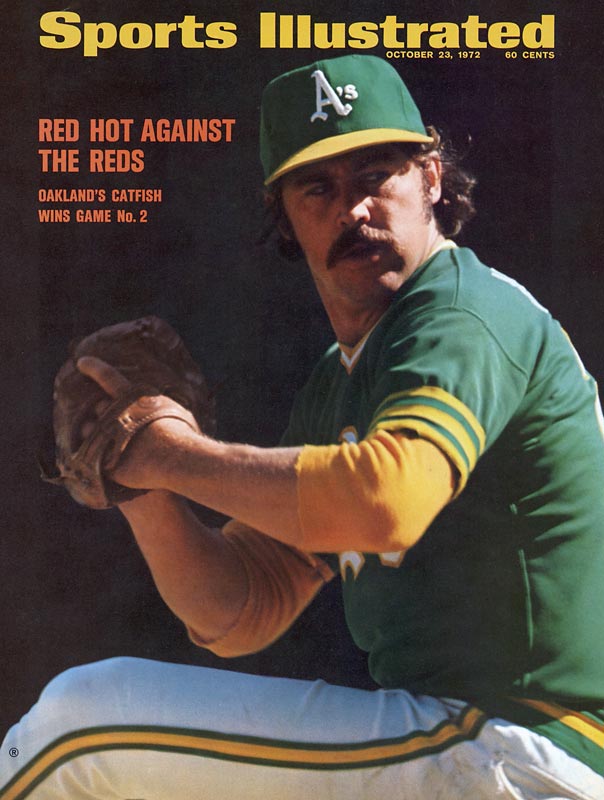 Following the 74 season, he discovered a clause in his contract that was not honored.  Specifically, Charlie O was trying to defer 50% of Hunter’s salary to the next year for tax purposes rather than pay at the end of the season ($50,000).  Hunter took the case to arbitration and became the first free agent of the era.  A bidding war ensued for his talent (23 of 24 teams made offers), and he eventually decided to sign with the New York Yankees.  This contract was the first million dollar contract in sports.  He got a 1 million signing bonus and a 3.5 million dollar contract.

In 75, Hunter led the American League with 23 wins and taught the Yankees how to win again.

In 76, Hunter became only the fourth pitcher to win 200 games in the modern era before his 31st birthday.  It was also in this time that he was diagnosed with Diabetes and his numbers began to fall off.

He honored his five year contract with the Yankees and retired back home to Hertford after the 79 season to return to farm life.  The locals talk of him sitting in the corner pharmacy signing baseballs for fans with one caveat, they were not to sell the ball for more than $3 because he wanted everyone to have an autographed ball.

In 1987 he was inducted into the Baseball Hall of Fame.

In September 1998 he was diagnosed with Amyotrophic Lateral Sclerosis (ALS) and a year later he died of complications from ALS on September 9, 1999 at the young age of 53. 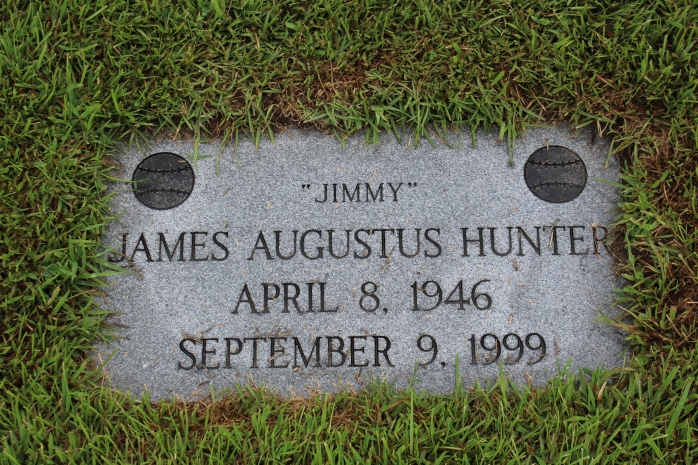 George Steinbrenner, owner of the Yankees who signed Hunter for 3.5 Million, said “We were not winning before Catfish arrived…… He exemplified class and dignity and he taught us how to win.”

Former teammate Lou Piniella said, “Catfish was a very unique guy.  If you didn’t know he was making that kind of money, you’d never guess it because he was humble, very reserved about being a star type player. But he told great stories.  He had a heck of a sense of humor.  When you play with guys like that, you feel blessed.

Best testimony of all is the town folk who speak highly of him and his family.  Just another farmer here in town that just happened to play a little ball in between hunting seasons and harvest.

← Albemarle Loop Side Trip
The Beginning or the End →