That Had to Hurt

La Salle here catching you up to date on the latest travels of Still Waters II. Click on this link to see the day- to-day travel log.

With a really really really cold spell (temps in the 20’s) and high winds predicted at the end of the week, this will probably be the last of the fall foliage spectacular.  I guess winter will finally arrive.  The extended autumn has been fun though and allowed extended cruising in the inland rivers. 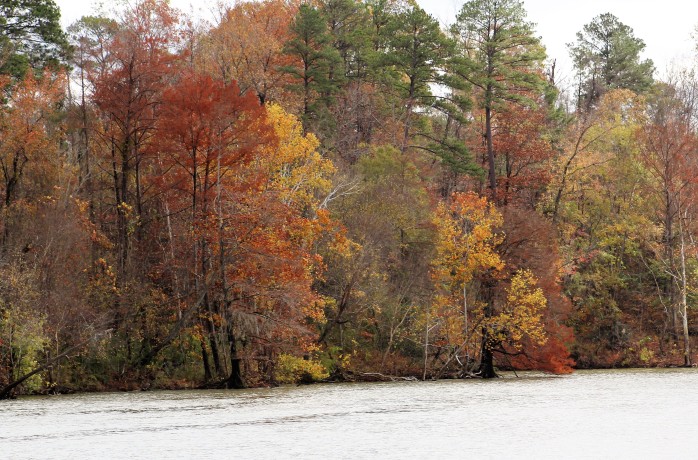 The crew left Demopolis on Monday morning in fog and light rain.  The goal for the week was to make the 229 miles to Mobile Bay in four runs:

Additionally, this stretch of river is very remote with no towns or marinas on the water.  This is a place where the boat needs to run true and drama free.

However,  back in 1979 the tow Cahaba had a little drama that you might find interesting.  The water was flowing 24 feet above flood level on April 19th.  The tow was approaching a bridge about mile marker 200.

The tow boat Captain had his crew release the tow from the barges.  The crew members stayed on the drifting barges as they floated under an 11-foot clearance under the east section of the bridge.

The tow Captain went to back up so that he could take the tow boat under the center of the lift bridge where he could safely pass under the bridge.  When he went into reverse, he realized the crew forgot to release a line on the starboard barge.  With the force of the current and the line attached to the drifting barges, the tow turned sideways on the bridge.

Eventually the water forced the 30-foot tall tow under the 11- foot bridge clearance.  The tow Captain used his loudspeaker to tell the folks on the bridge to evacuate the area.  In fact he is quoted as saying, “Evacuate the bridge, this ain’t no fire drill.”

To say the captain got the ride of his life would be an understatement. 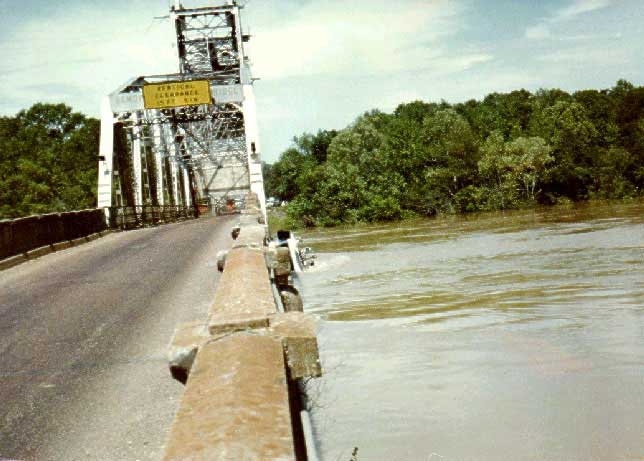 Miraculously, the tow popped up on the downstream side of the bridge and the starboard engine was still running as the tow actually righted itself. 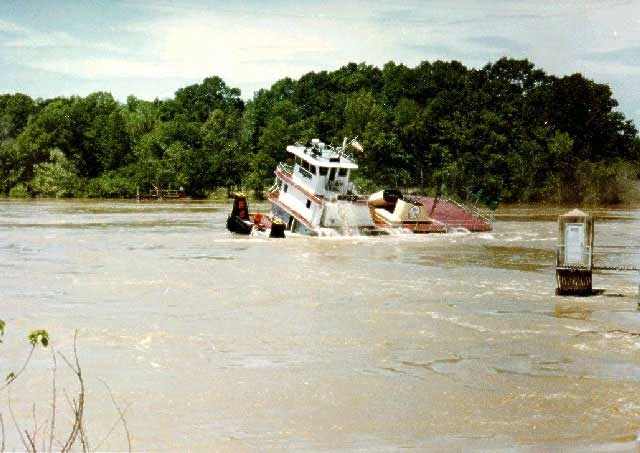 Notice the crew members still on the barge, bet they were glad they did not take the ride like the tow captain.

With a 71-mile day with one lock to negotiate, the crew got an earlier than usual start.  The first obstacle was getting passed the dredge that was set up in the mouth of the marina.  The dredge had not started operations for the morning so the operator waved the crew on bye.  Next challenge was to make the Demopolis Lock before the rain started.

The lock operator had already told the skipper he had the lock ready for the crew as they departed the marina.  The lock is only three miles down the river so all looked good to go.

The crew went right into the lock and once again got a fast drain down 35 feet.  When the gates opened, you could see the tow coming around the last bend before the lock.  More lock FOG!

The rest of the 68-mile cruise was uneventful while cruising in the rain.

To prevent getting pushed into the shore by the wake of a passing tow or wind, the crew dropped both a bow and stern anchor.

As sometimes happens, easy days become hard days.  Such was today.  The plan was to travel only 26 miles to a famous looper stop, Bobby’s Fish Camp.  Basically a 160 foot dock and a catfish restaurant.

The bow and stern anchors did a good job of keeping the boat in the creek.  Maybe just too good of a job.  The wind was blowing hard out of the west which was going to push the boat forwards and towards the shore as the crew tried to weigh the stern anchor.

After many failed attempts to make progress on the stern anchor line, the wind eventually blew the boat around enough that the line was tangled under the boat.

The skipper finally had to go swimming to free the line from the prop and rudder.  Once the line was clear of the boat, the crew finally got the boat over the stern anchor but could not dislodge the anchor from its muddy hold.

Next plan was to move forward and weigh the bow anchor first.  Finally, a little success.

They then moved the stern anchor line to the bow, and then use the boat to free the stern anchor. After nearly two hours of wrestling anchors, both anchors were finally on deck.

The skipper started looking for the easy button because he wanted to hear the words “That was easy.”

With the anchors up the crew made their way to the legendary Bobby’s Fish Camp.    Unfortunately, our crew will not enjoy the fried catfish because the restaurant is only open Thursday thru Sunday.

Two other boats joined Still Waters II on the dock at Bobby’s.  One is an 84-foot yacht on its way to its winter home in Fort Lauderdale.  Two delivery captains are working together to deliver the boat for the owners.  The boat spends the college football season in Knoxville where the owners enjoy the home football games. 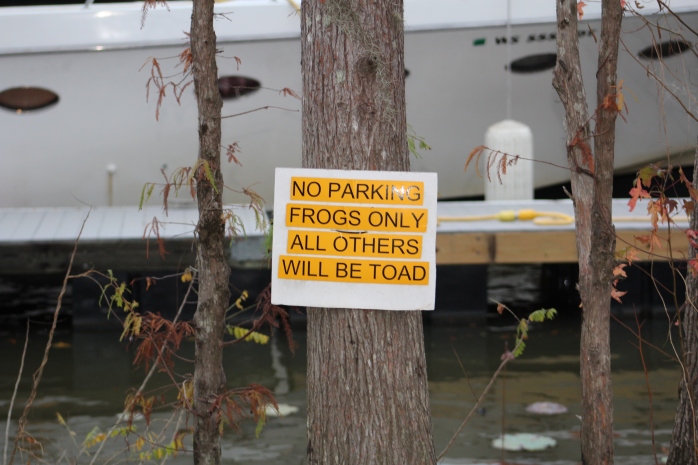 With a planned 66-mile day to the Alabama River Cut-off and one lock, the crew left earlier than usual.  They hoped to make the anchor spot before dark which is about 1645 these days.

The crew opted for going to the right thru the lock rather than the ride over the dam.

The run started out with heavy cloud cover that made it look like it was a misty rain.  After clearing the lock there was plenty of water going over the dam so the boat got a nice one knot push with the current.

After clearing the lock today, the crew is only 5 feet above sea level.  The water will be tidal now and start to turn brackish and become saltier as they run south.

About noon the sun finally started to break thru the clouds and warm things up a bit.

The crew made their goal of anchoring before sunset and now set to spend a silent night on the hook.

Another early start to ensure that the crew makes it 66 miles to Dog River Marina, south of Mobile, Alabama.  There is a cold front packing temperatures down in the low 30’s expected to arrive tonight and the crew wants shore power so they can stay warm.  The crew weighed anchor and began the last day on the Tombigbee Waterway.

The crew ran by this large steel plant that opened back in 2010.

The site encompasses 3,600 acres and the mill employees 2,600 workers.  This was the first of many industrial projects in this section of the river.  The closer the crew got to Mobile the more industry was encountered.  Nice to see signs of civilization again after cruising through some extremely remote areas the last few days. 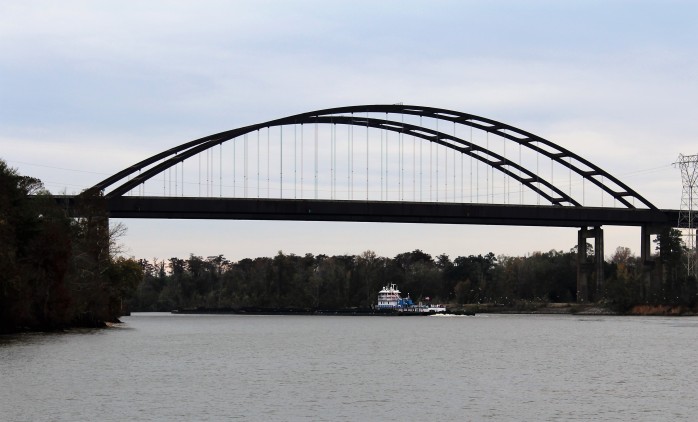 The first sign that the crew is approaching the gulf.  A Brown Pelican painting a green can white. 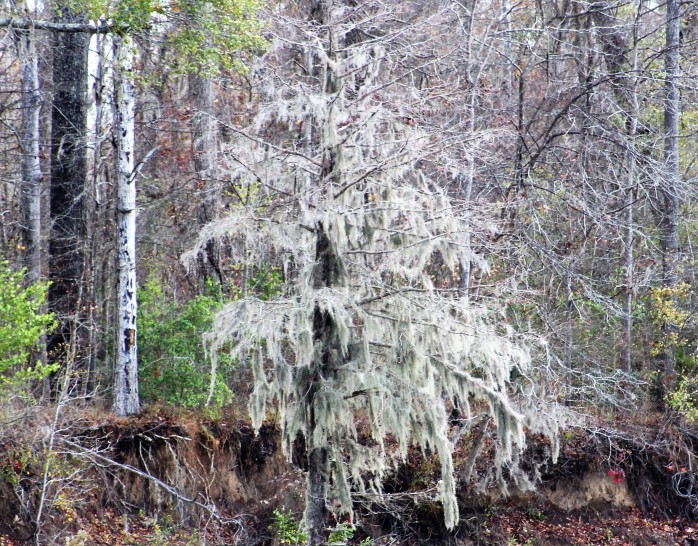 The bridge tender was gracious and had the bridge open as the crew approached. 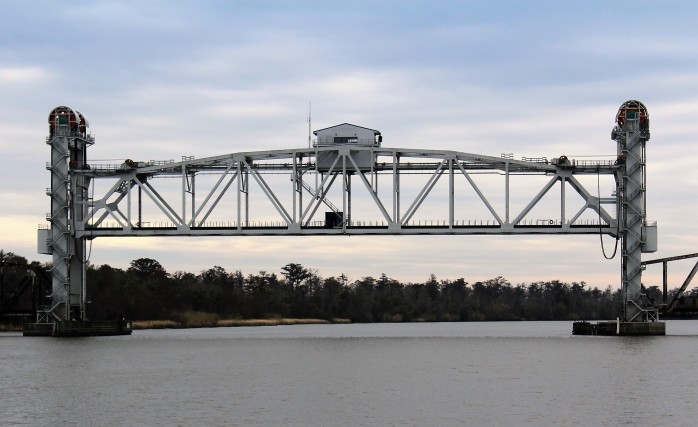 The first view of Mobile.

The water front in Mobile was a buzz with activity.

New Navy ships (targets as submariners like to call them)  being built in Mobile.

Looking south out into Mobile Bay.  Been a while since the crew saw this kind of open water. 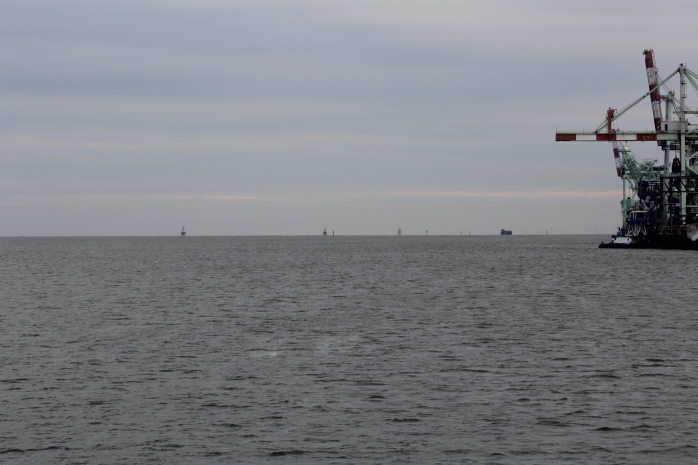 The run down the bay was more exciting than wanted.  That cold front is arriving and bringing some strong winds from the north.  The wind was 13 mph with gusts over 20.  This caused three to five foot seas and the wind was blowing the water out of the already shallow bay.

The last four miles to the marina required the crew to travel westerly which meant that there were beam seas off the starboard while the wind tried to blow the boat out of the narrow channel.  The channel was barely 6 feet deep and was running at 5 feet most of the way.

Upon arrival at the marina, they saw the boat Jet Stream tied to the dock.

After taken on fuel and getting settled at the dock the crew went over to pay Jet Stream a visit.  They had not seen each other since leaving Jacksonville back in April.  Jet Stream must have sensed the arrival of our crew because KC had just completed baking some cookies.  Timing is everything, cookies hot out of the oven.  Life just does not get any better than this!

Next Week – The crew will run over to the east side of the bay and visit the town of Fairhope.  Then continue south to the Gulf Intercostal Waterway  and head east to Orange Beach.   The plan is to stop at the Warf and stay through the holidays.

It is with sadness that I have to inform you that this will be my last post.  Eric the Red will return next week to join the crew on their voyage east back to Fort Myers.  I have been negotiating with the skipper to turn west and head to the Mississippi River, but he will have none of it.

It has been fun travelling and exploring the inland rivers with you for the last three months.

3 Comments on “That Had to Hurt”