We had a few more virtual crew members come aboard in the last week.  Welcome aboard Scollier99 and Joshua Duns!!!

The crew left North Myrtle Beach on Monday and docked at Southport at the end of the day.  Tuesday the crew put in a long day and anchored just east of Swansboro in Mile Hammock Bay.  Then the crew pressed on to Morehead City on Wednesday.  The crew took a side trip up to New Bern, the colonial capital of North Carolina, on Thursday.

Click on this link to see the weekly Vimeo video.  This week’s video shows a few bridge openings, a helicopter flying overhead, and an Osprey in her nest.

The crew started the day by walking 1.5 miles to a Fuddruckers’s so the skipper could get a ½ LBS Elk Burger to celebrate Father’s Day.  After gorging on burgers and fries, the crew walked back to Barefoot Landing to walk amongst the shops.

They saw a gator swimming just beneath the boardwalk.  Then a gator sunbathing by a store. 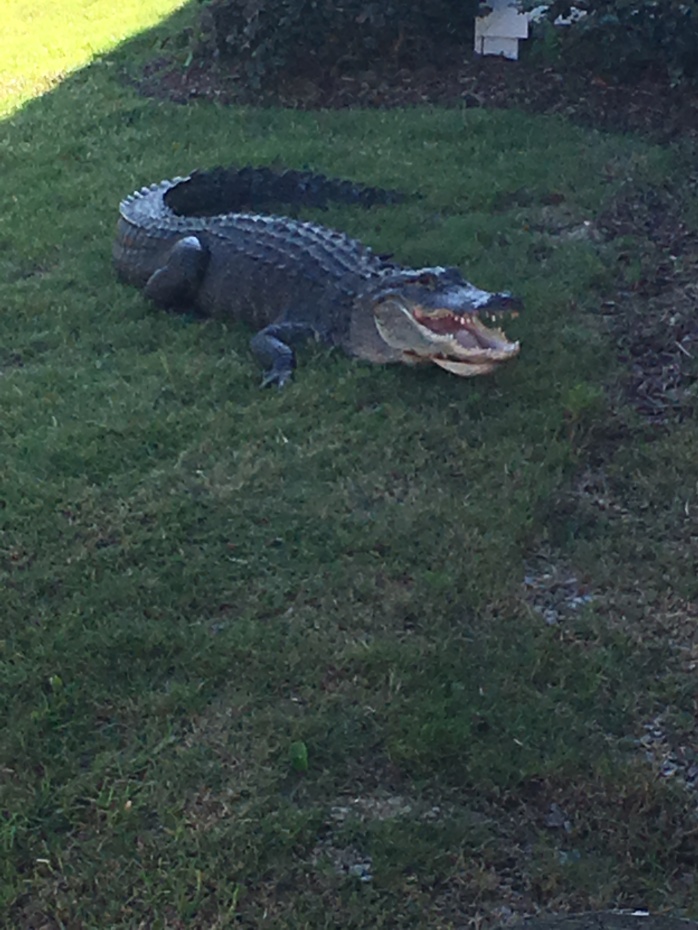 When the evening fell they found a few street performers.  One guy was playing the sax and was very good.  A man on stilts tying balloons for kids of all ages.

Then they found a guy doing a juggling act while sitting atop a seven-foot unicycle.  This guy put on a really good show with audience participation. 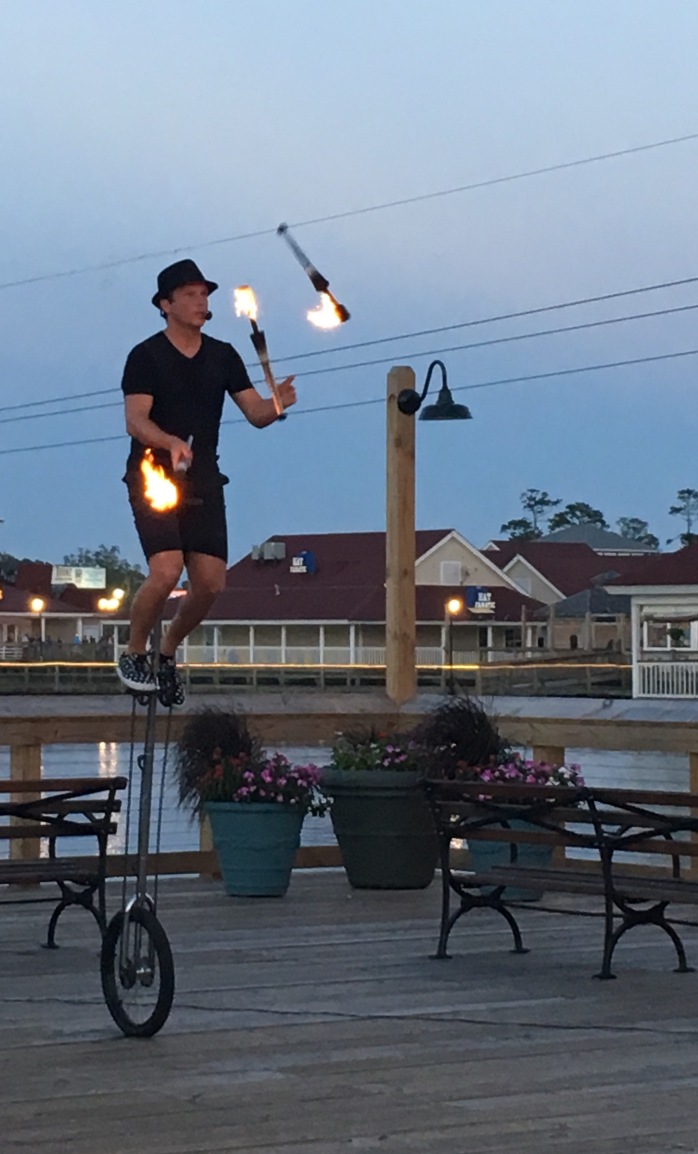 This was a very non-descript cruise until the last ten miles.  Really not much to report.  But leaving North Myrtle Beach always requires the utmost in situational awareness as the helmsmen navigates the ‘Rock Pile.’ 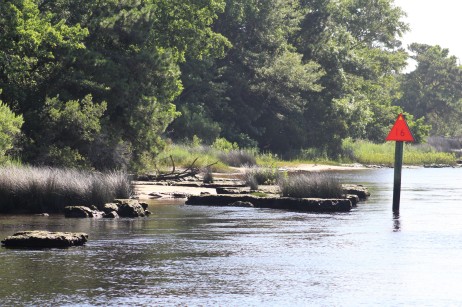 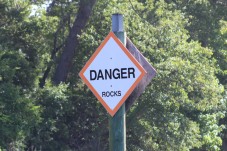 However, at about mile 315 a large blue boat overtook Still Waters II.

The Admiral and skipper first met Cathy and Glen in Norfolk in May 2015.  They last saw them in June 2015 at Sweetwater Landing where they were helping Brandon with some work around the marina.  It was a pleasant surprise to see and talk with them on the water.

About this same time the wind decided to kick it up a notch or two to 18 knot winds.  Just in time for the crew to dock.  Upon arrival, the skipper just turned the boat parallel with the dock and let the wind blow the boat up against the dock.

After docking, it was time to go walk the town done to see what this place is all about.  After walking around a bit, the crew decided that they had actually been here before.  The skipper came here back in the early 2000’s to assist another nuclear power plant with some work control issues.  The Admiral had also accompanied him on the business trip.

While walking down the river walk, they read about a man who was a Cape Fear River pilot that helped smuggle confederate goods to Wilmington during the Civil War.  These waters leading into Cape Fear have sunk more than their fair share of ships, so a knowledgeable pilot is a good thing when carrying commercial cargo.  Pilots are still used to this day.

Amazing enough, the pilots were paid $3,000 in gold per transit back in the Civil War days because not only did they have to negotiate the hazardous shoals, they also had to bust thru the Union Blockade that was established to prevent goods from making it into the southern states.  T.M. Thompson made 34 successful runs in three years during the Civil War.  After the war, the fee for a river pilot dropped down to $200 per transit.

Cruised in the rain most of the day so not really much to report.  The below pic was taken during some slack rain when the skipper could actually see out the front.  He ran with the radar on most of the day practicing piloting the boat in low visibility.

After stopping at Mile Hammock Bay to anchor, a helicopter buzzed around the bay until nightfall.  The crew thought he was gone for good when it appeared he had left.  Unfortunately, sometime in the middle of the night he showed back up and buzzed the boat a few times, waking everyone on board.

When leaving the anchorage the crew ran down a long stretch of water that is surrounded by Camp Lejeune.  When passing this sign on the water, the lights were off so the skipper continued north along the waterway.

However, the marines must have been practicing some artillery drills because the booms , bangs, and percussion sound blasts were vibrating the boat for the next twenty miles.

The crew pressed on though because they had there sights set on a dock and dine experience in Swansboro.  Back when our crew left Jacksonville, the crew of Miss My Money recommended a restaurant in Swansboro to stop at and try their peach fritters.

Our crew arrived in Swansboro and docked at the free town dock.  From the dock, it was a short three-minute walk to Yana’s to try the peach fritters.  The fritters were exceptional.  This might just be the best desert on the Great Loop, even better than Canadian Butter Tarts.

The Admiral walked in a few of the shops on the way back to the boat.  After shoving off from the dock the skipper noted that they had spent about two hours in town.  They will add this stop to future  passages thru the area.

After the pit stop at Yana’s, the crew headed for Morehead City where they docked for the evening.  The boat they shared the dock with dwarfed Still Waters II.

The crew got underway and were passing under the Morehead City/Beaufort Bridge when a tow backed out of a side channel.  The skipper had to stop and back up to prevent getting hit.  The skipper does not think the tow captain saw Still Waters II before backing out.  The tow did not blow his horn either to warn he was backing out.  Good news though, no collision, just a near miss. 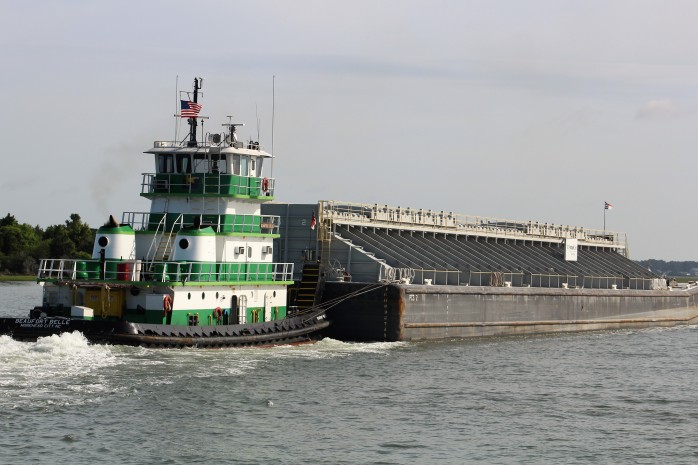 The crew ended up following the tow for around twenty miles thru Core Creek and Adams Creek.  When the tow reached the Neuse River, she turned right and our crew turned left to head to New Bern. 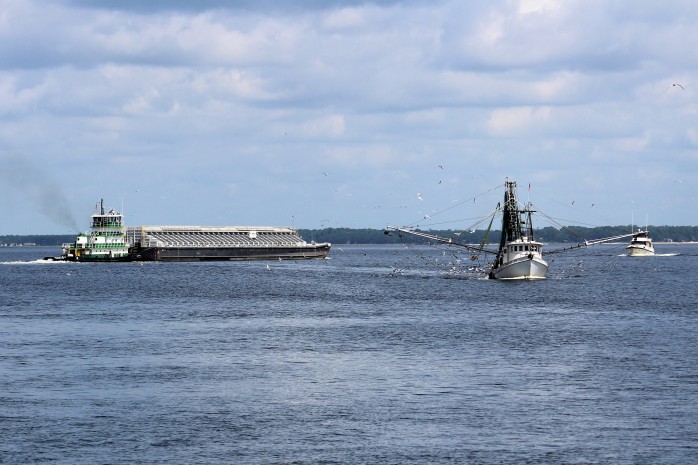 A close-up of that shrimp boat to see all the birds swarming around.

After another twenty-four miles on the Neuse River, the crew docked at the Grand Marina and Yacht Club to begin their exploration of the town.

New Bern was settled in 1710 by Swiss and German immigrants.  The leader of these folks was from Bern, Switzerland so he named the town after his hometown. 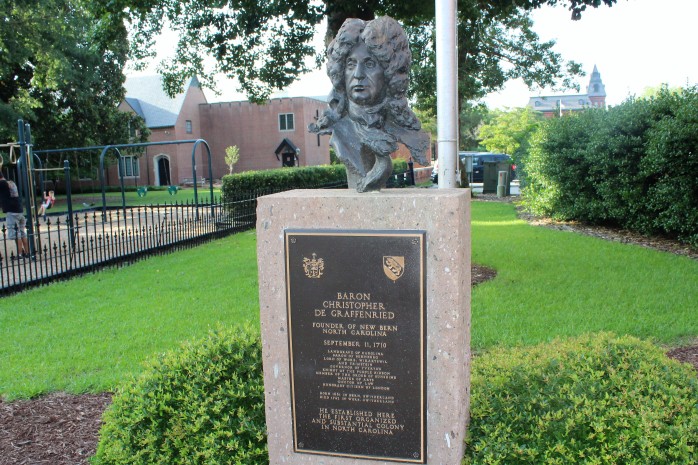 New Bern is the second-oldest colonial town in North Carolina and has served as the capital of both the colonial government and the state.

The word Bern is Swiss for Bear and bears are the towns mascot.  In 2010, as part of the 300th birthday celebration, a public art display of bears was commissioned.  There are over 50 bears around town, many of them in the historic district near the water front.  Some of the bears the crew has found while exploring the area:

The skipper and Emma have also started on the Pokémon Adventure.  They have been hunting Pokémon all over the Historic District. 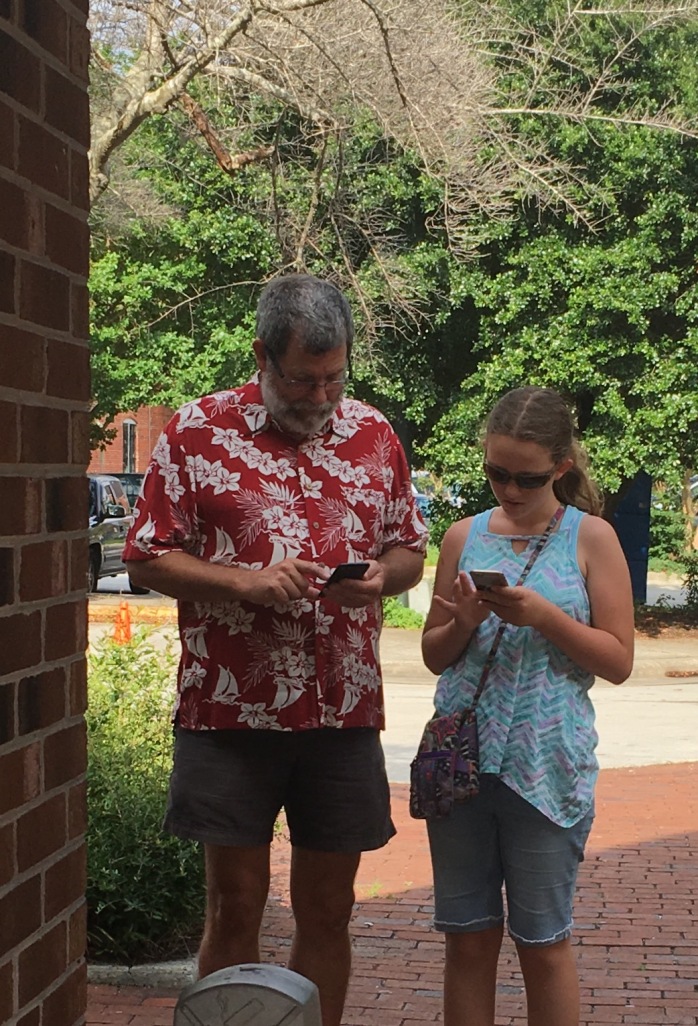 Not sure what the name of this boat means but liked that it hailed from Fort Worth, Texas.  Saw the boat as the crew entered New Bern Grand Marina.

← Boys Being Boys
Treasures of Memories →