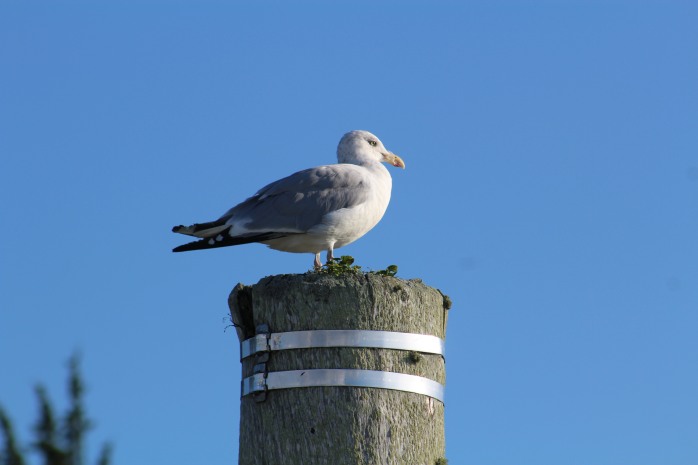 A fellow WordPress blogger has come aboard as a virtual crew member by following the Still Waters II site.  Welcome aboard Transit Address.

After waiting out the weather in Portland on Sunday, Monday, and Tuesday; the crew got back underway on Wednesday and travelled to the Isle of Shoals.

Thursday, the crew made way to Boston Harbor and anchored near Long Island.

After pulling into the Sandwich Marina at the eastern entrance to the Cape Cod Canal, the crew decided to stay through the weekend and enjoy the area.

This week the video shows Still Waters II on the waters from Boston to Cape Cod Canal.

The crew spotted several whales in the past weeks but have not got them on film, so here is a short video of a whale the crew saw a year ago.

The main activity in Maine for the last several days was waiting out the weather.  The winds have whipped the waves up to 6 – 10-feet.  There is not much fun in big waves for fair weather sailors like our crew. 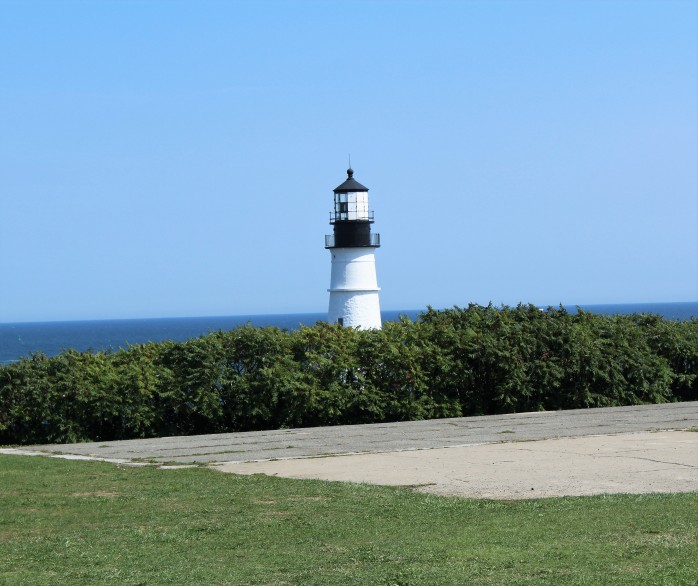 The crew did find time to go visit the Portland Head Lighthouse which is only a few miles from the marina on Labor Day.  The crew was surprised to find that the area is a very large park that includes the lighthouse and Fort Williams.

The Lighthouse sits on a large rock bluff 101 feet above the water between Casco Bay and the Gulf of Maine.   George Washington asked local masons to build the light of local materials and keep the price tag down, as the new country did not have much money in the treasury to pay for the light.  During the first session of congress, the ninth law passed in our country provided funds to complete the lighthouse.  The lighthouse was first lit January 10, 1791 making it the oldest light in Maine.

When the tower was initially completed, it stood 60 feet above the rock bluff.  However, the light could not be seen from the south due to islands blocking the view.  The masons raised the tower another 20 feet to make the light visible 24 nautical miles from shore.

The crew hoped to get a good look at the lighthouse when they cruised by the next day, but it would not turn out to be.

The winds had died off and the seas had started to calm so the crew got up this morning to cruise to Isle of Shoals.  However, they were greeted with one of those famous Maine foggy mornings.  Visibility was less than a half mile.

When the crew passed the Portland Head Lighthouse they could barely make out the light 181 feet above the water.  So much for the spectacular view from the water. 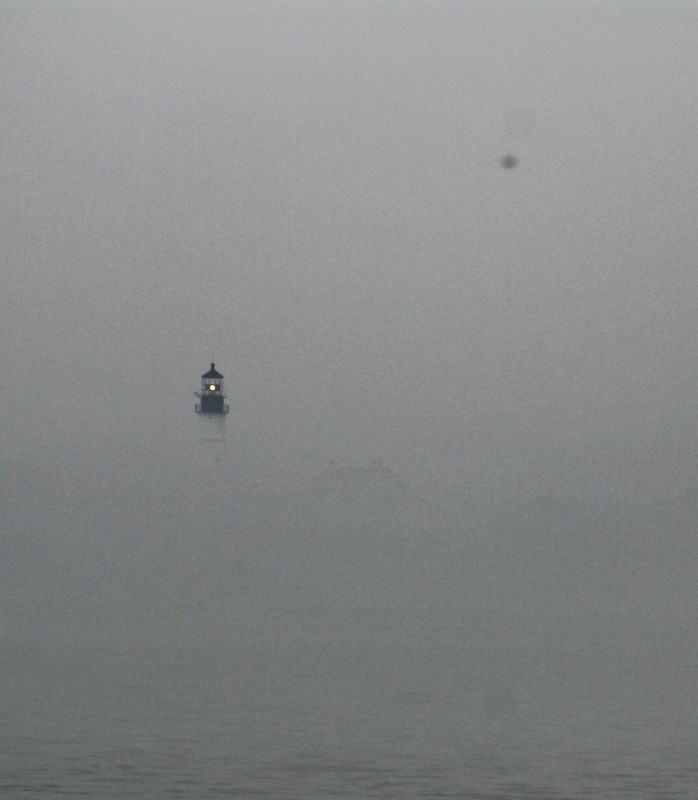 The fog stayed with the crew all day.  Sometimes the fog would lift to allow visibility to two miles, but for most of the day visibility stayed less than a mile.  To make matters worse, if the visibility did improve the rain showers would dampen the mood and keep visibility close range.  The skipper did get some practical hands-on experience using the radar though.

Then when the crew passed Boon Island Light. 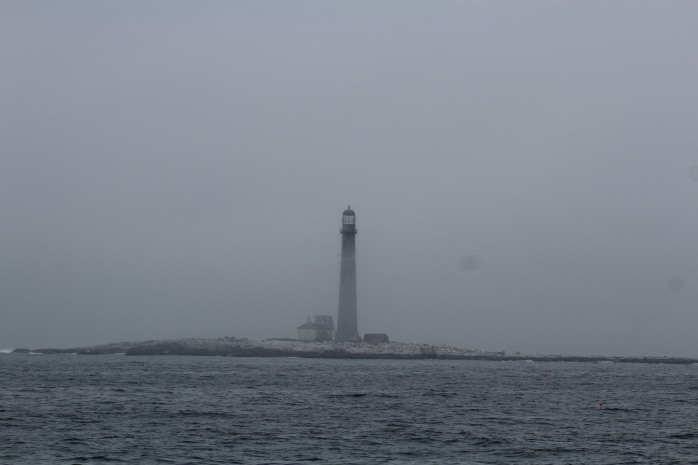 This is the only fog the crew has run into up here in Maine, and they hope it is the last.  The skipper thinks he piloted the boat twice as far as needed today due to having trouble steering a straight line due to the wind, fog, and waves.  One of the most tiring days on the water in two years.

The crew woke to a much better morning than yesterday.  The clouds are still around but the fog was gone.  The crew dropped the mooring line and headed around the Isle of Shoals Light and headed towards Boston. 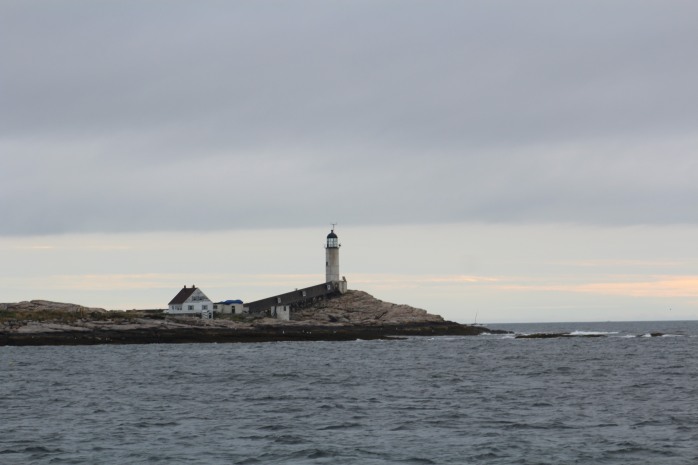 On the way to Boston the crew passed by the Straitsmooth Island Light. 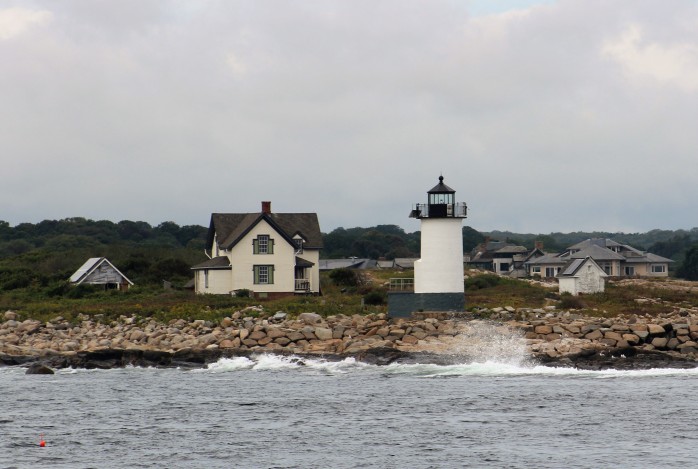 The next island was Thatcher Island which has two lighthouses about 300 yards apart.  The island is named after Anthony Thatcher, who with his wife were the only survivors off a ship wreck on the island in 1635.  Anthony watched his children perish in the ship wreck.  The courts awarded him the island as part of the settlement from the ship wreck. 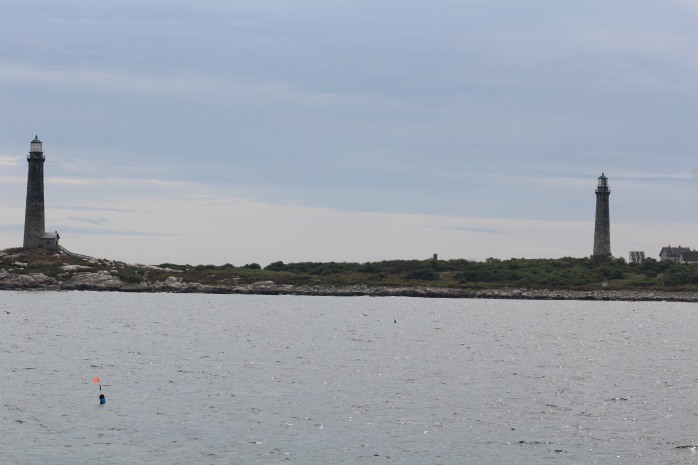 As the crew approached Boston they came up on a sailboat race that was strung out over about two miles.  There were 47 boats in the race.  The crew had to detour around the race before the final leg into Boston Harbor. 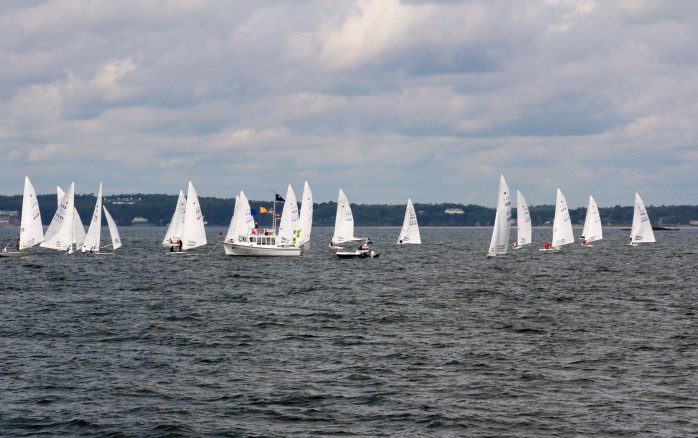 Upon arrival in Boston Harbor, the crew motored to the spot the skipper had picked to anchor.  It was obvious that the spot was not going to work due to the wind direction.  As they bobbed in the water the skipper found another anchorage with better protection from the west winds.  On the leeward side of Long Island was the perfect spot.  They had a good view of the Boston Harbor Light off the stern of the boat and a nice cliff wall beside the boat.

When the crew weighed anchor they set their sights for the Cape Cod Canal, specifically the Sandwich Marina.  The run was almost as smooth as glass as the crew continued south.  Hard to believe the difference in the sea state in just two days.  However, once they turned toward the canal they met an ever increasing west wind that started a small chop on the water.

When they entered the Canal, they met a strong 3 knot head current that pushed the boat around a bit as they tried to enter the marina.  Once inside the marina, docking was a bit tricky due to the wind.  The wind was pushing the boat away from the dock.  The Admiral managed to lasso a cleat and get the boat pulled over.  About the time the crew got the boat landed the dockhand showed up.  Better late than never I suppose.

The crew walked around and explored the town of Sandwich.  Down at the commercial docks, they watched a lobster boat unload the days catch to a refrigerated truck.  The lobster boat unloaded six containers of lobsters.  The skipper learned that each container was about 100 pounds when full of lobsters.  The skipper talked to the captain and learned that the captain has about 800 lobster pots set.  He runs about 200 traps a day.  So it takes him four days to check all of his traps.

Next stop was the Glass Blowing Museum.  Sandwich was the location of the Boston Sandwich Glass Company back in the 1800’s.  Today the factories are all gone but there are many local artist who keep the glass blowing tradition alive.  The museum has a working oven that burns 24/7 for five years at a time before being taken out of surface for inspections and repairs. 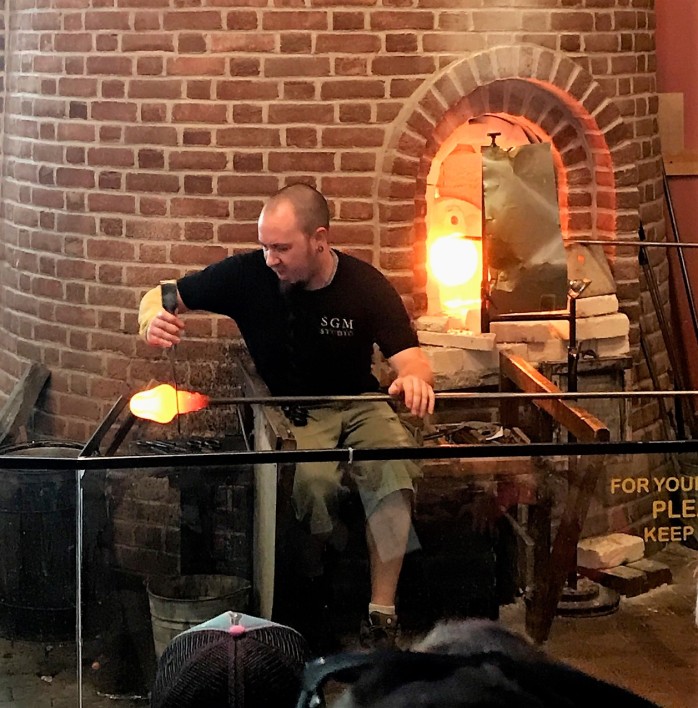 The furnace burns natural gas and keeps the glass near 3,000 degrees.  A glass blower was working and demonstrating his craft.  He made an orange pumpkin with a green stem in about 20 minutes.  Very interesting. 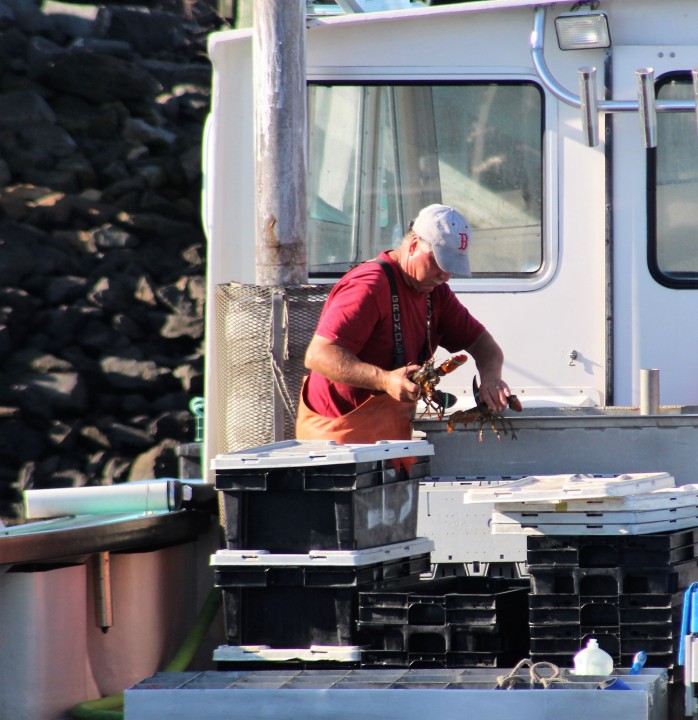 The crew will work their way back towards NYC along the Long Island Sound.  They will slow their movements to allow time for the hurricanes to blow themselves out before heading south along the east coast.