Cool weather has descended on the crew with the lows in the high 30’s most nights.  The crew has seriously started chasing the warmer weather that Florida promises and traveled 5 days:

This week’s video shows Still Waters II leave North Myrtle Beach and begin her cruise south thru the salt marsh where she encounters some duck hunters. She takes a look around Isle of Palms Marina, and concludes with a holiday fireworks display from Lighting the Landing. Enjoy!

Arriving or leaving North Myrtle Beach is always a slow go due to the number of water front homes with docks in the water.  In case you forget, there are many signs along the waterway here reminding the helmsman that you are responsible for your wake.  Consequently, the crew traveled south at idle speed (5 mph) for the first 20 miles.

After arriving in the Wildlife Refuge, the crew was greeted by some South Carolina fall color.  They also pulled into the Osprey Marina to take on fuel.  The marina has some of the less expensive fuel on the AICW, so the skipper always stops to top off the tanks when passing by.

Before they left the Wildlife Refuge they noticed a strange boat coming out of a side creek into the AICW.  The crew got a good laugh when they noticed that the boat was labeled as a school bus.  Must be a fun way to travel back and forth to school. 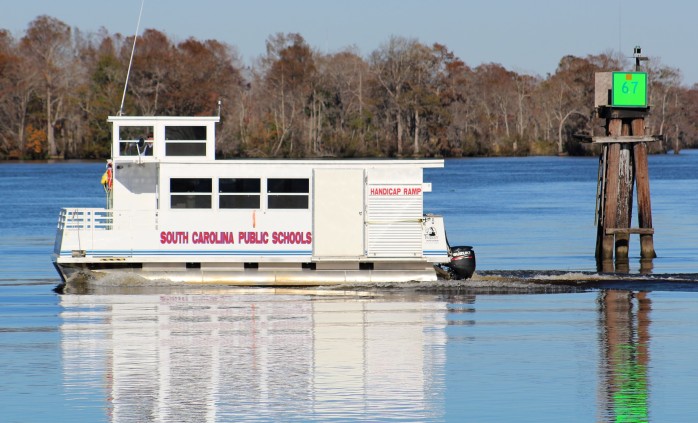 A few hours later, the crew dropped the anchor off Butler Island for a cool night.  A sailboat joined the crew in the anchorage just as the sun disappeared for the evening.  The temperatures dropped rather quickly when the sun went down.

Unwittingly, birds became the theme of the day.  The crew woke to the sounds of shotgun blasts at day break.  Who knew that duck season opened over the weekend.  Then the crew spotted the first Bald Eagle of the day sitting on a pilling just after 0900.  Then at 0935, the skipper noticed that a local boat ramp and adjoining parking lot was full of trucks and empty boat trailers.

Then around ten, the duck hunters started coming out of the surrounding creeks and heading back to the boat ramp.  When a boat passed by and the skipper noticed the number of dead ducks onboard, he decided to try a little duck hunting himself.

The skipper attempted to wave down the next duck boat he saw approaching.  His first attempt was a miserable failure.  He adjusted his tactics with the second boat that approached.  He blew the boat horn to get the duck hunters attention, pulled back on the throttle to all stop, and opened the window to wave the duck hunters down.  The boat stopped but the hunters said they did not have any ducks.  Bummer, this kind of duck hunting has turned out to be harder than expected, 0 for 2.

By this time, the Admiral had come to the helm to question why the skipper stopped in the middle of the waterway.  He quickly explained the situation and had the Admiral take the helm as the third boat approached.  This time the skipper walked out on the bow.  As the boat got close, the Admiral sounded the horn and the skipper began waving his long lanky arms.  The boat slowed down, so the skipper yelled out, “Can I buy some ducks?” 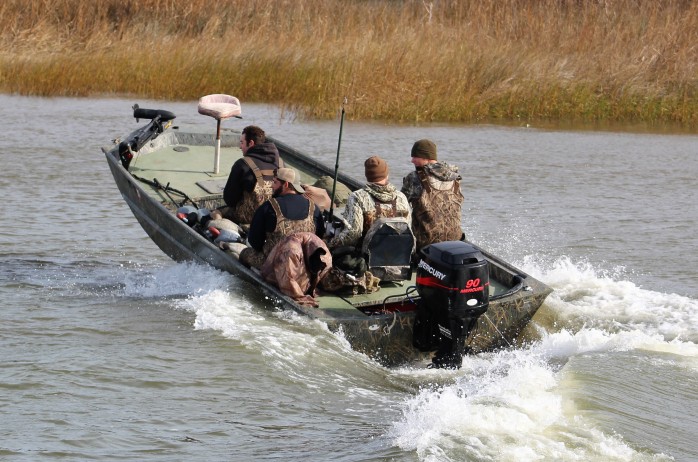 Not bad for not ever firing a shot. 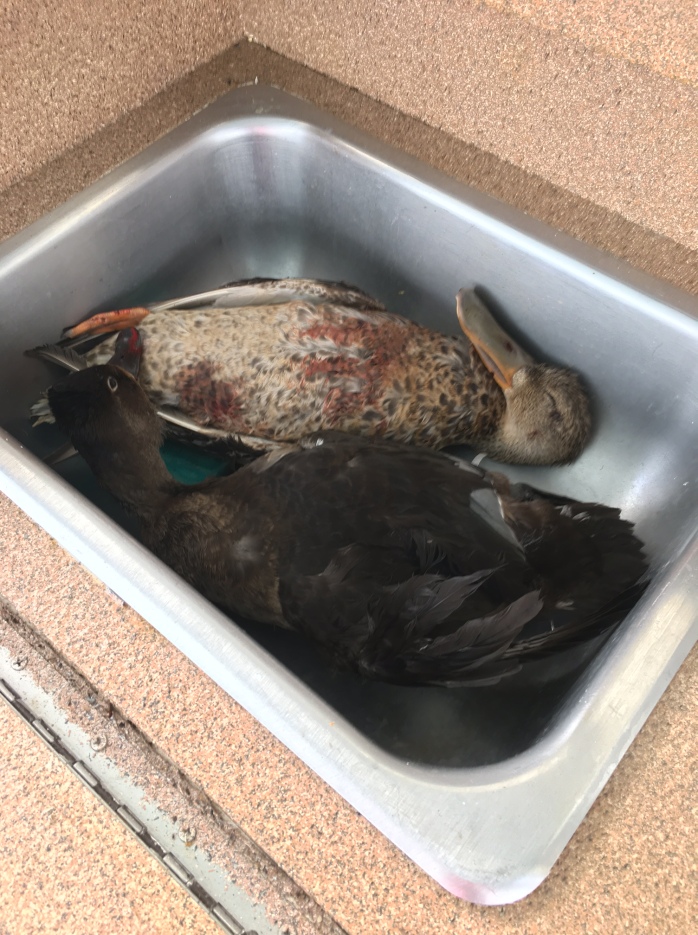 Then around 1500, the skipper spotted two more Bald Eagles just standing on the shore as the crew passed by.  One flew off before the skipper could snap the picture. 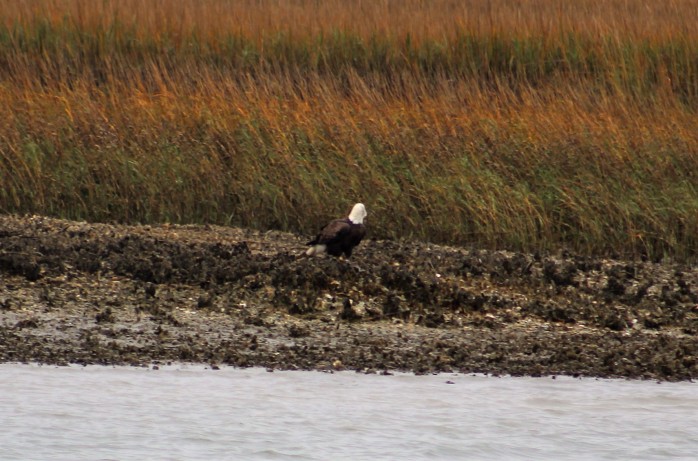 After docking at the Isle of Palms Marina, the crew walked to the beach.  They were surprised how much it reminded them of Port Aransas, back in Texas.

Low tide at the Isle of Palms Beach

The crew had planned to stay here through Thanksgiving, but the marina was full, so the crew could only spend one night.  The marina staff put the crew on the fuel dock for the evening. 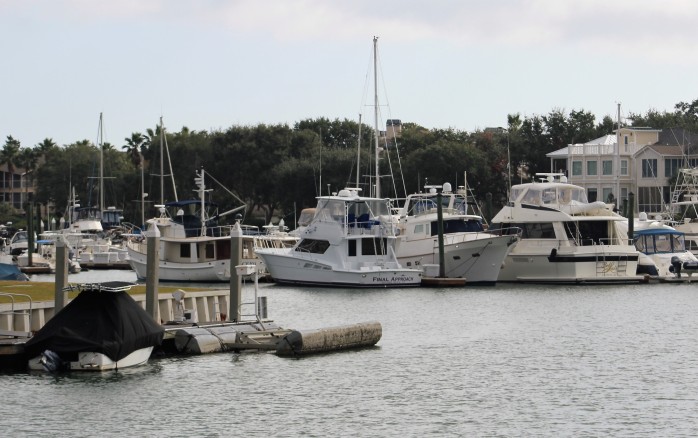 The skipper procured a spot at the City Marina in Charleston for two nights, so the crew made the 12 mile jump and arrived at the marina about noon.  After arrival, the crew walked around the historic district to gather the remaining items for the big meal tomorrow.

The Battery from the AICW: 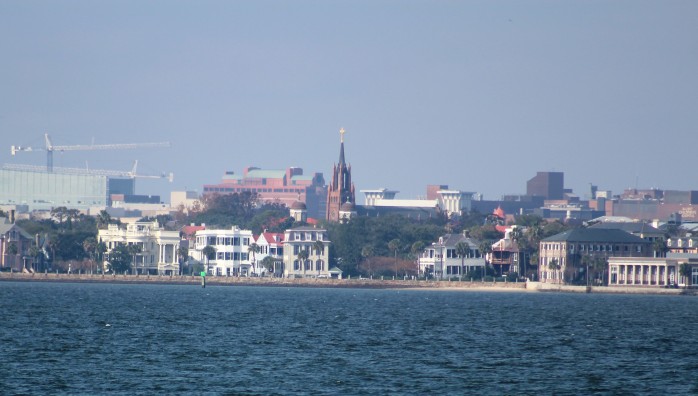 Horse and buggy tour in the historic district: 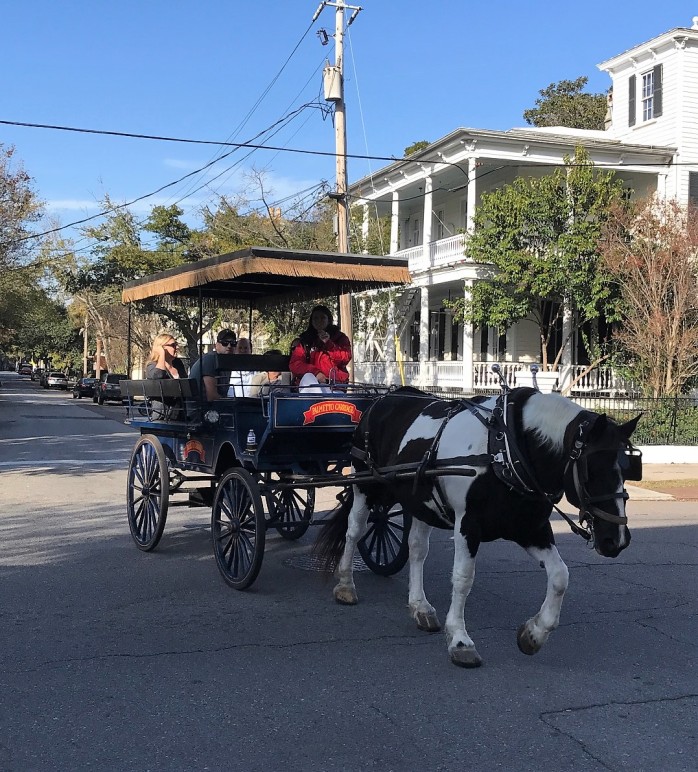 The Admiral managed to find her remaining items for Thanksgiving dinner in a neighborhood shop.  So the crew headed back to the boat.  Should be a great day tomorrow.

Not much to report other than traditional parade watching, over eating, and another Tony Romo loss on Thanksgiving Day.  Oh wait, it just looked like Tony Romo.  Dak Prescott just looked that bad.

The crew left Charleston and continued south through the miles and miles of salt marsh.  Fortunately, the dolphins would break the boredom ever so often with an appearance.  There just is not much between Charleston and Beaufort.  No wonder they call this area the low country.

At the end of the day the crew pulled off the AICW and anchored in the South Edisto River.

Signs of life at the anchor spot: 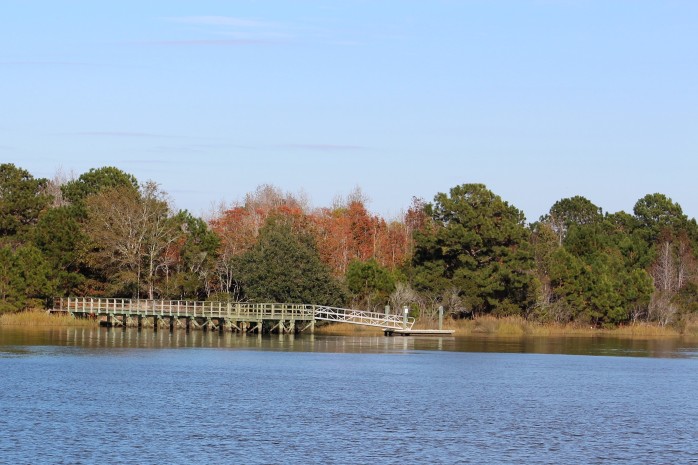 Must be the weekend because from the sounds of things, every human in these parts must be in the woods with a shotgun this morning.

The miles of salt marsh continue.

The day passed quickly until the crew reached the Ladies Island Swing Bridge.  After passing under the bridge the crew passed the Beaufort City Marina, mooring field, and waterfront homes.  This 6 mile stretch calls for No Wake and for our crew that means about 5 mph.  At the end of the No Wake Zone, the crew docked at the Port Royal Landing Marina.

After getting settled the crew took off to walk the streets of Port Royal.  They learned that the best burger in town just happens to be cooked at the marina restaurant.   When they arrived at the Back Porch Restaurant, a crowd had already began to gather to watch the end of the ‘Bama’ Auburn game and prepare for the Clemson-S. Carolina game.  The skipper quickly sized the situation up and determined that most of the folks present were rooting for Alabama.  So when Auburn started to pull away, the skipper became a vocal Tiger supporter.

When the S. Carolina fans asked him who he would root for in the next game, he replied “Clemson, of course.”  The burger lived up to its reputation, but it was time to leave before too many more Gamecock fans arrived.

The crew has decided to stop the dilly-dally pace south and get to Florida.  They should make Jacksonville easily before the end of the week where they will conclude the 2017 boating adventure.

2 Comments on “The Duck Hunt”