The crew traveled two days this past week to arrive in St Augustine for the Easter weekend. 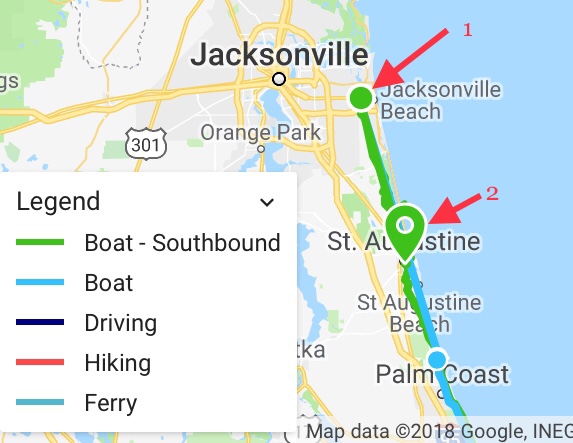 1- How many Right Whales were born in the 2018 calving season off the Florida Coast?
2- Define apocryphal and use it in a sentence. A story of doubtful authenticity, although widely circulated as being true.
3- What city holds the Guinness Book of World Record for longest ice cream sundae?

At the Box office

A short video showing someone having a bad day on the water.  Enjoy!

The plan was to cruise up to Jacksonville and spend a few days restocking the boat because there are numerous stores in easy bicycle distance to trade at. However, the weather was not going to cooperate with this grand plan. Instead, the crew decided to sit at the marina for another day to allow the 20 mph winds and all day rain showers pass them by.
While waiting out the weather, the skipper decided to read about Right Whales, or more specifically, the North Atlantic Right Whale. The Marineland Adventure had an interesting display on the whales that had stirred his curiosity. 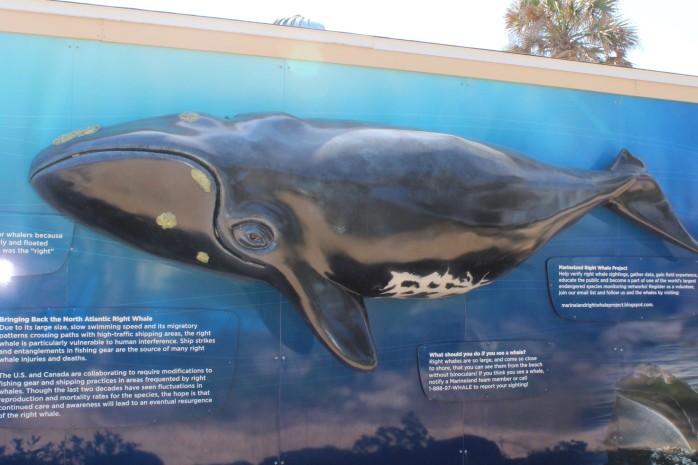 Right Whales are on the endangered species list. According to researchers who study these big behemoths, there are only 451 of these whales left as of the 2016 survey. Researchers documented 17 deaths during 2017. But more alarming for the population is that not a single calf has been spotted off the Florida Coast in 2018.

This explains why the Coast Guard makes a Right Whale warning announcement about every 30 minutes. They ask boaters to slow down and be watchful for the whales. They also ask that any spotting of a Right Whale be reported to the Coast Guard.
A popular apocryphal is the naming of Right Whales. Whalers deemed these big black whales to be the ‘right whales’ to hunt because they stayed close to shore, floated when killed, and did not shy away from boats.

It will be interesting to watch and see if these whales have the right stuff to mount a comeback. The odds are against them though. The gestation period is one year, and after birth the calf takes eight months to be weaned. The female then takes a year off before continuing the cycle. However, researches have documented that the females are only calving once every 6-8 years in the recent past. Another area of concern for their comeback is the life expectancy has dropped from 60 years to 30 years.

With the Easter weekend fast approaching, the Admiral was having grand kid withdrawals. She had bought all the kiddos Easter goodies and was eager to get them in the mail. She also ‘needed’ to call and get some FaceTime with the grandkids. So after making the 50 mile run up to Jacksonville she was off the boat and on her way to Fedex. Well, after the crew stopped at the Shrimp Shack for the Tuesday special, 30 shrimp and two sides for $9.99.  She does have her priorities.
Later that night she called the kids and learned that the oldest, Emma, had participated in a Guinness Book of World Record ice cream sundae making event in College Station. The next morning the skipper sent Emma a text to see if he could get a pic of the event for the blog. 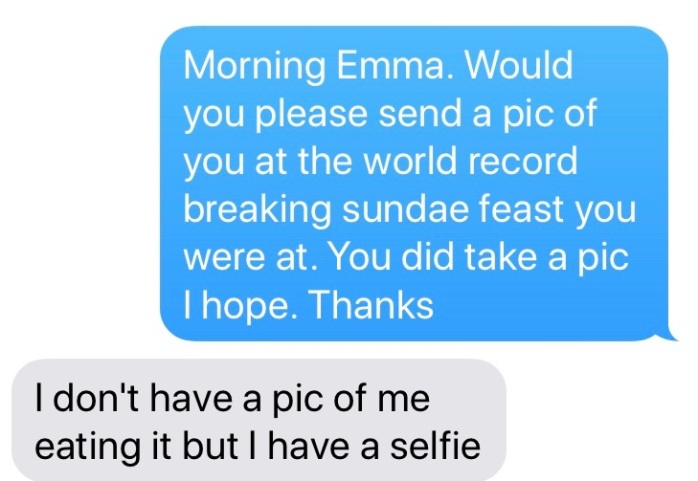 Off course you do.

The Admiral managed to buy a few things yesterday, but today was the day to restock the cupboards on board Still Waters II. She made her way two miles down the road to the local Wal-Mart where she did the majority of her shopping. While she was busy buying food, the skipper made a quick run to the hardware store three miles away. He managed to buy water hose fittings to repair a couple of hoses and some headlights that had burned out.
By the time the skipper returned to the boat, repaired the hoses, and replaced the lights; the Admiral called and requested ‘help’ to haul the groceries back to the boat. The skipper rode down to the store and loaded up his bike and packed the goods back to the boat. The Admiral went back inside to shop some more.
A while later, the Admiral called again and requested ‘help’. The skipper went and fetched this second wave of goods, and the Admiral went back inside to shop some more.
When the Admiral called the third time, she wanted to meet the skipper at an intersection not too far from the boat and transfer the groceries so she could go run a few more errands. The skipper had to arrange a different meeting place, not far from her original suggestion. He had just sat down to enjoy a nice cold Frosty at Wendy’s. Busted!
Once she arrived, they transferred the goods to the skipper’s bike and he returned to the boat. And yes, later the Admiral finally arrived back at the boat with the final load of goods.
The trip to Jacksonville was a success.

The crew shoved off the dock and headed south towards St Augustine. There is one area that the crew cruised by with multi-million dollar homes.  The home owners must be a happy bunch based on this flag the crew saw flying. 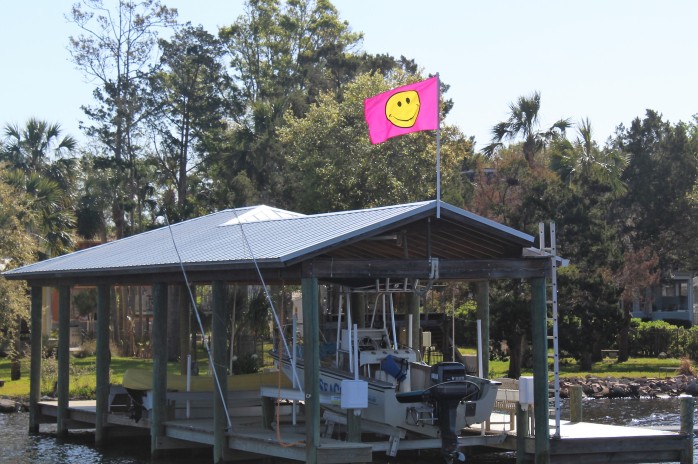 Security must be an issue though because they spotted this hamburgler on one of the docks.

The crew arrived at the dock about an hour before low tide with the wind blowing at 17 mph and the current ripping thru the marina. The skipper tried twice to dock the boat in a slip but was unable to safely guide the boat in. He opted to go out and dock at the end of the dock where he could bow into the current. A guy on a sailboat came over and helped the crew get the boat safely on the dock.

When the skipper went to check in, the dock master said that an 85 foot boat was coming in later and would need the spot that the crew landed at, so the skipper agreed to move once the current calmed down. About an hour later the current was slack but the wind was still strong. After two more tries at getting in the slip, the skipper finally got lined up just right and managed to get into the slip. The two dock hands did an excellent job handling the lines and securing the boat.

St Augustine has become one of the favorite stops for the crew on the whole Loop. Founded in 1565 by Spanish explorers, it is the oldest continuously occupied settlement within the United States. The ‘old town’ has Spanish, French, British, and American influences that make for an interesting mix of history.
To see past explorations of St Augustine by the crew, check out these links:

The crew welcomed David and Shan on board, cousins of the Admiral.

Did you know the first Mass ever conducted on American soil was at the location that the Spanish landed and named St Augustine.  The spot is commemorated by the cross on the point.

I do not know about you but my sins put him there. 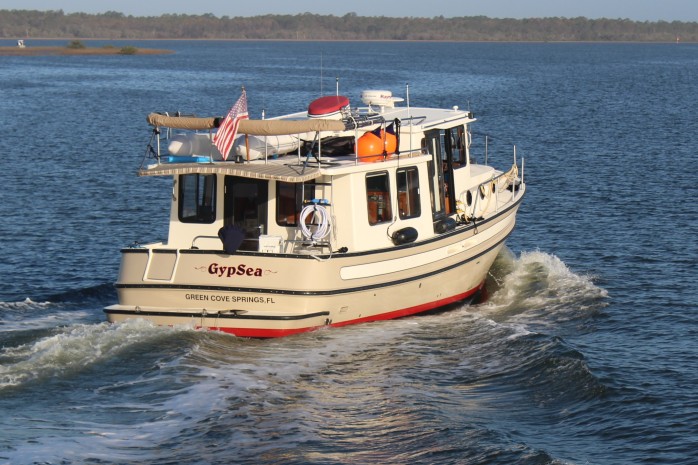 The crew will head back to Jacksonville on Thursday where they will sit a few weeks.  They will prep the boat for the Platinum Quest back around the Loop.

← up Up and Away on the Space Coast
The Old City →